First, despite international agreements, government policies and public information campaigns, forced and child-bride marriages unfortunately continue to take place in many less developed countries, especially in sub-Saharan Africa and South Asia. For example, no less than two-thirds of the women aged 20-24 years old in Niger, Central African Republic, Chad and Bangladesh were married or in union before they were 18 years old (Figure 1). 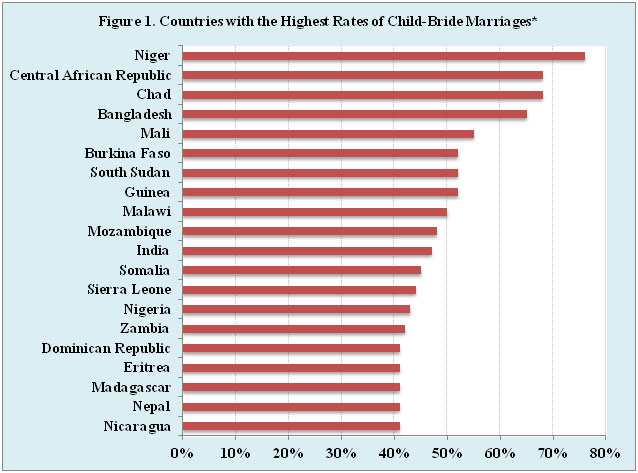 (Source: UNICEF. * The percent of women 20-24 years old who were married or in union before they were 18 years old).

Typically the family coerces the girl or young woman into a marriage or union to an older man. In many instances, the family fears unwanted behavior, sexuality and undesired relationships with men outside their ethnic, cultural, religious or caste group.

Also, parents may have made a marital promise regarding their daughter, wish to strengthen family links, desire to protect and enhance their daughter’s standing, reduce household expenditures or ensure land, property and wealth remains within the family.

A daughter who is perceived to have violated the honor of her family or has an unintended pregnancy may be forced into marriage or in extreme instances killed by a family member. Forced marriages may be abusive and intended to be a punishment to as well as a means of restoring honor to the family.

Second, spousal abuse is not limited to forced marriages and constitutes a serious challenge to a couple’s relationship. Domestic disputes, including confinement, intimidation, psychological abuse and partner violence, is a worldwide problem happening among many both married and cohabitating couples.

Globally, nearly one our three women who have been in a relationship report that they have experienced some form of physical and/or sexual violence by their intimate partner. Although some 125 countries have outlawed domestic violence, it’s estimated that more than 600 million women live in countries where domestic violence is not considered a crime.

Third, sexual relations, intimacy and love/affection constitute another area that is often challenging for couples. Dissatisfaction with sexual relations in many instances leads to emotional infidelity, extra-marital affairs, erosion of trust and separation or divorce.

One often-noted difficulty in a couple’s relationship is the woman complaining that her partner seems to want sex all the time with little attention to her wishes and the man being frustrated that his partner uses sexual intimacy strictly on a reward and punishment basis.

Those issues take on added salience as some contend that marriage implies automatic conjugal rights with a husband entitled to be intimate with his wife any time he wants and a wife duty-bound to oblige.

Fourth, decisions on whether and when to have a child, the number and spacing of children and how the children should be reared often present an important consequential challenge for many couples. Men and women may have differing views on having children, their respective roles and responsibilities in parenting and childcare and expectations and future goals for their children.

The use of contraception and abortion to limit as well as space childbearing remains a sensitive matter for couples in many parts of the world. While in many industrialized nations the woman typically has the final say in reproductive and pregnancy decisions, in many developing countries these issues remain be a contentious issue for many couples.

Fifth, another major challenge encountered by couples is the broad issue of communication. Often it is not an inability or unwillingness to understand each other, but rather simply a stubborn refusal to allow or accept the existence of a partner’s positions or viewpoints.

The lack of effective communication frequently leads to recurrent arguments, habitual bickering, lack of appreciation, detachment, unwillingness to forgive, emotional stress, and in some cases physical violence. Two toxic forms of communication frequently reported are “nagging” – a widespread complaint of male partners – and “the silent treatment” – a common complaint of female partners.

Sixth, finances or money is an often-reported major challenge that couples face in their relationship. Many couples quarrel over budgeting expenses and savings, their partner’s income, differing spending styles and inheritance issues. Invariably, one person in the relationship, usually the male, tries to control the resources, restrict the spending of the other and make the major financial decisions.

Seventh, harmonizing employment, careers, togetherness and work-life balance is increasingly a difficult challenge for many couples. With the spread of the two-career couple and nuclear family, the roles and responsibilities of men and women in a marriage or relationship have changed, differing considerably from those even in the recent past.

The lack of equality in a relationship and mutual respect for each other’s work and career may lead to resentment, stress and unhappiness. While working wives reduce the financial burdens for spouses, their employment may weaken the husband’s traditional authority in the family.

Also, wives and female partners who work outside the home and have with husbands or partners who are frequently not around are likely to be dissatisfied with the usual division of labor in the household as they find themselves doing more than their fair share of domestic chores and familial responsibilities.

Eight, many couples are challenged by a partner’s personal shortcomings, misbehavior and dysfunctional habits. Addiction, substance abuse, alcoholism, promiscuity, jealousy, domineering, lying, and narcissism are some of the serious issues that jeopardize and weaken a couple’s relationship.

When one partner feels the other is immature, irresponsible or untrustworthy, the relationship or marriage is likely to suffer, undermining affection, attraction, cooperation and fidelity. The difficulties become exacerbated when the partner resists seeking outside assistance or heeding needed remedial measures.

Ninth, unfulfilled and differing expectations of marriage or an intimate relationship are another major challenge for couples. Women and men typically have different understandings, needs and priorities regarding marriage, love, romance and the nature of intimate relationships.

Unrealistic expectations when entering marriage and relationships are not uncommon, especially among the young and immature women and men. Disappointments, unmet promises and boredom can arise in a couple’s relationship, especially after a number of tedious and uneventful years.

Tenth, for many couples and marriages dealing with in-laws can be a burdensome challenge. Achieving the right balance and rapport with the parents of ones partner can have significant consequences on the stability and well-being of a couple’s marriage or relationship.

Given individual histories and personal viewpoints, couples may find themselves strongly disagreeing about the appropriate amount of time, care and assistance to be provided to in-laws. Those issues become even more complex in cases of second marriages, blended families, ex-spouses and the rearing of children and grandchildren.

In many instances difficulties with in-laws originate between with the wife and her husband’s mother. This is frequently the case, especially in patrilocal communities, because both are competing for the husband’s attention, dedication and support in family and domestic matters. As one wife has tersely noted, “Our marriage has three people … me, my husband and his mother.”

No doubt some will disagree with the above-enumerated ten major relationship challenges facing the world’s two billion couples and may propose different key challenges. However, nearly all would agree that couples in virtually every part of the world encounter significant challenges and difficulties with their spouses or partner at various times in their relationships.

Those challenges, which may range from minor annoyances to serious offenses, have generally been viewed as personal matters to be worked out by the couple. Modern societies, however, have vital interests in promoting strong and harmonious relationships of couples and marriages, supporting family formation and childrearing, ensuring the basic human rights, dignity and security of both women and men, and protecting the welfare of children.

As one adage has discerningly affirmed, “Peaceful family, prosperous country”.

(Joseph Chamie is an independent consulting demographer and a former director of the United Nations Population Division).