JNU ABVP Members Resign, This Is What They Have To Say

NEW DELHI: As the controversy over the arrest of Jawaharlal Nehru University Student Union leader Kanhaiya Kumar plays out, a few office bearers of the Akhil Bharatiya Vidyarthi Parishad (ABVP) have resigned. The ABVP, which is affiliated to the ruling Bharatiya Janata Party (BJP), was instrumental in the action against Kanhaiya and other JNU students, accusing them of organising ‘anti-national’ activities where ‘anti-national’ slogans were raised at an event to mark the hanging of Afzal Guru.

In a speech made before his arrest, Kumar unequivocally condemned the slogans -- a fact that has been pointed out by those who have criticised the government’s response to the incident.

The statement by the ABVP office bearers who resigned is reproduced in full below. This statement was posted on Facebook by Pradeep Narwal.

We, Pradeep, Joint Secretary, ABVP JNU UNIT, Rahul Yadav, President SSS ABVP UNIT and Ankit Hans, Secretary SSS ABVP UNIT resigning from ABVP and disassociating ourselves from any further activity of ABVP as per our difference of opinion due to the following reasons:

2. Long standing difference of opinion with party on MANUSMIRITI and Rohith Vermula incident.

Anti-national slogans on Feb. 9 in university campus were very unfortunate and heart breaking. Whosoever responsible for that act must be punished as per the law but the way NDA government tackling the whole issue, the oppression on Professors, repeated lawyer attacks on Media and Kanhaiya kumar in court premises is unjustifiable and we think there is a difference between interrogation and crushing ideology and branding entire left as Anti-national.

People are circulating ?#‎SHUTDOWNJNU? but I think they must circulate?#‎SHUTDOWNZEENEWS? which has demeaned this world class institution, this biased ZEE news media generalize and related the act done by few people to the whole student community of JNU. JNU is considered as one of the progressive and democratic institution where we can see intermingling of people from lower to upper income strata of the society, notion of equality.

We can’t be mouthpiece of such a govt. which has unleashed oppression on student community, legislature like O P Sharma, govt. which has legitimized the action of right wing fascist forces either in Patiala house court or in front of JNU north gate. Every day we see people assemble at front gate with Indian Flag to beat JNU student, well this is hooliganism not nationalism, you can’t do anything in the name of nation, there is a difference between nationalism and hooliganism.

Anti-India slogans can’t be tolerated in campus or any part of country, JNUSU& some left organization are saying that nothing has happened in the campus but here we want to stress that veiled persons in the event organized by former DSU persons shouted slogans BHARAT TERE TUKADDE HONGE of which there is concrete evidence in videos, so we demand any person responsible for the slogans should be punished as per the law, and in this whole process we also condemn media trial which has culminated in Anti-JNU sentiments throughout the country. Today we all must stand together to save JNU which has given us identity, we need to come across party lines to save reputation of this institution, to save future of JNUites as more than 80% of students don’t belong to any political party so let’s unite to save this JNU culture. 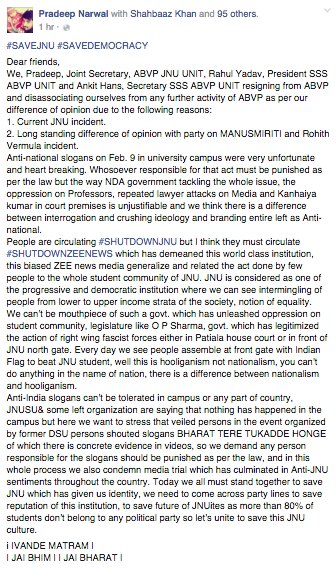 The comments on Pradeep’s post have been largely positive. “Proud of you dear Pradeep, this is a courageous, self-critical step, according to the democratic ethos of JNU,” said one commentator.

“That's the Spirit brother. No matter what our ideologies are, this time we are standing to Save JNU... smile emoticon,” said another.

“Bhai, a commendable move!!! No words to describe your rational choice, a move which is not skewed or biased as it happens to be whenever someone wears an ideological blinders!!! smile emoticon...Proud of you man!! I will offer you tea!! smile emoticon.”