Emergence of Aggressive Nationalism in India

NEW DELHI: Nationalism is the belief that your country is superior, without question or doubt. In some cases, nationalism can inspire people to break free of a foreign oppressor, as in the American Revolution, but nationalism can also lead a country to cut itself off from the rest of the world.

In the past few years, especially after the landslide victory of BJP and PM Modi, the nationalism debate in India has been colored by ‘Hindutva’ politics. The essence of secularism is being lost, with the recent Dadri lynching episode revealing the obnoxious side of communalism in India.

Historian Romila Thapar has explicitly mentioned that ‘Nationalism is not just limited to flying flags on official buildings and singing the glories of the nation symbolised as a mother. Nationalism was a deep commitment to the identity of a people, most of whom came together to expel the colonial power.’

It has become a convention to brand the ‘other’ as an ‘anti-national’ with the politicians, lawyers and journalists emerging as a self-righteous mob, imbued with a ‘hyper-nationalist’ pride. C P Surendran has rightly quoted ‘The Right wing idea of nationalism doesn’t speak of a confined territory and a unified market. It looks at inflationary, fluid boundaries, and a monolithism of beliefs and culture; and Hindu supremacism. It is no use saying the Middle East kingdoms are meant for Muslims. Why not India for Hindus? The Middle East kingdoms for the most part are also led by kings. We can’t obviously go back to the regalia, or can we?’

There is a false binary being constructed that ‘anti-nationals’ versus the ‘martyrs and soldiers of India.’ It is completely irrational verbatim, which tries to superimpose the ‘Idea of India’, which is fabricated on hyper-nationalistic ambitions. For example, a minister in the BJP government General VK Singh, said: “You consume the nation's foodgrains, reside in the nation and get education here. If after that you abuse the nation, then you are traitor.” Such kind of dialectics tries to dominate over the ‘Right to Dissent’ or the ‘Right to Debate’ which is very important in a vibrant democracy. 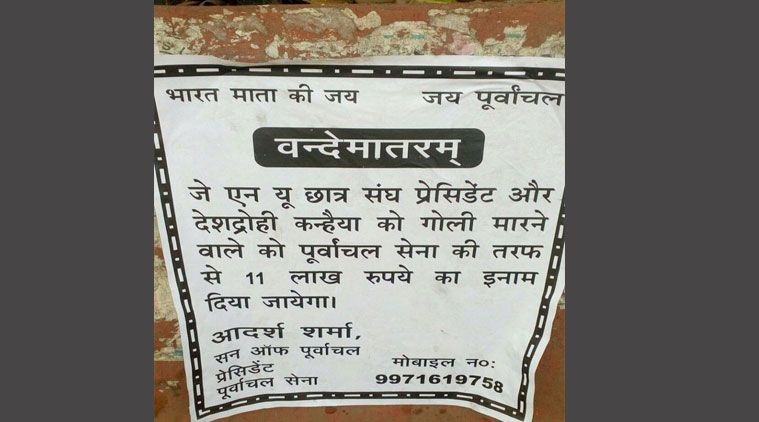 Replying to a question, the JNUSU President Kanhaiya Kumar who was charged on the draconian charges of sedition and criminal conspiracy bluntly stated “I am against patenting of nationalism and the concept of Akhand Bharat propagated by ABVP and select sections of society.”

What we are witnessing now is the emergence of aggressive nationalism in India, which is baseless and very deluding. It endows greater voice and strength to people who have a mob mentality, ready to harass others with odious comments for the sake for defending the image of ‘Mother India’, in the process demeaning their own identity. The manner in which JNU had been ‘othered’ as an ‘Island of Dissent’ is very traumatizing, painting all the students of the campus in an ‘anti-national’ rhetoric. Any form of dissent is given so much of importance, creating a hullabaloo as if the ‘India of India is very fragile’.

Pratap Bhanu Mehta has rightly stated ‘Do you love India? In my context, these questions seem more like an affectation than a threat. But these questions are taking a menacing and accusatory form, driven by the language and imagery reminiscent of the Weimar Republic — of a nation infested with anti-nationals that needs cleansing. The real threat is not posed by anti-nationals, it is by the drive to see anti-nationals everywhere.’

The ultra-nationalists have to remember that we are not a fascist country and every Indian citizen has the right to free speech and expression, until it does not rebuke the other person. It is growing very claustrophobic to live in an India which is so integrated with the ‘Right wing ideology’ that questioning it becomes sedition or a criminal conspiracy. Even those with free thought are not being labeled as ‘left intellectuals’, which is not necessary, just because they do not adhere to the main line of thought. This form of nationalism can be very dangerous as its boastful and mushrooming with a lot of pride.

It is a tough time for vibrant Indian democracy, which has been for years, the cradle of so many civilizations and diversities. This mob mentality should be controlled, otherwise India’s intellectual acumen would be lost in the crowd, who are just following the ‘herd-mentality.’

(The writer is a doctoral student at JNU, New Delhi)

Digitizing to Dystopia 19 hours ago

Mandapam, a Safe Space for Sri Lankan Tamils 19 hours ago