The Bitter Truth of Suicides in Higher Education in India

Globally, the rate of suicide has seen an upward trend in past decade and India is no different a story. Suicide tops the list in leading causes of death among 15-29 years old but for accidents. As one WHO report reflects a gloomy state of affair wherein one death by suicide was cited every 40 seconds in the year 2012. In India, 20 students kill themselves every day according to the National Crime Records Bureau (NCRB) report in 2014. It would be worthy to take a while here and think the number of cases highlighted every year versus the real statistics. Suicide is a much bigger evil in our society than most people comprehend it to be.

The causes for suicide have been attributed to various psychological, biological and environmental factors. Strong correlation between low educational achievement, examination / school performance stress and suicide attempts among young adults have been identified by many leading psychologists globally. It should also be noted that while globally speaking, the reasons to this distress among students have been identified as – the impact of the recession, financial worries, an increase in student numbers, family breakdowns, excessive alcohol consumption, etc, further scrutiny of the data for individual countries has revealed differences both in suicide rates and in the ranking of leading causes of death. These differences seem to be due to social, cultural and other factors, which call for further investigation.

Data released by the NCRB said that as many as 69.7% of those who committed suicide had an annual income of less than Rs 1 lakh while one out of every six persons who took the extreme step last year was a housewife. If we study the trends carefully given by NCRB, it can be said that while most categories (profession wise) show decline over time, private sector employees and students in India are reporting higher suicides. 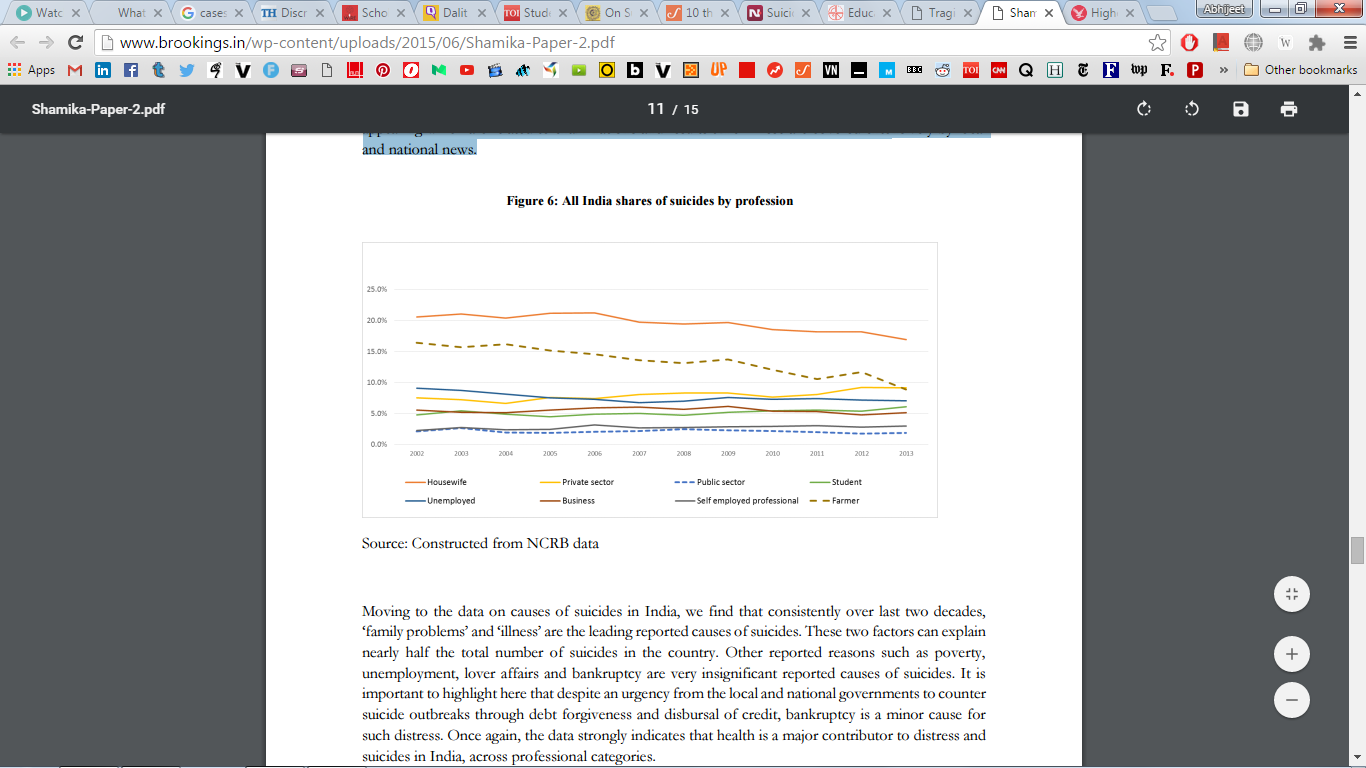 However, as the title of Mark Tully’s –A veteran BBC journalist, book titled, ‘No Full Stops In India’, ominously suggests a penchant for taking things way too far for repair. Add to it, the malicious attempts by the government/government appointed administration and media to moral police the society, further worsens the situation. While, ideally the Government and Media should maintain a degree of friction, there is a rising trend where the various governments have been governing by managing news headlines rather than headlines being governed by actual governance, which cannot possibly be healthy for our society.

In lieu of the recent outrage over rising discrimination and insensitivity by universities authorities, shameless politics over deaths, and the public prosecution during irresponsible media trials, following might be the questions that come to our mind:

The Answer to all these questions is a big tragic YES. Let’s take a look.

Is discrimination in higher education in India a real problem?

There is a notion that our educational institutions are caste neutral. However, if we care to delve deeper, casteism comes across as an attitude problem, either from department heads or from authorities who represent these institutions. Usually the determinants of caste, religion or region are read through language, lack of or command over English, submissiveness , articulation, regional or urban nature, mode of dress, complexion. While most students overlook the bigotry of individuals, others are driven to the edge in the face of systemic ridicule. In only the last decade, ten suicide cases have come to light from Hyderabad University alone.

The former chairman of the Press Council of India, Markandey Katju, notes on his Facebook wall, "Most non-Dalits look down on them as sub humans, and often taunt, humiliate and victimize them. This is a national disgrace. Unless this feudal mindset is destroyed our country cannot progress.”

Are these highlighted suicides as intrinsically connected to India’s power structure as shown by media?

Unfortunately, the vice-chancellors and university administrators believe they are accountable to their appointing authorities in centre, whereas their actual accountability is to students, and beyond, to society.

Not too long back in the wake of a spate of cases of suicide by students from EFLU Hyderabad and University of Hyderabad, the Andhra Pradesh High Court, in April 2013, had taken suo motu cognisance of a newspaper report and directed the universities to take measures to address the possible causes, and yet today, here we are.

At that time, a group of 29 academicians, in a petition to the court, identified failure, fear of failure, administrative indifference, hostile regulations, insults, social and academic stigmatisation and rejection as some of the reasons for suicide by students from marginalised groups. Clearly the law failed.

Is our fifth estate guilty of propaganda over real news?

An essay on University World News opines, “India probably has more newspapers than the rest of the world (around 70,000 newspapers are published in India) and the highest number of TV news channels (80). The job of the news channels seems to be to regurgitate what other media have said or to spin the story by creating unsubstantiated debate.”

A stronger media sector leads to greater government accountability. The rigorous dip in professional ethics of journalists in India today is more saddening than ever. Irrelevant questions, irresponsible presentation of facts and statistics, medieval way of public prosecution, moral policing, the unethical TRP race, and biases are bound to have a strong impact on a society like ours where the TV penetration is 61 percent and has an industry value of INR 500 billion.

“The media reacts to stories too late rather than reporting them in a responsible manner, creating noise and asking irrelevant questions rather than following them up at an earlier stage? Why was this story not followed up by any media outlet from August 2015 to the middle of January 2016, until the suicide happened?” adds Ranjit.

Is it a case of 'justice delayed is justice denied' in India?

If the judiciary was easily accessible and affordable to India’s masses, such conflicts would definitely have been better handled. One recently retired Supreme Court judge of India estimated that it would take 360 years to clear the 33 million pending cases in India’s courts, assuming no new cases come up.

In 2013, the Supreme Court had admitted that the Indian judiciary was ignoring the common man while giving priority to rich, powerful and influential people in hearing cases - and said some serious introspection was called for in this regard.

There were 65,000 cases pending in the Supreme Court, a total of 42 lakh cases in high courts and a staggering 2.9 crore in trial courts then. The famous Tihar jail was crampling with 13,253 prisoners - more than double its capacity of 6,250 inmates that year. According to the prison's spokesperson Sunil Kumar Gupta, 75 per cent of the inmates were under-trials, many of whose appeals are yet to be heard.

All this has lead to a discord between those who govern and those who are governed, flashes of which are eminent in a number of cases. At this point, it becomes imperative, especially amidst ‘Make in India’ campaign where we are to be the world’s soft power, that all parties take a step back and introspect. The actions we take today will decide how the world looks upon India, after all we gave the world the principle of ahimsa.