School Students In Gujarat Given 'I Love Modi' Pens

NEW DELHI: If you thought schools were not meant for political indoctrination, then you probably missed the news earlier in March this year that CBSE directed schools to encourage students, staff and even parents to download the ‘Narendra Modi mobile app.’ If that weren’t enough, schools in Gujarat have gone a step further, and according to reports, are handing out “I love Modi” pens to students writing the Class X and XII exams.

The pens, packed oh-so-predictably in saffron, carried a picture of the Indian Prime Minister and the lotus symbol of the Bharatiya Janata Party. 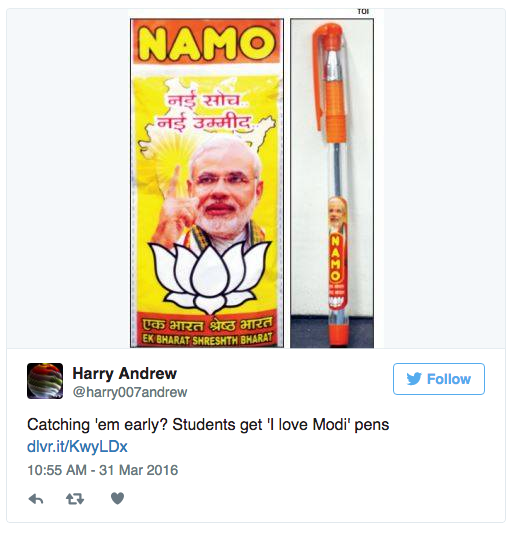 According to The Times Of India, school principals in Ahmedabad reported that they had received packages containing 5-10 packets of NAMO pens and each packet had five pens. The pens were accompanied by a covering letter from the company claiming that they had sent the pens for distribution among students as gifts after taking the consent of the chairman of Gujarat Secondary and Higher Secondary Education Board (GSHSEB) R J Shah, and deputy chairman R R Thakkar. 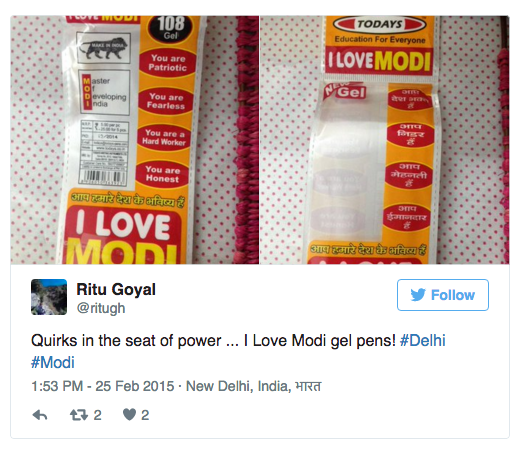 However, not everyone is happy about the pro-PM pens. "This kind of politicization of exams has never been allowed. The pens came packed with a big image of the party symbol as well," a principal of an Ahmedabad-based school told TOI.
Congress spokesperson Manish Doshi said that there are over 50,000 vacant posts of teachers in schools. "Instead of making efforts to give quality education, the BJP is allowing politicization of the education system. It is shocking that the board allowed such blatant politicization of school exams," Doshi told the paper.
According to the same report, however, board authorities hadn’t given the necessary permission for the pens. The pen company had approached us some five months back with the proposal but we had refused since it involved the use of a political party's symbol," said RR Thakkar.
The company in question disagrees. As TOI states: Suresh Zaveri, head of the promotional activities of 'Todays' pens in Gujarat, said that their company had distributed 1.50 lakh pens with 'I love Modi' message among students in Ahmedabad, Gandhinagar and Vadnagar. "We came up with this idea three years ago, when Modi was Gujarat chief minister. We first went to him to show him samples of the pen. He liked our idea and gave his permission to distribute the writing tool," Zaveri said. He further claimed that he had met state ministers, including education minister Bhupendrasinh Chudasma, the Gujarat Secondary and Higher Secondary Education Board (GSHSEB) chairman A J Shah, and also deputy chairman R R Thakakar before distributing the pens. "We were provided a list of schools by GSHSEB office-bearers," Zaveri said. 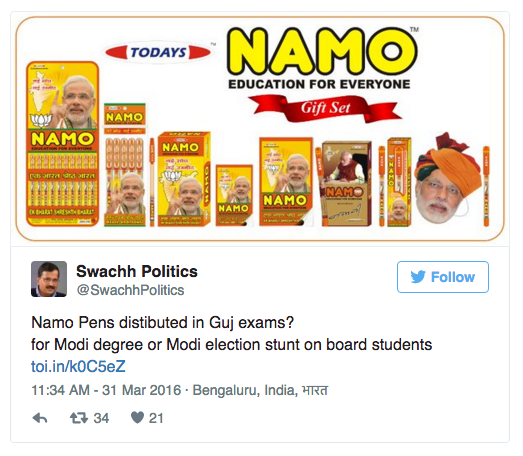 The mixing of politics and schooling was criticised earlier as well, when CBSE asked schools across the country to encourage students, staff and parents to download the ‘Narendra Modi mobile app.’
"All School Heads are requested to encourage their students, teachers and parents to download the app, and share their experiences on how to overcome the stress of taking examinations," the CBSE notification said.