NEW DELHI: In one speech, Prime Minister Narendra Modi first hit out at West Bengal Chief Minister Mamata Banerjee for politicising death regarding the Kolkata flyover collapse, and then did the exact same thing himself.

Referring to the bridge collapse in which 24 people were killed, the PM said: "The flyover collapsed, such a big tragedy; if some chief goes what does he or she do; they try to save people, assist in rescue work. But what did Didi (Banerjee) do? The first thing she did was to declare that it was the Left Front that gave the contract (for the project).”

"Forget Left or Right, think about those who are dying, Didi," PM Modi said, referring to the 31 March Vivekananda flyover collapse in Kolkata. "At least give respect to the dead; but for Didi, it's the chair which is only visible and not the dying people…. Look at the shamelessness; it was such a massive tragedy but she started a blame game," the PM said.

"I want to ask Didi, if this flyover would have been completed and while inaugurating it, would you have said the contract was given by the Left? No, you would have taken the credit for it. Now that it has collapsed, you are blaming others. This is all part of your business of money and death," the PM said at a rally in Alipurduar.

In the same speech, the Prime Minister seemed to have forgotten the allegation levelled against the Trinamool Congress leader of playing politics over tragedy -- as he said that the bridge collapsing was a message from God to the people of West Bengal to not vote for the TMC.

"It is an act of god in the sense that it happened during election time so that people may know what kind of government she has been running. God has sent a message to the people - that today this bridge has collapsed, tomorrow she will finish off entire Bengal. God's message to you all is to save Bengal.”

The PM took on the West Bengal Chief Minister on a host of other issues. "I wonder what kind of chief minister is she. Whenever the central government calls a meeting on important subjects, where all the states can put forth their issues and demands, she has always skipped them because those meetings are called by Modi,” PM Modi said, hinting at Mamata Banerjee’s closeness to Congress leader Sonia Gandhi. "She doesn't come to Delhi to attend meetings called by Modi. But whenever she comes to Delhi, she never forgets to meet Sonia Gandhi," he said.

Twitter was quick to react to the PM’s words, with several commentators pointing to the fact that the PM seemed to be doing exactly what he accused the TMC leader of doing -- politicising death. 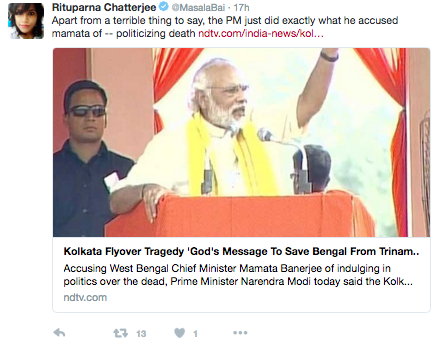 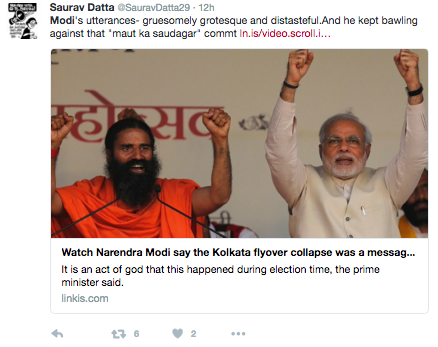