Research has helped advance the understanding as well as treatments for psychiatric and behavioural disorders; however, resources and services dedicated to the same have remained disproportionately low. Silence on ‘mental health’ has led the world today to battle an increased incidence of Schizophrenia, Depression, Epilepsy, Dementia, Alcohol dependence and other mental, neurological and substance-use (MNS) disorders.

Considering the mental health needs and the glaring treatment gap that exists, it is imperative for policymakers and medical community to shed their preoccupation with curative health care services and disease prevention, and pay equal attention to building a socially and mentally healthy society. 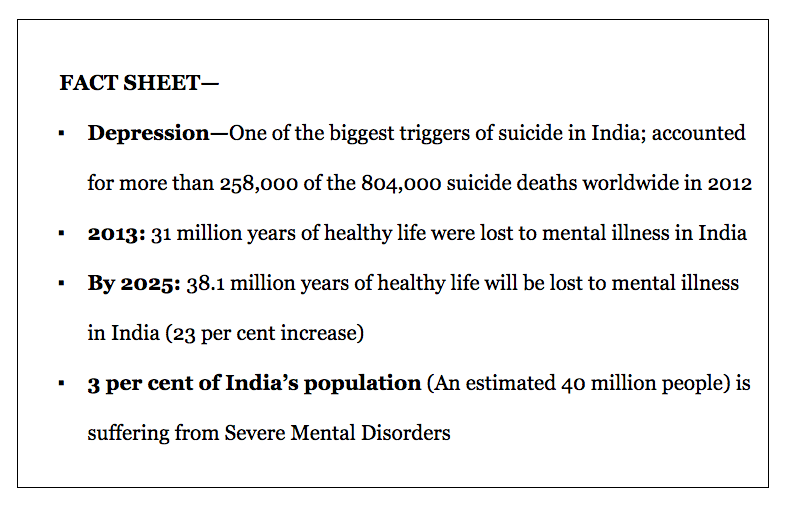 This transition has not been subtle, but starkly visible in its varied forms. An analysis published as part of a series, in the journals The Lancet and The Lancet Psychiatry, has drawn on its years of medical surveys in the world’s two most populous countries, India and China— and has concluded that there exists not just a lack of effective treatment but also, a society-ridden stigma attached with these disorders. Investments have lagged far behind, with both India and China, at the brink of epidemiological and demographic transition; spending less than 1 percent of their total medical budget on mental health.

Sociologically, as Indians, we are well-aware of stigmas attached but what fails to be understood and realized, is the concept of ‘welfare state for all’ has taken a complete backseat amidst the chaos of ridiculing and giving unnecessary importance to these stigmas. Tragically, lack of awareness severely disables the treatment, paving way for worst forms of human rights abuses to take place.

World Health Organization’s (WHO) report on suicides (2000-2012) had put India right on top of the list in Southeast Asia. This trend definitely has a story to tell—lack of support system for people fighting with a host of negative social tendencies leading to their cries going in vain.

Battles of the System

India has a total of 443 public mental hospitals cornered in the Southern and Western parts of the country, while the population of 56 million people residing in the Eastern and Northern belt are significantly left out of the ambit of a proper infrastructure in place. Distance thus, increases the inequality of access to proper treatment, with major disruptions in family life, and excessive pressure on monetary conditions. There is an increasing need for more allocation of funds for modernization as well as allocation of spaces in hospitals. Naturally, providing mental health facilities to the rural population is indeed, a mammoth task requiring infrastructural, architectural, and programmatic correction.

Lack of political will and trained human resources, sociocultural barriers, financial restraints and insecurity, discrimination and lack of realization of the implications of ‘poor mental health’ have translated into a substantial rise in the rate of suicides. Setting up small mental health care facilities in various communities (rural as well as urban) will lead to an increase in community engagement, reinforcing an inclusive ecosystem for speedy recovery of the patient (Rehabilitation + Recovery + Reintegration) while also invoking a sense of social responsibility in the people.

The Age of Allies

A new cadre of community health workers to address mental disorders along with doctors of primary health care centres being trained in basic psychiatry (high demand in rural areas) can work wonders for arresting the dearth of psychiatrists in the country. Armed with correct diagnostic skills, these practitioners can- not only identify and manage the problems in its early stage, but also educate the family and sensitize the planners incorporating elements of decentralization, de-professionalization and active community participation. Medical practitioners with their training modules can work on building the capacity of ASHA, Aanganwadi workers, local practitioners as well as caregivers and relatives of the patient.

The lack of recognition and awards has led to less number of mental health professionals in the country. While MOOCS and certificate courses can be taken up on a pilot basis, inclusion of Mental Illnesses in Universal Health Assurance Mission (UHAM) can put forth a clear message of taking it up as a profession in the future. Collaboration with alternative and traditional medicine practitioners (especially in rural areas considering people’s faith in them) as potential allies, can also prove to be the key to providing more accessible, affordable and acceptable mental health care.

Although, various NGOs and civil society groups have taken a centre stage in providing services and helping people who are unable to afford the treatment, they are restricted geographically as well as financially. They not only lack the support of the administrative machinery but the quality and the continuance of their services is also a matter of concern. However, if their efforts are recognized and their experiences valued, these organizations can become a repository of knowledge, help extend better services and help in spreading awareness inclusively.

State should put in systematic efforts to develop visual public health education materials and involve famous personalities, teachers, as well as educate students on the importance of mental health for one’s well-being and the development of our country. Although, it may take a while to mainstream the psychiatric and behavioural disorders in our thought process, this is the only way through which we can ensure bottom up approach and community ownership of the related larger issues at hand.

Recently, Prince William, his wife Kate and his brother Harry launched the ‘Heads Together’ campaign and have urged Britons to ditch their prejudices about mental health. This is a remarkable step taken by the Royals proving that ‘talking’ is indeed a good solution and can be taken forward in significantly strengthening the social fabric.

The burden of mental health problems coupled with the huge treatment gap in India, and violation of human rights of individuals living with these disorders makes for a compelling case for working on a robust policy framework to invest in, expand the coverage and improve the quality of mental health services in the country. The correct time is now- to take up the draft Mental Health Care Bill, which has been languishing in Parliament for a long time, and aggressively nurture the fertile ground to initiate efficient delivery and formulations of various policy initiatives that will mark a departure from decades of failed promises.

The time has now arrived— to shed the burden of ‘mismanagement’ to ‘effectively managing the mental wealth’, and implementing National Mental Health Policy, both in letter and spirit.

(Shreya Kumar is an independent researcher).