How The World Reacted To Muhammad Ali's Death

NEW DELHI: “I am America. I am the part you won’t recognise. But get used to me – black, confident, cocky; my name, not yours; my religion, not yours; my goals, my own. Get used to me,” Muhammad Ali famously said. Ali died aged 74 on Friday, a day after he was admitted to a Phoenix-area hospital with a respiratory ailment following a long battle with Parkinson's.

Over the weekend, news almost came to a standstill as an outpour of condolence messages poured in for the man who was a lot more than a boxing superstar. A philosopher, a poet, a political activist and a showman -- Ali, as Barack Obama says, was the greatest. Period.

In India -- like elsewhere -- Ali was trending across social media as thousands attached messages, quotes and videos to the hashtag #RIPAli. As social media stories often go, one Twitter user even emerged as an internet celebrity after her tweet referring to Ali went viral. “RIP Muhammad Ali. The greatest footballer of all time better than Maradona, Messi and Ronaldo,” Twitter user Anadita Patel tweeted.

The tweet went viral, with the reaction to it being picked up by the national press and making the girl famous overnight -- for all the wrong reasons. 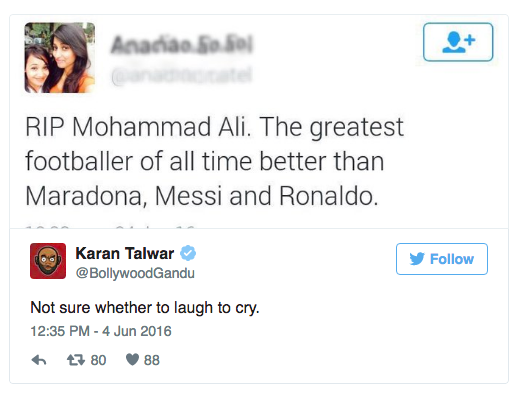 Perhaps more embarrassingly, Kerala Sports Minister and senior CPM leader E P Jayarajan offered tribute to boxing legend Muhammad Ali as “a great personality in the Kerala’s sports world”. According to the Indian Express, “Just now, I have heard the news that Muhammad Ali died in America. He was a great personality in Kerala’s sports world. Winning gold medals, he took the fame of Kerala to the world and to the skies. I am expressing Kerala’s grief in his death,” Jayarajan, who is also the state industries minister, said on live TV.

Blunders aside, Ali united the world for a few days as messages remembering him reiterated his position on religion, race, humanity and peace.

“Muhammad Ali was the Greatest. Period. If you just asked him, he’d tell you. He’d tell you he was the double greatest; that he’d ‘handcuffed lightning, thrown thunder into jail’. But what made the Champ the greatest – what truly separated him from everyone else – is that everyone else would tell you pretty much the same thing… “Like everyone else on the planet, Michelle and I mourn his passing. But we’re also grateful to God for how fortunate we are to have known him, if just for a while; for how fortunate we all are that the Greatest chose to grace our time,” US President Barack Obama said in a statement.

Republican Presidential candidate Donald Trump sparked a political backlash with his Muhammad Ali tribute. “Muhammad Ali is dead at 74! A truly great champion and a wonderful guy. He will be missed by all!” Trump tweeted.

Several social media users hit out at Trump, reminding the real estate Mogul of his anti-Muslim comments over the last few months. 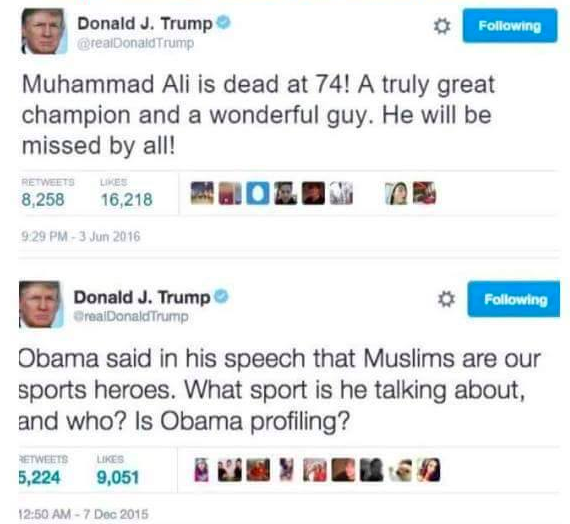 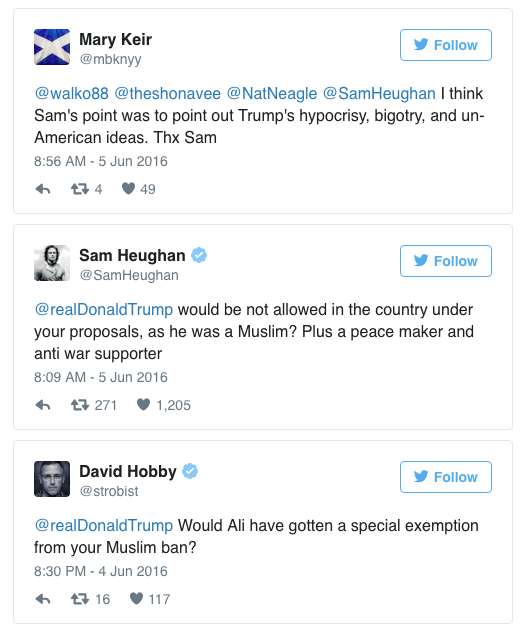 Controversy aside, the outpour of support for Ali is testament to the fact that the values and principles that he stood for -- equality, coexistence, compassion, peace, perseverance -- still have a place in the world.

This weekend, we all rose on Muhammad Ali’s shoulders. The British prime minister, David Cameron, wrote on Twitter: “Muhammad Ali was not just a champion in the ring – he was a champion of civil rights, and a role model for so many people.”

Brazilian soccer great Pelé said: “The sporting universe has just suffered a big loss. Muhammad Ali was my friend, my idol, my hero. We spent many moments together and always kept a good connection throughout the years. The sadness is overwhelming. I wish him peace with God. And I send love and strength to his family.”

“Muhammad Ali was a legend and a legend never dies. All that he did for the sport will never be forgotten. In fact his work even outside the ring has immortalised him. He did so much for so many,” said Indian boxer Vijender Singh.

“It’s a huge, huge loss for boxing. I personally feel a sense of loss because he had inspired me and so many others like me. He will always be remembered for being a powerful boxer and an equally powerful personality. It’s a very sad day for the sport,” said Mary Kom, a five-time world champion.

“It really saddens me that a huge legend is no more between us. But greats never die, they live on for all that they have done in their lifetime. He will always be alive in the hearts of people because he touched so many lives with all that he did. He may not be there in person anymore but his spirit will live on because every time someone would say boxing, the first name to come to mind would be Ali,” said Shiva Thapa -- the only Indian boxer to have qualified for the Rio Olympics thus far.

“My hero since childhood. I always had a wish to meet you some day but now it will never happen. RIP “The Greatest”,” said Sachin Tendulkar.

“Sportsperson chase excellence with ambition. We look up to a few who tell us keep going. One such name is #MuhammadAli …Float like a butterfly sting like a bee would never be the same. R.I.P. The great #MuhammadAli,” tweeted chess whiz Viswanathan Anand.

The front page of several leading newspapers and magazines featured Ali over the weekend. 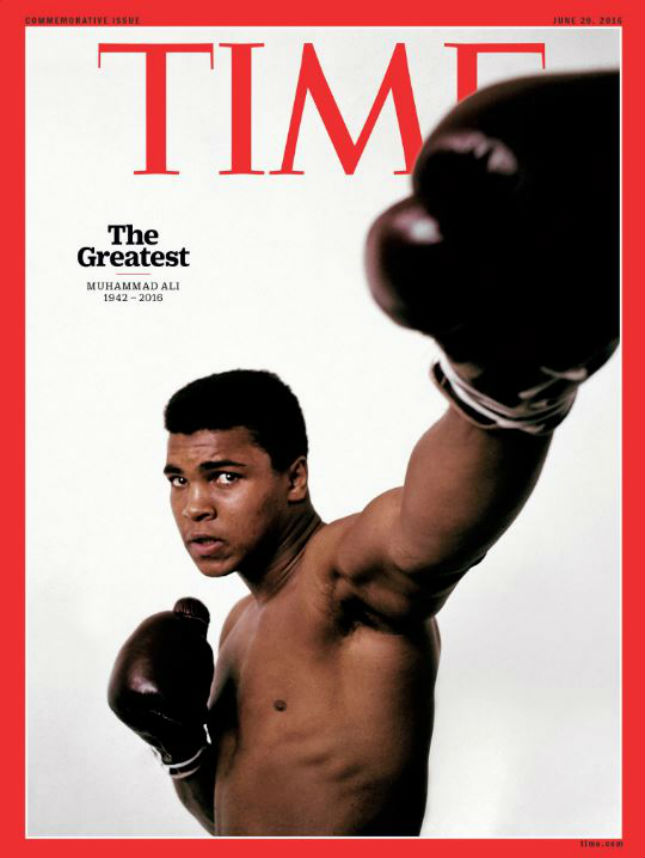 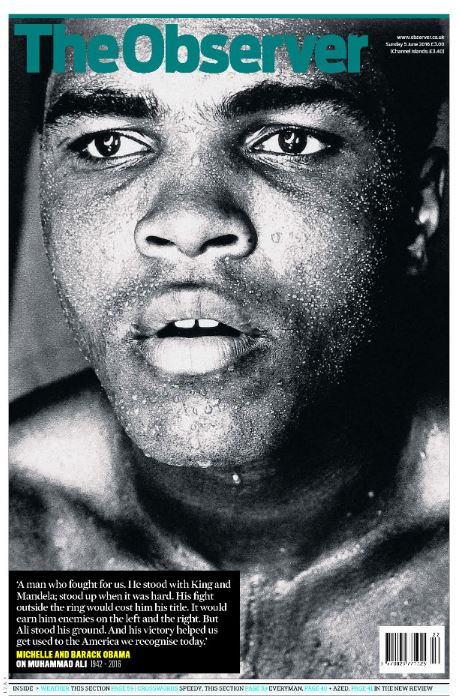 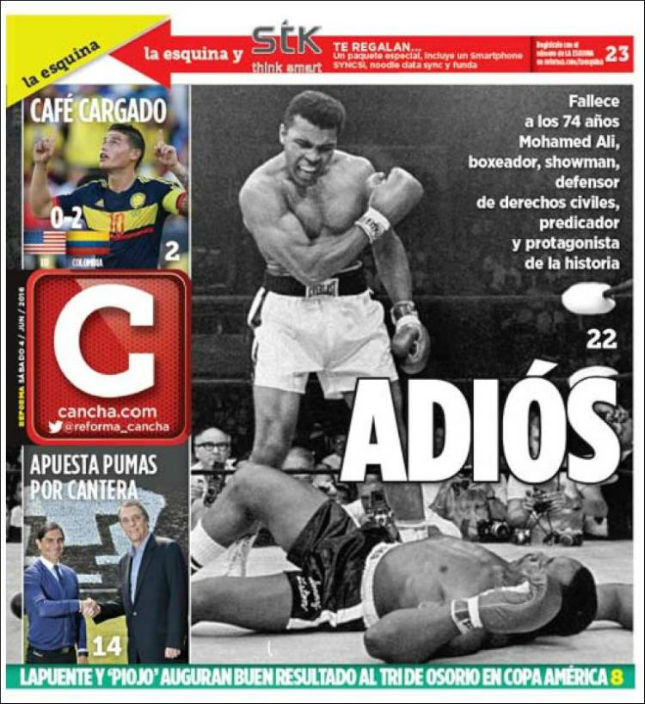 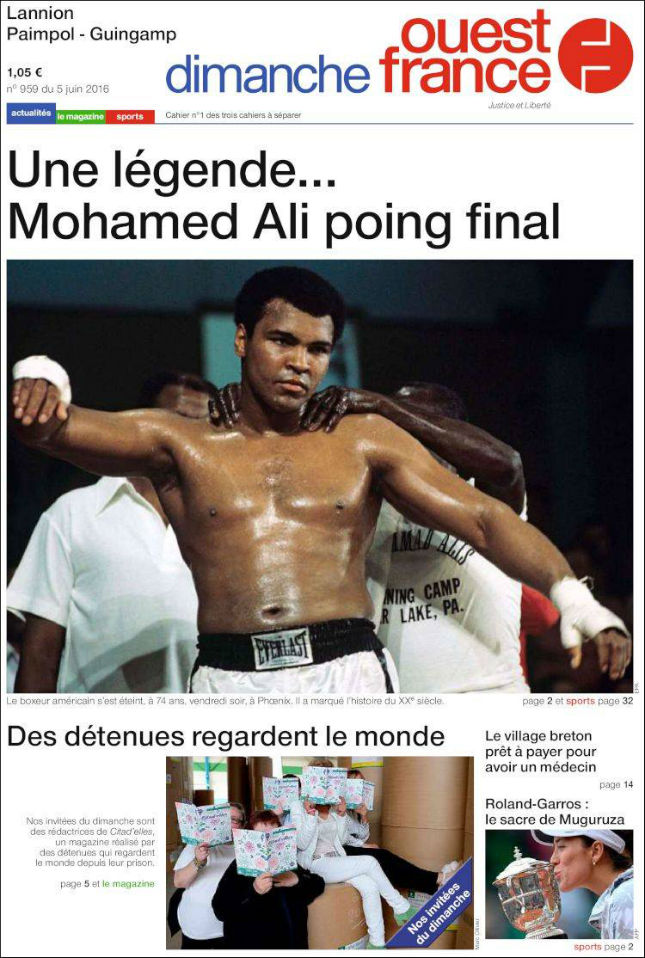 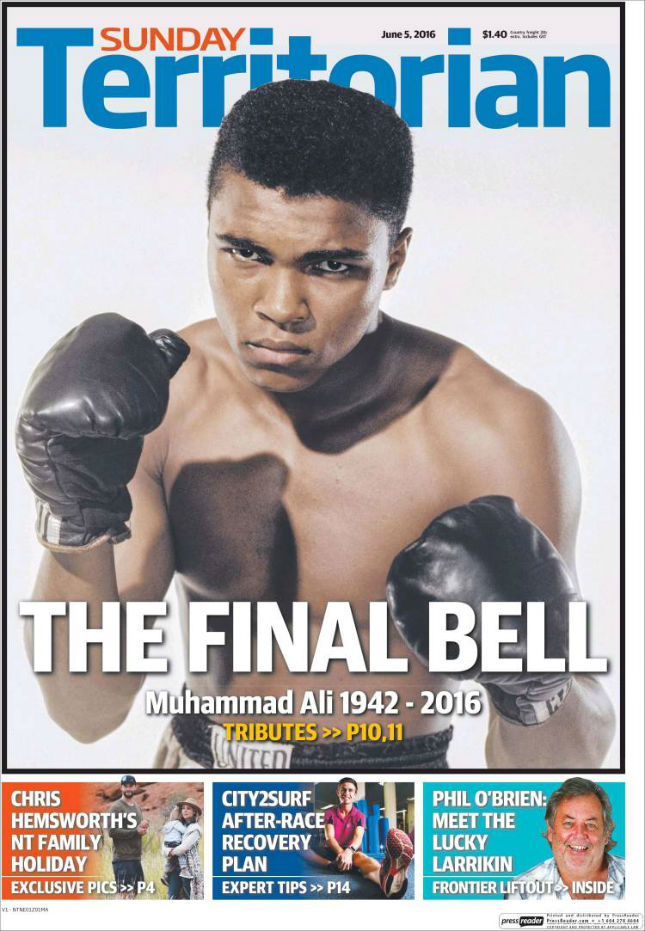