Did India's Environment Ministry Just Plagiarize A US Document?

NEW DELHI: India doesn’t have the best environmental track record -- be it deforestation, coal mining, pollution, loss of wildlife, displacement of peoples, the list goes on. But sample this: The only minister in the Modi sarkar to be elevated to the status of cabinet minister at the recently concluded cabinet reshuffle is former environment minister Prakash Javadekar.

As HT points out: Javadekar obliged Modi and party president Amit Shah with almost 100% project approval -- a record no previous environment minister can match. His ministry did not spare even finest tiger reserves such as Pench in Maharashtra and allowed infrastructure projects in and around protected areas. It was not a difficult task for him as his ministry changed rules more than 50 times in two years, diluting green regulations and packing project evaluating bodies with people from within the government rather than having independent voices.

Here’s something else that the environmental ministry did that raises cause for concern. In May, the ministry published a new Environmental Supplement Plan.

As a story in The Washington Post notes: The relatively obscure document has massive implications for India's ability to live up to its potential to create cautious, innovative and sustainable environmental policy.

Activists and lawyers reading through the plan immediately saw something that they believed was seriously wrong. The new plan indicated that companies that violated India's regulations on environmental clearances would simply be fined and then allowed to continue whatever they were doing, instead of being charged with a criminal offense, as they had been before.

This may sounds bad but it’s more or less the same system in place in the US. And as an investigation by The Indian Express points out -- it is clear that the United States' Supplemental Environments Project Policy is where India got the idea.

The highlighted portions in the published document below are copied WORD FOR WORD from the US document. 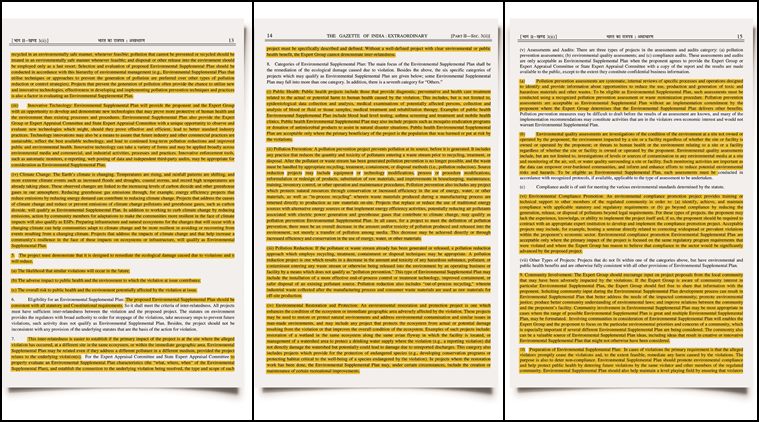 As the Indian Express notes: More than three quarters of the Environment Ministry’s Environment Supplement Plan (ESP) — around 2,900 words of the 3,850-word draft — is a direct lift from the Supplemental Environmental Projects Policy (SEP) document adopted by the United States in March 2015.

All of the above makes for a worrying picture. Add to that India’s massive scaling up of coal mining, more lenient regulations on environmental clearances, displacement of people (the list goes on) and we have several huge environmental disasters in the making. To add to the mess, the ministry isn’t even publishing original work, but plagiarizing!

And the man behind it all just got promoted to cabinet rank. I repeat, the only minister to have seen an elevation.