Over 200 Animals Including 27 Rhinos Dead In Kaziranga, But These Rescue Stories Will Make Your Day

NEW DELHI: The worst floods in over a decade in Assam have claimed over 34 lives and displaced over 11 lakh people, with rescue and rehabilitation efforts underway. At the time of writing, Kaziranga National Park is trending on Twitter, as reports emerge that almost the entire park is inundated. Over 200 animals including 27 rhinos have been killed in the deluge, with the numbers likely to rise.

Heartbreaking images of animals struggling to make it to higher lands have gripped social media. The annual flooding in the national park is actually essential to restoring its vast greenland ecosystem, but heavier than usual rainfall this year has led to an environmental crisis.


Amidst all the destruction, stories of human bravery, cooperation and compassion are coming to the fore. Most impressive of these are the ones involving the villagers in and around the national park -- who themselves have lost belongings and loved ones in the floods, but are still coming together day after day to rescue stranded wildlife.

The Wildlife Trust of India has shared some of these rescue stories on their website. The WTI is working alongside the Assam Forest Department (AFD) and the International Fund for Animal Welfare (IFAW) in the national park. The three organisations together run the Centre for Wildlife Rehabilitation and Conservation (CWRC).

One such rescue involved a stranded male rhino calf. 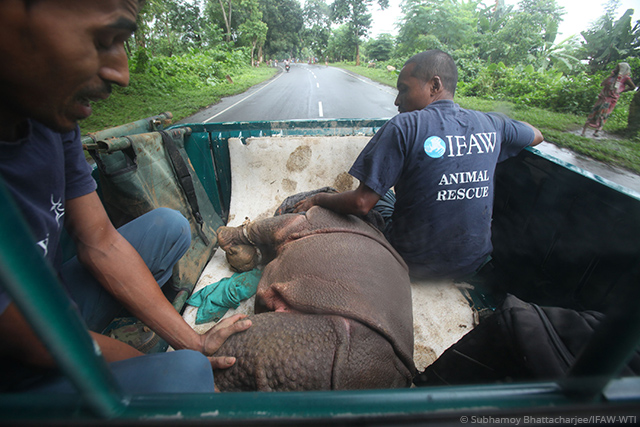 WTI notes, “The calf, which had been separated from its mother, was seen struggling to swim across an inundated paddy field opposite the Hathikuli Tea Garden under the Central Forest Range of Kaziranga National Park. It was rescued by forest guards and shifted by boat to the backyard of a house in a nearby upland area. Responding to an emergency call, an MVS team led by WTI Deputy Director Dr Rathin Barman and veterinarian Dr Samshul Ali reached the spot and transported the calf to CWRC for stabilisation and care.

“The calf is highly stressed. It has been separated from its mother and had to swim through flood waters”, said Dr Panjit Basumatary, the lead veterinarian at CWRC. “After two unsuccessful attempts it is now responding to oral rehydration and milk formula. We have placed it under 24-hour observation in the Large Animal Nursery.”

Located on the floodplains of the Brahmaputra River, Kaziranga National Park, one of India’s UNESCO world heritage sites, actually benefits from the annual monsoon floods, which serve to recharge its vast grassland ecosystem. However, the park is facing a major wildlife crisis this year as large portions of its area have been completely inundated in what are being described as the worst floods in a decade.” 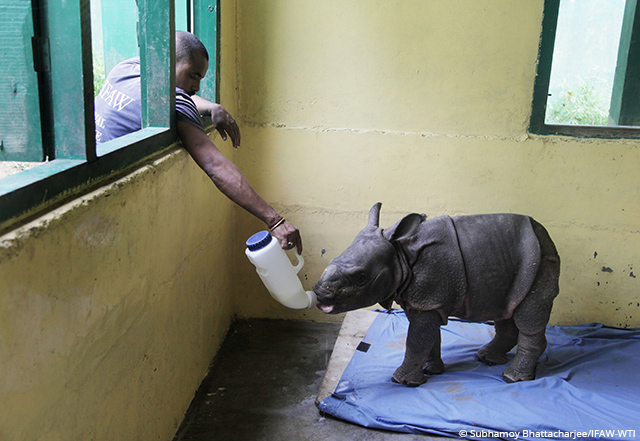 Following this update on the rescue of a three-month-old male rhino calf on July 26, a yearling female rhino was rescued the same day by locals in the Sildubi area of Kaziranga’s Bagori Forest Range, and brought to CWRC by an Mobile Veterinary Service team with the assistance of frontline forest staff.

The next day, four rhino calves were successfully rescued from the floods and admitted to CWRC for further care. These included two female calves found in separate rescue incidents, again in the upland areas of Sildubi in the Bagori Range. Another female rhino calf, nearly six months old, was rescued by a joint WTI-JTEF-IFAW MVS team led by veterinarian Dr Daoharu Baro from National Highway 37 late in the evening. “We were monitoring the animal since early morning when it reached near the highway. There was no scope to rescue it, however, due to the high water level. Finally, in the evening, we were able to give it the space it needed to come out to a safer place near the highway”, Dr Baro said. Crowd management was a major challenge on NH37 during the rescue and the DFO of Kaziranga had to step in to personally lead the operation, with the support of Assam Police, CRPF and VDP personnel. 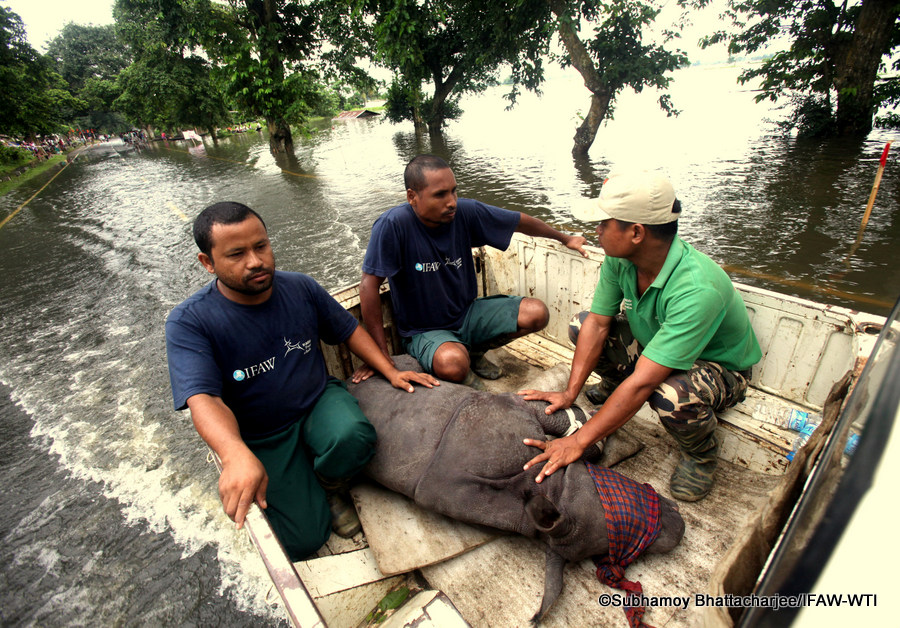 The most dramatic rescue of the day took place in the afternoon at Diphalu Pathar Dergayan Gaon, a flood-affected village. Earlier that morning a villager had spotted a male rhino calf, approximately six months old, trying desperately to find higher ground in the flood waters. He informed Pramod Gogoi, Chief General Secretary of the Kaziranga Natural Environment Education & Cultural Association (KNEECA) and other villagers, and together they chalked out a plan to save the rhino. “All households here have their own boats since the area is flood prone”, Mr Gogoi said. “We somehow managed to drag the calf and tie it to a tree in front of a house. It only had a small space to stand but it was safe from the flood waters for the time being. We also informed the Kaziranga DFO’s office and through them, the CWRC rescue team.”

An IFAW-WTI MVS team – veterinarian Dr Samshul Ali accompanied by animal keepers Lakhiram Das and Ramen Das – reached the spot having navigated through inundated villages on two country boats. The boats were lashed together and the calf placed on one, with people acting as a counterweight on the other boat. The journey back was precarious to say the least, but the animal was successfully transported through the flood waters back to the MVS vehicle. 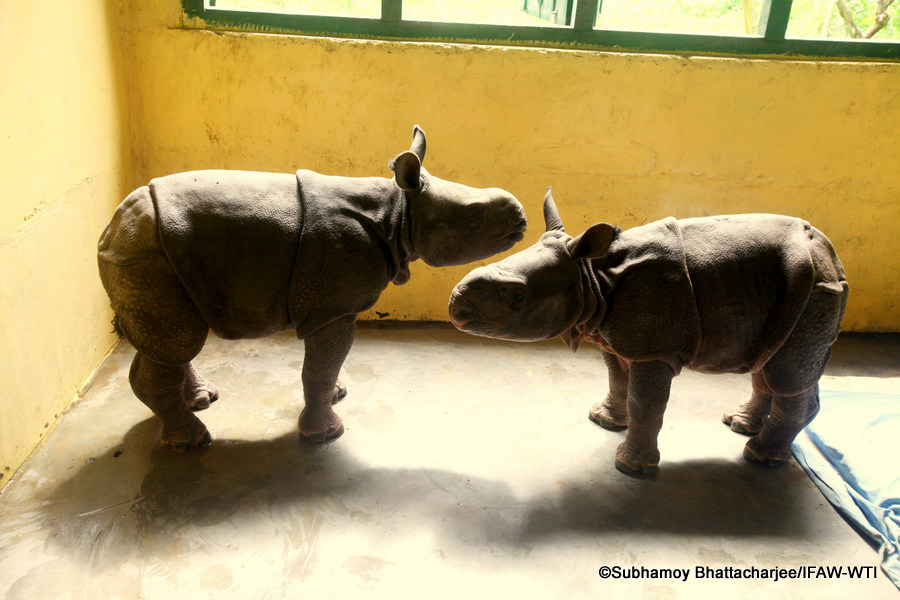 “This was a first-of-its-kind rhino calf rescue in the present flood phase”, said Dr Ali, who sustained a minor injury in the rescue operation. “We had to be very cautious with our handling of the animal, particularly during the boat journey.” The courage and empathy of the flood-affected villagers deserves special mention here. The entire village came together, setting aside their own predicament, to save a baby animal.

All rescued calves are being closely monitored at CWRC’s Large Animal Nursery. Understandably, they are highly stressed at present and have not been responding well to formula milk, which is unfamiliar to them. The veterinarians at CWRC have been providing the requisite medications however, and are hopeful that the animals will begin to feed as they become acclimated to their new surroundings.

The Wildlife Trust of India has issued an appeal for donations.

Donations can be made here.