NEW DELHI: Wrestler Sakshi Malik made all of India beam with pride when she won the bronze medal in the 58kg category at this Rio Olympics this week.

A tweet from Pakistani journalist Omar Quraishi, however, dampened the mood to some extent as it elicited responses not just from the wider public, but also Bollywood superstar Amitabh Bachchan.

“Finally one of the 119 competitors that India sent to Rio has won a medal - a bronze - now see how they portray it as if they won 20 golds,” Quraishi tweeted. 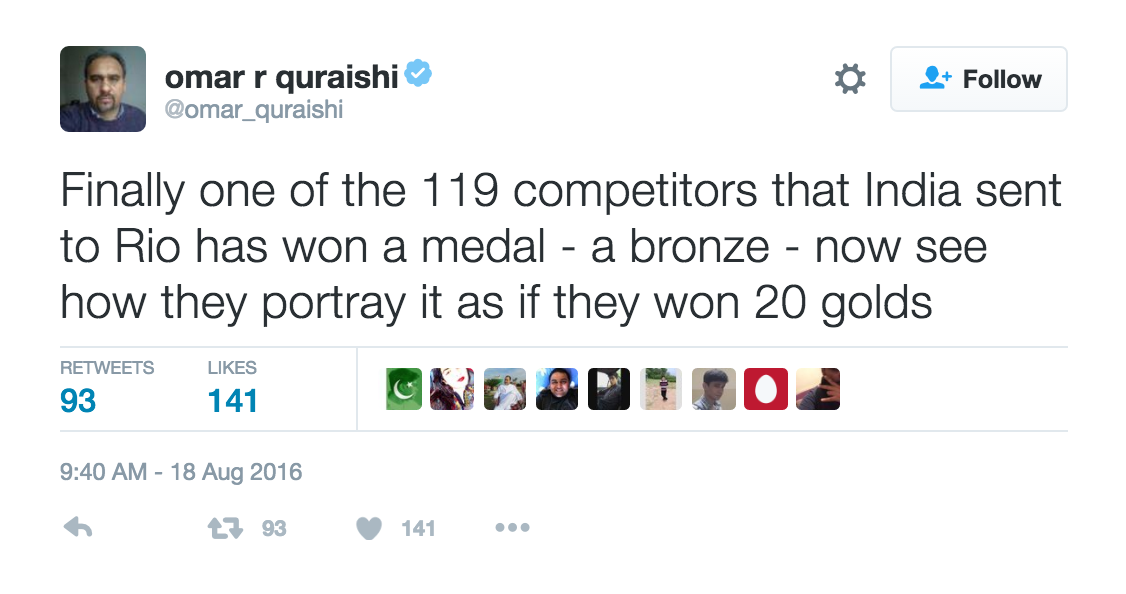 He followed up the tweet with “For a population of over 1.25 billion India managed just one bronze medal - Norway with 5 million managed 2 -- tch tch tch.” 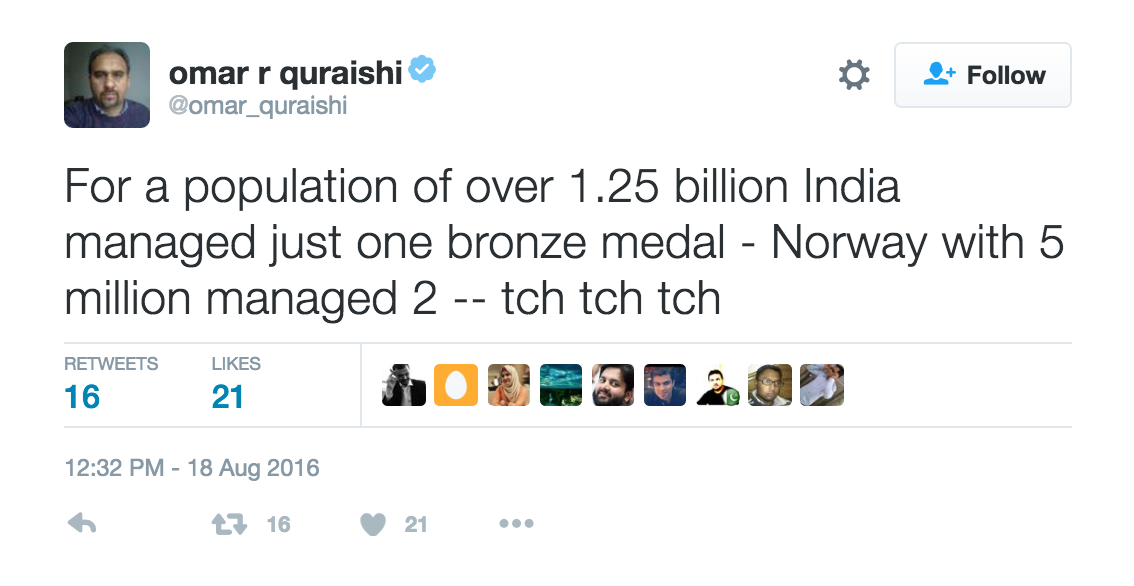 As the retorts started pouring in, Quraishi tweeted, “My TL would suggest that may Indians on Twitter are quite intolerant of criticism - one bronze for 1.25 billion people is valid criticism,” and followed it up with, “JUST IN: The Indian Army wins Gold at the Rio Olympics in the newly-introduced sport 'Shooting Unarmed Civilians in the Eye'.” 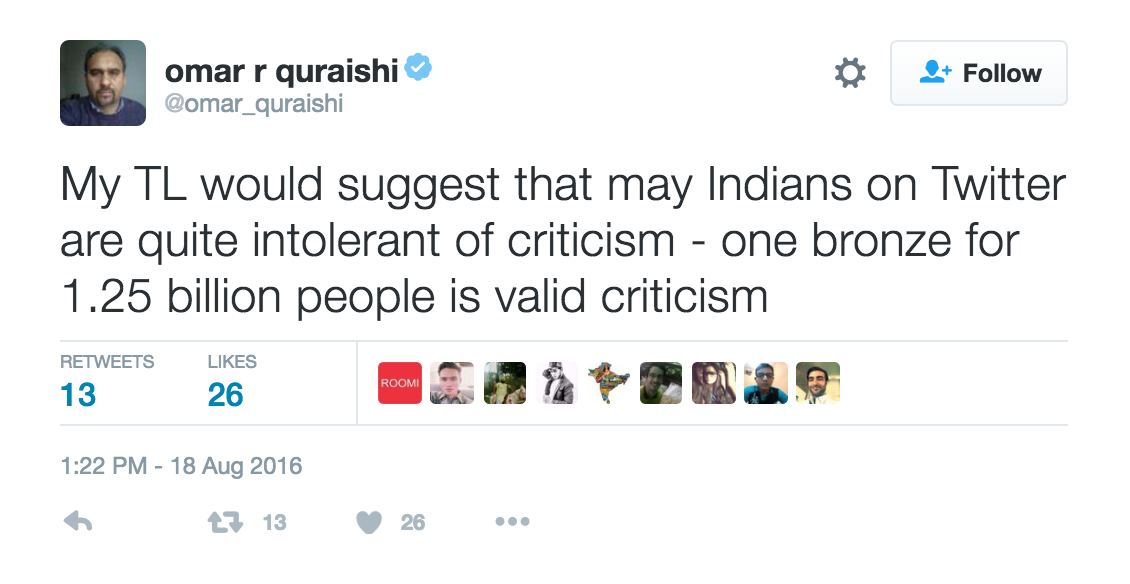 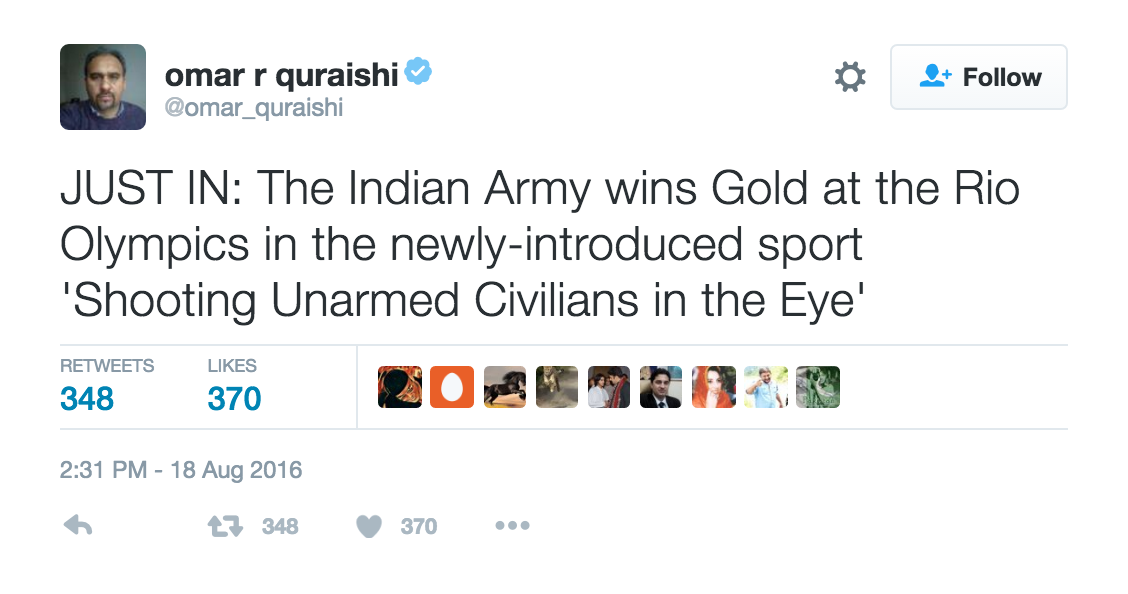 As the tweets and retweets that followed took on the biases of an India-Pakistan tit for tat, Bollywood superstar Amitabh Bachchan also stepped in. “For me it is worth a 1000 golds and even that is not enough. Pride for Sakshi, proud that she is Indian and a woman,” he tweeted. 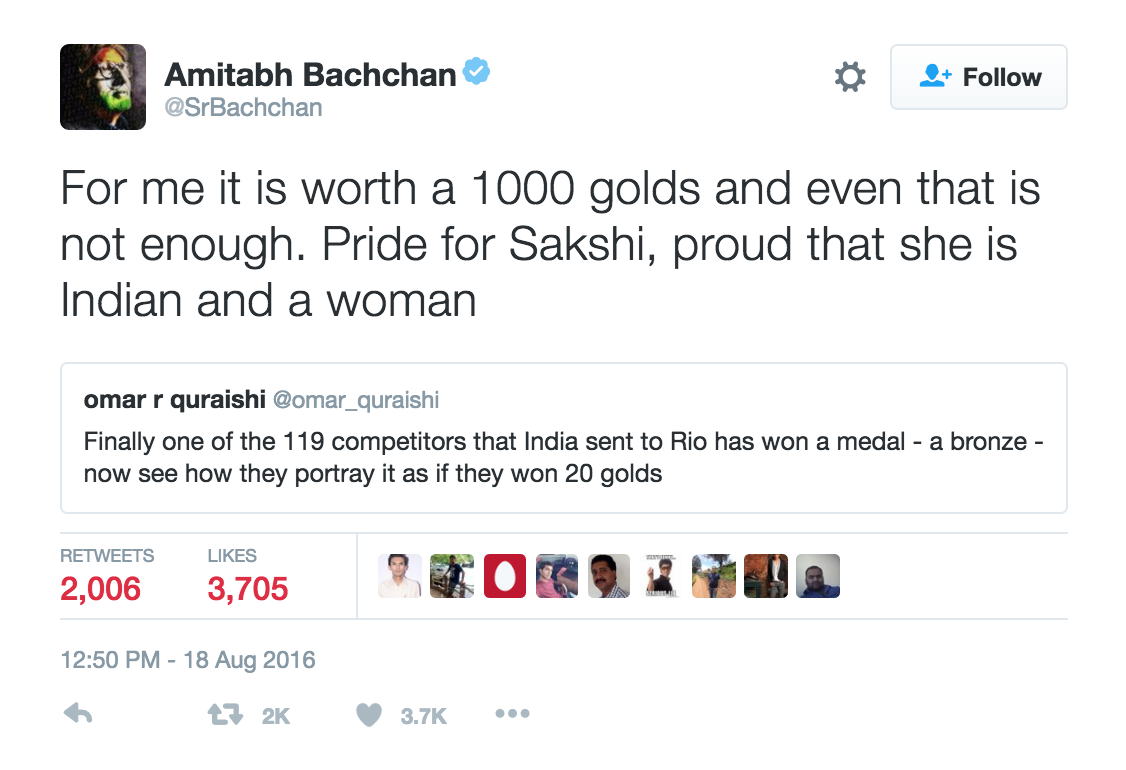 Journalist Shekhar Gupta too joined the fray, saying, “You deserve a red card. No proportionate quota in Olympics. #GB has more medals than 25 times bigger China,” and adding, “Agree. Our athletes win not due to govt policies but in spite of them. That's why we mustn't mock their achievement.” 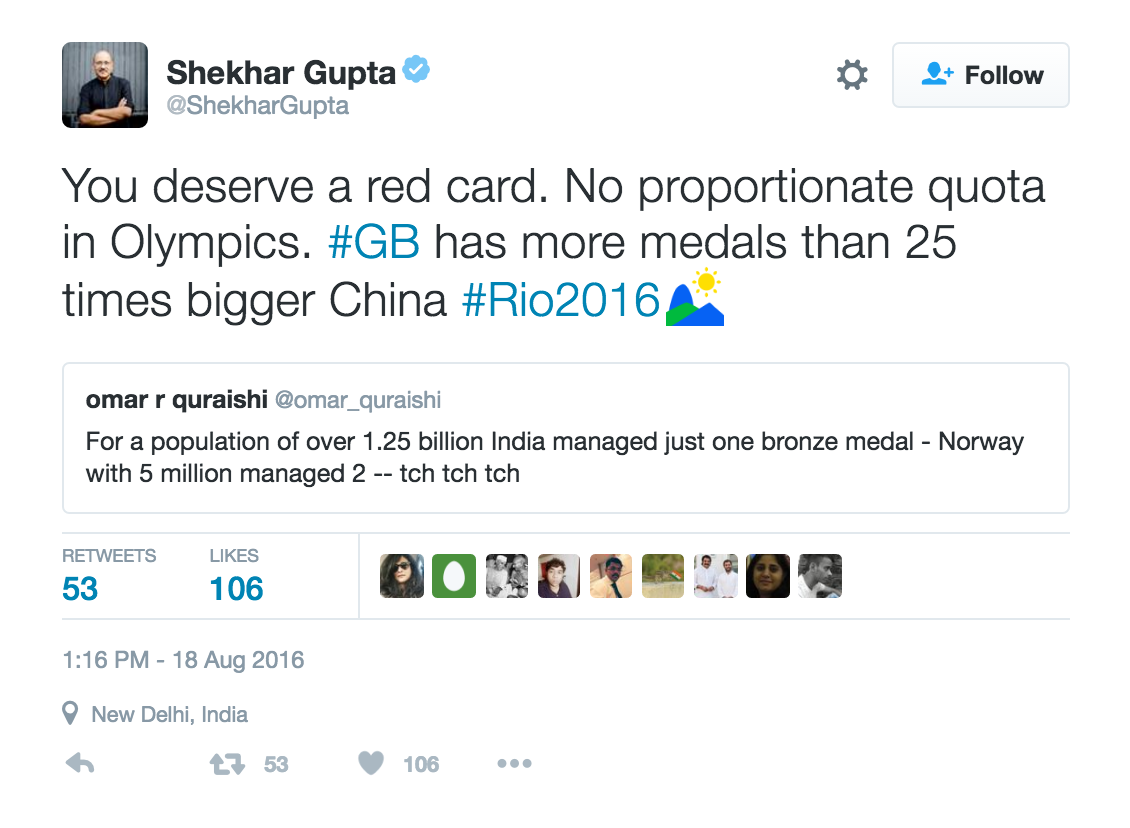 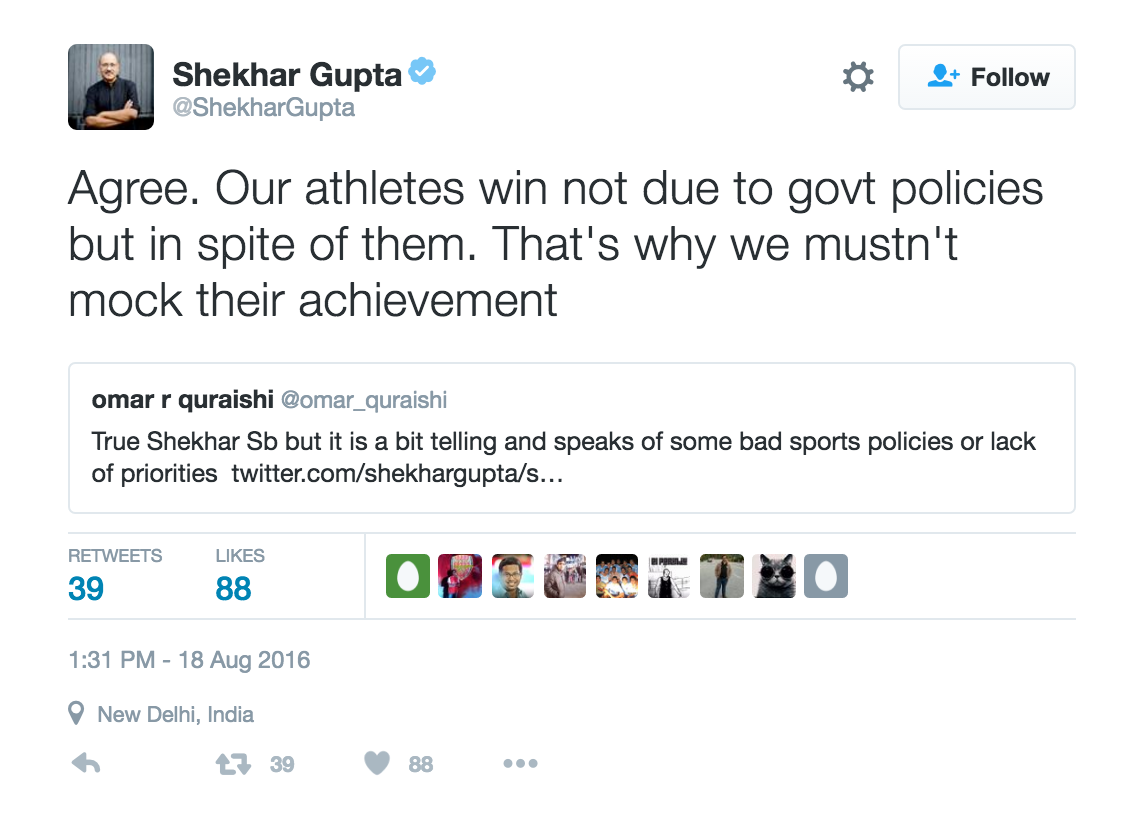 The wider public also responded, with several tweets critiquing the comparison and others still highlighting that Pakistan too has its own faulty track record when it comes to violence and human rights.

User @harishbpuri said in response, “Says the country which sent 7 athletes and 17 officials!!” 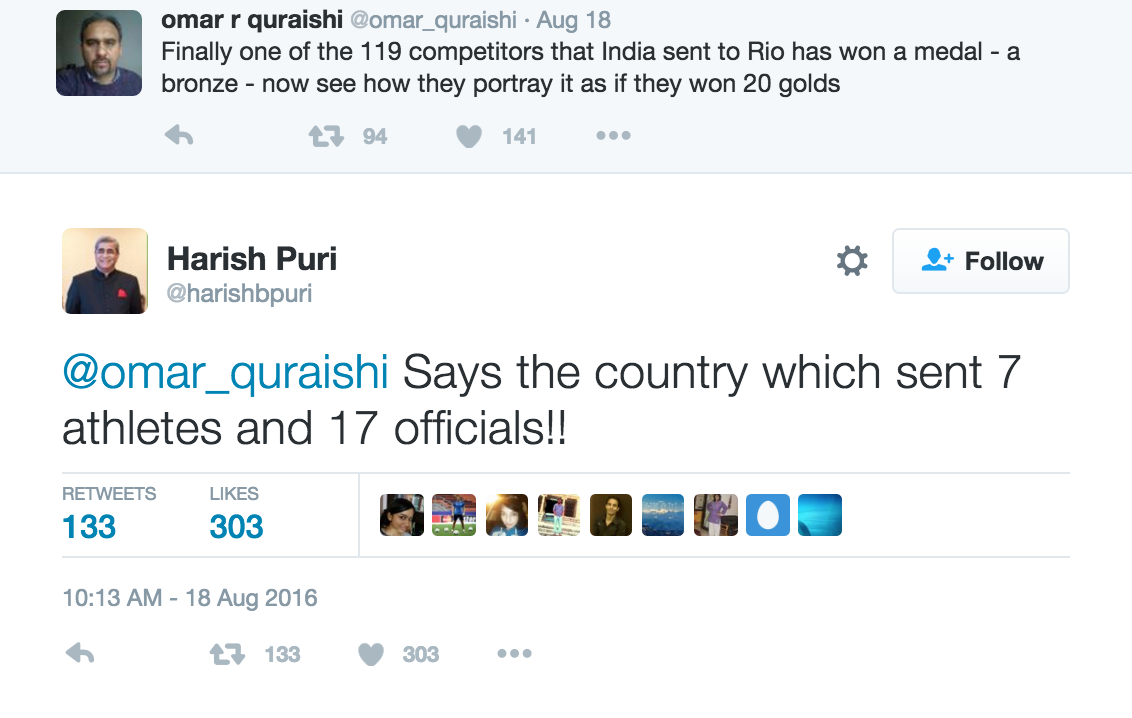 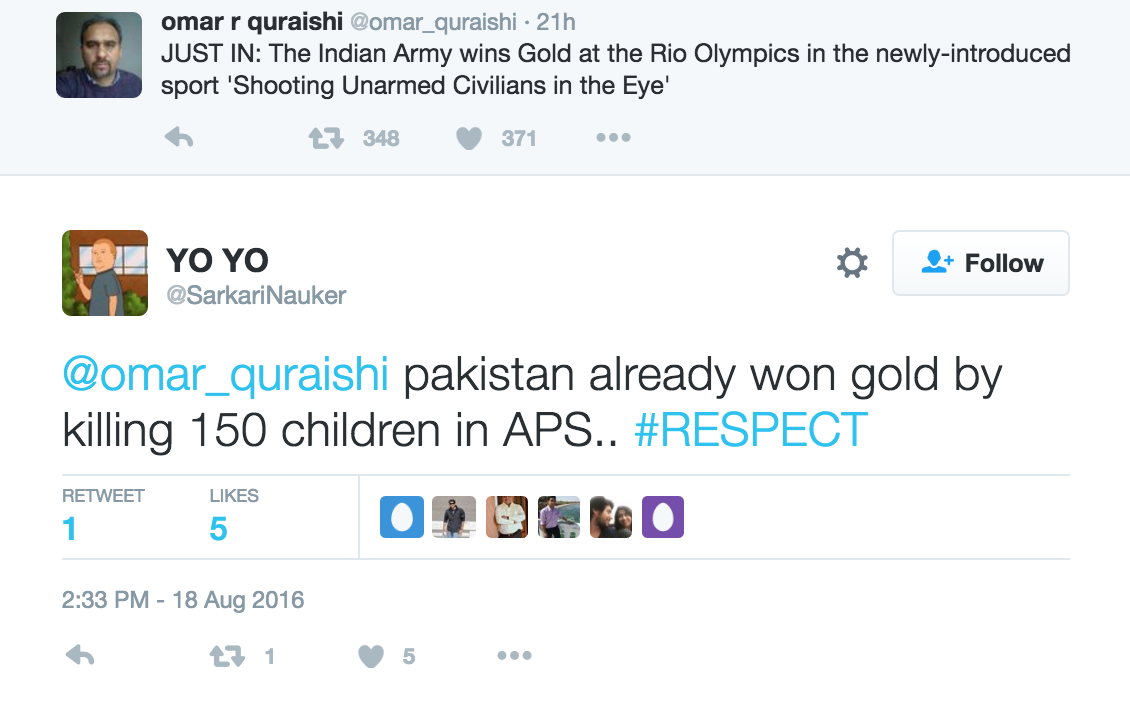 @Sidaster tweeted, “And Pakistan wins all 3 medals in the 'using women and children as shields while perpetrating terrorism' event again.” 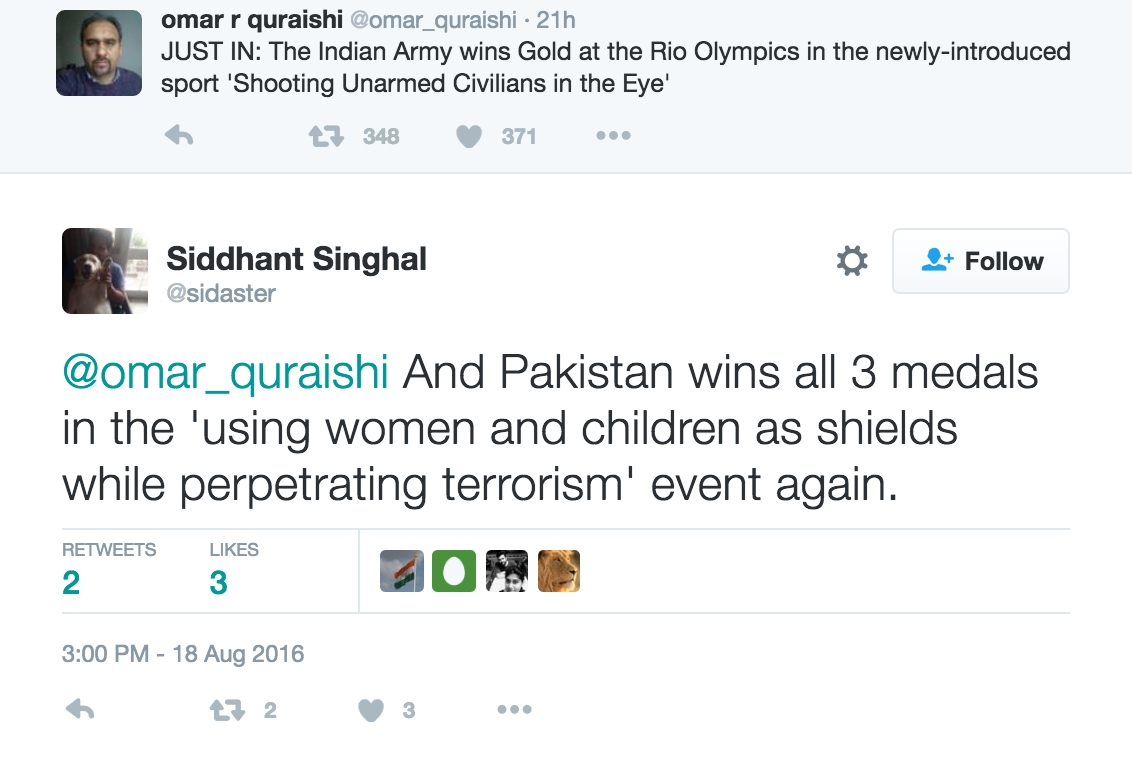