Trump In the Nude: Mysterious Statues Take US Netizens By Storm

NEW DELHI: Lately, United States Republican presidential candidate Donald Trump has been a hit with the crowds, albeit for reasons the real estate mogul would not approve of.

Life size statues of Trump have sprung up mysteriously across five cities in the United States. The statues depict Trump in the nude, and are thus, far from being a tribute to the outspoken presidential candidate.

The statues created quite a stir on social media, as photos of passer-bys posing with the candidate's effigy went viral. “A nude statue of Donald Trump appeared in Union Square today. I’m not attaching a photo out of courtesy to everyone,” tweeted Anica Padilla. “Judging by hands he put it there. Judging by ***** maybe not,” added user @th3j35t3r. 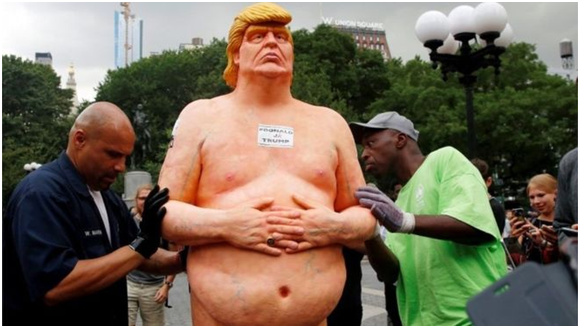 In addition to New York’s Union Square, another statue was placed on the corner of Hollywood Boulevard in Los Angeles, California. Three more statues were put up in San Francisco, Seattle, and Cleveland, where the Republicans held their convention in July where they had officially announced Trump as the Republican nominee.

The full frontal statues carry a small engraved plate at their base with the title “The Emperor Has No B***s” and are signed "Ginger." Ginger is the official name of a Las Vegas-based artist with an expertise in creating monsters for haunted houses and horror movies.

The statues, officially, are the work of the INDECLINE activist collective, and were created by an artist -- Ginger -- from Cleveland. "It is through these sculptures that we leave behind the physical and metaphorical embodiment of the ghastly soul of one of America's most infamous and reviled politicians," INDECLINE said in a statement 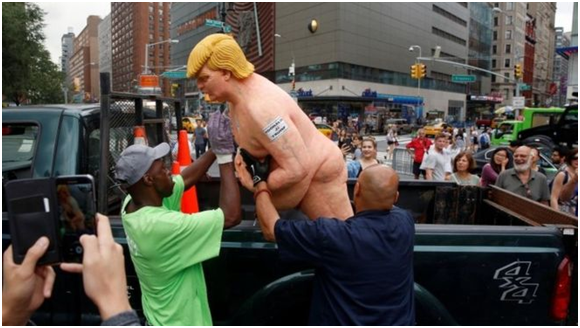 “When the guys approached me, it was all because of my monster-making abilities,” Ginger told The Washington Post. “Trump is just yet another monster, so it was absolutely in my wheelhouse to be able to create these monstrosities.”

The artist said that he spent up to 25 hours a week working on each of the statues after being commissioned by INDECLINE in April.

Authorities, however, are not amused, as the statues were quickly removed from most spots. As New York City Parks removed the unauthorised installations from Union Square, spokesperson Sam Biederman said, "NYC Parks stands firmly against any unpermitted erection in city parks, no matter how small.”

Donald Trump’s campaign has thus far made no official comment on the statues.