In Kashyap’s own words:

“It was really scary.

Today morning like everyday, I started off from my home to work in an auto. I must say the autowala was quited curious and intrigued by my long hair and nose piercing right from the beginning. He asked me in english where do I hail from. It took him a moment to locate assam in his mind map, later confirmed it as the state near Bangladesh. At a traffic signal, when all vehicles stopped. He turned around again and saw my leather bag. Then he leaned to touch my bag and concluded its made of cow leather which I refuted and said its made of camel leather which I got from Pushkar.

The answer didn't satisfy him. As the traffic light turned green, the auto moved forward and so did his remarks on how because of people like me cow slaughter is encouraged. I asked him to mind his own business and drive me to the destination.

To my horror he stopped the auto near a small temple on the way to my office. Before I could say anything, I see the autowala signalling at three men sitting in front of the temple smoking. Three men with red Tilak mark worn on the forehead approach the auto and start conversing in marathi which I could not decipher.

When I protested, the three men asked me to step out of the auto which I refused. When I was busy protesting, one of the guys came to the other side of auto and started checking my bag.

One of the guys then asked me my name...''Barun'' I replied. What's your full name was the next question... ''Barun Kashyap Bhuyan''.

The guy looked at the other two and said something in marathi out of which I could only understand the word '' Brahmin''. Maybe hearing Kashyap, they thought I am a Brahmin.

They left the site after bidding farewell to the autowala, the fellow cow protector.

At the next signal I got off from the auto, noted the auto number and asked for his phone number which he proudly gave to me saying '' aaj toh bach gaye''

Planning to go to the police station once done with work. 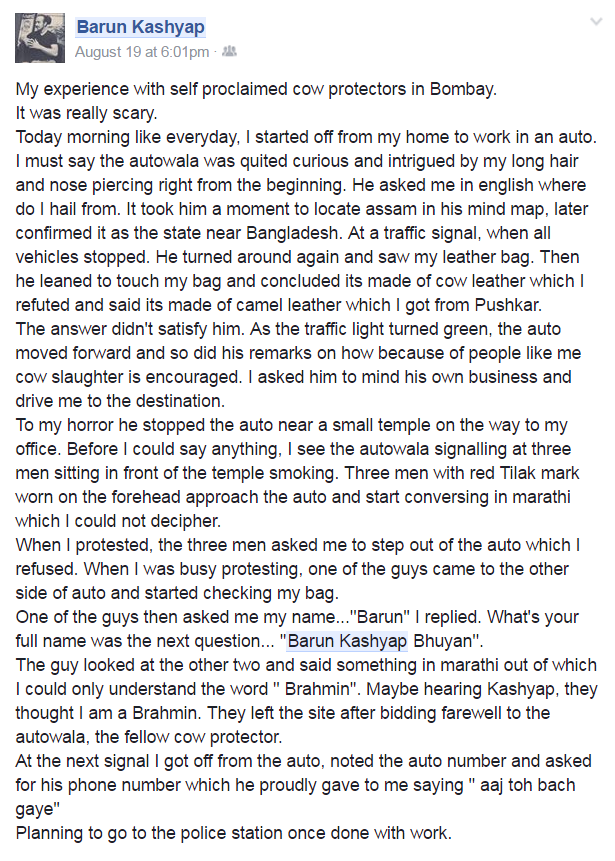 Harassment and attacks by self proclaimed gau rakshak or cow vigilante groups have seen an increase in recent months, with one more person being killed last week and his friend grievously injured in an attack in Karnataka for transporting cows.

The victim, Prashant Poojary was killed. His friend Akshay Devadiga is in hospital. The Karnataka government claims to have arrested 18 persons.

This comes after Prime Minister Narendra Modi broke his silence on the issue and spoke of 70-80% of gau rakshaks being anti social persons, who were cow protectors in the day and goons at night. This statement got the PM flak, the first visible offensive after over two years since he came to power. The Vishwa Hindu Parishad was openly critical of the claim and the RSS intervened to say that the percentage was exaggerated.

Gau Rakshaks have been operating in different parts of the country, resorting to hate violence in which the victims have been killed and/or seriously injured. The lynching of a man in Dadri by a mob of such vigilantes was a national shocker, with Mohammad Akhlaq being beaten to death for allegations spread over loud speakers from a temple that he and his family were eating beef. His son was also beaten and seriously injured at the time. Several months later after the incident took place late last year, a counter case has been filed by the vigilantes against the poor and traumatised family, on grounds that the meat found in their house was indeed beef. This comes after the first forensic report had made it clear that the meat was not cow beef.

In a spate of violence targeting Muslims two cattle traders were hung from a tree by alleged cow vigilantes in Jharkhands Latehar district in March this year. There have been several serious assaults on allegations and rumours with the attack on Dalits in Una becoming a game changer for the community. Seven persons of a Dalit family were attacked by these vigilantes in Gujarat for skinning a dead cow, four of them were stripped , tied to a car and brutally beaten. The major protest subsequently led PM Modi to make a statement differentiating between the genuine, and the anti-social cow protectors and went on in a subsequent speech at Hyderabad to say “attack me, shoot me, but not the Dalits”. The Una stir, however continued, and culminated just recently in a mammoth Mahasammelan on Independence Day in which thousands of Dalits in Gujarat took a pledge not to lift dead cows, or clean the sewers.