The Picture That Defines India At Rio2016: When Sakshi Met Sindhu

NEW DELHI: India produced two stars at the Olympics this year: wrestler Sakshi Malik who took Bronze in the 58 kg category and Badminton player PV Sindhu who became the first Indian woman to win a silver as she reached the Badminton finals.

A tweet posted by Malik has quickly become the definitive moment of Rio2016 for the Indian contingent, as it captures a smiling Malik, Sindhu and coach Pullela Gopichand. In a hugely complimentary tweet, Malik captioned the photo: “Ran into the super awesome @Pvsindhu1 and the Legend P Gopichand! True Champions!” 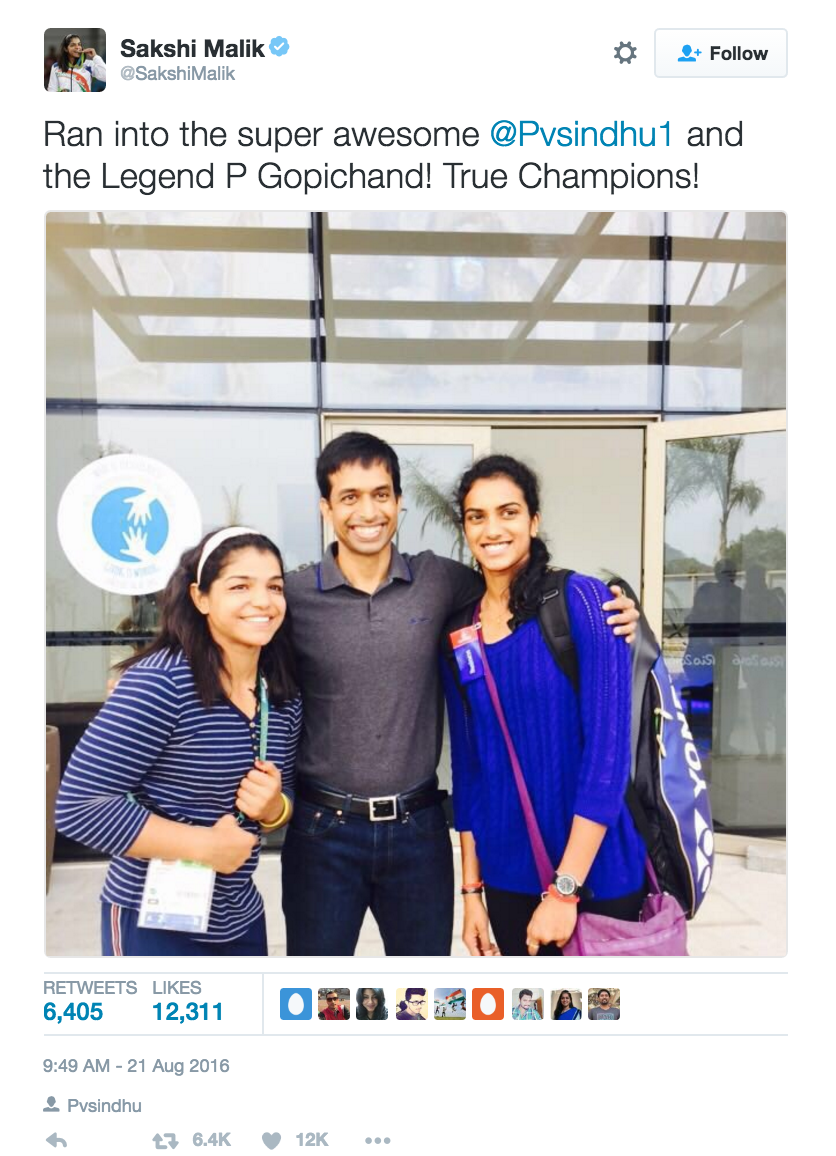 Malik -- the first Indian woman wrestler to win an Olympic medal -- led the Indian contingent at the closing ceremony at Rio. The Olympics were officially declared closed with a huge ceremony and Macarena carnival, ending with an official handover to 2020 hosts Tokyo. "These were a marvellous Olympics, in a marvellous city," said International Olympic Committee chief Thomas Bach. "I declare Games of 2016 closed," he added. "I call upon the youth of the world to assemble in Tokyo, Japan for the 32nd Olympiad -- bye, bye Rio!"

"I am the happiest man alive," Carlos Nuzman, president of the Rio 2016 organizing committee declared.

The Indian contingent was placed 67th having won two medals -- one silver and one bronze.

PV Sindhu was not part of the contingent at the closing ceremony as she left Rio on Saturday, arriving in Hyderabad on Monday to be greeted by a huge welcome ceremony. Greeting Sindhu were her parents - P.V. Ramana and P. Vijaya, Telangana Ministers Nayani Narasimha Reddy, Mahender Reddy and Srinivas Yadav and senior Congress leader V. Hanumantha Rao, and Andhra Pradesh Ministers Devineni Uma and Chinarajappa.

The Telangana government has announced a Rs. 5 crore cash reward for Sindhu, in addition to 1000 square yards of land near the Pullela Gopichand Badminton Academy in Gachibowli and a government job. Coach Gopichand has been awarded a cash prize of Rs. 1 crore.

Sakshi Malik, who is due to arrive back home soon, is being awarded Rs. 2.50 crore and a job by the Haryana government. The Delhi government is giving Malik an additional Rs 1 crore and has advanced the promotion of her father, Sukhbir Malik, who works as a bus conductor in Delhi Transport Corporation (DTC).

Meanwhile, Indian Prime Minister, Narendra Modi, on Monday congratulated the Indian contingent for giving their best at the Rio Olympics. "Want to specially wish the Indian contingent at #Rio2016. Every athlete gave his or her best," the PM tweeted. “Special gratitude to the host nation, Brazil for hosting people from across the world & organising a memorable #OlympicGames,” the PM added. “Spectacular #ClosingCeremony for #Rio2016. I congratulate all athletes who took part in the games. @Olympics,” he said. 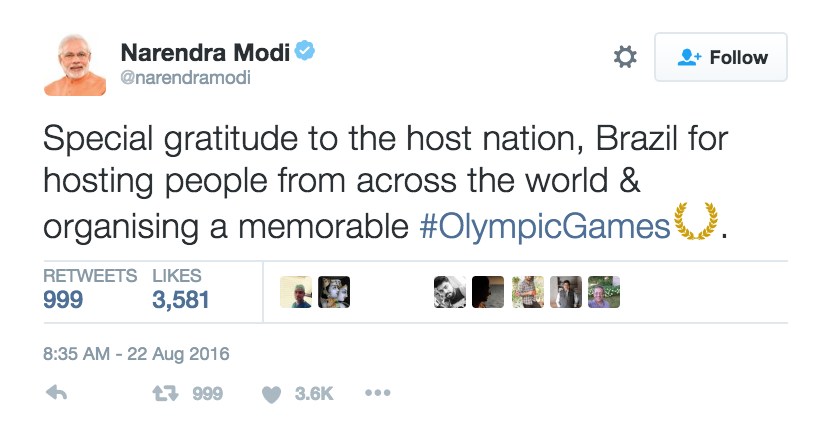 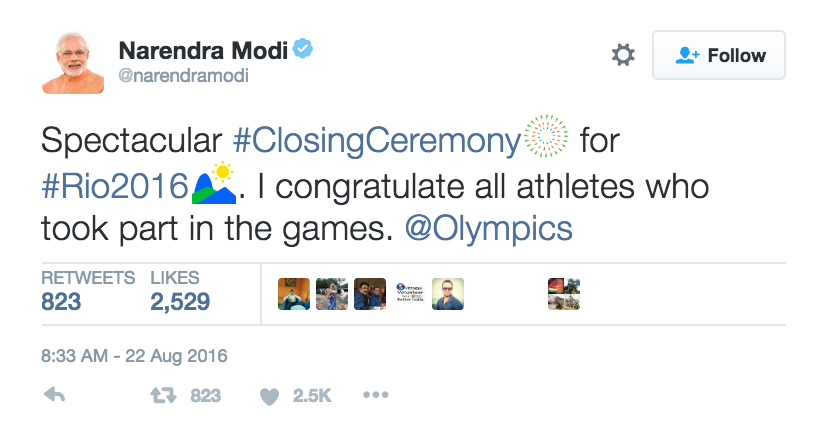