After Saif, Irfan Pathan Is Told: 'Do Not Name Your Son Dawood'

NEW DELHI: Cricketer Irfan Pathan and wife Safa Baig recently welcomed a baby boy into the world. The sportsman shared the good news on microblogging site Twitter. What should have followed were congratulatory messages, but in today’s India, that’s too much to ask of social media.

In what can only be described as normalising communal forms of thinking, a user attached an unnecessary piece of advice to the congratulatory message. After wishing the new dad, the user added the caveat “don’t name your son Dawood or Yakub” referring to Dawood Ibrahim and Yakub Memon. “Big Congrats @IrfanPathan On being blessed from a baby boy! But bhai uska nam #Daud ya phir #Yakub mt rkh dena! This world is Ridiculous” tweeted Divyanshu Raj.

Fortunately, Irfan Khan’s reply put the hostile comment in its place. “Irrespective of the name, my child will make the country proud just like his dad and uncle,” the cricketer said. 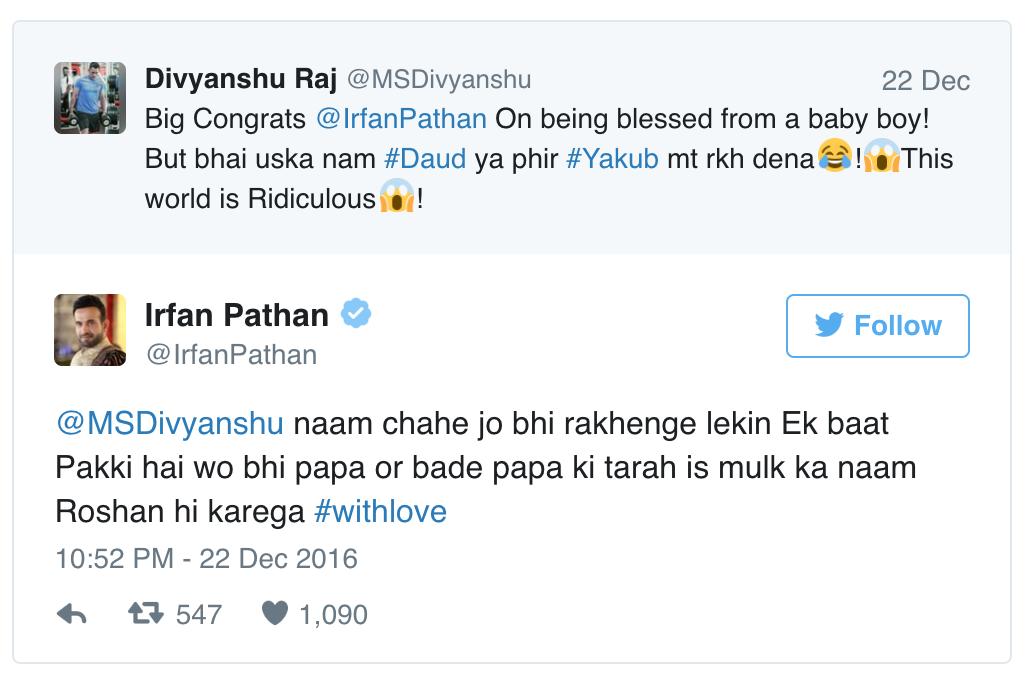 The child has been named Imran, and while that might shut the Twitterati up, the larger point deserves some attention. Being Muslim in India today, is automatically linked to being a terrorist or terrorist sympathiser, and Divyanshu Raj’s offensive tweet is indicative of this larger trend.

Just a few weeks ago, this trend was at the forefront of Twitter conversations, as Bollywood stars Saif Ali Khan and Kareena Kapoor announced that their baby boy will be named Taimur. The name was quickly linked to the likes of terrorists Osama Bin Laden and Hafiz Saeed, as if there was any link between the two.