A Death in the Ganj: Konkona Sen's Movie on The Politics of Exclusion

Urban and modern perceptions of “success” and “failure” are so twisted and warped and the lines between the two are so blurred that along the way, one does not quite know the difference. But the one who is considered a ‘failure’ by everyone including himself, bears the brunt of being a ‘failure’ in the common-sense understanding of the term. In her directorial debut, actor Konkona Sen Sharma picks up a story by her father Mukul Sharma that kept haunting her since she was a girl and makes A Death in the Ganj, fleshing it out to a full-length screenplay.

The director, in a nostalgic trip back to her childhood, revisits a small town called McCluskieganj where she would join her parents for brief holidays till they sold the house. The time-frame is seven days just before the New Year way back in 1979. The director structures the film with the framing device of two young men with 1979 haircuts and jackets discussing without emotion or rancour how to pack a dead body in the dickey of their old Ambassador. The camera’s perspective is from inside the dickey, as if the dead person is looking at them from below. The film closes with the two men inside the car driving away.

Whose dead body is it? Is it a man’s or a woman’s? Did the person die in an accident, was murdered? These questions keep haunting you just beneath the surface, like an undercurrent in this deceptively ‘family story’ of a young couple, Nandu (Gulshan Deviah) his wife Bonnie (Tilottama Shome), their little girl Taani and a cousin Shutu (Vikram Massey). They arrive in an old Ambassador at Nandu’s parents’ Anupama Bakshi (Tanuja) and O.P. Bakshi (Om Puri) home to celebrate New Year together. Old neighbours who are friends of Nandu, namely Brian (Jim Sarbh) and Vikram (Ranvir Shorey) drop in to say “Hello” while a ‘foreign’ girl Mimi (Kalki Koechlin), a friend of Bonnie’s and an ex of Vikram’s is a house-guest with the Bakshis.

A Death in the Ganj is a psychological thriller that involves ordinary people like us, soaked in and enjoying a Westernised way of life, where the women smoke and drink and dance away with their men; where the identity of the ‘victim’ if one can call the person that, is the pivot of suspense the story revolves around. The film rides on a strongly character-driven story with the script shifting from one character and his/her relationship to the next to zero in on a slightly diffident, eager-to-please Shutu, a young man who tags along with the family for a brief “holiday.” Konkona’s characterisation is so brilliant that no one is superficial and subordinate to anyone else, including the two family retinues who are local Santhalis. The psychological suspense is not allowed to get in the way of the narrative or the events as they unfold, layer by slow layer, enriched by the beautiful music on the soundtrack, slowly opening up to explore the interactions of the people within it. It is constructed backwards and not forwards because you return to the present from the past seven days to find out who the victim is/was. 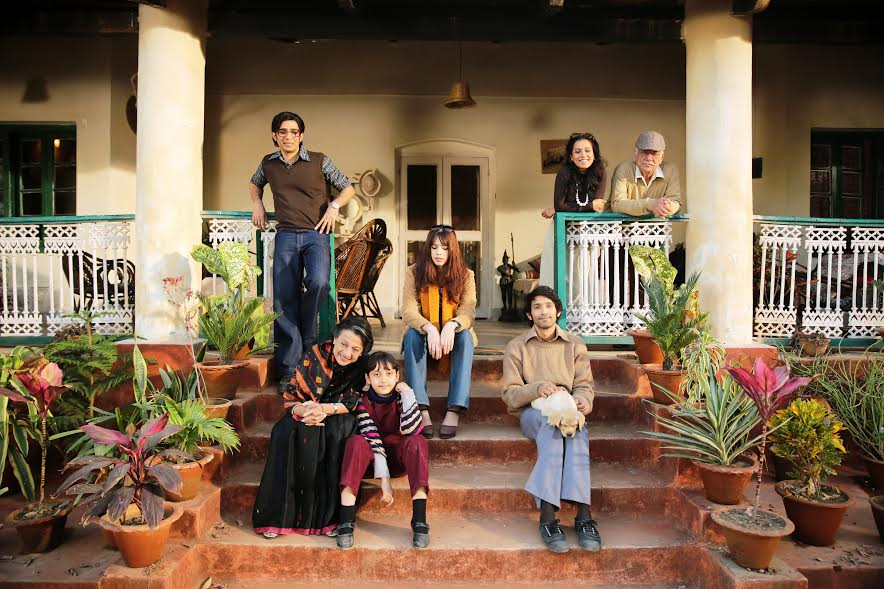 At the same time, it is also a situational film where the environment becomes an important character with its remoteness, its old-world charm, with the dried leaves crumbling under your feet as you walk across the dry lands, where Nandu and his friends carved their names on the trunk of a giant tree, where birdcalls dot the soundscape juxtaposed against the whirring of a speeding motorcycle and a forgotten old bathtub in the compound tries to establish both modernity and movement.

The recreation of the ‘period’ – 1979 – which falls somewhere between “history” and “period” is touched up beautifully with emotional resonances – handwritten letters posted in inland letters that have ceased to be; a sponge cake sold by a neighbouring lady at “nine rupees and four paisa”; the city-bred Bonnie terrified by a simple frog; one has to go the local post office to make a trunk call because the signals on landlines do not seem to work; nostalgia is held captive in Black-and-White photographs, framed and hung or kept on dresser tops. All this is brought to life by Shirsa Say’s brilliant cinematography that catches the mellowness of the old town way back in 1979 and brings across the spirit of the story. The editing is so seamless and fluid that you do not even notice it.

Historically, McCluskieganj was the brainchild of Ernest Timothy McCluskie who created this homeland of members of the Anglo-Indian community. Between the 1930s and ‘40s, scores of Anglo-Indians from all parts of the Indian sub-continent came as settlers to this remote location that was once called Lapra, in the erstwhile state of Bihar now in Jharkhand. It is an eight-hour drive from Kolkata and is now almost bereft of the original Anglo-Indian population since the younger generation has chosen to shift to fresher pastures. The geography of the setting dictates the language of the film – mainly English with a smattering of Bengali which is the mother tongue of the Bakshis and a bit of local Hindi.

Along a chain of fun-events organized by Nandu and his friends, we discover that Shutu is an ‘outsider’, the odd ball who is either made a scapegoat for a faked planchette game, or, badly hurt in a kabaddi game that ends in violence just when Shutu appears to be touching the winning line, or forced to join in a group dance even when he feels shy or is scared of being made fun of. Shutu is the odd-job boy who carries Mimi’s high-heeled shoes to her bedroom when she is drunk; wipes the oil off the floor when Mr. Bakshi has spilled some while cleaning his gun. It is taken for granted that Shutu will take care of the little puppy Taani took from Brian. Shutu is packed off to the local market to fetch mutton for an elaborate dinner. Mimi seduces him into sex and then is in a hurry to shake him off. Shutu is desperate to “belong”, to mix with the ‘mainstream.’ 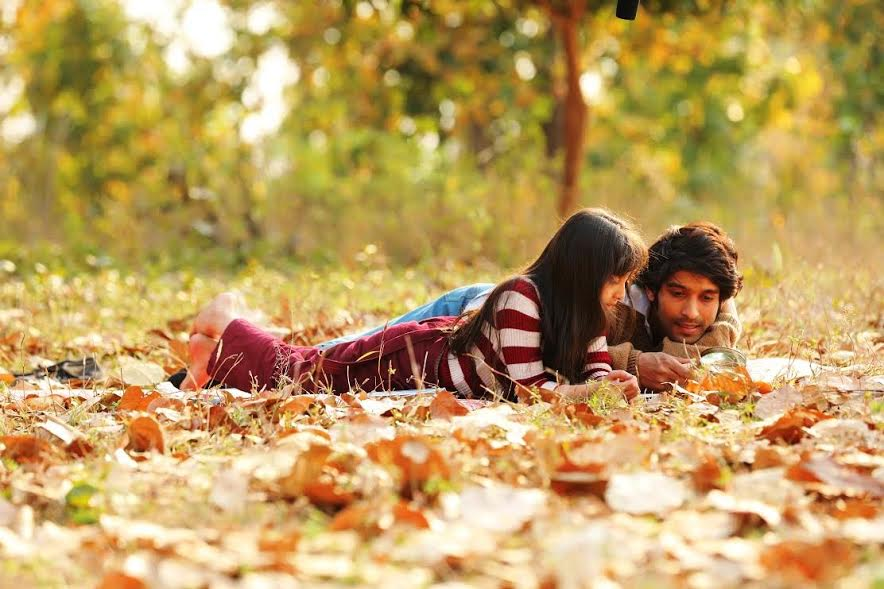 He lies through his teeth s to be one ‘among’ them. The only person who takes him seriously is the little Taani who revels at his sketches of the humble frog and is fascinated by the moth he takes out of his notebook and asks her to touch it. His aunt Anupama is slightly more concerned than the rest. Shutu is naïve and diffident and timid and his talent at chess is not taken to well by Nandu. Everyone calls him “Shutu” including Taani who should be calling him “uncle” but Shutu does not seem to mind. Or, does he? This forms the crux of the story and the mystery.

Most of us have a “Shutu” within the family; someone who is not remembered when everyone is savouring an elaborately laid out dinner, but is called each time some odd job must be done even when there are servants around. When Taani goes missing, tearful because Shutu has broken his promise to take her for a ride, Nandu takes Shutu along to search for her in the wilds and does not even bother to fetch him when Shutu’s voice cannot be heard as he has fallen into a ditch. The servant fetches him back at the insistence of Anupama but even she forgets to notice him when he is back. How can anyone allow himself to be walked over, trampled and treaded on and reduced to a joke like this?

Shutu comes back to find that no one has missed him and they are rejoicing over finding the lost Taani back. Even Taani turns away from Shutu and the simmering anger of being left behind, of not being missed, of his very existence being meaningless almost drives him to the edge. Edge of what, where, how and when? This is what Shutu is all about. We get to know his full name, “Shyamal Chatterjee” only from the press kit.

A Death in the Gunj is more about life than about death. It is more about the ‘gunj’ the name used for McCluskiegunj by visitors and locals. The brilliant performances by the ensemble cast that ranges from famous veterans to absolute newcomers are a treat to watch. Special commendation should go to Konkona Sen Sharma for having cast Vikram Massey in his first lead role as Shutu. He brings the character alive with his silences, his confusion over why they need him when something needs to be done but avoids him or makes fun of him at other times, with a twitch of his brow, his smouldering eyes, his pathetic weeping in the corner of his room, slipping under the quilt and pulling it over his head, trying to ‘feel’ his father by wearing his old sweater he fetches from the cupboard, his simmering anger that rises to the surface and he finds it difficult to restrain is an award-worthy performance.

The other actors, drawn and chosen very carefully by the director, have done equally well. It is a pleasant surprise to see Tanuja after a long, long time and she does full justice to Anupama Bakshi while no one needs to comment on Om Puri’s performance. Kalki’s catty comments and seductive ways are as convincing as is Bonnie’s derogatory attitude towards her “foreign” friend and also her arrogance and snobbery. One wonders why Tilottma Shome’s voice sounds as it Konkona has dubbed for her. And Ranvkr Shorey is a scream as Vikram, ready to jump into bed with Mimi though he is newly married and equally ready to physically attack Shutu is an innocent game of Kabaddi.

Most heroes are ‘successful’ or aiming to be ‘successful’ but Shutu is a failure. The script is silent about why a bright boy became a failure. But that is precisely the point. Why go looking for a ‘back story’ that does not exist? The film is like a labyrinth filled, metaphorically and symbolically with ‘blind spots’ and ‘hiding places.’ A Death in the Ganj is lyrical in its portrayal of a small town distanced from the madding crowds, yet it conveys a palpable sense of imminence. It involves a constant sense of motion – emotional, psychological and at times, even physical that follows the track towards the unavoidable tragedy in the end. Take a bow Konkona, you have given us a niche film targeted at a niche audience, true; but you have not tried to shy away from your refusal to compromise and making a film that is entirely “out of the box”.