A House of Many Faiths

A House of Many Faiths

In Cordoba, Spain, the Mezquita stands as a house of many faiths, a site of religious significance for Catholics and Muslims alike. The Mosque-Cathedral of Cordoba is one of the most exceptional monuments in the world, a testimony to the ancient alliance of art and faith.

It’s impossible to overemphasise the beauty of Cordoba’s great mosque, with its remarkably serene (despite tourist crowds) and spacious interior. One of the world's greatest works of Islamic architecture, the Mezquita hints, with all its lustrous decoration, at a refined age when Muslims, Jews and Christians lived side by side and enriched their city with a heady interaction of diverse, vibrant cultures. One has to breathe in the air of spirituality to best understand the magnificence of it all.

History has often seen empires collide and dissipate, even as other kingdoms rush in to rebuild on the settling debris of legacy already past. Some legacies persist, however, as tenacious reminders of the many histories they’ve seen over time. Cordoba, the Andalusian city in southern Spain, is one such place and the Mezquita-Catedral de Cordoba, is one such site.

We’ve had the fortune to see some incredible religious buildings over the last few years. Of those, it is Cordoba’s Mezquita that made the biggest impression on me. What makes the building so incredible is the mix of styles. The Mezquita is considered one of the two best examples of Islamic architecture in Andalusia (the other is the Alhambra in Granada). It also houses, in its vast interior, an exquisite Cathedral. While the mix of styles is confusing – and a blasphemy to some – the result is the best of both worlds in one incredible building. 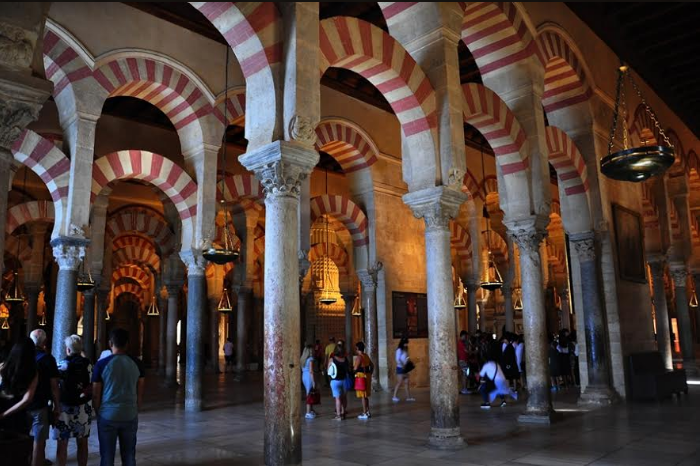 It offers a peek into a past where civilisations cleaved and coalesced in equal measures. It offers a multi-layered way of seeing the world - Visigoth, Roman, Byzantine, Caliphate, Arab, Gothic, Renaissance and Baroque, all under one roof.

Arab chronicles recount how Abd ar-Rahman I purchased half of the Hispano-Roman church of San Vicente for the Muslim community’s Friday prayers, and then, in AD 784, bought the other half on which to erect a new mosque. Three later extensions nearly quintupled the size of Abd ar-Rahman I's mosque and brought it to the form you see today – with one major alteration: a 16th-century cathedral plonked right in the middle (hence the often-used description ‘Mezquita-Cathedral’).

Waking inside, the Patio de los is a lovely courtyard, and with its orange, palm and cypress trees and fountains forms the entrance to the Mezquita. It was formerly the site of ritual ablutions before prayer in the mosque. Its most impressive entrance is the Puerta del Perdón, a 14th-century Mudéjar archway in the base of the bell tower. The Torre del Alminar is a 54m-high bell tower for fine panoramas. Originally built by Abd ar-Rahman III in 951–52 as the Mezquita's minaret, it was encased in a strengthened outer shell, and heightened, by the Christians in the 16th and 17th centuries. You can still see caliphal vaults and arches inside. The original minaret would have looked something like the Giralda in Seville, which was practically a copy. Cordoba’s minaret influenced all minarets built thereafter throughout the western Islamic world.

The Mezquita’s architectural uniqueness and importance lies in the fact that, structurally speaking, it was a revolutionary building for its time. Earlier major Islamic buildings such as the Dome of the Rock in Jerusalem and the Great Mosque in Damascus placed an emphasis on verticality, but the Mezquita was intended as a democratically horizontal and simple space, where the spirit could be free to roam and communicate easily with God – a kind of glorious refinement of the original simple Islamic prayer space (usually the open yard of a desert home). 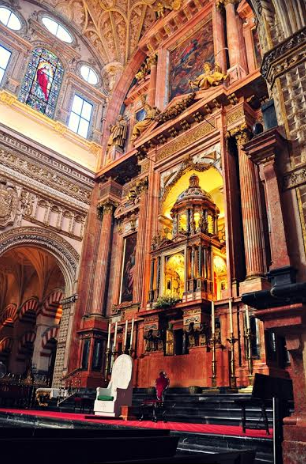 Men prayed side by side on the argamasa, a floor made of compact, reddish slaked lime and sand. A flat roof, decorated with gold and multi-coloured motifs, was supported by striped arches suggestive of a forest of date palms. The arches rested on, eventually, 1293 columns (of which 856 remain today). The Patio de los Naranjos, where the ablution fountains gurgled with water, was the oasis.

Al-Hakim II in the 960s lengthened the naves of the prayer hall, creating a new qiblah wall (indicating the direction of Mecca) and mihrab (prayer niche) at the south end. The mihrab and maksura are the most beautifully and intricately decorated parts of the whole mosque. Inside the mihrab, a single block of white marble sculpted into the shape of a scallop shell, a symbol of the Quran forms the dome that amplified the voice of the imam (the person who leads Islamic worship services) throughout the mosque. The arches of the maksura are the mosque’s most intricate and sophisticated, forming a forest of interwoven, lavishly decorated horseshoe shapes. Equally attractive are the maksura’s skylit domes, decorated with star-patterned stone vaulting.

Following the Christian conquest of Córdoba in 1236, the Mezquita was used as a cathedral but remained largely unaltered for nearly three centuries. But in the 16th century King Carlos I gave the cathedral authorities permission to rip out the centre of the Mezquita in order to construct the Capilla Mayor (the main altar area) and Coro (choir).

Legend has it that when the king saw the result he was horrified, exclaiming: “You have destroyed something that was unique in the world.” The cathedral took nearly 250 years to complete (1523–1766) and thus exhibits a range of architectural fashions, from plateresque and late Renaissance to extravagant Spanish baroque. Mass is celebrated in the central cathedral daily.

Spain was purged of its Arab-Islamic-Moor past, but Alhambra, the biggest mosque complex in Europe, survived in Granada. However, perhaps, of far greater interest is the more twisted testament to history — the Mezquita-Catedral de Cordoba. It was declared a World Heritage site by UNESCO in 1984 and in 2014, as a Site of Outstanding Universal Value.

The juxtaposition of Christian imagery and Moorish arches struck me as wild, yet somewhat sensible. The number of Moorish mosques destroyed in Spain is large. At least the Christians who built this bizarre section left the rest of the structure intact. Of course this also brings to mind the religious, cultural and political reverberations...but this is not the place to reflect on those of then and of today. The focus is more on the sensitivity of the cultural heritage, the importance of the legacy received and efforts in preserving it.

The Fall and Fall of Indian Tennis 12 hours ago

Overzealous Crackdown in Jaffna Adds to Divide 13 hours ago