The Real And The Reel: Padman, The Pad Piper and The Menstrual Man

Much before Akshay Kumar came forward with his greatly hyped Padman, two documentaries have already been made on this wonderful man who has turned the world of thousands of women who have suffered for years because of the taboo on women and menstruation around.

Arunachalam Muruganantham, now 55, is a social entrepreneur from rural Coimbatore in Tamil Nadu. He has invented a low-cost, sanitary pad-making machine and has brought unique innovations at the grassroots level to create awareness among girls and women about traditional unhygienic practices around menstruation in rural India.

TIME magazine placed him in its list of “100 Most Influential People in the world” in 2014.

Coming from a poor background, Arunachalam Muruganantham has created the world's first low-cost machine to produce sanitary napkins. According to a market research group report from AC Nielsen, "Sanitary Protection: Every Woman's Health Right", 88% of women in India are driven to use ashes, newspapers, sand husks and dried leaves during their periods. Because of these unhygienic practices, more than 70% of women suffer from reproductive tract infections, increasing the risk of contracting associated cancers. 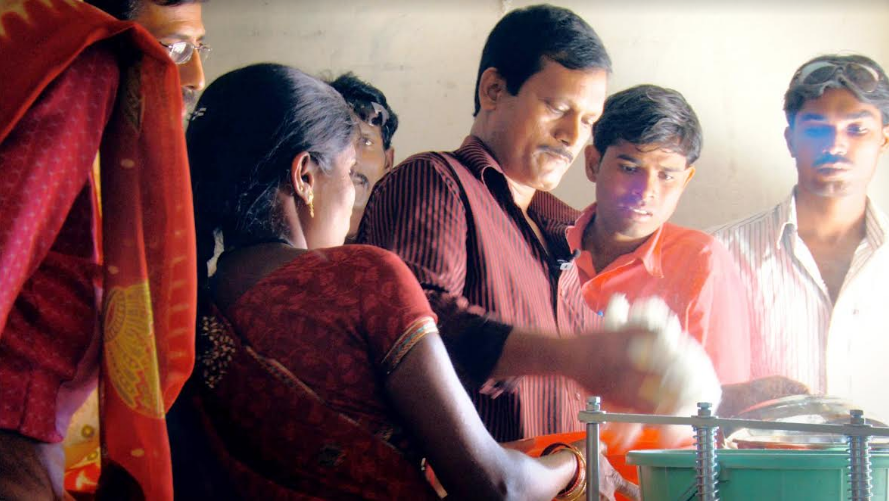 A small incident a normal man would have not even noticed triggered him to work towards a viable solution. “One day, I found my wife sneaking out of the house, holding something in her hand behind her back. I asked her what it was and after much persuasion, she told me it was a piece of rag she used during her periods. I was shocked! Why should she use a piece of rag and why hide it from me? And that set me thinking.”

This school drop-out from Coimbatore decided to develop safe and cheap sanitary pads for poor women. With limited resources, Murugantham adopted extreme methods for his research. He personally fetched used and discarded sanitary pads to take them apart and find what they were made of. Men and women would squirm at even a mention of the process and he actually did it. He was labelled a pervert by his neighbours and even his wife. He even attempted to put himself in a woman’s shoes by strapping on a self-built uterus (deflated football) filled with animal blood and tried to get through his day leaking fluid onto one of his pad prototypes.

Of the two documentaries, one, called The Pad Piper, won the Best Science and Technology Film Award at the 61st National Film Awards for “its portrayal of a sensitive man with a profound belief in appropriate technology who came up with a simple piece of engineering – an affordable sanitary napkin that has had an extraordinary impact on the health of millions of poor women.” Akanksha Sood Singh produced and directed the film which added Rs.50, 000 each to her kitty, perhaps as seed money for her next film. The Pad Piper was funded by the Asian Pitch – a consortium between NHK Japan, KBS South Korea, PTS Taiwan and Media Corp Singapore. The budget was 30 lakhs.

Sood, 36, is a natural history filmmaker making wildlife films for more than ten years. “I now head the natural history division of India’s biggest wildlife production house along with my husband,” she informs. The Pad Piper marks the intriguing crusade of Arunachalam Muruganantham, a man who struggled to solve a basic and intimate problem for women – teaching them to make and use cheap but hygienic sanitary pads they could use during their periods. 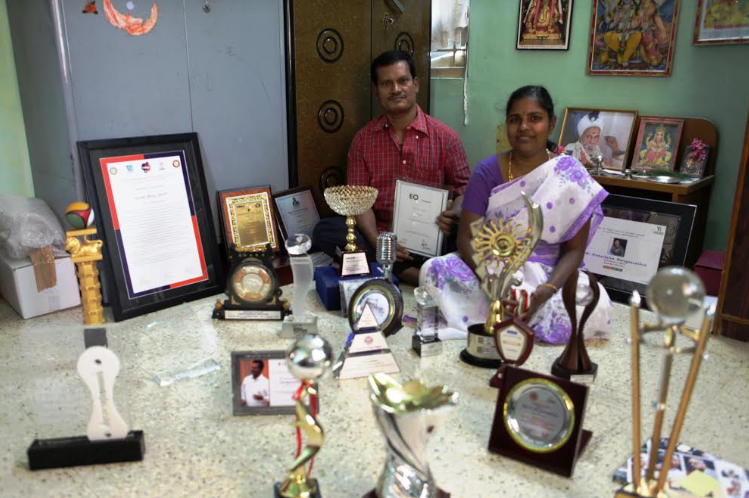 Sood Sood, who made The Pad Piper, says, “A man trying to break into a market shrouded in mystery and myth surrounding women was intriguing. The reality was shocking. I always thought women use cloth as an alternative. But sand, newspapers, cow dung? And those who don’t wear under garments? My mother, like most mothers advised me not to go to the temple or touch pickle during my periods. When I would ask her why, she did not have convincing answers. After a point, I stopped believing in these myths. Then, I wondered - what about women who are considered “dirty” when they bleed and are thrown out of the village for 3 / 5 days, abandoned in a hut with little food, no company, and no bath? Do they know they have a choice? They did not. Then Muruganantham arrived and changed their lives.”

The second film is called The Menstrual Man directed by Amit Virmani. Menstrual Man was premiered at the 2013 Full Frame Documentary Film Festival and was voted among the Top Ten Audience Favourites at both Hot Docs and IDFA (Amsterdam) the same year. It was nominated for Best Feature Documentary at the Asia Pacific Screen Awards.

Amin Virmani who studied filmmaking at Austin in Texas and now lives and works in Singapore, says, “I feel privileged to have Muruganantham as a mentor and as a friend. Just spending time with him is a great learning experience. I have included some of them in my film. He believes that no country can progress unless its women are empowered.. The greatest lesson, for me is that you do not have to wait to be successful to start giving back to society. Muruganantham never received anything from society. Yet look how much he's given to it.” Virmani adds that when he offered to fly the man to Dharamsala to watch the film, Muruganantham declined because he did not wish Amin to spend on the airfare!

Vrimani’s film had sold-out screenings at both Hot Docs (Toronto) and IDFA (Amsterdam), arguably the two most influential documentary festivals in the world. “And we were among the audience favourites at both,” says Virmani adding, “We got a lot of social media buzz because people are inspired by the story and want to share it with their friends. Rosie O'Donnell watched the film and tweeted about it, encouraging her fans not to miss the film. All very humbling but, more importantly, also a confirmation that the film's themes of hope, triumph and female empowerment resonate with people everywhere.”

Sood, like Amin, had read about Muruganantham in the papers. “The Asian Pitch was coming up and we had to submit an idea for a film. I called Muruganantham up and asked him if he could come down to film with us. He agreed readily. We – my husband, I and my four-month-old daughter spent four days with him in his house, his workshop and travelled with him to a far-off village where he was to set up his machine and train women.

That is part of his movement. He personally visits villages to train women to manufacture sanitary pads in the machine. He is a warm and welcoming person. He knows exactly what he is doing, confident of his strategy and knows that his work is unique. This simple machine has changed his life completely but the success has not gone to his head. He answers every call even when the telephone keeps ringing continuously just to say that he is busy and would call back,” elaborates Sood, deeply impressed with the man she made her first film on.

During the course of making his film, In the course of the film, Virmani spoke to a lot of women who were deeply involved in the story. I wondered if he had to overcome any embarrassment with them.“You would think that I would, and maybe I just got very lucky. All of the women I spoke with were part of institutions focused on the issue and helping women, and these women had really been embraced by these institutions. Talking about this subject is their job now,” says Virmani. “It’s a kind of new Indian woman – she’s done with being quiet and meek.”

In 2006 his invention won the award for the best innovation for the betterment of society from the Indian Institute of Technology, Chennai. Muruganantham got an Indian presidential award for innovation. Currently more than 600 machines made by his start-up company, Jayaashree Industries, are installed across 23 states in India. He sells the £1,600 machines directly to rural women through the support of bank loans and not-for-profit organisations.

A machine operator can learn the entire napkin-making process in three hours and then employ three others to help with processing and distribution. Each machine can produce 120 napkins per hour. Contrary to large-scale production models that need an initial investment of Rs.3.5 crore, Muruganantham’s machine is available for approximately Rs.75,000.

Women now produce and sell sanitary napkins directly to customers instead of through middle-men and retail sales. Each machine provides employment to ten women who can produce up to 250 napkins per day which keeps costs as low as Re.1 per napkin.

Local saleswomen canvas the product widely which has made thousands of women convert to this cheaply made and hygienic napkin. It has wiped out the taboo on mentioning words like ‘menstruation’, ‘periods’ etc among both men and women. This leads to an open sharing of information about menstrual hygiene and safety. It also leads to environmental cleansing otherwise polluted by the waste dumped when women discard what they have used in the streets and the wilds.

Twinkle Khanna who has produced Padman claims that she has chronicled this man’s life in the final short story of her second novel The Legend of Lakshmi Prasad titled The Sanitary Man from A Scared Land. She has traced his journey from nobody to being awarded the Padma Shri by the Indian government for revolutionizing the sanitary pad industry worldwide.

Within this scenario of a school drop-out who took his mission seriously because he was concerned about his wife and other relatives, where does a fictionalized Bollywood mainstream film feature fit in?

Let us wait and see what the glamourized and media hyped image of Muruganathan portrayed by Akshay Kumar and his wife played by the sensual Radhika Apte have to offer – glamour, a social agenda, or a politically manipulative blend of the two?