Art On A Plate

Abha Kohli is certainly not the average baker

Artists in any form are creative and represent not the outward appearance of things but their inward connotation…In my view they are born magicians! The secret lies in the artist presenting not what he or she sees but what we as outsiders see and perceive. The beauty created by them often leaves one spellbound.

It is not often that I get gobsmacked… But when I came across Abha Kohli – a baking connoisseur, I was most certainly impressed by her creativity. She is not the average baker you meet daily - Abha is a Graphic designer, an alumnus of the National Institute of Design, Ahmedabad. She worked as a designer for several years before switching over to confectionery, after the birth of her daughter, Maya which led to her brand being called ‘Maya Handmade Chocolates’.

She started off making only flavoured chocolates. With no professional training in the field, she spent years reading up every book/ blog/ forum she could find, experimenting with recipes and techniques and in the process breaking and bending many, many rules. Rules are meant to be broken in any case, aren’t they?!

After a while she expanded her menu to include baked goods, simple tea cakes, and cookies. About a year into the business, in 2007 she was critiqued by the then food columnist at Times of India, the late Sabina Sehgal Saikia. Not the type to mince words, Sabina promptly trashed the sole eggless cake on the menu. Fortunately, the rest of the menu more than passed muster, and when the review was published that weekend, it was favourable beyond expectations. This provided a much needed validation and impetus to the fledgling venture. 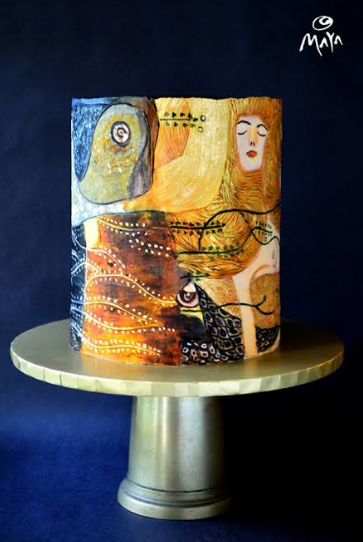 In 2009, Abha was invited by Good Housekeeping India magazine, to conduct a chocolate workshop at their annual show. These workshops proved to be most popular and subsequently led to conducting a weekly online chat as a Chocolates and Dessert expert on one of their women's portals.

In 2011, Maya Handmade Chocolates was reviewed by food writer and critic Marryam Reshi. Again, the review was extremely favourable with a ranking at par with professionally trained confectioners. For a home-based business, set up like a cottage industry with a workforce of one, there could be no greater encouragement.

Soon after that, Abha expanded her repertoire to include decorated cakes, tiered cakes, and cakes with themes. Her focus was decoration which would be completely edible, so she created decorations with chocolate, her most favoured material.

From making plain tea cakes, when being asked to write a message on a cake would send her into a complete tizzy...she now creates cakes of all types, which brings me to her most favourite range of art-based hand painted cakes. I confess, these are absolutely delightful and a treat to the eyes…the taste heavenly and ‘yummalicious’ if ever there was such a word! 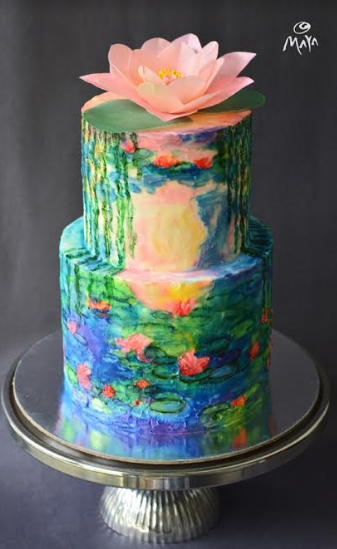 I call her brilliant work… Art On A Plate… How does one eat art that looks so attractive that when you see it, you naturally want to place it on a pedestal as a decorative piece and not cut and devour it in minutes! Sacrilege! Abha has painted Van Gogh, Monet, Klimt, and Miro on cake, and is waiting eagerly to see what comes up next. She paints with coloured chocolate, on chocolate, with edible colours, edible metallics, you name it. Extremely particular about the quality of colours she uses, she sources the best edible materials from across the globe.

The art-based series of cakes started as one birthday cake for a friend's daughter who wanted Starry Night by Vincent Van Gogh. Nobody was quite prepared for what emerged from the exercise of mapping a 2D image onto a 3D cylindrical cake. Most clients are not aware that a painted image will not match the dimensions (circumference and height) of a cake, especially when the cake is sized according to the number of servings a client wants. It was a challenge, painting a distortion less replica, and adding additional areas in the same style as Van Gogh. It was a larger challenge painting the entire cake in coloured chocolate, using only a tiny palette knife to recreate the master's brush strokes, that too in the middle of Delhi's winter!

After the huge success of that cake, there were many takers for the same design. Abha created one more Starry Night cake, and then regretfully turned away subsequent orders, because that took away from the charm of customisation, as well as the fact that the repetitiveness was tedious.

But it was a style of cake she really enjoyed creating, and found she drew heavily on her are and design sensibilities while doing so.

For another friend turned client, she created a single-tier chocolate replica of Water lilies by Monet. Then followed a two-tier version of the same painting, again in coloured chocolate.

By the time an art curator friend's birthday rolled around, there was lengthy discussion on potential artists for reproducing on cake, between Mondrian, O'Keefe, Raza, Souza, Gaitonde, eventually settling on a mutual favourite, Joan Miro. Abha used a different method for painting this time, using edible paints instead of coloured chocolate, but still painting on chocolate, not fondant. Adding to the complexity was replicating two of Miro's paintings on the same cake, instead of just one single painting.

The most recent cake in the series, Water Serpents by Gustav Klimt, also underwent several discussions and brainstorming. Painted on a chocolate base with edible colours and edible gold paint, and using a sculpting tool to create fine strokes, it was the most creatively satisfying cake for Abha.

Abha is looking forward to continuing with the art-based painted cake series, recreating in edible miniature what famous artists have painted on large canvases. Once a design is finalised, it is almost a meditative process, trying to slip into the mind of the artist, to understand their use of colour, their brush strokes, characteristic elements in the artist’s works. Recreating their art is her homage to artists who have influenced her life. The transience of the edible art makes it even more precious and memorable.

In 2016, Abha also started conducting classes on cake decoration, and finds a wide audience of budding bakers who come from different parts of the country to learn from her. She divides her time between designing her own cake orders, teaching cake decoration, and teaching Graphic Design at the School of Planning and Architecture.

Abha’s baking has evolved to a level of exquisite accomplishment. It is no less precise than chemistry: an exquisite transfiguration. She works with precision and delicacy. The faint scent of vanilla and chocolate waft through her kitchen with promises of decadent and heavenly cakes. Her magical fingers produce masterpieces that flaunt grandeur and take it to another level entirely!

A Cafe in an Igloo in Gulmarg 1 hour ago

The White Tiger: A Different Beast Altogether 1 hour ago

In Photos: Inside Ghazipur’s Dairy Farm, Gutted in Massive Fire

Talks Off For Now, Farmer Leaders Call for a Peaceful Kisan Parade on Republic Day