Happy Birthday Mrinal Sen (May 14): Up Close and Personal

'Respect people by giving them equality

Before he shifted to his present residence at Bhawanipur, Mrinal-da lived in a small flat at Beltala Road, just a hop away from where I live. His late wife Gita kept open house with people walking in and out at all hours of day and night, munching fistfuls of puffed rice and fritters downed with endless cups of tea. It was difficult to identify him as one of the most outstanding filmmakers India has ever produced, so informal was he, filling us with anecdotes and barbs pointing at himself.

I decided to pay him a surprise visit on my 60th birthday. When I touched his feet, he allowed me, which he generally does not. He asked me how old I was and when I said I was 60, his prompt response, with a hint of disappointment, was, “Oh, so I cannot have an affair with you anymore!” This is what Mrinal Sen is, beyond his brilliant work as a filmmaker par excellence who wears his celebrity status, his international fame and his brilliant very lightly on his slender shoulders.

Another time he said, “You know, earlier, Indian couples had lots of children. Today, it has dwindled down to just one or two. It was a blessing in disguise.” When I asked him why, he said, tongue firmly in cheek, “One child among many is bound to be a failure. He/she is the one left to do the odd jobs when the parents become old. This ‘failure’ of a child calls the doctor, pays the bills, fetches the rations, goes to the post office and does everything we cannot do when we get old. Today, with one or two children who succeed in life and fly away to success stories, old and ageing couples need to fend for themselves.”

Perhaps he had a point. The Sens have an only child, Kunal, who, however, is extremely caring of his parents and though he resides and works abroad, visits his parents a couple or more times every year, specially after his mother, Gita Sen’s illness who passed away last year. Sen himself was one among many sisters and brothers.

The first time this critic interviewed him in 1971 in his modest flat behind Priya Cinema, someone in the crowded room pointed out a photograph of his wife Gita Sen published in a magazine. His joy was like a little boy’s. He turned to his wife standing behind and said, “I feel very happy when I see your photograph in the papers.” His wife responded with her typical silent smile. But that single sentence made his love for his wife a tangible presence in the room.

Once, in another interview, he was asked how he never fell in love with any of his leading ladies, a common trend among celebrity directors like Antonioni, Bergman and so on. He laughed loudly and said – “Look at my face. Don’t you see that I am not attractive enough to draw the attention of young heroines? Besides, I was married before I stepped into films and my wife Gita was in theatre. I hardly had the opportunity to play around. There was too much of struggling to do. Manik Babu (Satyajit Ray) on the other hand, was an extremely handsome man. It was natural for actresses to fall for him. At least one of them did.”

Kunal Sen is not known for talking much about his father, much less, writing about him. Recently however, Arindam Saha Sardar who has founded a classic archive called Jeebon Smriti, along with Focus, ,persuaded him to write a piece on his father, perhaps for the first time. At one point, Kunal writes, “There is a stark distinction between how we remember a public personality. For most of us, we are only remembered by our personal friends through the lifetime of interactions we have of them. It is somewhat different for celebrities. We know them through their word and their public persona. In that respect, since my father only made serious cinema, on somewhat heavy subjects, people may easily imagine him to be a very serious person even a bit dark (not just in his skin complexion). While he can be very intense at times, he has a lighter side that rarely comes through in his work.” 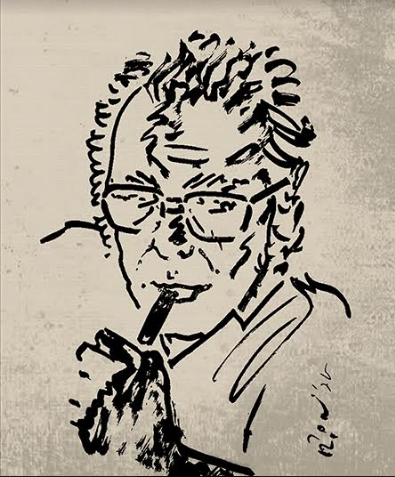 Mrinal Sen’s entry into films was almost an accident. “It happened when I was in college. A voracious reader, I would regularly frequent the Imperial Library, now called the National Library, in Calcutta. I read everything from Marx to Nietzche, from Shakespeare to the Shahnama.

One day, as I was relaxing with cards in the catalogue room, I chanced upon Rudolf Arnheim’s historic book, Film. The book was riveting and even charismatic. This led me on to read everything and anything on cinema. I was also wearying of the crop of Indian and American films I had begun to see. The love for books on cinema inspired in me the love for good cinema.

This, juxtaposed against the real-life experience of watching films I did not quite care for, egged me on to write on the subject. I wrote articles on the dialectics of cinema, which were published in papers. Then, I got more directly into direction. I directed a film. It was called Raat Bhor (1956.) As I look back, I see I was destined to be a filmmaker though I was never trained to be one. It was really pure accident. What else could I have been - a loafer loafing about without any sense of direction or aim?” he asks, unassumingly.

Born in Faridpur district in 1923, (now in Bangladesh), Sen arrived in Calcutta in 1940 to do his graduation. The experience was depressing and he missed the intimacy of a small-town neighbourhood where everyone knew everyone else. But he did not remain an outsider for long because "I underwent a metamorphosis. Through increasing interactions of diverse kinds, with people around me, close to me and not very close, through continuous exposure to world events and domestic chaos piling up at an incredible pace, I was beginning to change" says Sen.

Around this time, he read the last manifesto of Tagore - The Crisis of Civilization. This made him see wisdom. At the end of it all, Sen discovered that Calcutta had become an inseparable part of his entire existence. He had grown to love it. Over the years, his growing love-hate relationship with the city "till today, acts both as my stimulant and an irritant. I am both touched and shaken by its vibrancy and youthfulness, its humour and flippancy, and indeed, by its tragic dimension, by its greatness and its meanness."

Che Guevara once said, “respect the people by giving them quality.” Mrinal Sen has lived this dictum over his 50-and-odd years as a filmmaker. Let us see how. According to the Indian government, the two-month-long confrontation at Kargil on the Kashmir border between the two then-recently nuclearized neighbours, India and Pakistan, took a toll of 1300 lives in India and the figure in Pakistan stood at over 1750.

One evening, in 2002, while on his frequent trips to the capital as Member of Parliament in the Upper House, filmmaker Mrinal Sen happened to switch on the television in the cool comfort of his hotel room to watch the news. Rajdeep Sardesai of NDTV was interviewing a cross-section of people in Islamabad from bureaucrats and politicians to the man on the street.

“At one point, the camera caught a vegetable seller spreading vegetables at the corner of a pavement. The street was crowded, so Sardesai asked the man to say something about the war. The man, possibly illiterate, looked back, looked up, over the shoulder and uttered a single word – nooksaan and went back to what he was doing. Alone in my hotel room, his comment shook me,” said Mrinal Sen when asked what set off the trigger for his last film Amar Bhubon.

“I felt that his double on this side of the border, irrespective of caste, creed and nationality, with a vocabulary identical to his colleague on the other side, would perhaps respond similarly to his comment on the war. It obviously means a lot more than what the word literally means,” he summed up.

He does not make films anymore. But this does not mean he will be forgotten. He will be remembered for himself, perhaps much more than for his films for those who have met him up close.