Her second feature film selected for Un Certain Regard

"I don’t see acting or direction as professions. I see them as a means to an end. Manto’s unflinching faith in the redemptive power of the written word resonates with my own compulsion to tell stories. In some mystical way, I feel I am part of that hopeful legacy! I feel Manto is more relevant today than he ever was. That’s why I feel compelled to tell his story. Of course, he was a great writer, but more importantly, a free thinker and a humanist. The only identity that mattered was that of being a human. No part of existence remained taboo for him. I hope that through this film these ideas will reach audiences." As told to Uma Da Cunha

Why this particular bio-pic? Is it a mainstream or an indie film?

I first read Manto in college. He wrote with a rare sensitivity and empathy for his characters. I wanted to film his short stories long before my first film, ‘Firaaq ‘(2009). It was in 2012 when I read his essays that I got to know more about the person behind the writer. Plunging into Manto’s life, I realized why he seemed so familiar. My father, Jatin Das, an artist, is a lot like Manto. He too has refused to be a part of the art ‘market’, is blunt and honest, and therefore a misfit who is often misunderstood.

I find labelling films less and less useful. Ultimately, cinema is an artistic expression. All of it needs funding. The producers need their money back, however small or big the budget maybe. ‘Manto’ is indie in spirit, yet accessible.

How does Manto connect with today’s India and to you as a woman director?

In India, we know little about our own writers and artists, and through them, their personal trajectory and the times they lived in. I have focused on Manto’s most tumultuous four years in two cities where he lived: Bombay and Lahore. The Partition triggered his most powerful writings. Unfortunately, India’s fault lines have not changed much in the 70 years since Manto’s time. More than ever, he remains relevant. Today’s issues of free expression, religious intolerance, jingoism… are all addressed in his writings. It is no wonder that Manto’s writings continue to be so popular.

I am a director who happens to be a woman. My gender, just as my upbringing, my life experiences, my class, my education and my interests, have an influence on the sensibilities of my films, but they are often not conscious choices. Some are surprised that both ‘Firaaq’ and ‘Manto’ are not woman-centric films, suggesting that a woman, or a feminist, must make films only on women-related topics. Women, as men, are impacted by many issues and have a point of view on them. For me, in any case, Manto is a celebration of a feminist man, though he too was averse to labels. As a Cannes jury member, how does it feel to officially have your film in the same festival?

I was on the Cannes main jury in 2005 and again in 2013 on the short film jury. I have also attended the festival many other times as a film lover and to seek funds for my film on Manto. Cannes is the world’s most celebrated festival. It truly manages to combine great cinema, a thriving platform for filmmakers and film lovers from all over the world.

In India, film festivals are either put on a pedestal or dumbed down as pure publicity. Since it basically provides the film a discerning world audience, why should a film not start its journey there? Finally, you want to reach your right audiences.

Does being a two-time Cannes jury member give you an edge over others?

Not at all. It may help in ensuring that the selection committee sees the film, but it does not impact the decision. As you know, the list of Cannes winners and jury members, who are not in Cannes or in competition, is long. For instance, two-time Palme d’Or winner and jury president, Emir Kusturica’s film was not selected a few years ago. I learnt of my film’s selection in Cannes the morning the results were officially announced. Many assumed I would know the verdict long before.

What do you feel about today’s struggle for free expression?

Today we have many kinds of censorships: people self-censor fearing trouble, right-wing groups adopting moral policing and the official censoring body getting more and more subjective and arbitrary. Manto himself was tried for obscenity six times - all for the writings that are celebrated today. He wrote: “If you can’t bear my stories, it is because we live in unbearable times.”

'Manto' is relevant not just in our South Asian sub-continent, but across the world. Societies grow and develop with free speech. If you silence it, then what hope do we have? Today, our media and civil society are being silenced. So, 'Manto' should provide us with great inspiration to speak up.

Any apprehensions on the film’s political stand?

Not at all. This film is about a writer’s convictions and courage amidst attacks on freedom of expression. For me, everything is political. Not taking a stand is also a political choice. Both ‘Firaaq’ and ‘Manto’, born out of my socio-political concerns, are manifested through personal stories. While it may give rise to an unnecessary debate, I am confident that people will see that it is simply a human story, the kind that stirs our hearts and minds.

How did you get your producers on board?

Finding funds was a huge challenge. After much scouting, I finally had three investors/producers. The most unconventional of them is HP Studios, an endeavour of Hewlett-Packard (HP). 'Manto' is their first venture. HP being the official partners of Cannes Festival for the last 13 years, I encountered their personnel often on my many visits. In 2016, I met their Global Head of Marketing for print, Vikrant Batra, who spontaneously committed to the project as he found a natural connect with their tagline, ‘power of ink’. Since then, they have also contributed to equipment and much of the printing needed for production design. The COO of Viacom18 Motion Pictures, AjitAndhare, came next as a supportive ally, bringing his experience in marketing and distribution. Then there is NamrataGoyal, a young and passionate producer who set up a company called FilmZtoc that intends to tell compelling stories. She has lent her unflinching support to the film too.

I have also set up my own company for this film. I didn’t realize that I would end up actually producing the film. The company is called Nandita Das Initiatives and I hope to explore different forms to tell stories that need to be told.

Will its international launch pave the way to 'Manto’s release in India?

Except possibly for big Bollywood films, marketing is always a challenge. Visibility is key. One must create a buzz that reminds audiences of a film’s existence. I don’t judge audiences. Both, a festival audience or a small town one in India, are equally important. A filmmaker wants to reach the largest number of people.

‘Manto’, by far, has been the most challenging experience of my life. From researching to writing to gathering funds, cast and crew, to producing… everything has been a huge learning curve. But all of this is to reach the audiences and that will be the true test. 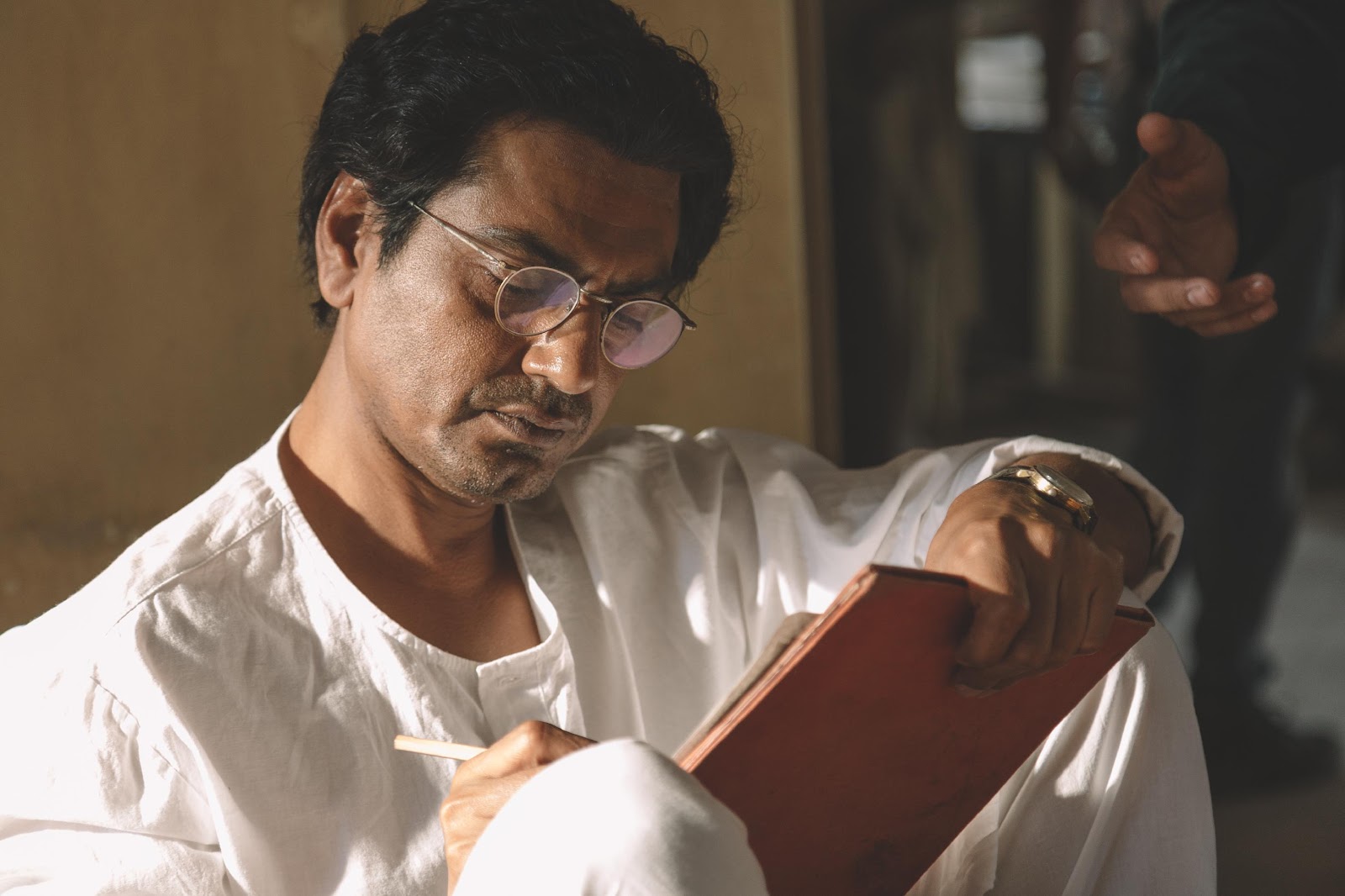 How was it to collaborate with Nawaz?

I always had Nawazuddin in mind for the role of Manto while writing the script. In fact, I told him in 2013 in Cannes when I was in the short film jury, and he was attending the festival for ‘Monsoon Shootout’. We were both excited to work together once again after ‘Firaaq’.

It is said that if you get the casting right, 70% of your job is done. With Nawazuddin that’s exactly what I felt. I couldn’t have got a better actor to portray a complex character like Manto. I brought in my research from books and many gems from Manto’s family. Nawaz brought with him his life experiences and his talent. Together, I think, we have managed to bring out many subtleties and nuances to the character of Manto. Not to mention his natural instincts. Also, Nawaz has many traits that are similar to Manto – deep sensitivity, intensity, anger and wit. These innate qualities in Nawaz helped him become Manto on screen, seemingly effortlessly.

There have been many magical moments with Nawaz. And I truly feel that our actor-director relationship struck a perfect chord. I think this is so important in a film like this.

Nawaz worked with you for the first time in ‘Firaaq'. How did your association develop and what was he like back then, as a person and as an actor?

'Firaaq' was my directorial debut and Nawaz’s first film where he played a significant character. I saw his short film ‘Short Cut’ and immediately decided to cast him in ‘Firaaq’. Once Nawaz was on board, the rest of the casting was done with him at the core of the story. He was a natural then and he is a natural now. Yes, what has changed is his busy schedule, which led to a few logistical challenges. But he has remained the same.

How did you cast the other actors?

RasikaDugal, who plays Manto’s wife Safia, was also someone I had in mind from the time I was writing. She is an amazing actor and a delight to work with. She effortlessly got into the skin of her character. I have been fortunate to have many eminent and good actors who have supported me by doing cameos in the film, like Rishi Kapoor, PareshRawal, Gurdas Mann, RanvirShorey, DivyaDutta, Chandan Roy Sanyal,NeerajKabi…the list is long. Even JavedAkhtar acted for the first time in a film!

What next for you as a director and/or an actor?

There are producers who have offered me interesting scripts, as also film roles. But for now, I am immersed in ‘Manto’. I am not thinking beyond it.