The Sweet Side of Dilli

Old Delhi for the sweet toothed

Delhi is a super busy cosmopolitan city whose denizens are often left grappling with the tough side of life. Weather extremes, traffic snarls, road rage, waterlogging, poor sanitation… the list is long. But Delhi has a sweet side as well, which makes the struggle of daily existence a little easier.

There’s phirni, jalebi, khurchan, rabri and daulat ki chaat among other traditional sweet preparations that are available for Dilliwalas to indulge in.

While the city is full of chains of sweet makers selling their stuff in new age swanky restaurants, Old Delhi has some exclusive sweets on offer, that too, at affordable prices. 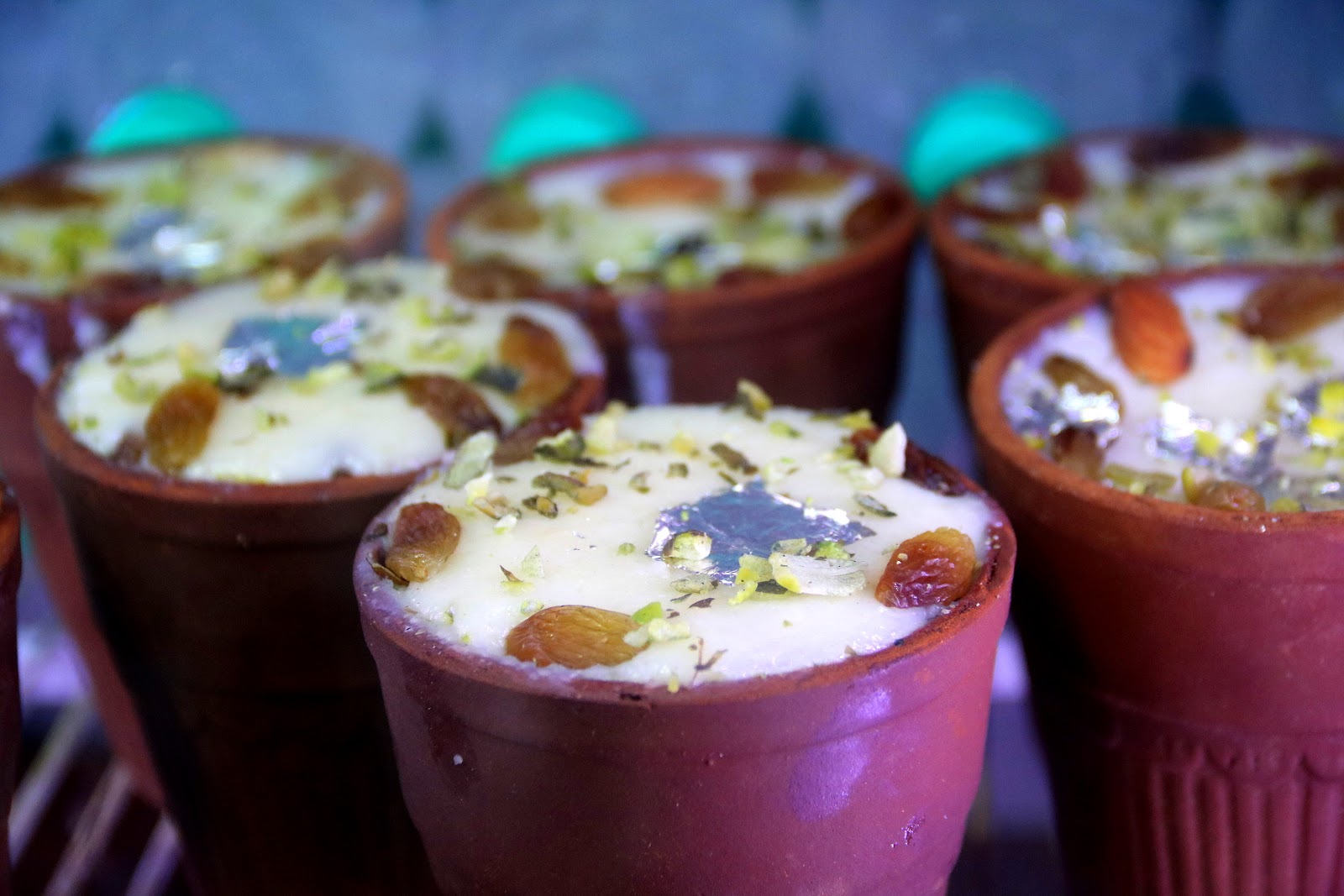 Phirni is today the sole preserve of Old Delhi. Sometimes restaurants open up in other, newer parts of the city claiming to offer a taste of Old Delhi food, and to underline that claim they include phirni in their menu. But more often than not they don’t make it themselves. They simply source it from Old Delhi.

Phirni is basically a rice pudding made with rice and milk cooked for a long period over a low fire, then set in an earthen dish and finally garnished with almonds and pistachios. It is then chilled in a refrigerator and taken out a short while before being served. It carries a light sweet taste. The earthen dish in which it is served lends its own feel to the act of consuming it. 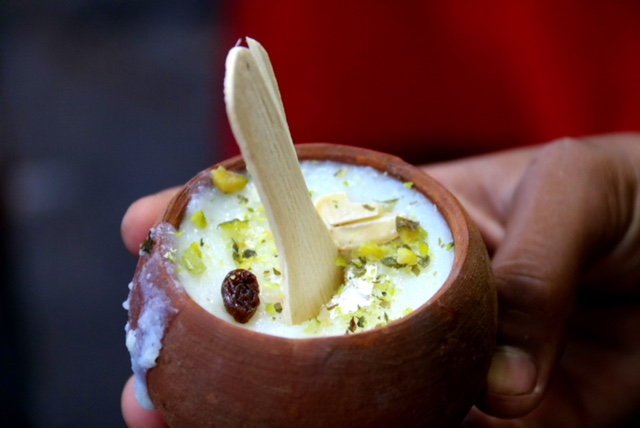 Importantly, to have good phirni one has to go to the Jama Masjid area (Matai Mahal). There are several standalone outlets and stalls here (many are named Cool Point) selling essentially phirni. Most of the sit-in restaurants here have only one item in the dessert section of their menu, that is, phirni. As it is difficult to have your fill of it in one visit, it is recommended that you get some packed for home. Since it’s set in an earthen dish it’s convenient to get it packed and carry it home. 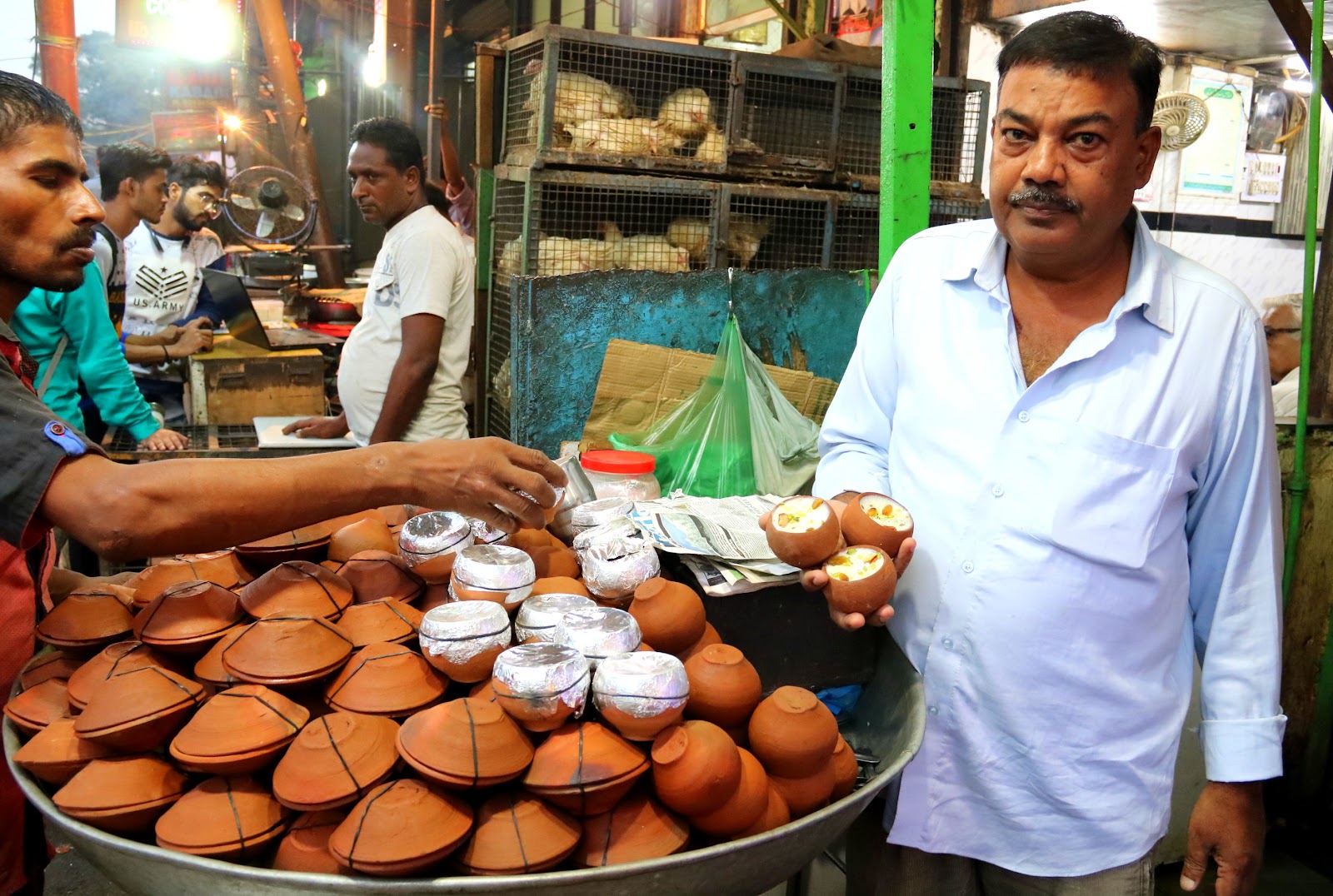 Rabri khurchan is another milk-based slightly sweet preparation from Old Delhi. The making of khurchan is a job that demands patience and time. Milk is placed over low heat in a large, shallow pan. Every few minutes a skin of cream will develop on the surface, and every time this membrane forms it is carefully taken out and put in a separate container. Over time when enough such cream has been collected, it is flavoured with sugar, saffron and other dry fruits. It has a delectable texture and a mildly sweetened taste. Very easy on your palate. 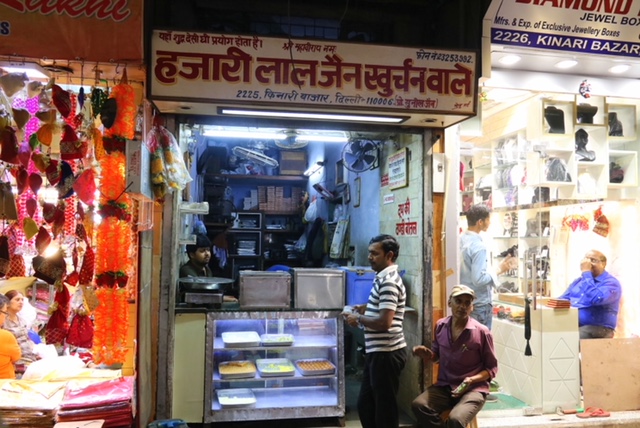 Paranthe Wali Gali, though renowned for its fried paranthas, is also a great destination for rabri khurchan. One such outlet is Pundit Gaya Prasad Shiv Charan (shop number 34). Take a left turn from the parantha outlets and continue on the Kinari Bazaar, and in a while, on your left you will find another outlet specialising in this sweet delight. It goes by the name of Hazari Lal Jain Khurchan Wale. This khurchan making shop was started by Gauri Shankar Jain, from Uttar Pradesh nearly 100 years ago and is now being run by his descendants. 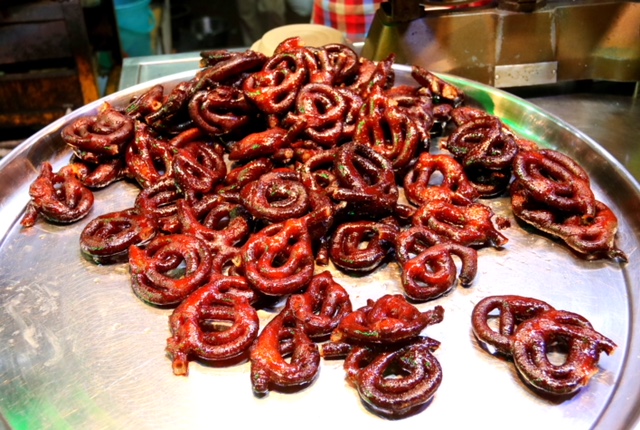 Mawa Jalebi is akin to the new kid in town. A very popular sweet preparation that originated in Burhanpur, Madhya Pradesh, the dish has climbed the food popularity charts in Delhi in the last couple of years.

These jalebis are fashioned using khoya and water chestnut flour (as a binding agent). Then they are shaped and deep fried in a shallow pan like regular jalebi and dipped in sugar syrup. The moment they are fried they attain a distinctive deep reddish-brown hue. They are very sweet to taste and somewhat like a traditional gulab jamun in texture. 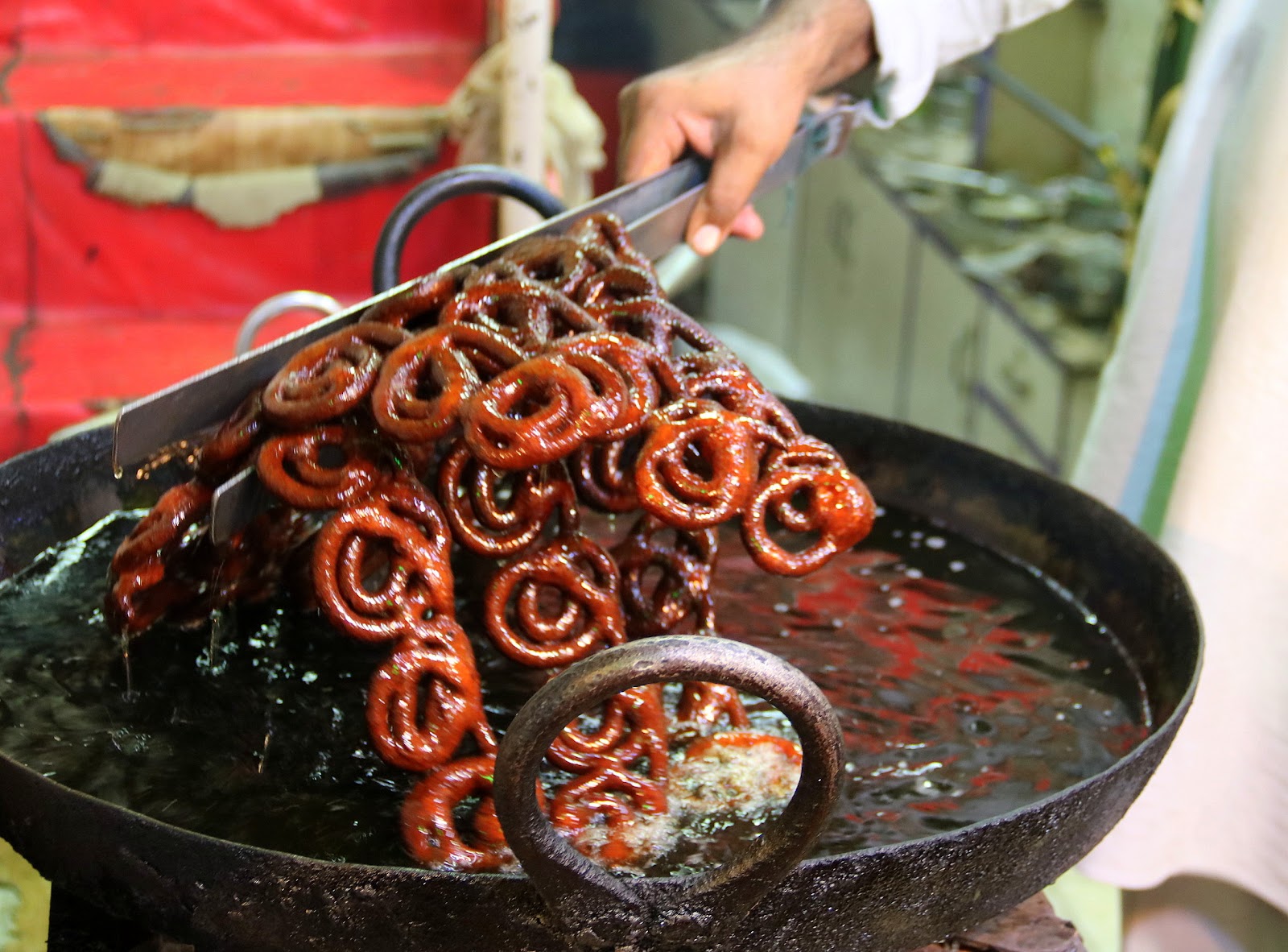 A shop specialising in mawa jalebi opened at Matia Mahal a few years ago. The owners have a few outlets dedicated chiefly to mawa jalebi in Burhanpur, Indore and Mumbai among other places. In the last couple of years, since appearing in Old Delhi it has garnered a dedicated fan following. Do try it the next time you are there. But be warned. It is a very heavy dish, almost too sweet, and you will need a strong digestive constitution to deal with it. 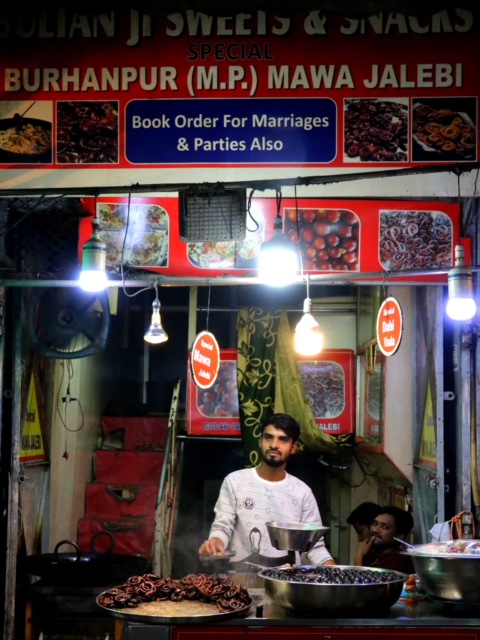 The thick variety of jalebi (sometimes called jaleba) is another sweet that is nowadays available only in Old Delhi. I have been to at least three places here that sell thick jalebis. And I came across another shop selling a similar make of jalebis in Paharganj's Baratuti Chowk, near the New Delhi railway station. 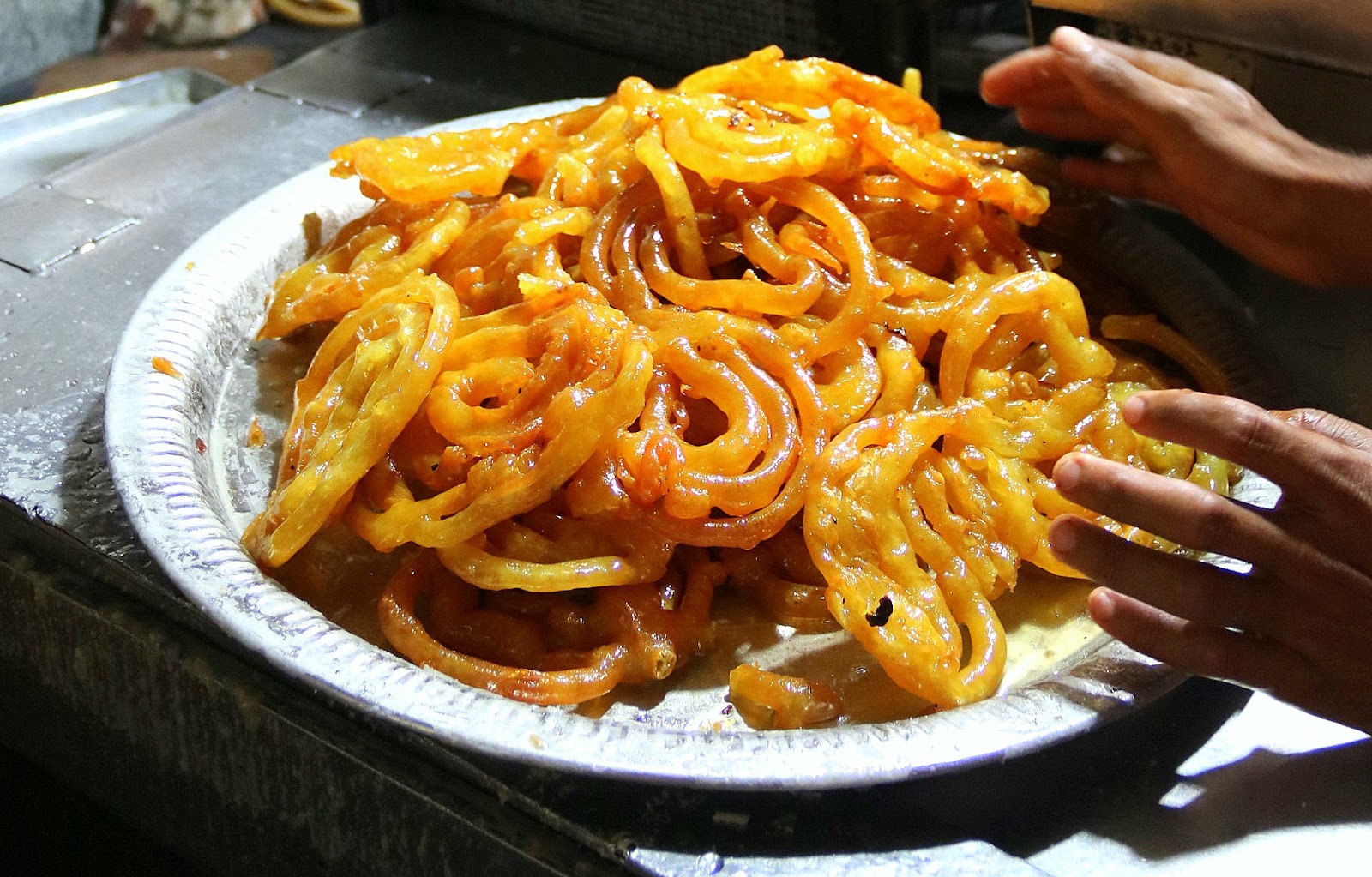 When consumed piping hot and steaming nothing can beat the experience of having a jalebi. It represents the perfect balance of crispness and chewiness. Yes, it is too sweet, with hot sweet syrup pouring out of it, but then that’s what it is all about. 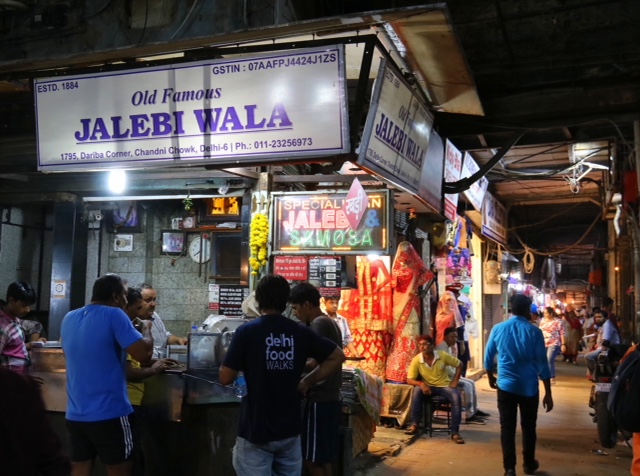 Chandini Chowk main road has an outlet serving the best and most famous version of these jalebis. Started by one Nemi Chand Jain, it claims to have been doing this since 1884. The place carries a name which makes things very obvious. It is simply called Old Famous Jalebiwala. Here jalebis are made using desi ghee and cooked over a charcoal fire. It is a very popular outlet and an essential destination for all organised food walks in Old Delhi (and there are more than a few going about nowadays). 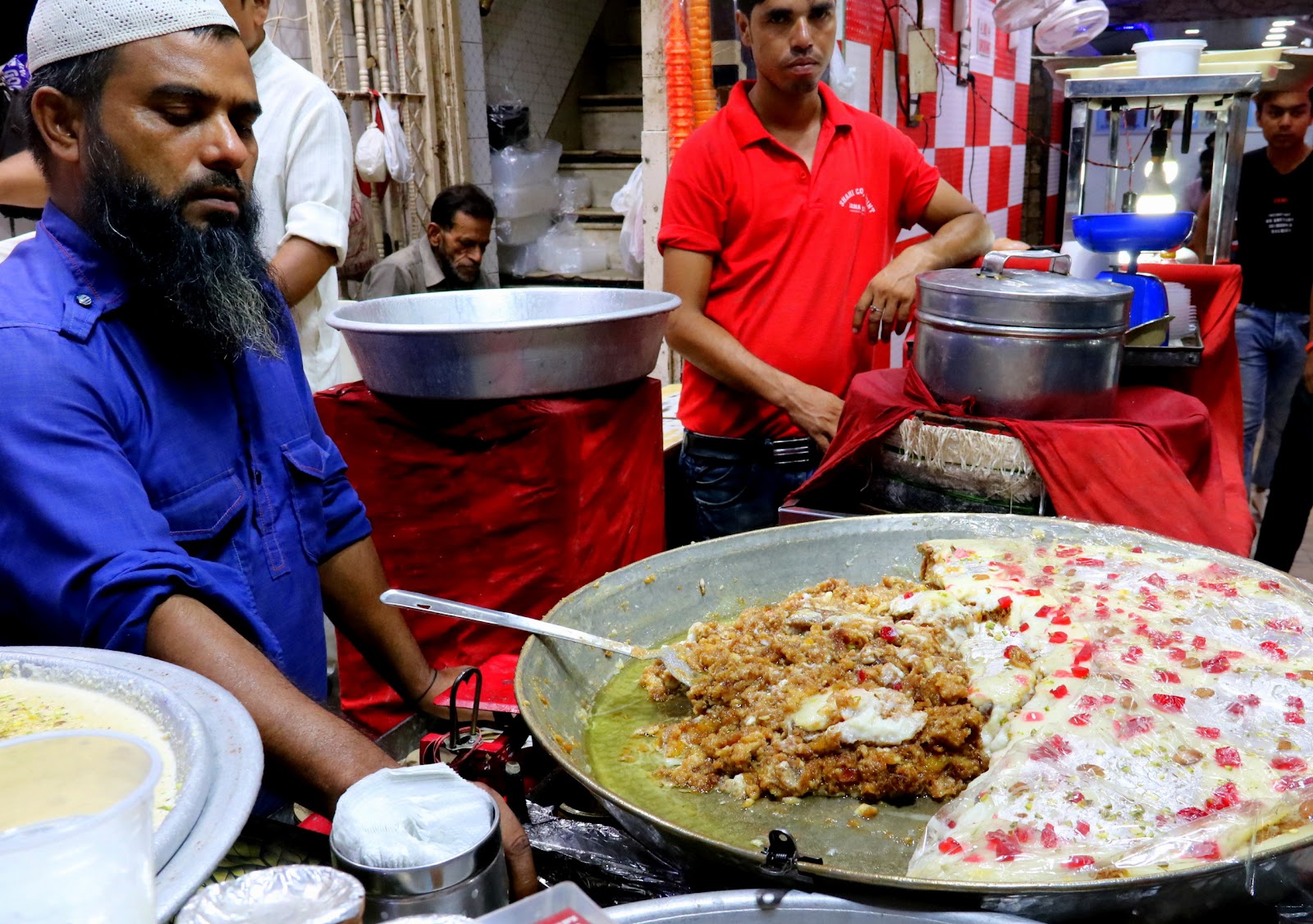 This is another quintessential Purani Dilli signature dish which is relished more in winters although in Old Delhi it is available throughout the year. Shahi tukda, as the name suggests, has a royal bent. It was developed and perfected in the Mughal kitchens of Delhi. Today Dilliwalas relish it to the hilt. Another heavy dish to contend with, it is made of fried bread dipped in sugar syrup after which it is layered over with condensed milk and finally topped with dried fruits and chandi ka warq. Its demand grows exponentially during Ramzan. Hyderabadis make a similar version of it and call it double ka metha.

With daulat ki chaat we enter the most refined, delectable and exotic aspect of sweet making in Delhi. Available only in the winter months, this dish is the prime attraction of the occasional food festivals organised in the Capital. In winter you will come across a few daulat ki chaat sellers setting up their makeshift stalls just outside the Chawri Bazar metro station, on the road leading to Jama Masjid (outside the famous Ashok Chaat Bhandar).

Daulat ki chaat could be a confusing yet memorable experience for the first-timer. To begin with, the name itself is confusing. Chaat basically brings to mind a snack that’s hot and spicy. But daulat ki chaat is sweet, albeit only lightly. This chaat is basically milk foam, which is sweetened, flavoured and then sprinkled with dried fruit. It takes up to six hours to prepare (the process starts in the wee hours of the morning). And the moment you put it in your mouth it just melts away, leaving you a little bemused. 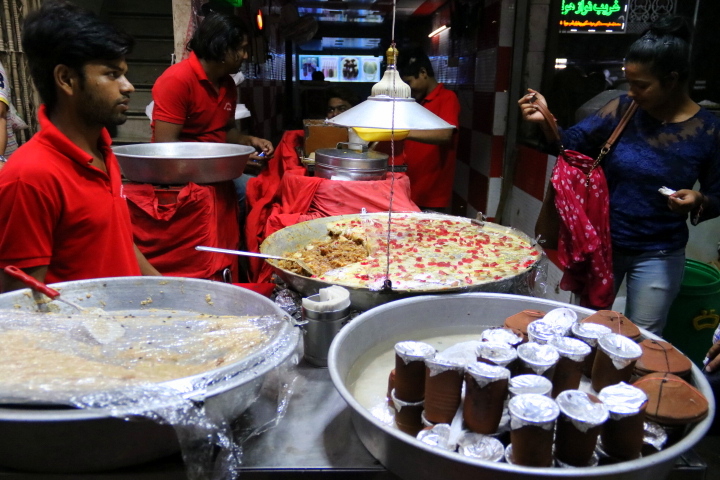 Khemchand Adesh Kumar, who is reputed to be selling the best version of daulat ki chaat sets up his stall at Kinari Bazar, at the entrance of the famous Naughara Lane (which also holds a Shwetambar Jain temple).

Still not sated? South Delhi’s Chittaranjan Park, known as Delhi's own little Bengal, boasts a few outlets selling authentic Bengali sweets. It is another distinct and alluring aspect of Delhi's affair with sweets and deserves to be explored in detail. It will be the focus of a future writeup. 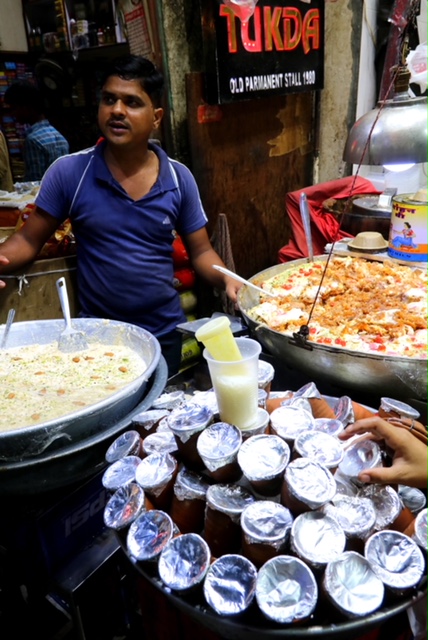