A Majestic Rise From the Waters

Held December 7 to 14, 2018, the 23rd International Film Festival of Kerala (IFFK) announced its winners to a packed audience on its closing day. The experienced and dedicated team that heads IFFK showed their grit and passion for cinema by not letting the terrible floods threaten its closure this year. 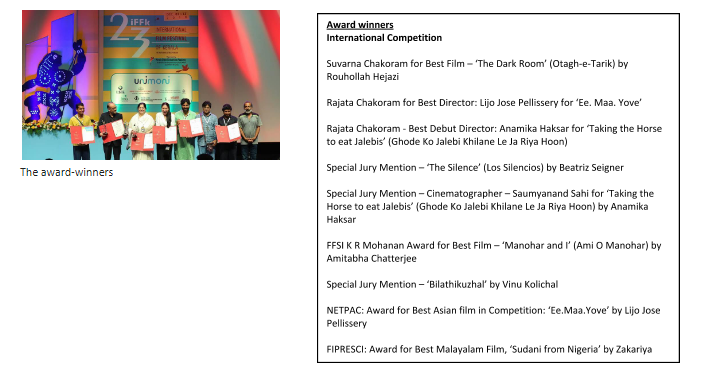 It is known that IFFK almost downed its shutters for this 23rd edition because of lack of funds, since the government funding was justifiably diverted towards the dire needs related to recent, devastating floods. Renowned filmmaker Adoor Gopalakrishnan and others in his wake then publicly stated that a closure of IFFK over this year would be demeaning and a jeopardy for this much loved and respected annual event. And so, with hurrahs sounding on all sides, IFFK 2018 was held. It ended with kudos all through and applause to its award winners.

The Kerala State Chalachitra Academy, the government institution to promote cinema, conducts the IFFK every year. Its highlight is a competition section for films from Asian, African and Latin American countries. The Golden Crow Pheasant Award is endowed with a cash prize Rs 15 lakhs for the Best Feature Film, Best Director (4 lakhs) and Best Debut Director, 3 lakhs.

IFFK Chairman and Festival Director, Shri Kamal, supported by the seasoned and enlightened artistic force behind this festival, its Vice-Chairperson, Bina Paul, managed at short notice to round up its 23rd edition and presented a showcase of international, Malayalam and other regional films that regaled its loyal, exuberant fans. The cinephiles arrived in hundreds to fill its close to 12 single screen (most of them 1,000 seaters) theatres. Despite quadrupling its fees from last year’s Rs 500 to Rs 2,000 this year for individual festival passes, the film-hungry crowds that IFFK is known for were there in full force, ignoring the heat and bustle of Thiruvananthapuram – and its mid-way one day strike called for by the BJP party.

2018 IFFK was dominated by the presence of Iranian filmmaker Majid Majidi, who was given the festival’s Lifetime Achievement Award. The renowned filmmaker (Children of Heaven, 1997, Colour of Paradise, 1999) also served on the International Jury alongside Tamil Nadu’s Vetrimaaran and Adolfo Alix Jr from the Philippines. Films from Iran dominated the festival and one of them The Dark Room won IFFK’s top award. The film is a moving story of a young boy who disappears for a while and his memory of that time is something that disturbs his father who then searches for answers relating to it. 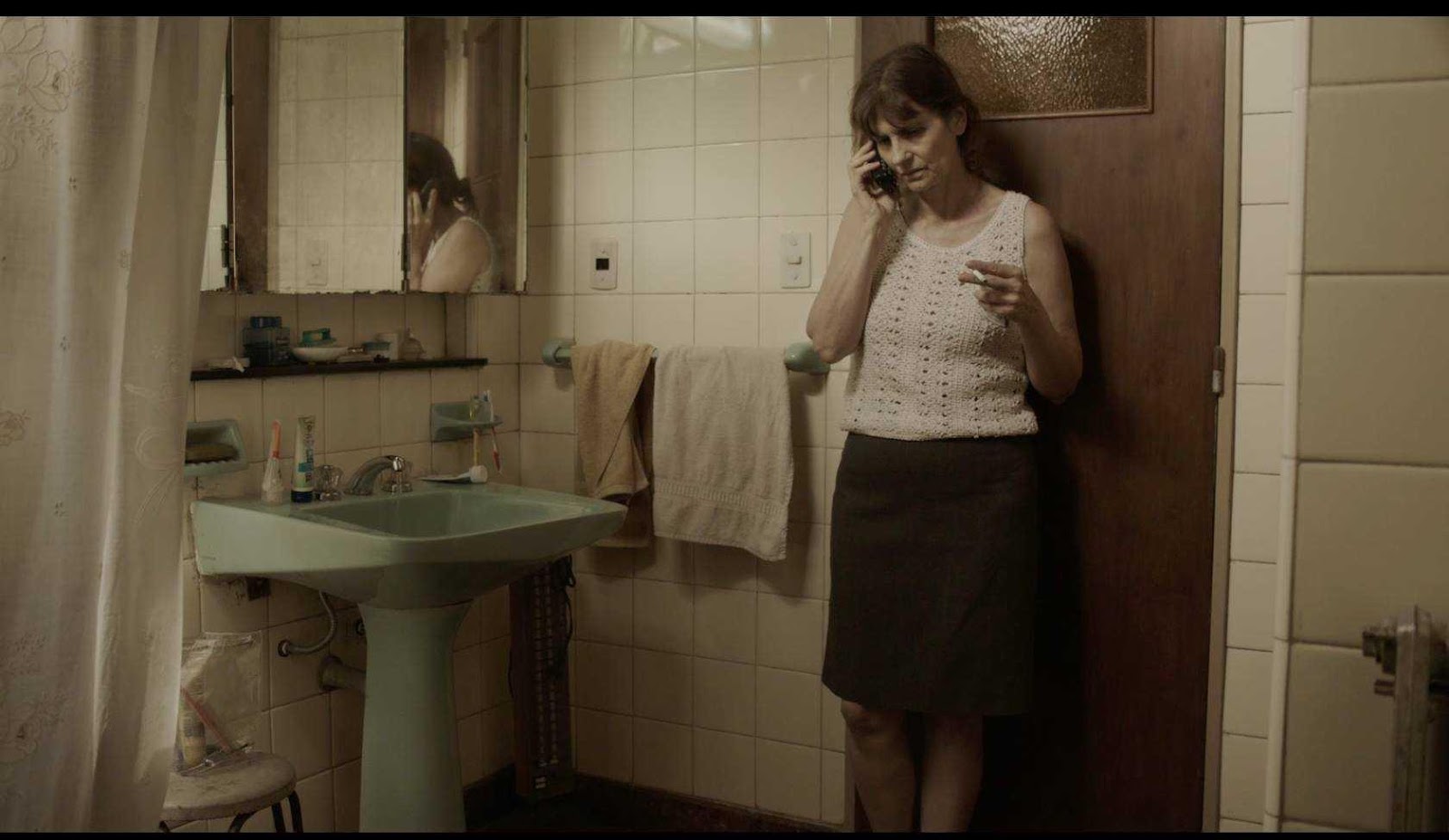 A still from ‘The Bed’

Other films in competition that drew attention were: The Bed by Argentinean filmmaker Monica Lairana, a stirring, emotional tale of love that binds a middle-aged couple despite their imminent separation as they spend their last day together in their family house; the Iranian film, Graveless on three brothers and their only sister making their troubled drive to a distant place where their dead father wished to be buried; and last but also the top festival winner, Taking the Horse to Eat Jalebis by Anmika Haksar, which is now going to the coveted Sundance Festival’s New Frontiers section, is a testament to Old Delhi through a pick pocket, vendor, labourer and activist; and Widow of Silence heading for the Rotterdam festival, by the highly inventive and original director Praveen Morchchale on a Muslim half-widow’s dilemma in Kashmir as she searches for her missing husband.

Two Malayalam films dominated the International Competition. 31-year-old Zakariya Mohammed’s award-winning debut work, Sudani from Nigeria is a celebrated film that has the distinction of scoring at the box-office. The other competitive entry, Lijo Jose Pellissery’s Ea.Ma.Yove went as far as winning two major awards at 2018 IFFK. The film is an intriguing, disturbing, ironic tale of a family deprived at every stage of finding a burial place for their dead father. 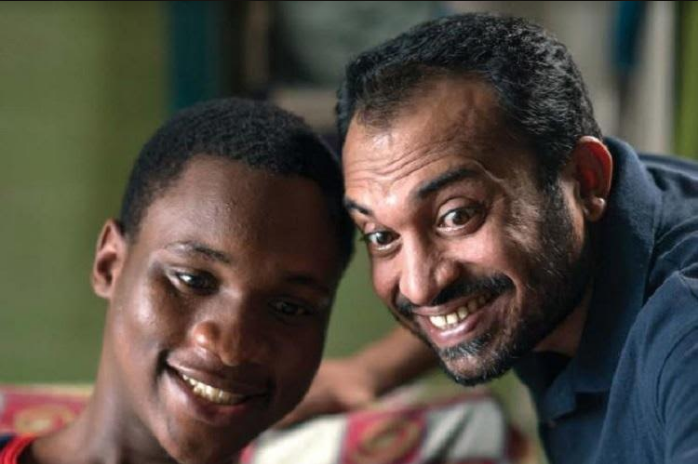 A still from ‘Sudani from Nigeria’

The 12 film New Malayalam Cinema section featured mostly young new filmmakers alongside a very few established ones, which provided insights into the content and cinematic style that drove their work. They ranged from Bilathikuzhal by Vinu AK; Eeda by B Ajithkumar; Kottayam by Binu Bhaskar; Sleeplessly Yours by Goutham Soorya and Sudeep Elamon; and Mayaanadhi by Aashiq Abu.

In the Malayalam Cinema Today package, nine of the 12 films were by new directors, most of them in their late twenties or early thirties, and made on very low budgets, borrowed money or crowd-funding.

Vinu AK’s first feature ‘Bilathikuzhal’ won rave reviews in Mumbai’s earlier MAMI and later in Goa’s IFFI. The 31-year-old from Kasaragod, present at his sixth IFFK festival, said that his hometown of Kasaragod provides a rich base for stories. Another first time director is by Vipin Radhakrishnan with his film Ave Maria.

Besides the wonderful audience of its film-driven city, IFFK spreads its cinematic ambience across the whole city of Thiruvananthapuram, with its wide spaces reverberating to the talk and sound of the many cinemas it loves.