His chuckle at such irreverence was infectious.

The last of the great Bengali triumvirate,
alongside Ritwik Ghatak and Satyajit Ray …
we can only say how grateful we are that you
blessed our times with your cinema and your presence

I have shared so much with Mrinal Sen, starting way back in the late 1960s, when he started casting for ‘Bhuvan Shome’, and asked me about the girl who modeled for Pears Soap. I was working in Lintas then and it was Alyque Padamsee who was completely charmed with the bubbly teenager, Suhasini Mulay, and made her the Pears symbol.

Mrinal-da then called me to cotact Suhasini for the role of the effervescent, unstoppable village girl in ‘Bhuvan Shome’ (1969). With her sterling performance where she managed to soften the surly forest hunter Utpal Dutt, Suhasini’s film career took off.

Mrinal-da and I kept meeting frequently every year, at film festivals (I was working at the Directorate of Film Festivals at the time), and later too, in my role as a film festival addict. He remained jocular, always gently probing all that was around him and teasing people into revealing more of their thoughts. He was also surprisingly tolerant, accepting people with their faults, tempers and attitude. But when it came to filmmakers, his judgement was sharp.

He won the Silver Bear at the 1981 Berlin International Film Festival and was happy with the picture I took of him from a distance, on stage waving to the audience in that huge auditorium. I gave him the picture and now find that I do not have a copy.

To see him with his wife Gita – the most natural of gifted actors that he so valued -- was a heartwarming delight. She was reserved, succinct and in the background, as opposed to Mrinal-da’s effusiveness, offhand impunity and openness. He loved the Bengali penchant for the “adda” – the need to meet and talk at random, where he would spur people into being candid about friends and celebrities, and make up stories just for the fun of it.

His chuckle at such irreverence was infectious. However, when Mrinal-da talked of cinema, films and politics, he was down to earth and implacable about his views. His leftist leanings were open, underlying most of his films.

Mrinal Sen made his first feature film, ‘Raat Bhore’, in 1955, when he was 32. A rapid five films later, he made ‘Bhuvan Shome’ on a shoe-string budget provided by the National Film Development Corporation, which launched him both nationally and internationally. It was also instrumental in initiating the “New Cinema” film movement in India.

Mrinal Sen was born on 14 May 1923, in Faridpur, now in Bangladesh. On finishing high school there, he came to Calcutta to study physics at the well-known Scottish Church College. He then took a postgraduate degree at the University of Calcutta. As a student, although never an active member, he was involved with the cultural wing of the Communist Party of India. He was close to the socialist Indian People’s Theatre Association. His film ‘Neel Akasher Neechey’ (Under The Blue Sky, 1959) was the first film to be banned in independent India. It explores the platonic relationship between an immigrant Chinese wage worker, Wang Lu and Basanti.

Mrinal Sen made 34 feature films as a director, 24 as a writer, and 6 as a producer. Other than Bengali, he made one film in Telugu ‘Oka Oori Katha’ (The Outsiders) and another in Oriya ‘Matira Manisha’ (Two brothers). He propelled a particularly creative era in the area of filmmaking, the 1970’s to the mid-1990’s which opened a floodgate to emerging new talents in cinema. 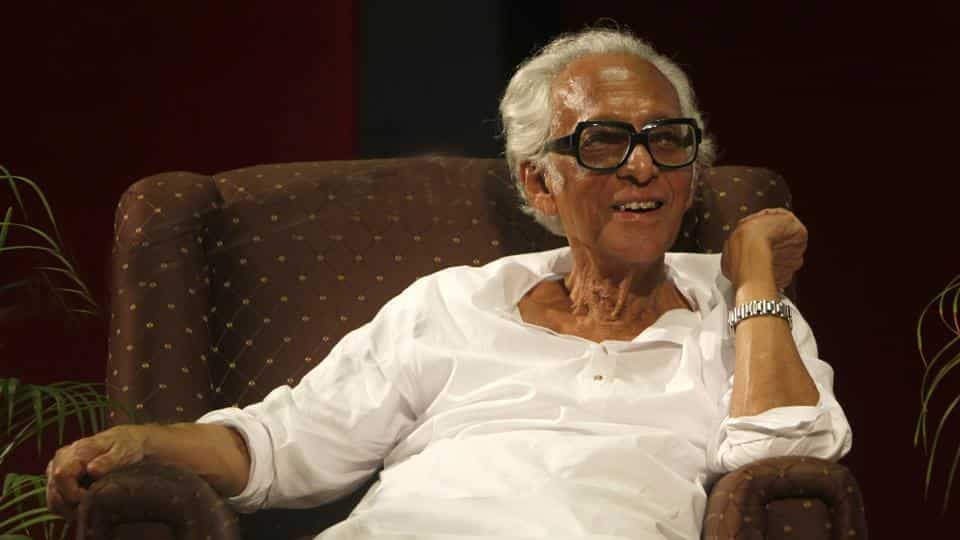