Satyajit Ray’s Heroes and Heroines , A Personal Connect With Each and All

If one were to list the number of books written on Satyajit Ray and his cinema, it would obviously demand a library labelled “Books on Satyajit Ray.”

Most of these books in Bengali and English are backed by solid research, analysis and critique. Adding to this collection is Amitava Nag’s Satyajit Ray’s Heroes and Heroines that will certainly find its rightful space in the archives of books on Ray and his films.

This not about Satyajit Ray per se. Neither is it on his films. It is an in-depth and perceptive study on the heroes and heroines of his films, analysed as the characters they portray in the films rather than as individual celluloid celebrities off-screen. The author also quotes from what the actors have to say about their engagement with Ray as a filmmaker and as a person which makes it a comprehensive, in-depth and yet, a condensed read.

The book is divided into 12 chapters each devoted to either a single actor such as Chhabi Biswas who portrayed three films directed by Ray, namely Kanchenjungha, Devi and Jalsaghar, or a single concept he worked around such as The City Heroes in which the author chooses the urban-centric heroes Ray directed such as Mahanagar, Pratidwandi, Aranyer Din Ratri, Seemabadhhya, etc. thereby, marking a dividing line between the male protagonists who belonged to the city and the others.

Chhabi Biswas, one of the most revered among veterans then, was already at his peak as one of the most admired among senior actors in Bengali cinema during its Golden Age. But he flowered differently in the deft directorial strokes Ray painted his performances with. The chapter is aptly titled Chhabi Biswas, The Aristocratic Patriarch which stands true of his performance in all the three films though the characters he essays belonged to different time-space and literary paradigms.

Satyajit Ray once remarked, “I doubt if I could ever make the film Jalsaghar without an actor of the calibre of Chhabi Babu. Probably not. Biswambhar Roy’s pride and recklessness, his passionate love for music and his obsessive love for his only son and finally the tragic downfall – only a genius like him could portray these myriad emotions.” Ray, the master of casting and actor-handling, was paying homage to Chhabi Biswas, one of the finest actors ever to have graced the Bengali silver screen.

At the end of the chapter, Nag reiterates that once an actor had realised a particular character in a Ray film, it would be impossible for any viewer to replace that actor for someone else even in his imagination. Such was the power of Ray to mutate an actor and mould him/her precisely to look, talk, behave and express himself/herself into that character.

In The City Heroes, at one place, Nag writes:

Ray had almost always been clinical in his casting. He ensured that he got the right face and right characteristics in a person for his central characters. The city heroes of the ‘70s in all the three films (Pratidwandi, Seemabaddha and Jana Aranya) are angst-ridden, robbed of the innocence. They are the other side of Apu, the iconic dreamer played to perfection by Soumitra Chatterjee.(Page 45).

Most of us may have subconsciously noticed this unique kind of casting but could not quite put our finger on it and Nag with his rare insight, has. He points out how Ray chose three different actors to represent the face of youth in the three films – Dhritiman Chatterjee in Pratidwandi, Barun Chanda in Seemabaddha and Pradip Mukherjee in Jana Aranya. Interestingly, neither Pradip Mukherjee nor Barun Chanda acted in a Ray film again.

A rare addition to the book which other books on Ray do not have is the one called Humour, The Way of Life that delves deep into Ray’s handling of humour, satire disguised as humour and humour as a political strategy within the narrative of a film quite seamlessly. Every chapter has a prologue before the author comes to the focus of his insights into the subject and this one is no exception.

This chapter begins with a quote from Charlie Chaplin. The chapter spills over with examples of scenes from different films such as the one from Samapti where the hero goes to “see” a girl in the heavy rains and his carefully constructed image with the watch and shoes which generates spontaneous laughter among the audience but never appears pretentious.

Nag then goes on to focus on Rabi Ghosh, Santosh Dutta and Tulsi Chakraborty which appropriately carries how powerful an impact he made on these actors who were almost also-rans in mainstream Bengali cinema till Ray chanced upon them.

Soumitra Chatterjee, The Blue-Eyed Boy begins with the premiere of Chatterjee’s debut film Apur Sansar, the last of the Apu Trilogy that made him a star overnight, taking him by surprise. Then, the author goes on to describe the evolution of the actor through his journey in the Ray films he acted in, growing from strength to strength, from one distinct character to the next, yet not subscribing to the romantic hero his looks and persona demanded.

He acted in 14 of the 27 films directed by Ray in a range of characters it would be difficult for any actor across the world to equal. From the dreamer Apu in his first film through the rough-and-tough non-Bengali taxi driver who surprises himself by rescuing the about-to-be-trafficked Gulabi through the Brahmin priest who tries to take advantage of the man-made famine but ultimately surrenders to his conscience reminding him of his hungry wife back home right till the Feluda character, Chatterjee excelled himself even while working in mainstream films alongside.

It is unusual for a book titled Ray’s Heroes and Heroines including a chapter on Villains but at the same time, it adds a completely different dimension to the book. The revelations are interesting because they do seem to fit into the scheme of the chapter. Nag offers the example of Jahar Roy’s character as he cruel Prime Minister in the kingdom of Halla in Goopy Gyne Bagha Byne which stands out as an against-the-grain casting for one of the most celebrated of comedians in Bengali cinema at a time when he was out of work. Like Tulsi Chakraborty in Parash Pathar, Jahar Roy revealed his versatility in the film. Most of Ray’s humour is often tinged with biting satire as the author points out.

One entire chapter is committed to elaborating on the milestone link between Uttam Kumar and Satyajit Ray, the former, already an established and most successful star in Bengali cinema and the latter, having reached international acclaim. The chemistry the two created in two films Nayak and Chiriakhana fetched for the star the coveted Bharat Award for Best Actor at the National Awards.

Nayak remains an immortal film among Ray’s filmography especially because it did not feature Soumitra Chatterjee and presented Uttam Kumar in a role he could identify with and yet prove his versatility as an actor. It was shot inside stationery, make-believe train thanks to the brilliant art direction by Dulal Dutta and that contributed to the dynamic backdrop of the narrative.

One wonders whether The Mother Archetype would fit into the labelling of “Heroes and Heroines” but as one reads further, the focus on Karuna Banerejee and on Chunibala Devi underscores that though these actresses might not exactly be labelled “heroine” the way the word is understood, they did define the “heroine” albeit, in a different way, in the Ray films they acted in.

Banerjee, a post-graduate in English literature, was transformed entirely and went under the skin of Sarbajaya in the first two parts of the Apu Trilogy, had a near-silent but strong role in Devi and a neglected wife of an arrogant old man in Kanchenjungha. Chunibala Devi who reportedly passed away before Pather Panchali was released, we are informed won the Best Actress Award at the Manila Film Festival.

Two separate chapters dwell exclusively on Madhbabi Mukherjee and Sharmila Tagore which they rightly deserve when you place their entire career-map against their work in Ray’s films. Madhabi had made her debut as a teenager long before she met Ray but for Tagore, it was a remarkable debut when she was just 13 or 14 and once confessed that she would fall asleep between shots when the lights were being changed.

The two actresses are as different as chalk and cheese and so have separate chapters allotted to them. The quotes from the actresses offer little known insights into Ray as a man and Ray as a director who, Madhabi says at one point, never attacked their self-confidence and if he did not like a particular take, he would say – okay but let us take another one.

The Children’s World of Satyajit Ray goes to show how children and Ray were inseparable. Pather Panchali had kids. Devi and Kanchenjungha had kids too, but essaying minor roles. What magic did Ray play with the kids that made them so much like themselves and not like the precocious kids we were used to in mainstream films?

"His gift lay in that that he never treated us like children. I would play chess with him between shoots and I would win every time. Maybe, he allowed me to win. I would be surprised to find my father in constant awe of him. This treatment of placing children on an equal platform helped us open up. All we had to do was to act ourselves to be natural. In the given ambience, as far as I can remember, I don't think it was difficult. Come to think of it, it was quite easy. Really," says Kushal Chakraborty who debuted in Sonar Kella and went on to become a much sought-after actor on Bengali television.

He admitted that he had m ade GGBB for his son Sandip, then a child who had asked him why he did not make films for children. But GGBB is not just for children and goes far beyond to reach out to an adult audience with the politics underwritten beneath the fantasy of a fairy tale that ends happily ever after.

The Significant Others describe actors and actresses who shone in Ray’s films so brilliantly that their performance is carved in the annals of time. Some of them like Pahari Sanyal and Shabana Azmi and Kali Banerjee, Lily Chakraborty were already established in the film industry. Some others like Victor Banerjee, Tom Alter, Smita Patil, Dipankar Dey, Mamata Shankar were still finding their feet in troubled waters. But their work in Ray’s films takes their portfolio to a different plane altogether.

One negative point this critic would like to point out is the frequent reference to Andrew Robinson’s comments on Ray. Nag’s individual take stands quite well and complete on its own and does not need the support of any foreign critic without trying to slight the great critic. The positive point is that Nag steers clear away from any kind of theory which makes the book very reader-friendly and universal. His language and style define his command over taking the reader’s intelligence and vocabulary into consideration.

The production values of the book are excellent to say the least and Pinaki De’s cover design stands out as they usually do. The font used is quite reader-friendly and the lay-out of the photographs are apt though they come in a bunch and rarely as individual images. 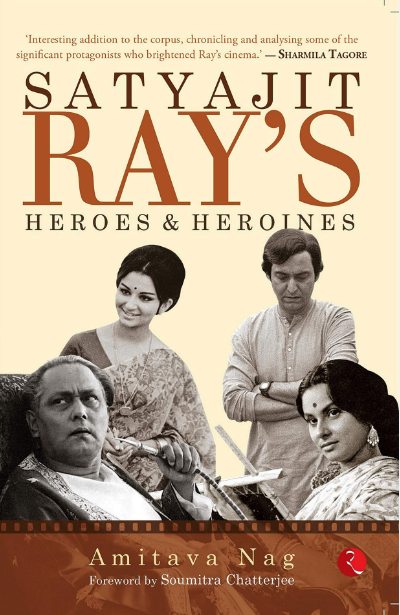