The name of the play is Bhalo Lok meaning “The Good Man.”

The play has been adapted in Bengali from Luigi Pirandello’s original Tuto Per Bene (All For The Best) which was penned in 1920 and was translated from Italian into English by Henry Reed. Bhalo Lok has been completely infused with the Bengali ambience, look and mounting including the language and the characterisation. Pirandello won the Nobel Prize for Literature in 1934 for "his almost magical power to turn psychological analysis into good theatre."

Chandan Sen has made minor changes in the original which changes the texture and presentation of the performance in a certain way.

The play revolves round two men who have been close friends since childhood drifting apart as they grow up because of the distinct difference in ideology. The two are disciples of a saintly man, Nityananda Roy Chowdhury who marries his daughter Kamalika to Satyacharan.

The two have a daughter, Kalpa. One fine day, Kamalika disappears and to save Satyacharan, facing financial penury and mental depression from the heavy responsibility of taking care of Kalpa, Dhurjotinarayan, now an affluent and powerful political leader who never married, takes her away to the city and brings her up, educates her and loves her like he would, his own daughter. Satyacharan lives alone under the care and respect of Prabha who has been with the family for years and is privy to every family secret which her loyalty keeps her from sharing with anyone.

In the village intriguingly called “Majher Char” which means, “the island in the middle” Satyacharan is dedicated to the welfare of one and all and the people worship him as if he is their God. But he is a very lonely man and wishes that his daughter Kalpa came back to him. But Kalpa is unwilling because she is bitter about a father who let her go and besides, she hardly knows this man. Dhurjatinarayan too, is unwilling to let go. But as Kalpa gets closer to Satyacharan, she warms up to him and wishes to stay for a while Dhurjotinarayan who feels quite jealous of Satyacharan’s fame, leaves reluctantly. 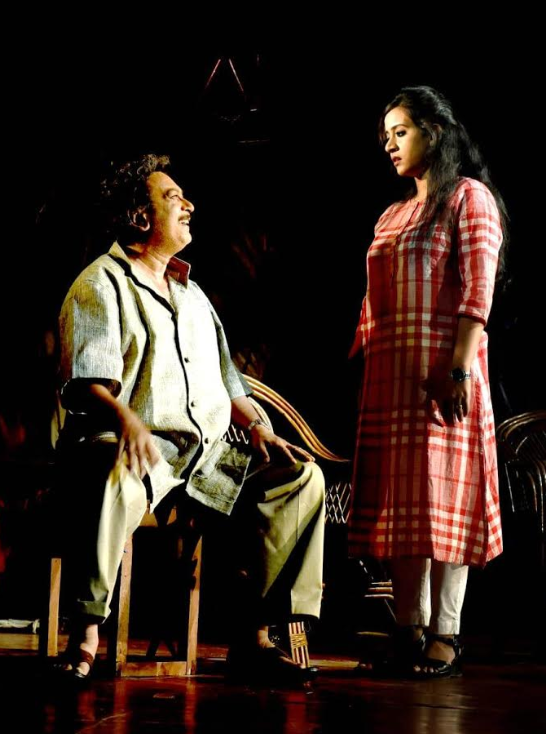 Bhalo Lok, like most of Pirandello’s plays and novels, is entirely character-centric and the plot plays subservient to the characters. The question that remains is – who, really, is Kalpa’s father? A secret letter left behind by Kamalini’s father Nityananda which suddenly comes out in the open raises questions about the true paternity of Kalpa. Is she Satyacharan’s biological daughter and brought up by Dhurjotinarayan? Or is she Rudranarayan’s biological offspring of which Satyacharan was unaware till now?

Who, then, is the “good man” here? Is it Satyacharan who lives by his commitment to his mentor to lead a life of selfless service to the people a life of honesty and ethics? Or, is it really Dhurjotinarayan who took away Kalpa to be brought up well and live within a comfort Satyacharan could not afford? Though the climax makes it clear who the real father is, placed today in 2019 when values have evolved since 1920, the audience is left wondering who the “good man” really is.

There are cameo characters who flit in and out of the performance space to fill in some of the blanks in the story and this adds rhythm to the narrative which is a bit too sad. Pirandello is always preoccupied with the problem of identity and this play is no exception because Kalpa’s very existence is filled with questions of identity while the two friends who are no longer friends are still confused about the authenticity of their fatherhood on the one hand and their ideological differences on the other.

The music is low key, the length is a bit too long and the performances are good specially with reference to Runa Mukhopadhyay as Prabha, Asis Ghosh as Rudranarayan and Kathakoli as Kalpa. Meghnad keeps control so that the play does not go overboard as director of the play. But his essaying of the character of Satyacharan who is present from the beginning of the play till the end, is somewhat over-the-top.

Chandan Sen must be commended for bringing in the changes in the original to fit into the cultural ambience of West Bengal and the technical values –light, sound and make-up also deserve accolades. Pirandello did not believe in happy endings but in keeping his readers intrigued about which way the characters will sway and remaining intrigued till the final twist.

Bhalo Lok is certainly a worthy watch with the sole problem of an overdose of theatrics. A little toning down of the dramatics would make it subtler and low-key which the story demands.

Tour of Duty: Not a Good Idea 21 hours ago

DU Economics Results Out, Many Marked Absent or Failed 22 hours ago

The New Crisis Lurking Behind Lockdown Relaxation 22 hours ago

A Confession of Corrections to Guru Dutt

“The Searchers, the Silent Music Maker, the Followers of Dreams..“