Students say the administration hired 'bouncers' to attack them

NEW DELHI: Over a thousand students are gathered around the Vice-Chancellor’s office at Jamia Millia Islamia. A Palestine flag waves from the roof. Students are chanting “Go Back Proctor!” on a campus that hasn’t had a students’ union for the past fourteen years.

A student protest against their university’s organising a Global Health Confluence with Israel as “country partner” has gathered momentum and new demands.

On October 14 students started a dharna (sit-in) demanding that the Jamia administration withdraw the “show cause notices” it had served to students for protesting against the Israeli government.

Met with no response, student groups took out a march yesterday to the VC’s office demanding to be heard. Protesters claim that while they were marching they were attacked by “bouncers” hired by the administration. 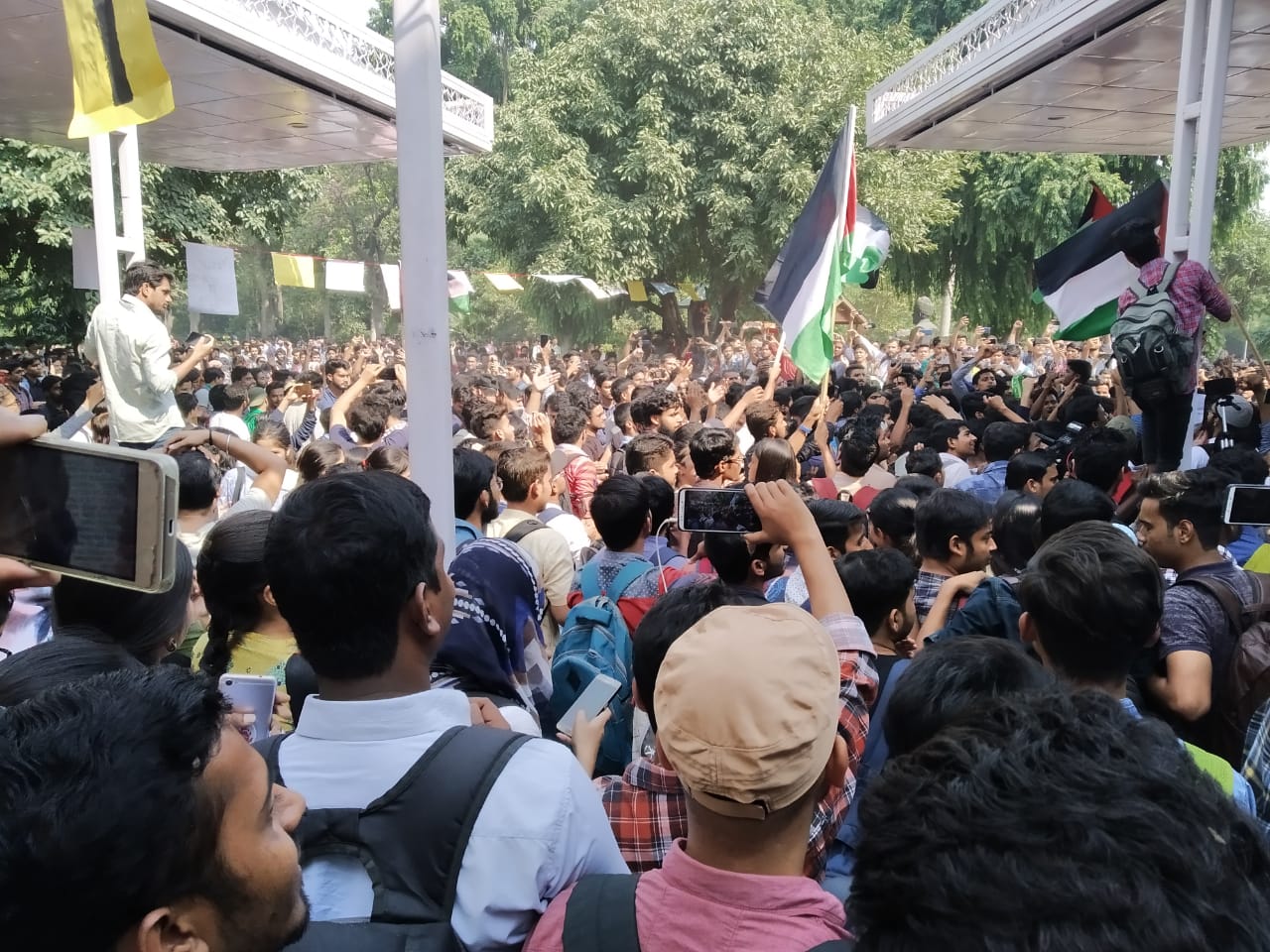 Ragini, a member of the feminist collective Pinjra Tod, told The Citizen “We were silently taking out a march to the VC’s office along with almost 700 students when we were attacked. Boys claiming to be university students started beating us up with leather belts. Many women were roughed up and molested by these boys.”

Students say that many of those assaulted were admitted to the Holy Family Hospital adjoining the university. They shared videos of two groups of youths wearing backpacks and whipping each other with belts, with guards trying to separate them.

The administration, however, denies these charges and claims it had nothing to do with the scuffle. “Today a group of students backed by some student organisations gheraoed the vice-chancellor’s office, besieged the office complex and blocked all exit gates,” said university public relations officer Ahmed Azeem. 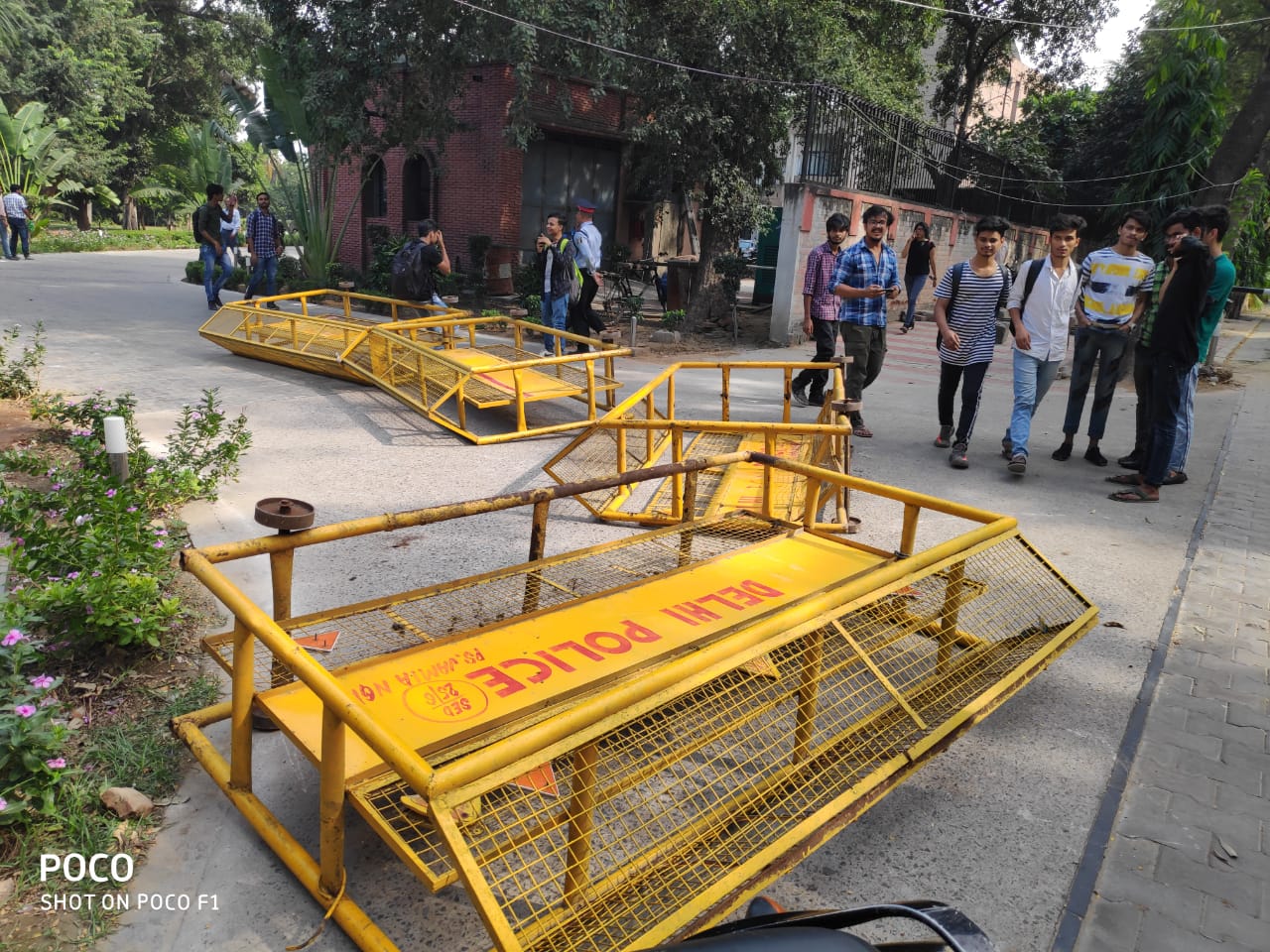 “A group of senior teachers and officials of the university met the agitating students and requested them to lift their siege of the administrative complex. The students were also assured all their demands would be heard by the highest decision-making body of the university, but the protesting students refused to talk.

“A number of delegates attending a conference on Mahatma Gandhi at the English department were not allowed to move out of the administrative complex. When English students tried to help the delegates take out their vehicles, protesting students stopped them and a scuffle broke out between the two groups. The protesting students also damaged vehicles parked in the complex,” he added.

Meanwhile the Delhi Police along with riot control forces surrounded the university last night. When students objected to their presence on campus, they were told the police had written permission from the administration to enter.

Student and political groups along with some leaders have extended support to the protesting students. The SFI and AISA affiliated with the communist parties, Pinjra Tod, and the SIO affiliated with the Jamaat-e Islami condemned the attack on students and demanded swift redressal.

A number of political leaders and MPs have also come out to support the agitating students.

Manoj Jha, Rajya Sabha MP from the RJD tweeted, “A peaceful protest by aggrieved students outside VC office is responded to by the Jamia administration in such a brutal manner… Let’s not forget the ethos which inspired the foundation of #JamiaMilliaIslamia… Dayar-i Shauq mera.”

T.N.Prathapan, Congress MP from Thrissur, has joined the students on campus.

With the demonstration is gaining strength and students having successfully organised a strike across the university, their demands have also seen a change.

They want the disciplinary committee dissolved against five students protesting the Israel linked event, the Chief Proctor suspended, fresh elections held to the students’ union, and police action against the “bouncers” who attacked them yesterday.

Asif Iqbal a protestor told The Citizen, “Our demands today have expanded. Now we not only want the disciplinary committee to be dissolved but also a students’ union to be there, the proctor to go, and the vice-chancellor Najma Akhtar to immediately come and address the students.”