Last Week in Protest: Small Towns Miss the Headlines But Not the Crowds

While protests against the Citizenship (Amendment) Act (CAA) and National Register of Citizens (NRC) in metropolitan cities of Delhi, Mumbai and Bangalore have been making headlines and capturing popular imagination, large demonstrations in smaller towns have gone unreported.

The rally was reportedly organised by Dastoor Bachao Committee and Janata Dal (Secular) corporator Shan-e-Hind, daughter of MLA Nihal Ahmed of Malegaon. Towards the end of the rally, which began from Jamiat-us Swahelat ending at Shahidon Ki Yadgaar, Qedwai Road, Shan-e-Hind reportedly called for a “non cooperation movement” on Republic Day. 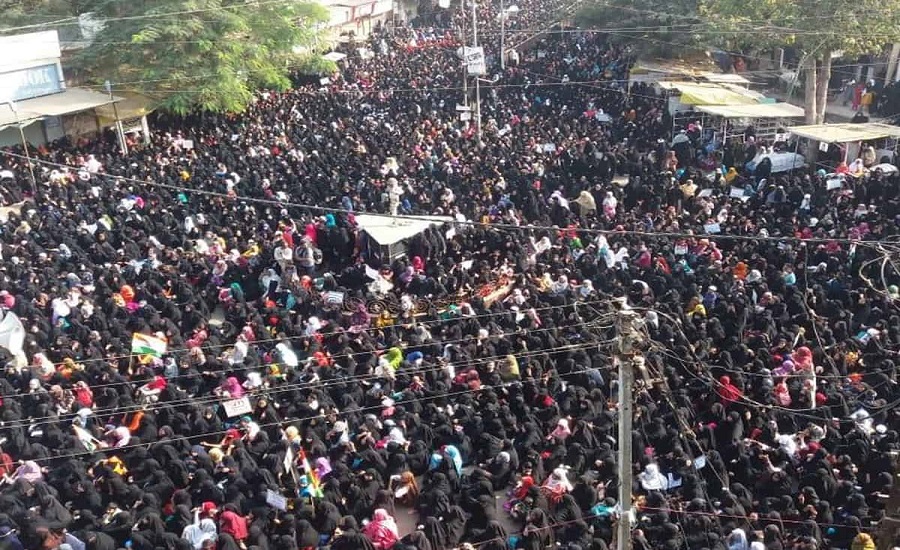 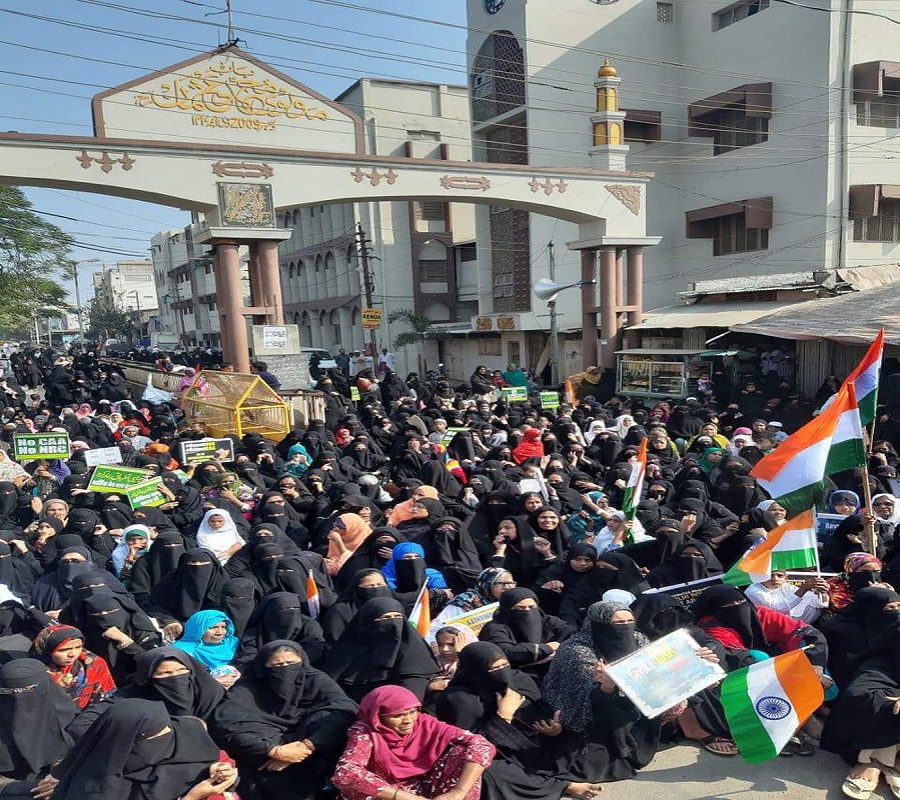 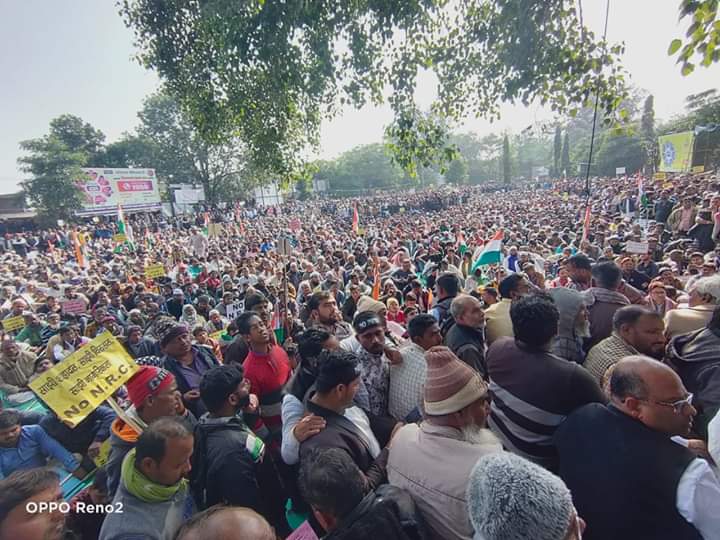 On Wednesday, 3000 unidentified protesters and seven identified persons were charged with sedition by the Dhanbad police for protesting against CAA in Jharkhand. The FIR was reportedly filed on the basis of a complaint by Dhanbad Circle Officer Prashant Kumar Laiq against protesters allegedly blocking roads and shouting inflammatory slogans hurting religious sentiments.

Out of an estimated gathering of 4000 protesters, the 3000 unidentified and seven identified persons were charged under various sections of the Indian Penal Code (IPC) for unlawful assembly, obstructing a public servant, public nuisance, endangering the lives of other persons, attempts to create hatred or ill-will between different religious groups and sedition.

On Thursday, all charges were reportedly dropped and the Chief Minister Hemant Soren gave instructions to take disciplinary action against the concerned officials.

Regular protests have been taking place in Ranchi as well. A massive protest took place in the state capital on January 6 where protesters condemned the violence on JNU students while rejecting CAA and NRC. The Preamble was read out by protesting students, which was reportedly met with pro-CAA chants by another group. The protesters however, continued to voice their dissatisfaction with the current government's efforts to curb peaceful dissent and freedom of expression. 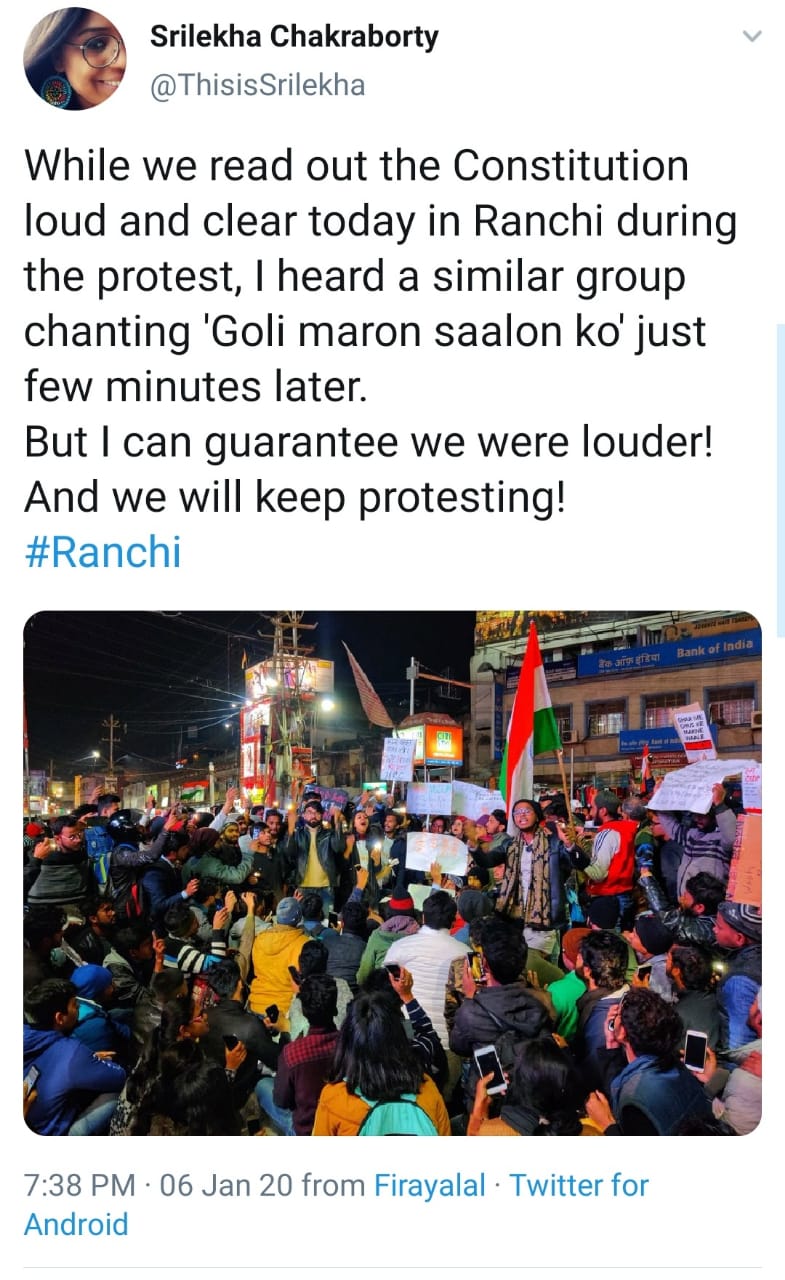 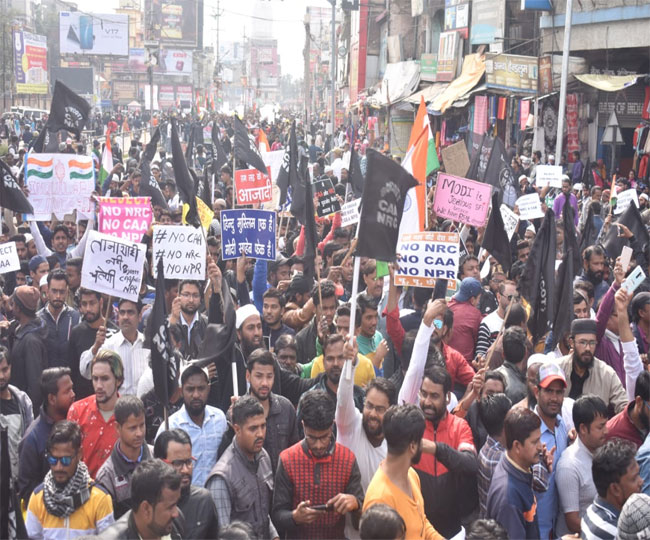 Yesterday, citizens gathered at Sainik Market, Ranchi and read out the Preamble of the Constitution in protest against the citizenship law.

A citizen’s march from Albert Ekka Chowk to Raj Bhawan in Ranchi was organised on Wednesday which saw a massive outpouring of protesters on the streets against CAA and violence against students of AMU, JNU and Jamia Millia University. Shops remained closed that day in the capital as a sign of protest.

In Raipur, Chhattisgarh, people have been demonstrating in solidarity with JNU students and against the CAA and NRC since January 5. On Tuesday, 400 students of CM Dubey Postgraduate College, Bilaspur, Chhattisgarh reportedly built a human chain, surrounding the college from all sides, as a sign of protest against the recent violence in JNU. They urged that the perpetrators of the violence be brought to justice. 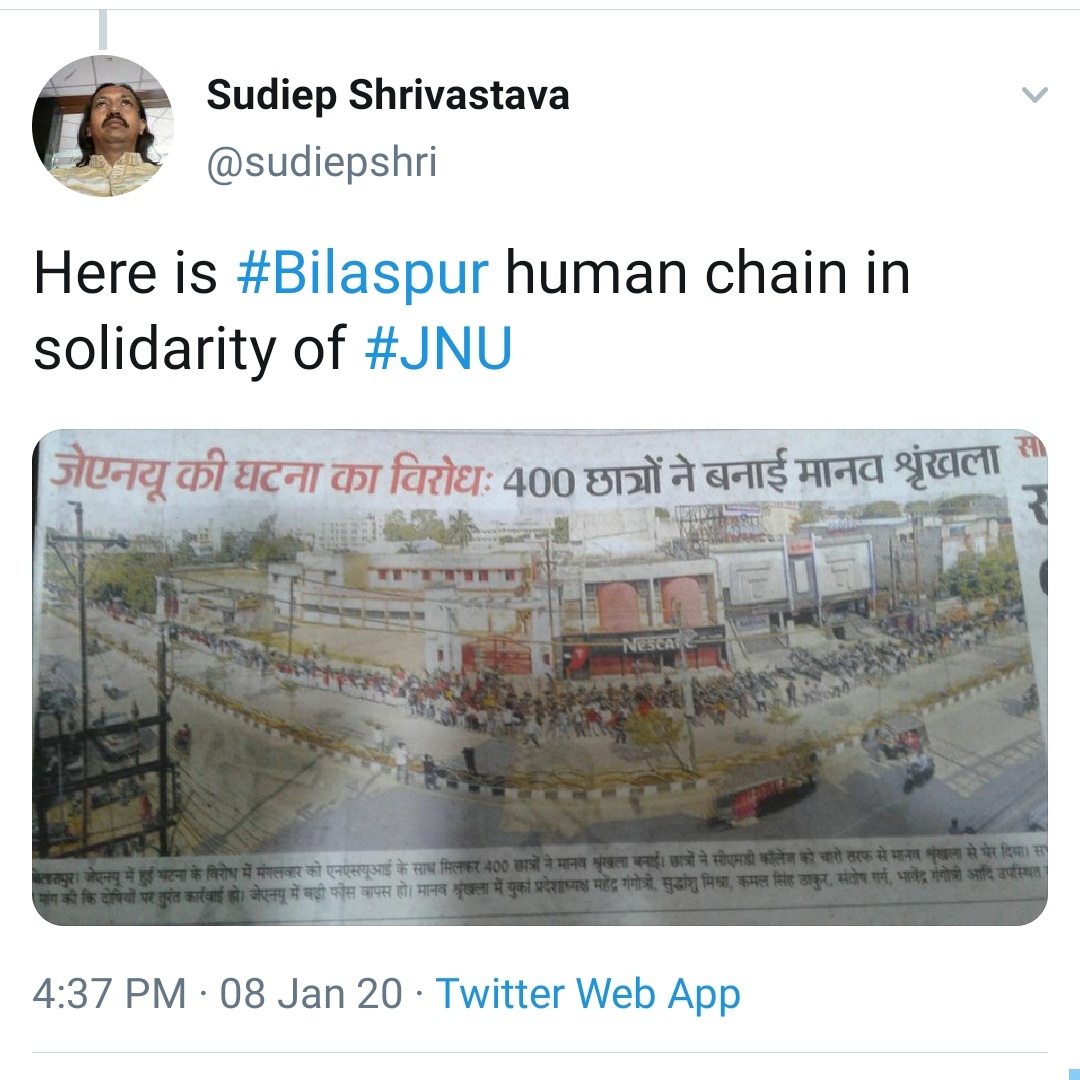 The visit was cancelled after the BJP-led state government in Assam suggested the same to the Prime Minister’s Office (PMO) in the wake of ongoing anti-CAA/NRC demonstrations. All Assam Students’ Union (AASU) warned that PM Modi’s visit to the state would be met with massive protests. At a large meeting in Jonai, Dhemaji district, Asom Jatiyatabadi Yuva Chatra Parishad (AJYCP) urged the crowd to raise “Khelo India, Bhago Modi” chants if PM Modi visits.

The people of Dhemaji further took to the streets on Thursday to protest against CAA NRC and NPR in response to the pro-CAA rally organised by Himanta Biswa Sarma on Wednesday.

Thousands of protesters, joined by the artist’s fraternity, participated in a protest rally against CAA at Lahowal, Dibrugarh district. Gathering at Muttock tea estate playground, the protesters, through songs, poetry and sloganeering, demanded that the CAA be scrapped. 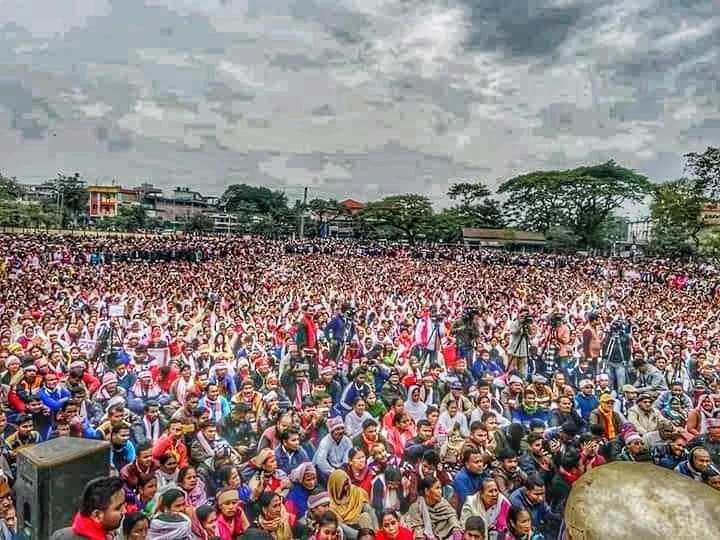 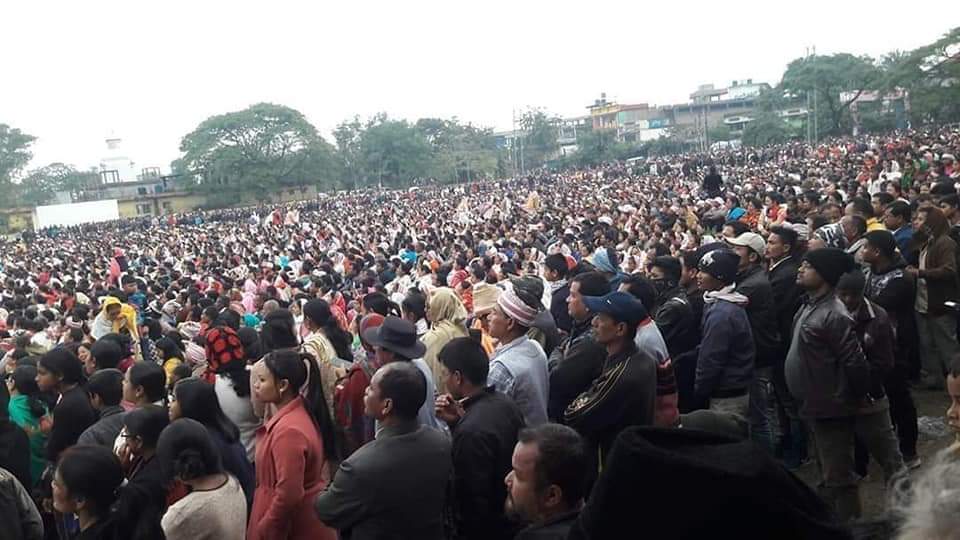 A black flag was reportedly raised at the main entrance of Dibrugarh University, as called for by AASU and North East Students’ Organisation (NESO) as a sign of protest against “the barbarism upon JNU students”. 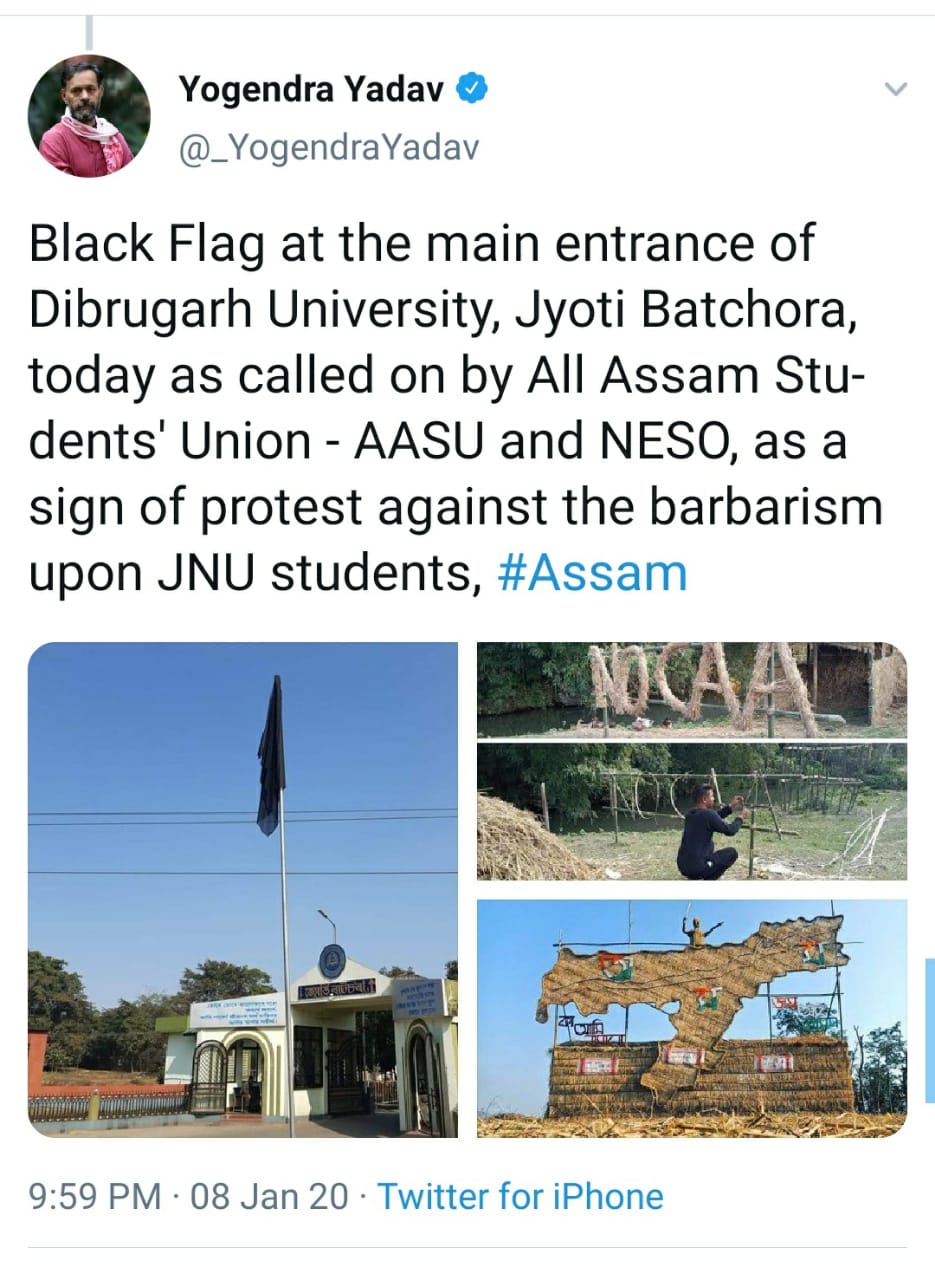 Men and women in Gaya, Bihar have been conducting a sit-in protest for days. According to tweets, the demonstration was addressed by former IPS officer-turned-politician Nikhil Kumar who has also served as the Governor of Kerala. Speaking against the police brutality in Delhi, he is reported to have said, “I used to be proud of having served Delhi Police but now I'm ashamed to see their brutal crackdown on peacefully protesting students.” 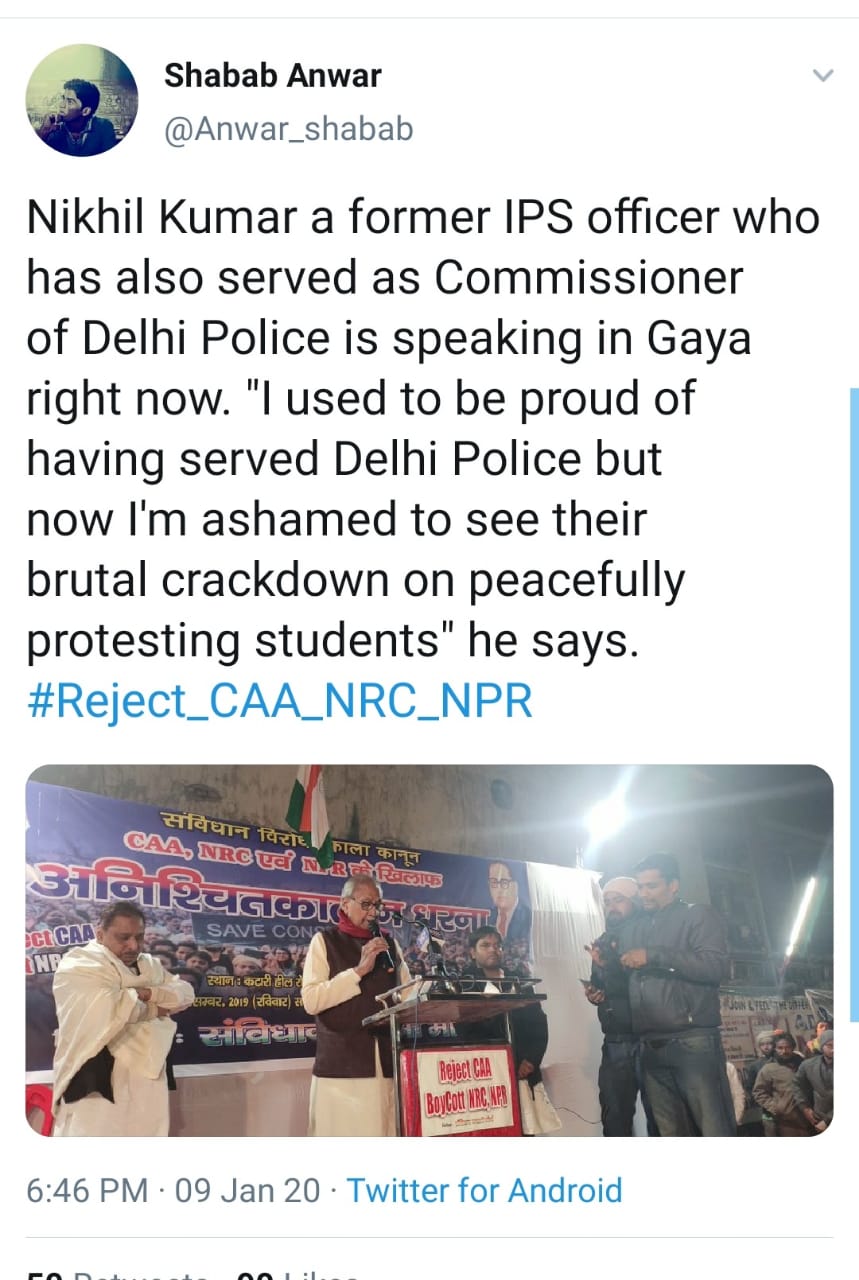 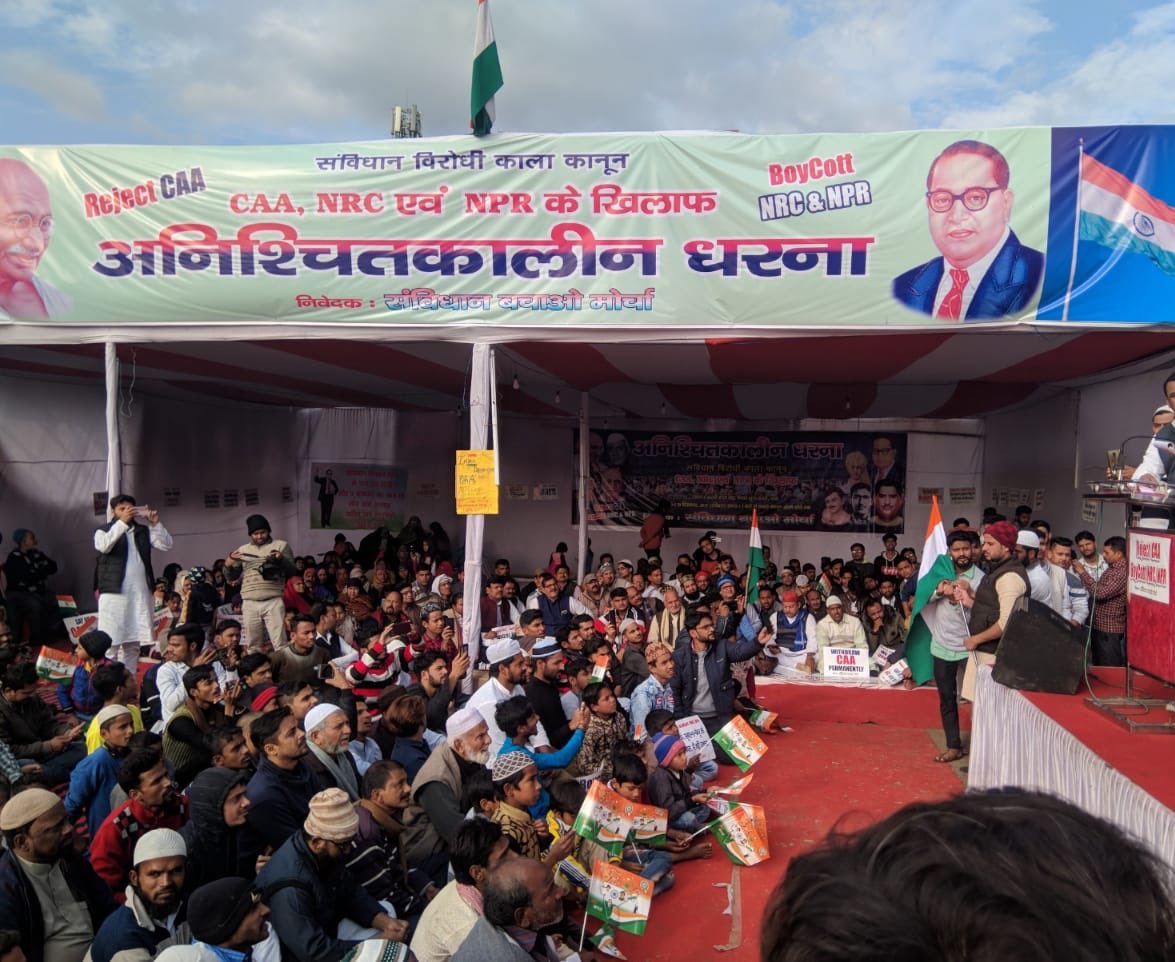 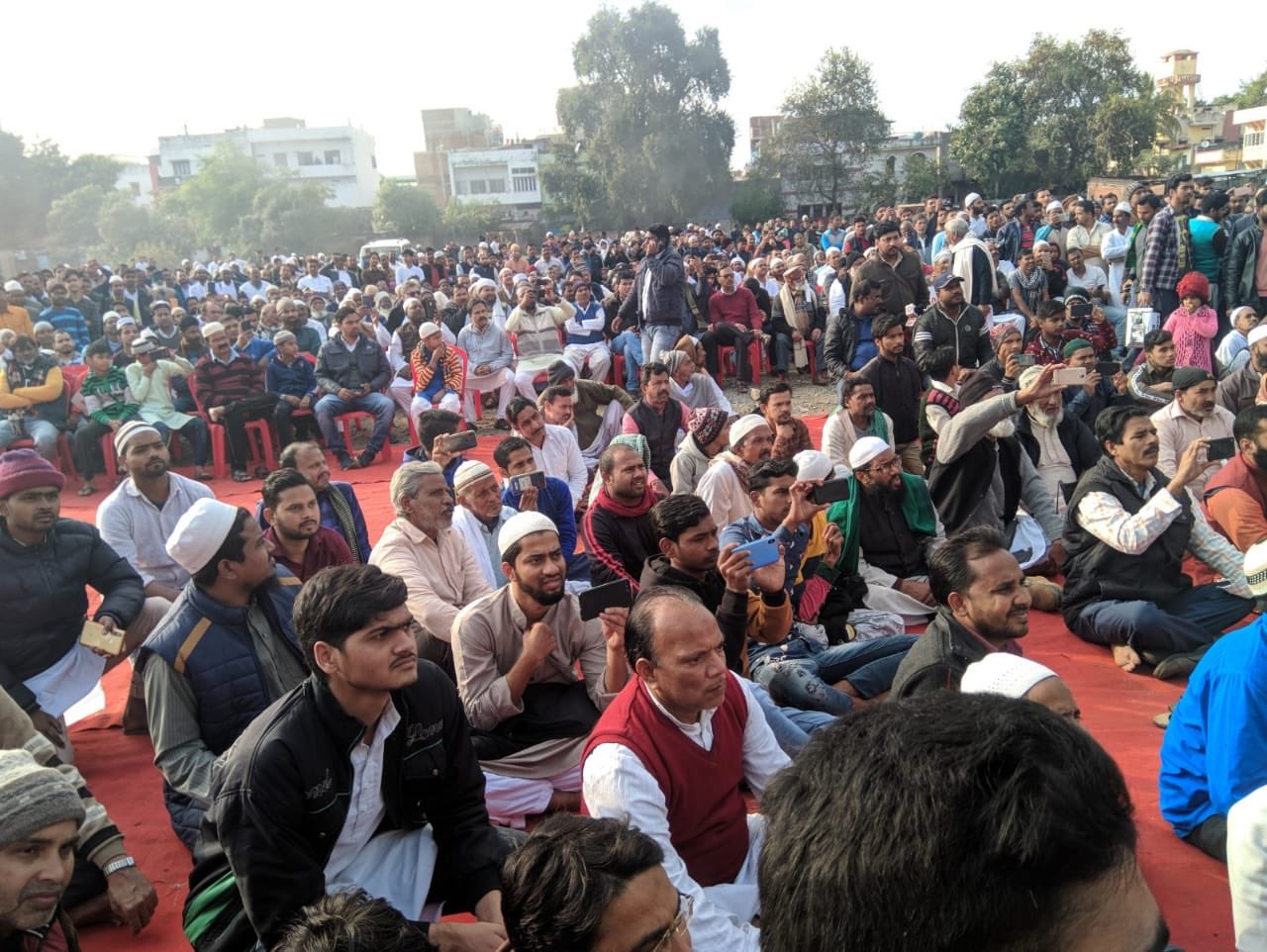 On January 3, Malerkotla, a Muslim-majority town in Punjab saw a massive response to the call to protest by a number of organisations under the collective banner of Haa Da Naara Sangharsh Morcha. Shops were shut as a sign of protest and black flags were seen above houses and commercial establishments in order to mark the date as a “black day”.

Locals, including not only Muslims but Sikhs and Hindus too, came out in large numbers. The demonstration was addressed by former JNU student Umar Khalid. Khalid urged the people to peacefully raise their voice against the CAA and NRC to counter the “divisive game of the Central Government.” 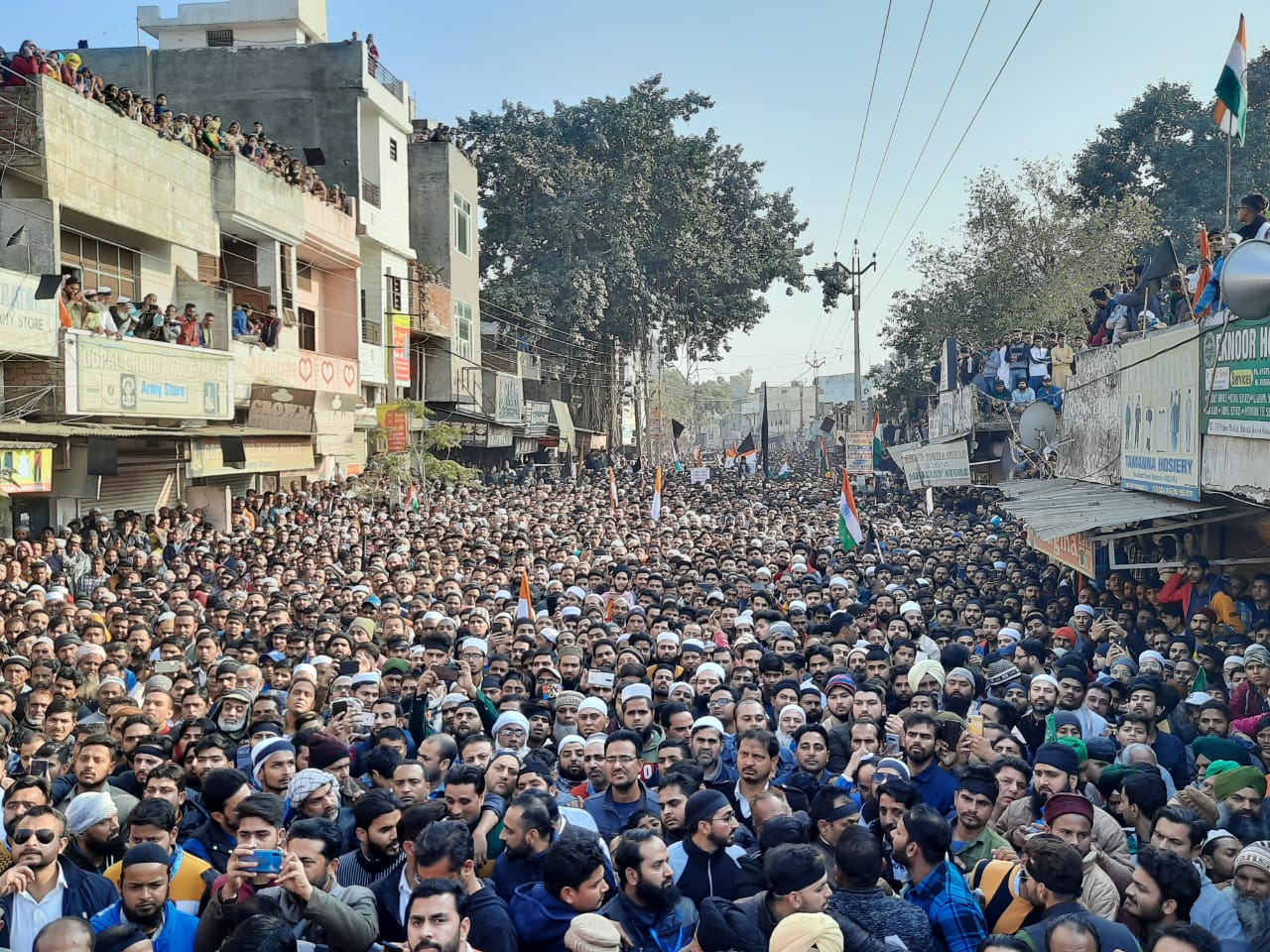 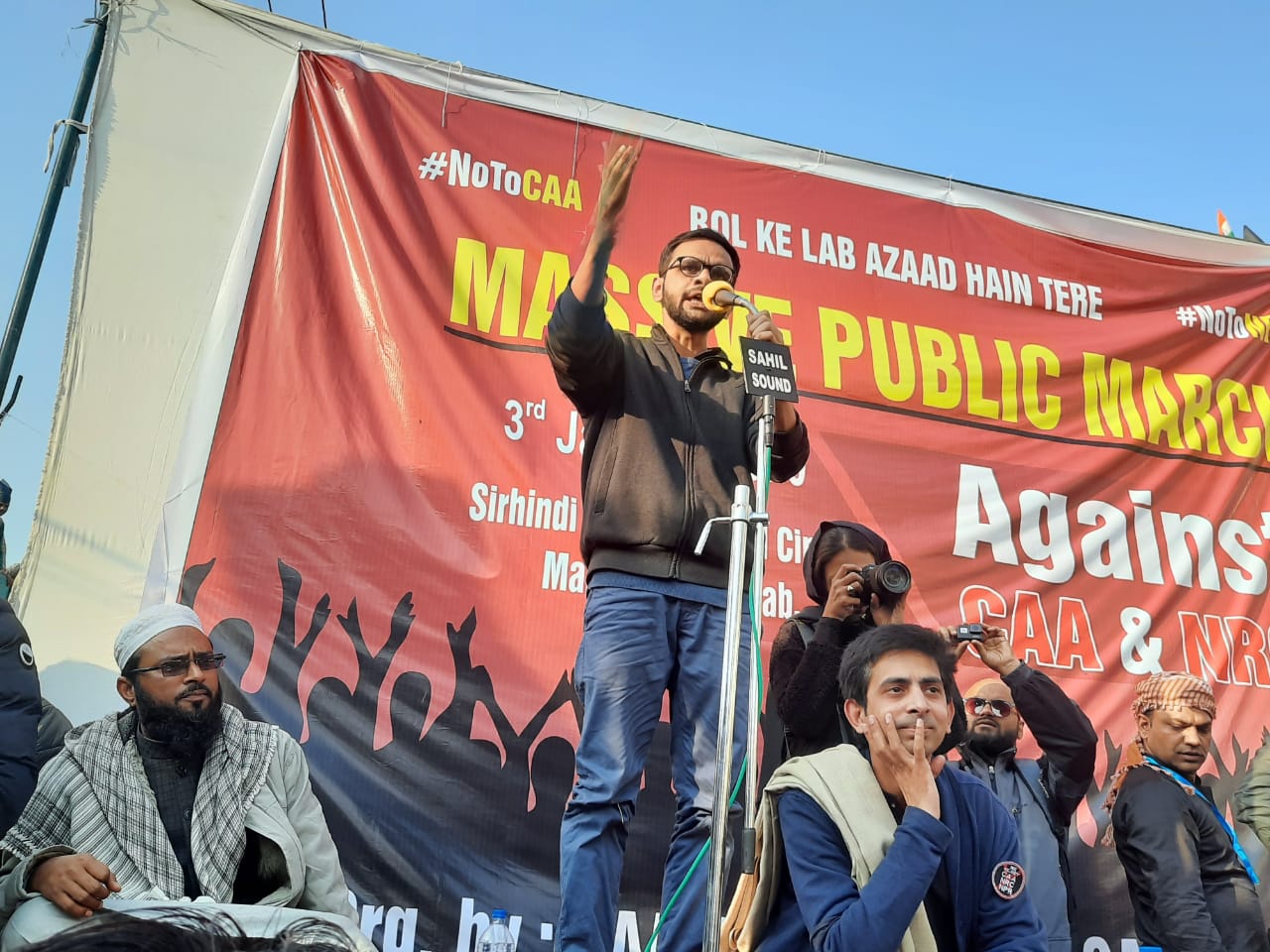 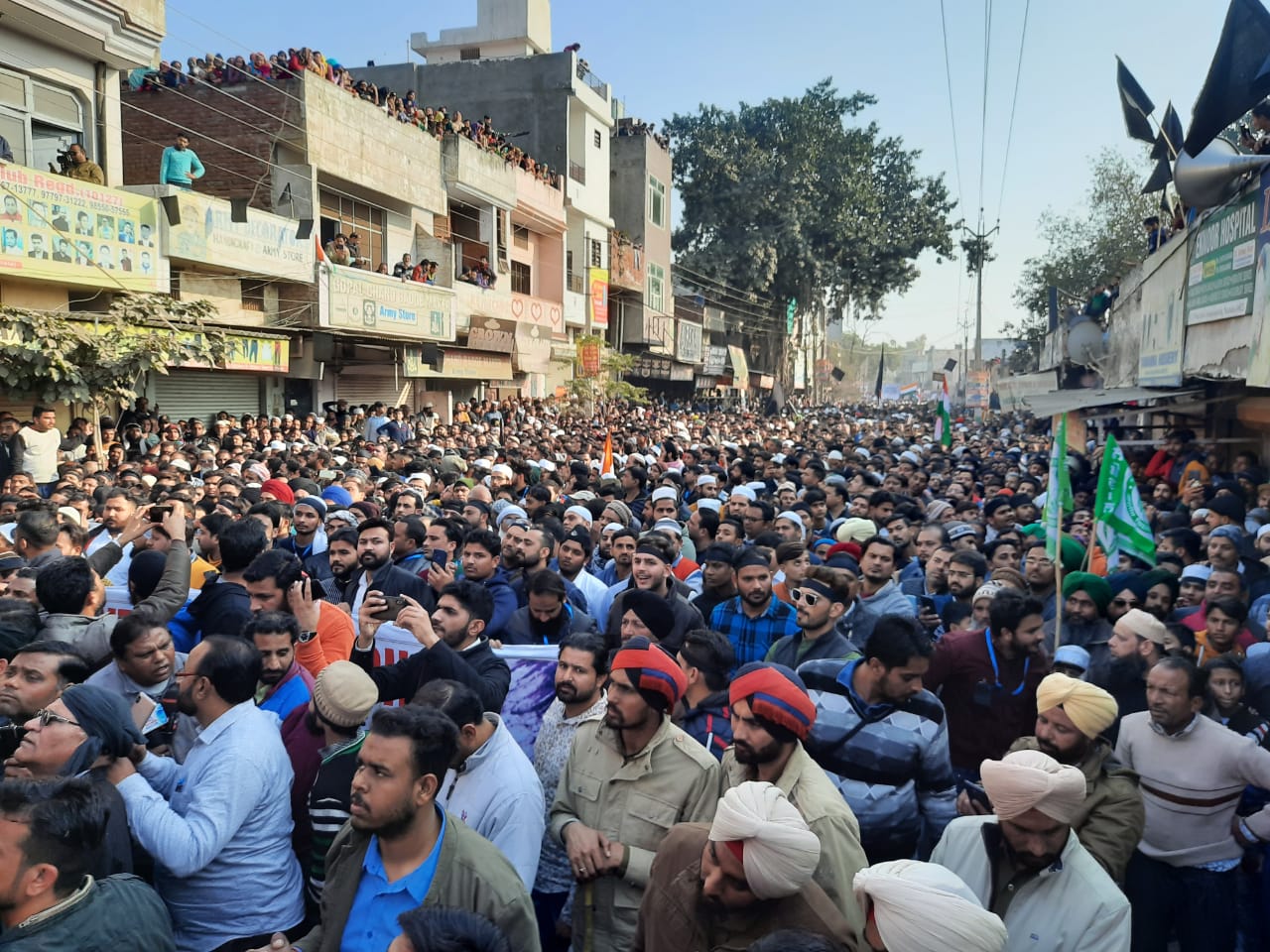 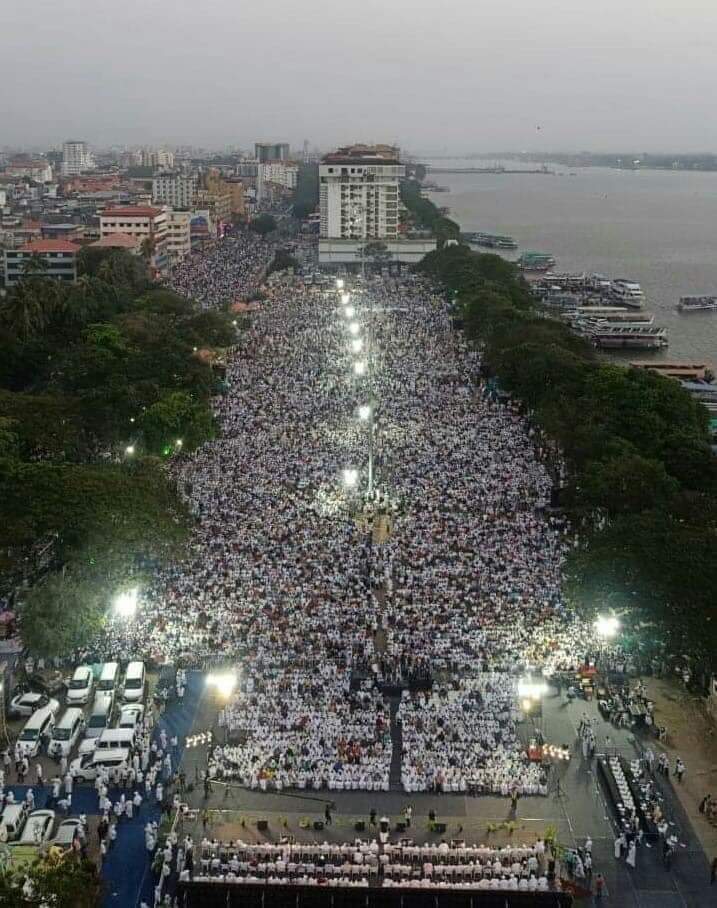 Protests continue to rage across the country daily, from big cities to small districts with people coming out in hordes to raise their voice against the contentious citizenship Act, NRC and NPR.