NEW DELHI: As campaigning ahead of the February 8 polls in Delhi took an increasingly communal turn with the Shaheen Bagh protests, Pakistan and even biryani taking centre stage in the BJP’s rallies and speeches - it seems to have had little impact on the ground.

It’s the last day of campaigning and we are in East Delhi’s Trilokpuri. “Be careful and aware; don’t forget that this is Trilokpuri,” a resident warns. Trilokpuri is what reporters describe as a ‘sensitive’ area - with a history of communal tension. In 1984, it witnessed large scale anti-Sikh violence. In 2014, a fight near a makeshift temple snowballed into riots - injuring over 50 people and prompting a week-long curfew. In 2019, ahead of the general elections, two mutilated cow carcasses sparked tensions.

But the warning seems misplaced this Thursday afternoon - with residents milling about in the warm winter sun, offering us tea and biscuits. Party flags and banners cover the streets, and every few minutes, an election rally passes by - blaring very (we must admit-) catchy campaign music.

A group of young men - late teens and early twenties - are engrossed in animated conversation, barely glancing at the election rally across the road. We hesitatingly interrupt. “I think jhadoo (Aam Aadmi Party) has the edge, but don’t ask him - he’s a bhakt,” laughs Mohammad Farman - pointing at friend Prakash. “I like Modi,” Prakash admits. “Yes, Kejriwal has given things for free - but where’s the guarantee he won’t take it all back?” The boys laugh - unwittingly betraying a lack of trust for political promises. They are referring to electricity and water subsidies offered by the Aam Aadmi Party - key deliverables that helped the party secure 67 of 70 seats in 2015.

“For me, it’s not even about the freebies,” Farman says. “I’m a student at an engineering college, and I’ve seen a massive improvement in both facilities and education in the last five years. AAP’s focus on education is why I support the party.”

We ask the boys about the protests at Shaheen Bagh. “Protesting is fine, but they shouldn’t block roads,” Farman briefly offers, as the boys turn the conversation back to economic concerns. “Hey, if Kejriwal makes bus tickets free after coming to power - then he will have my vote next election,” Prakash announces. 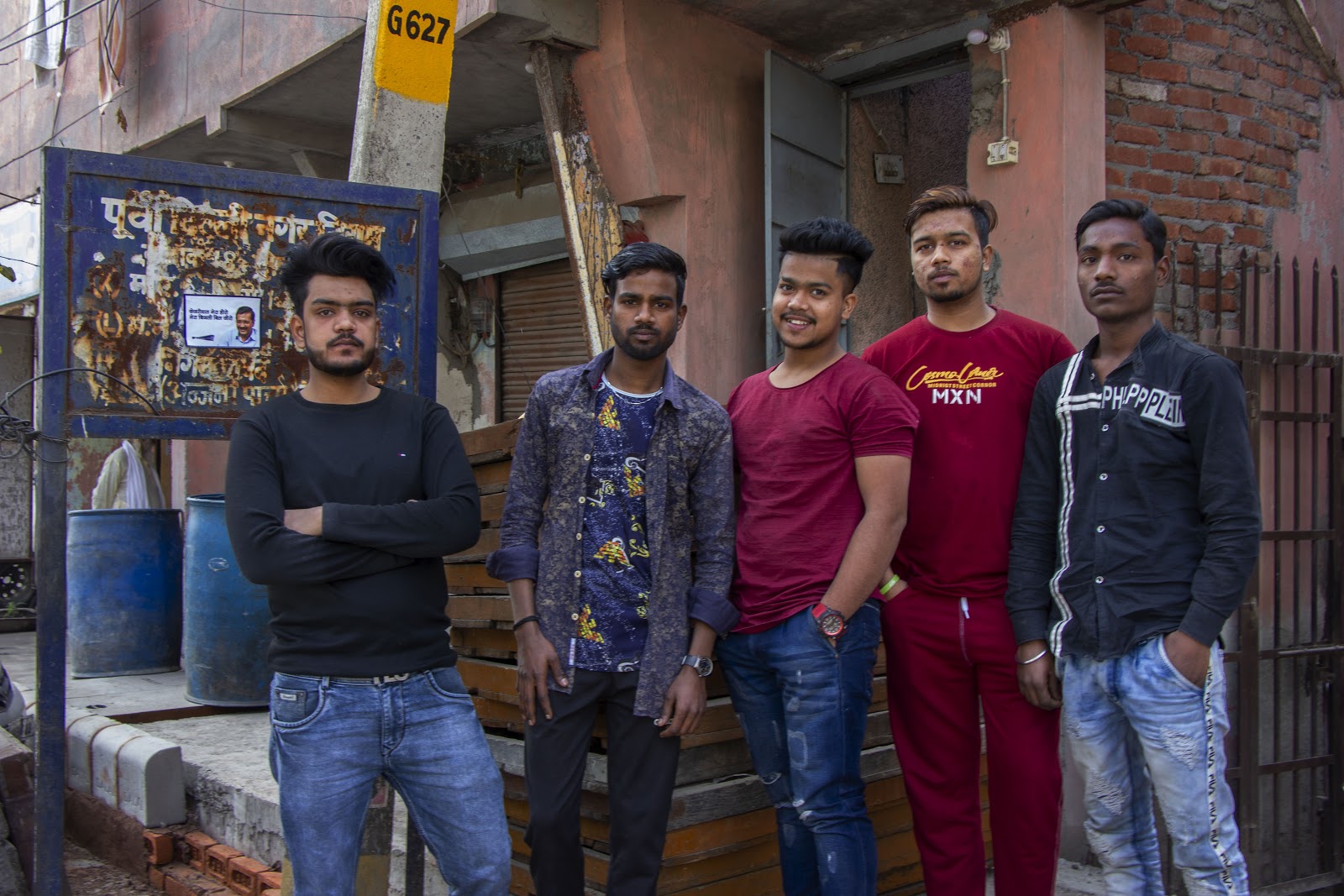 Rina Bhardwaj interrupts the conversation, cutting off the boys. “Let me tell you, Kejriwal has done a lot of work here. From mohalla clinics to education, our lives have improved.” A woman passing by agrees. “There’s been development,” she says. The two women do not want to be photographed - but are vociferous: “This time, like last, Kejriwal will win.”

Across Delhi - the AAP voter has followed the same narrative: Development in the form of regular and subsidised water and electricity supply, and a focus on health and education reform has earned the party a loyal vote base.

“In my living memory, Kejriwal is the first Chief Minister who has actually delivered,” says Amarchand, serving customers at a cart selling paan, chips and colourful sweets. “Government schools are now better than private schools. Hospitals have become affordable. There’s regular and free water and electricity - what more do we want?” 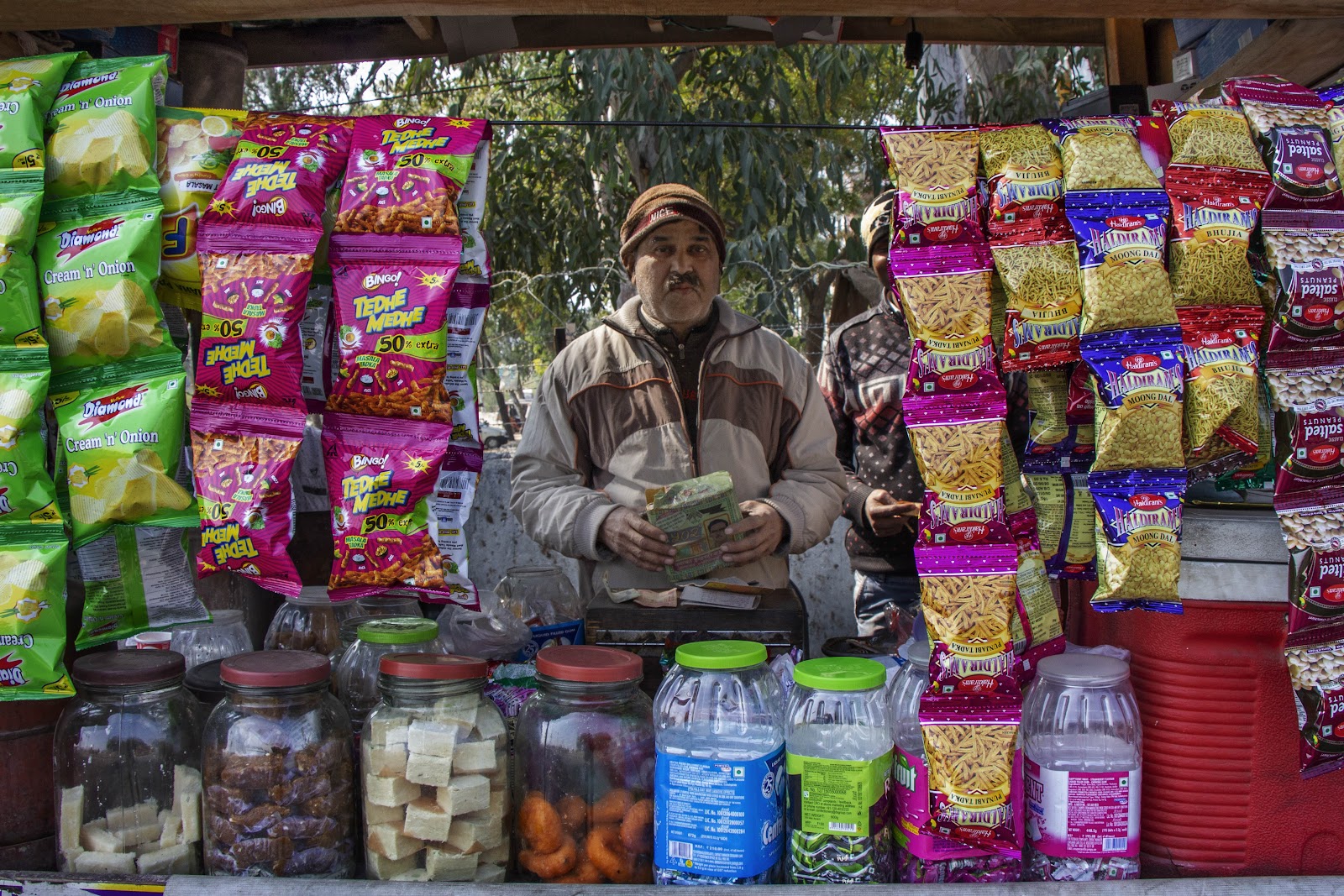 (Amarchand at his cart selling chips, sweets and paan)

Amarchand hasn’t heard of the Citizenship Amendment Act (CAA), but he knows of Shaheen Bagh and the police-crackdown on students in Jamia and Jawaharlal Nehru University. “I don’t support the protests - but I also know it’s all political,” he says. “The BJP is in power at the centre, if they wanted to stop it - they could. They are using it for political mileage. And it’s not working.”

He’s more sympathetic to the students. “The police shouldn’t have used force against them. They are students - and they were protesting peacefully, weren’t they?”

But Amarchand too is more interested in discussing economic development than political issues. “Modi has done his bit in strengthening the image of India, but not enough has been done for the poor,” he says. “The vote here is on the basis of development - and AAP has delivered on that front.”

“Is the water clean?” Ravi interjects. “Yes, there has been some work - but what’s the point of water if it isn’t clean and if it stinks?” In Trilokpuri’s block 20 - the cleanliness of water has proved to be divisive. “At least there’s water,” a passerby joins in. “I didn’t even get water to wash clothes five years ago.” The conversation turns into a debate, and we quietly slip away. 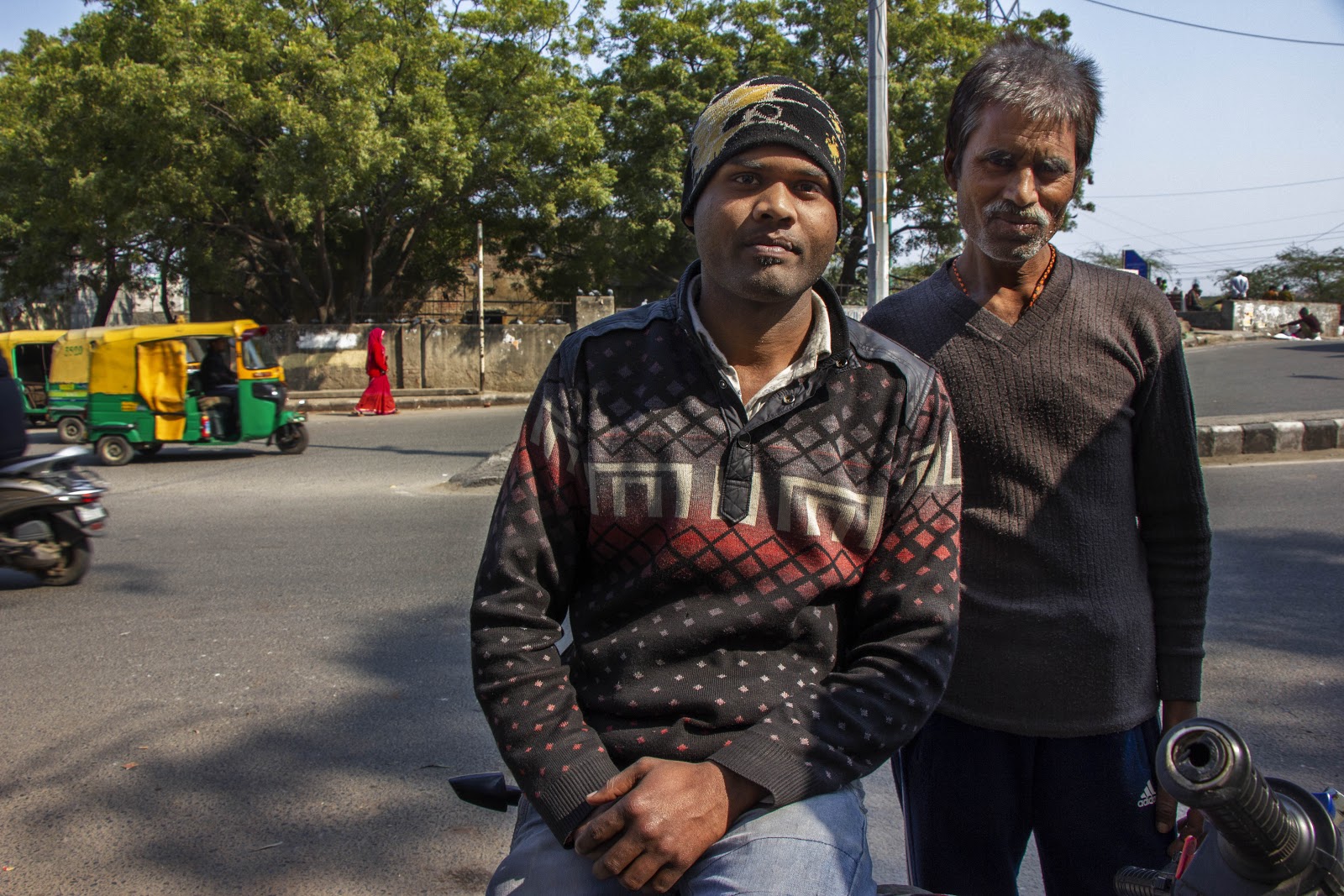 But there is no escaping the water debate in block 20. “Children are falling sick because of this filthy water,” an angry Ramcharan says. “And even in hospitals, there’s corruption - no one does anything without a bribe. What’s the point of free water or healthcare if it’s in this form?” 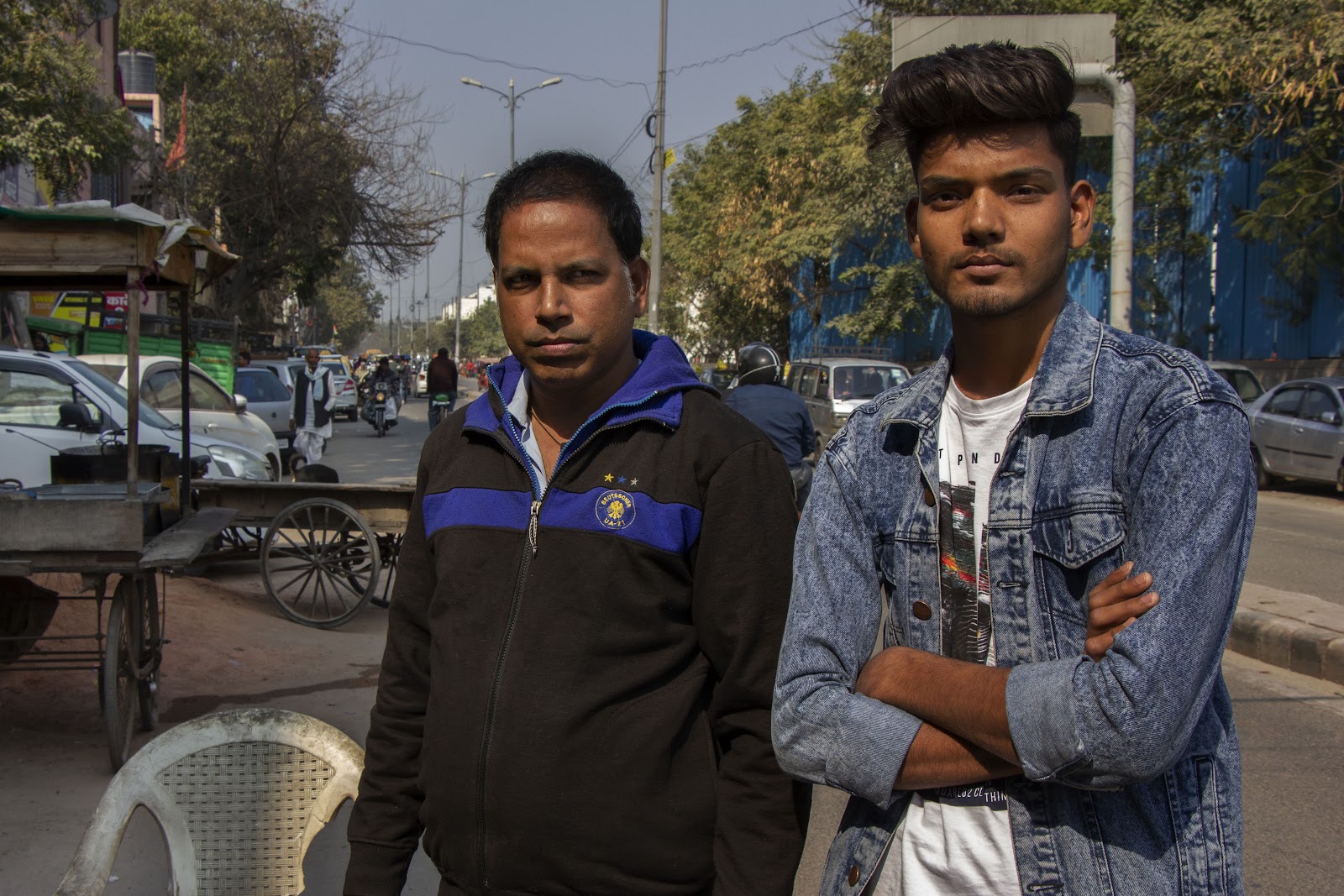 (Ramcharan, left. “Children are falling sick because of this filthy water,” he says)

“The main point is - life is better than before,” reasons Ramesh Gupta. “There has been development in the last five years. Cameras have been installed in every street, we have three mohalla clinics in this area, and schools have seen a massive transformation.”

In Trilokpuri - the vote this time isn’t divided along religious lines, but over the issue of development. Has Kejriwal done enough in the last five years to deserve another term?

“In India’s history, has any Chief Minister given residents free water and electricity? In my view, Kejriwal’s done more than enough to get our vote,” says Roshan Lal.

“Trilokpuri has always had religious tensions - but this time the vote is united. Why? Because of development,” he says. 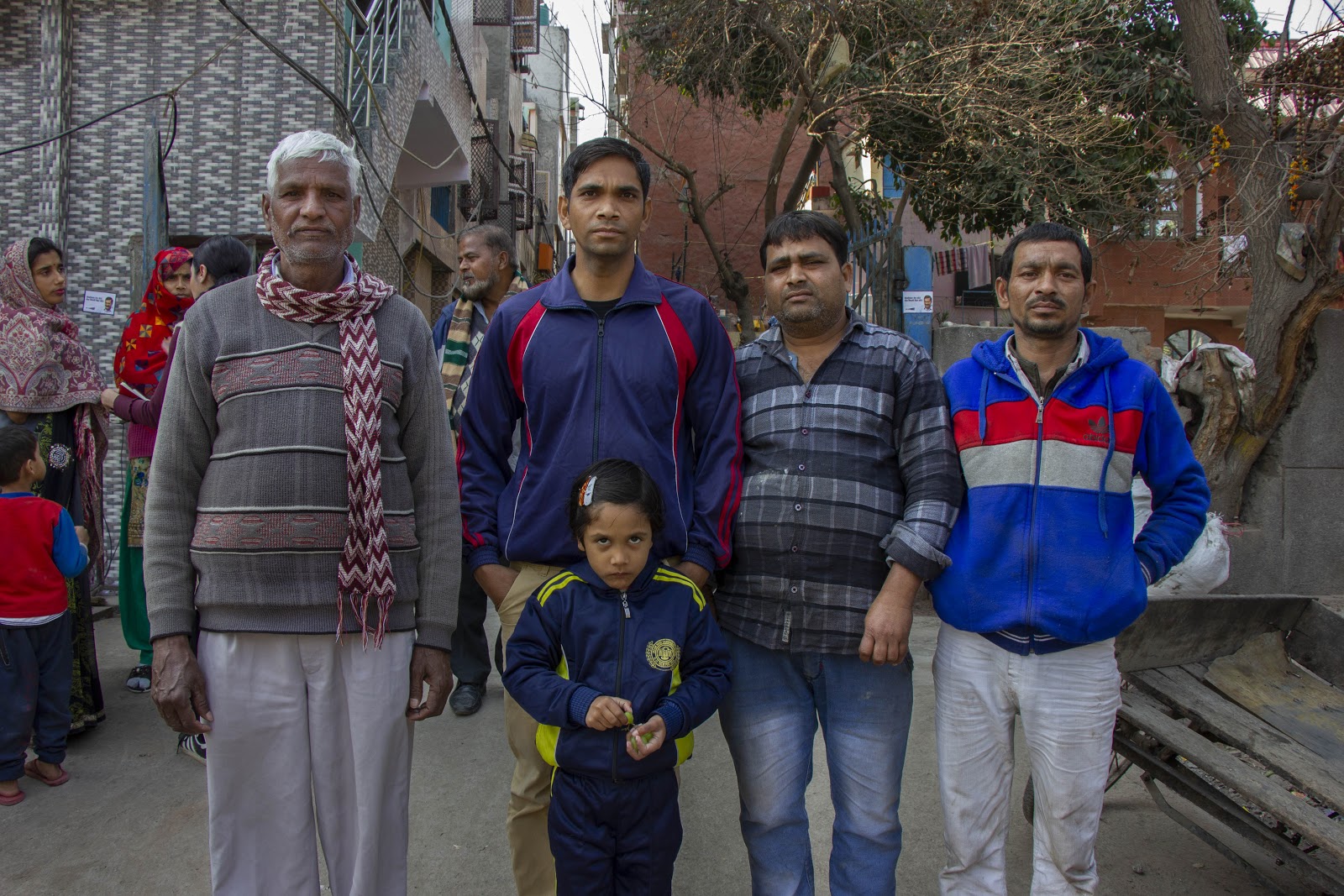 (Ramesh Gupta, Roshan Lal and others)

Amarchand had made a similar point. “We’re all brothers. We live together in peace and harmony,” he’d said, when asked about religious tension. “Yes - this marks a shift from the past. I think we can attribute this change to Kejriwal - people are now more concerned with policies that will better their lives, than with division.”

In block 28, where religious tensions are a lot more dominant as the area borders Muslim majority block 27, residents offer a different analysis. “Of course there’s a lot of religious division here; this is Trilokpuri,” Suman says. “But Trilokpuri is also poor, and because AAP offers free water, electricity, health and education - people are looking beyond religious identities. This doesn’t mean society is less divided; it just means that the less educated and less well-to-do have more immediate concerns.”

Suman supports the CAA, and says her vote remains with the BJP. She says that AAP has an edge nevertheless, because its policies of subsidies and freebies have “driven people mad.” 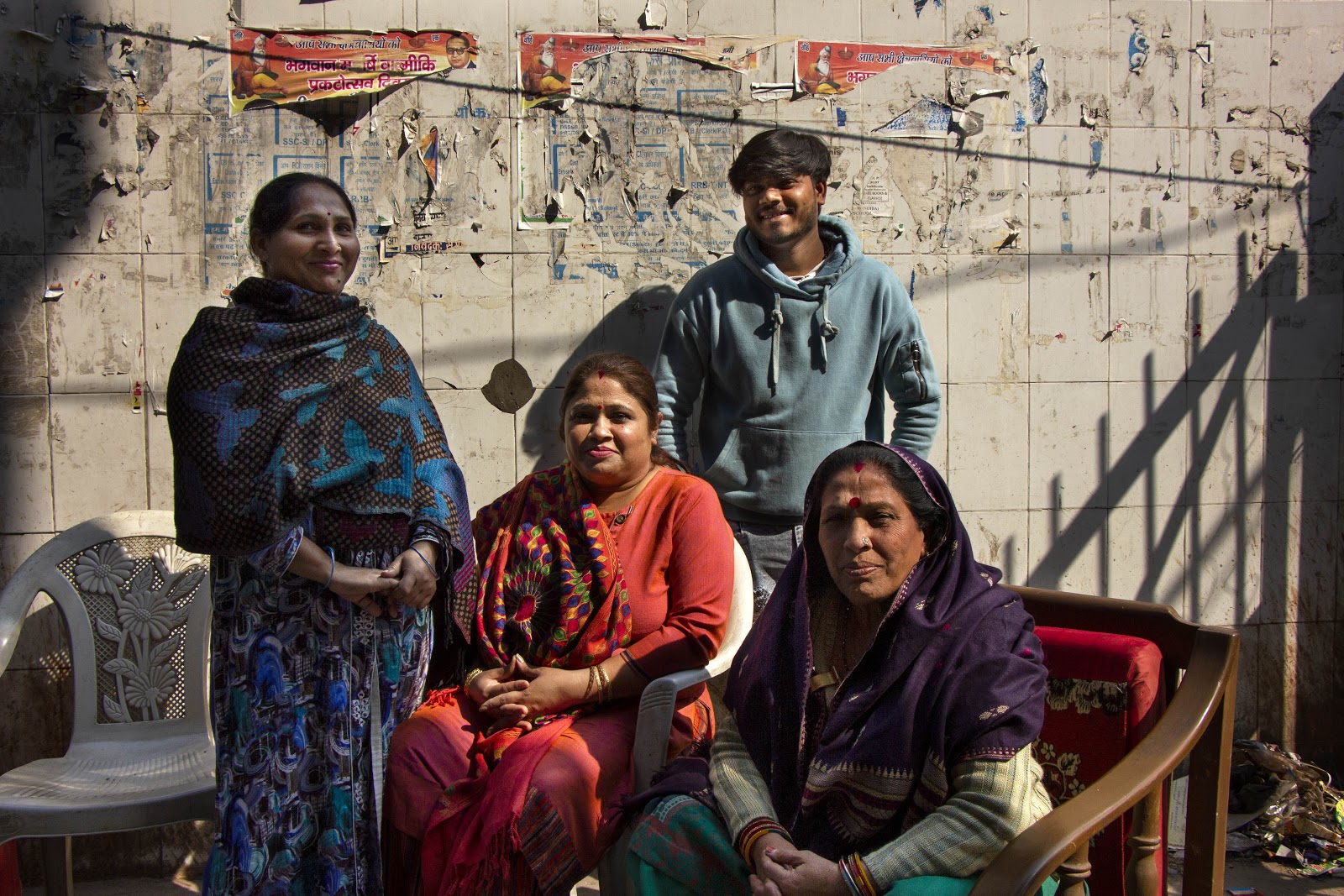 The women we speak to in Trilokpuri are largely vocal and well informed, speaking over men when making their point. As reporters, we usually struggle to record women’s voices, but this election there seems to be a clear shift.

“Kejriwal has worked,” Kiran says. “What he has promised, he has delivered. Be it mohalla clinics, education, water or electricity.” Elsewhere, Asha says women have benefited directly from Kejriwal’s policies. “Bus tickets are free for women,” she says. “We also have access to quality healthcare now.” 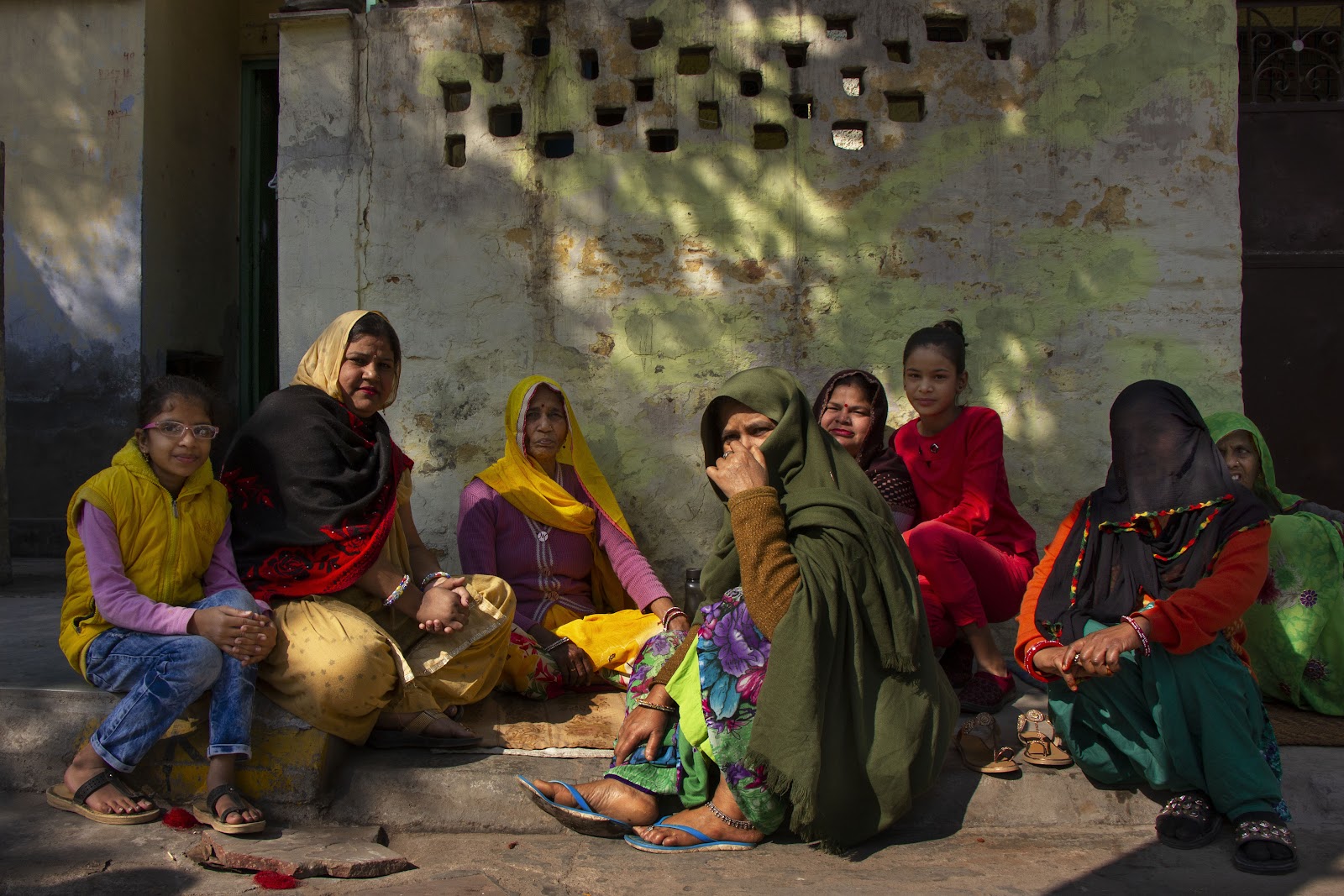 (Kiran, second from left, and friends. In Block 28) 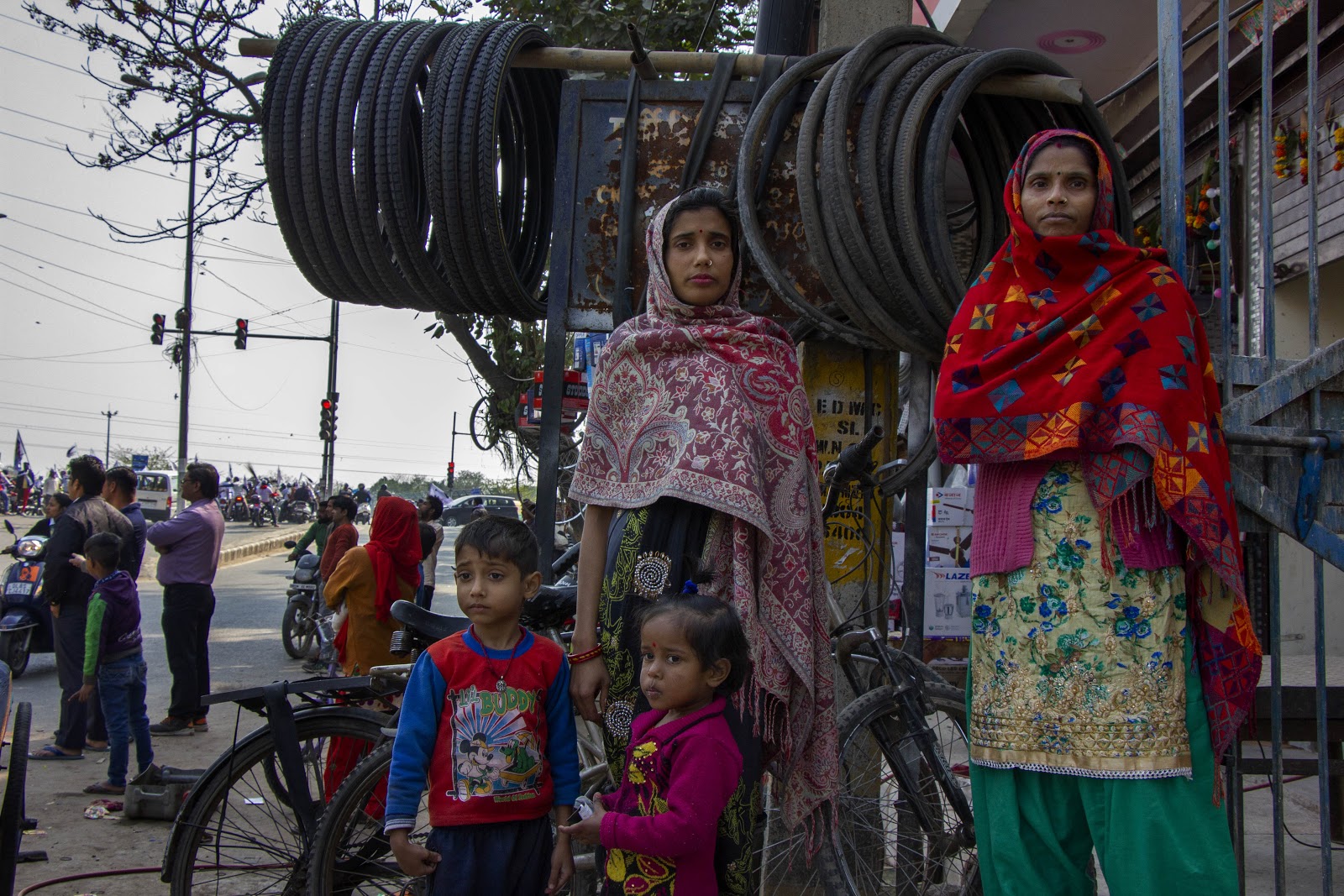 We come across the Congress office in Block 28. Borrowing (unknowingly?) from Shaheen Bagh, the men here are standing at the edge, with women party workers occupying the central space. They usher us in. The candidate is out campaigning, but his wife Kusum Lata speaks with us. “What have Modi or Kejriwal done for the people? The Congress has a proven history of working for the poor,” she says. “Congress gave ganga water, AAP is giving ganda (dirty) water,” Congress worker Manju Dixit says - referring to Trilokpuri’s water woes.

The women chat with us at length, while the men silently listen. “We will win,” they say. “Come again and we’ll give you celebratory sweets.” 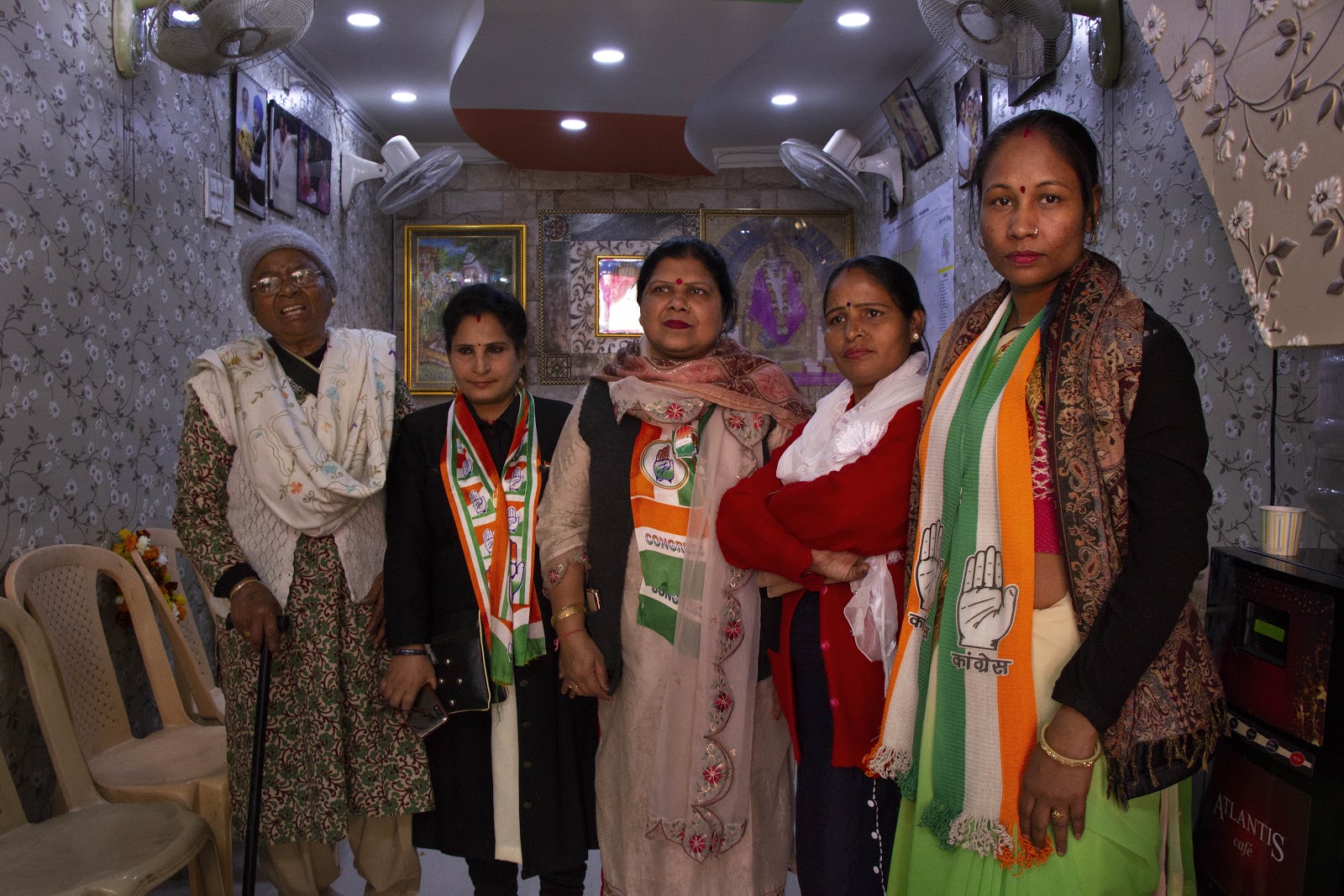 (At the Congress office in Block 28)

We cross over to block 27 - where the 2014 riots played out. “This is the first time a Chief Minister has done good work,” says Mohammad Aslam, who owns a fabric store in the local market. “Water, electricity are part of it, but he’s done a lot more.” Aslam repeats what we have been hearing thus far: AAP’s focus on development has improved lives.

“It’s a united vote,” he says. “It cuts across religious lines because of AAP’s performance.”

But as Aslam poses for a photograph, he frowns with concern. “Are you sure I won’t get into trouble?” he asks. This is a very different reaction to the camera-friendly residents of blocks 20 and 28. 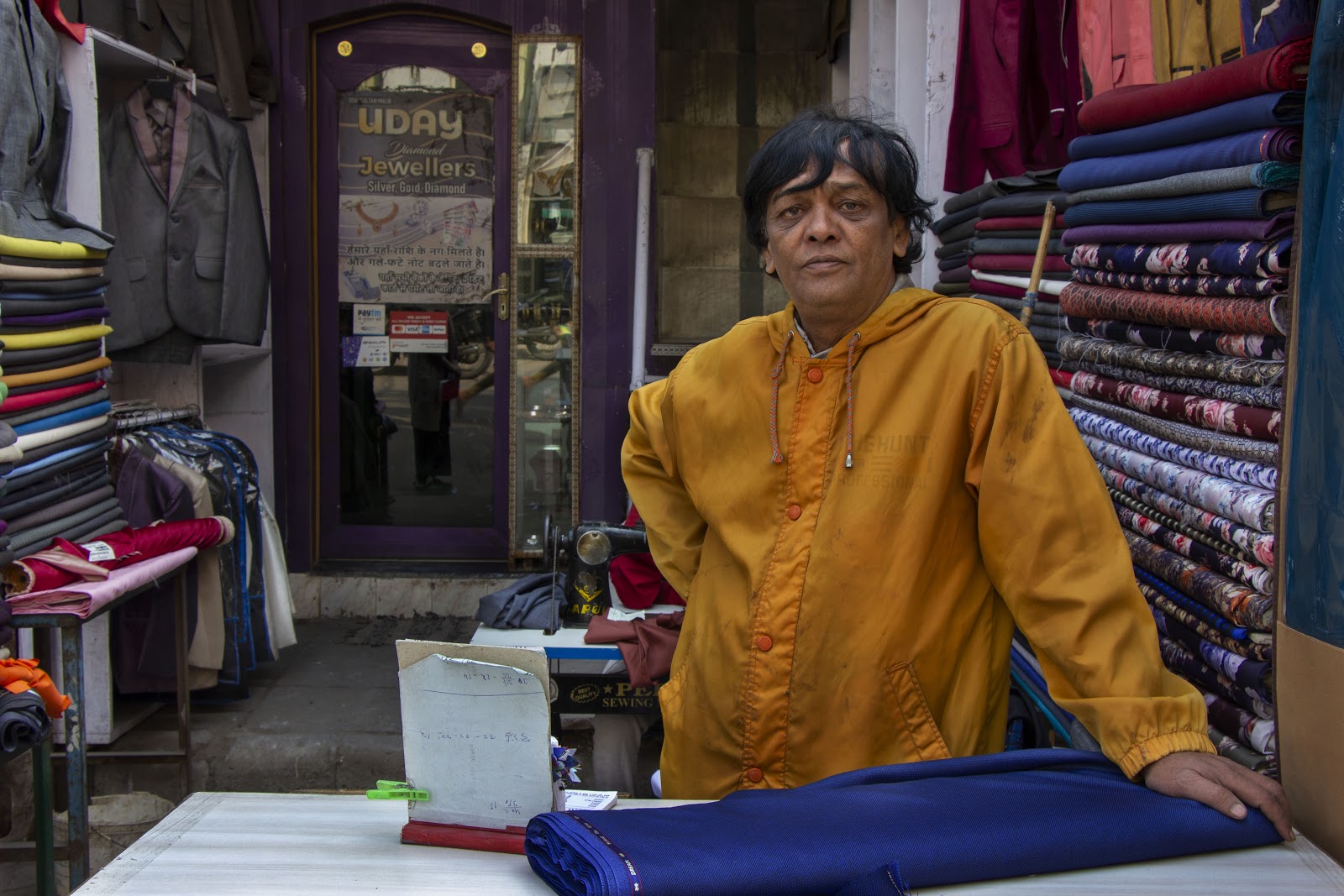 Next door, Samir Khan says AAP has the vote here, but refuses to be photographed. A young man in the shop then says, “Ever since the National Register of Citizens (NRC) - we’re afraid of any attention. Let us be.”

We walk away. We’d almost forgotten we were in Trilokpuri.