We went to North-East Delhi where communal violence had broken out on February 24, 2020 and carried on till February 26, 2020. As per latest figures available, 42 people have died, more than 200 are injured and thousands have been rendered homeless due to destruction and looting of their houses. We met with Muslim and Hindu families in Bhajanpura, Chaman Park and Shiv Vihar to understand their immediate concerns and whether ongoing relief efforts adequately address their needs.

1. NO RELIEF BEING PROVIDED BY GOVERNMENT AGENCIES

Based on seeing the ground situation and talking to affected people, it is clear that the Central and Delhi governments have failed in providing any modicum of relief to those affected or displaced by the recent spate of violence. In each place, families which had to abandon their homes due to violence are taking refuge with their relatives or have made private arrangements in different localities or are staying in temporary accommodation provided by private individuals. The Central and Delhi governments have not set up a single relief camp in the areas which we visited.

During the time of our visit from 3 pm to 7 pm, private vehicles carrying some relief material reached Chaman Park. We did not find any government agency or representative involved in co-ordinating or delivering relief during the time we were there. Further, everyone we spoke to reported having received assistance only from non-government entities. According to those present at the site, all relief including food, clothing and medicines are being provided only by private entities- either through religious bodies (Gurudwaras, Church) or through civil society groups.

The abdication by the Delhi and Central governments, of their basic responsibility of providing help to people rendered homeless and vulnerable due to violence is shocking. After maintaining a deafening silence for more than 3 days after the violence broke out, the measures announced by the Delhi government are inadequate to meet even the basic needs of affected persons - we did not find even those being implemented on the ground during our visit.

• Safe shelter with adequate privacy for families who have been forced to abandon their houses, where they can stay till their homes are rebuilt and the atmosphere is conducive for their return;

• Provision of cooked food, preferably through 24*7 community kitchens in the area and provision of milk, vegetables at subsidized rates through mobile vans;

• Establishment of 24*7 medical camps in affected areas including availability of gynaecologists and child psychologists;

• Provision of clean clothing for all affected persons;

• Setting up camps for helping people obtain copies of official documents which have been destroyed in the violence and arson;

• Immediate rebuilding and repair of all places of worship damaged in the violence;

• Delhi government officials must be present and easily accessible in the affected areas;

• Procedure for applying for compensation must be simple taking into cognisance that most affected people would have lost their documents in the violence and arson.

2. OBSERVATIONS FROM THE SITES WE VISITED

Nearly 1000 people, from the Muslim community, who fled from their homes in Shiv Vihar due to the violence, are taking shelter in private homes in nearby Chaman Park.

We visited two of these homes, where hundreds of people, mostly women and children, were sitting on the floor in different rooms. One room was functioning as a medical camp. The homes belong to private individuals who opened them up to provide emergency shelter. People were extremely anxious and traumatised about the condition of their homes and their future. Several people stated that when men attempted to return to Shiv Vihar to retrieve belongings, especially their documents, they were brutally attacked and there were reports of some people being murdered (we cannot verify this independently). Most families had fled with nothing other than the clothes on their backs. Children appeared to be experiencing a lot of trauma as well. They spoke of the violence they had witnessed- houses being burnt, people attacked by mobs. Several children were extremely concerned about missing out on their final exams, especially those who had to appear for board exams.

We met with a young man who had stitches on the back of his head and his left eye was swollen shut. He said he was returning from Karawal Nagar to check on the condition of his family on the evening of the 25th of February, when he was caught by 16-17 men who asked whether he was Hindu or Muslim. Upon hearing that he was Muslim, they mercilessly beat him. He received the stitches on his head at GTB Hospital but said he was too scared to return to the hospital to get his eye treated. 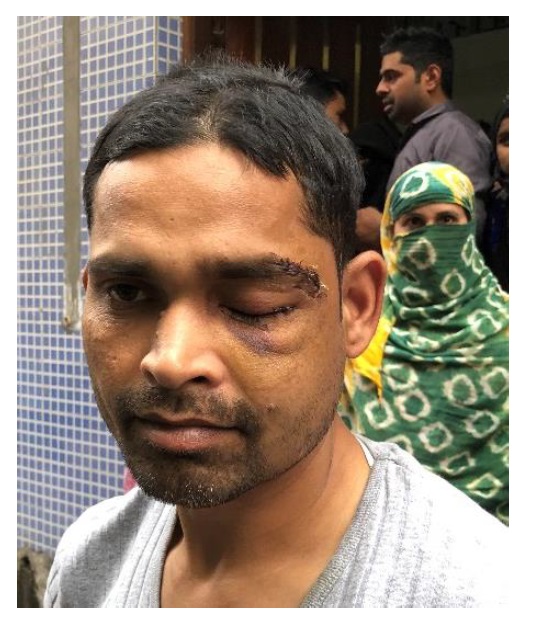 People shared that a Madrasa and 2 masjids in the area- Auliya Masjid and Madina Masjid - were set on fire and looted and destroyed from inside. People said they saw mobs armed with petrol bombs, guns and rods setting fire to homes and attacking people. People said that calls to emergency numbers of Police (100) and Fire Brigade (101) went unanswered. Most people took help of neighbours or relatives to escape while one family reported that the Police helped them escape from their house. As Shiv Vihar is a mixed locality and in several lanes, there are Hindu and Muslim families, we asked people whether they could see recognisable faces of their neighbours in the mob. Every person who we spoke to said it was outsiders who were in the mob- no local person was involved in the violence.

People said that they require accommodation in the local area with atleast one room dwelling per family and facility for cooking, till they can rebuild their homes or take other appropriate action. Most were terrified of returning to Shiv Vihar.

While private homes, in Chaman Park and elsewhere, have provided emergency shelter, it was clear that it would not be feasible for people to stay there beyond a few days. Relief in terms of food, clothing and health camps was being provided through non-government organisations.

People we spoke to had no information about the compensation scheme announced by the Delhi government and no one had even seen the form which is required to be filled up. No representative of the Delhi or Central government had visited them.

We visited the deserted galis of Shiv Vihar, which resembled a ghost town. Thousands of people, both Hindus and Muslims, have abandoned their homes due to the riots. Rapid Action Force personnel were stationed at every corner. Blackened walls of houses, charred remains of vehicles, burnt household items, furniture from shops strewn on the streets and barricades put up using almirahs and desks bear testimony to the tragic consequences of communal hate & violence. 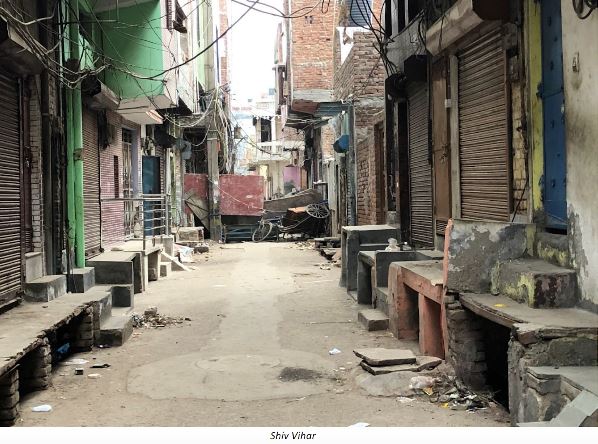 We came across the burnt Auliya masjid and could see the remains of gas cylinders which had been lit and thrown inside. It was our impression that primarily targeted attacks were made on houses and places of worship of Muslims. Some houses belonging to Hindus were also burnt and damaged. 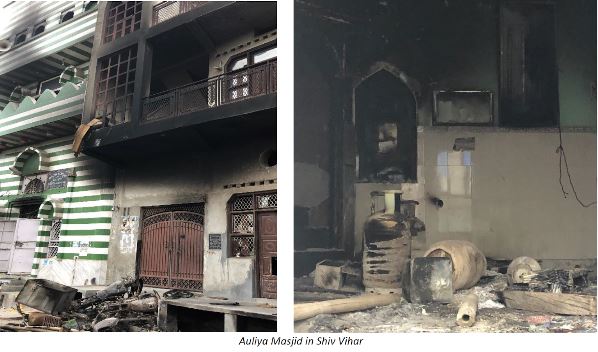 We could only locate a few Hindu families in the riot affected area, and most of them said they were taking shelter in nearby localities of Johripur and other areas. They said that all the Muslims had abandoned their homes. We met with Mithlesh and Sunita, who are neighbours and run a small halwai (sweet) shop in Gali no. 14, 25 foot road. They said that armed mobs entered lanes from both sides and burnt dwellings, destroyed homes, attacked people. They said they tried calling the police and fire brigade repeatedly, but with no success. Two brothers-in-law of Sunita who were standing in the lane during the violence were injured. One is admitted to GTB with severe burn injuries while the other was standing there with his head in a bandage. The women said that while their houses were not set on fire, they left the area on Wednesday morning (26th of February) due to the violence and when they returned to retrieve their belongings, they found furniture and appliances in the house had been damaged. They said that it appeared people were brought in from outside to do this violence as they could not identify any known person from the locality. 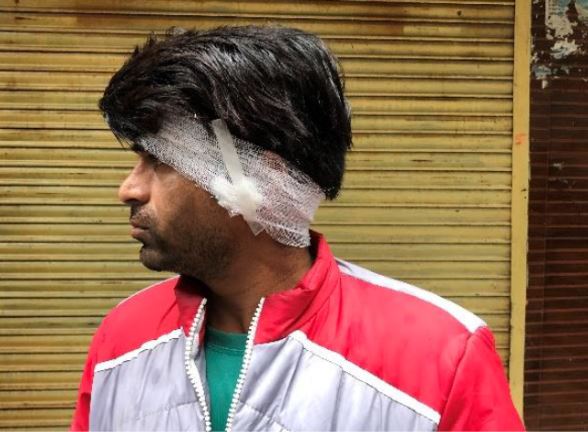 Several people (only Hindus as no Muslim families have been able to return) reported that the SDM had visited the area and taken down their details for the compensation form.

While travelling towards Bhajanpura from the Seelampur metro station, we saw that most shops had their shutters down. We saw several burnt school buses, trucks, vehicles and also the remains of the burnt petrol pump.

At Bhajanpura main road, we saw the Mazar which had been set on fire. It was barely 10 feet away from a Police Help Centre (located on the same pavement). 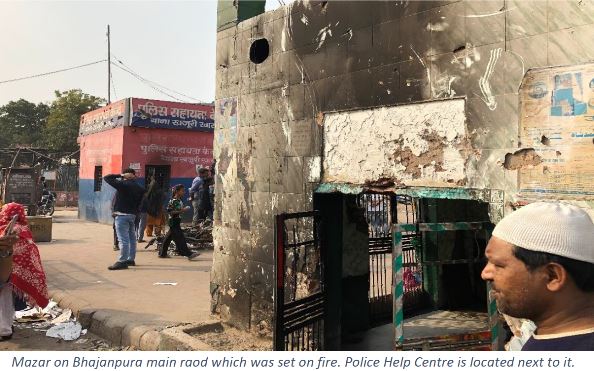 The first three shops on the left side of the road were completely burnt. We met with Azad and his brother Bhoora, who along with 2 other brothers owned these shops - a restaurant called Azad Chicken Centre, a shop selling peanuts and chickpea and a fruit shop. In the whole market only these three shops had been set on fire. Burnt fruits, furniture from the restaurant lay strewn around. The brothers said that a mob set the shops on fire around 2.30pm in the afternoon of the 24th of February, 2020 and started pelting stones on them. Their houses which are located on top of the shops also caught fire. They tried to douse the flames engulfing their vehicles and shops but when tear gas shells were thrown into their houses, 16-17 of them (including their little children, women and workers from the restaurant), saved themselves by running to the terrace and jumping into the back-lane from a 12 feet high terrace. They said that 8-10 policemen were standing and watching but did not control the mob, as perhaps they were vastly outnumbered. Despite repeated calls to emergency numbers, the first fire brigade arrived only around 7 pm by which time the shops and houses were completely gutted and all the belongings inside were reduced to ashes. Seeing the condition of the house and the shops, it was clear that the structures were extremely unsafe and would need to be demolished and then rebuilt. The brothers felt that only their shops were targeted as they were Muslims. While none of the other shopkeepers helped during the attack, most of them sat with the brothers through the night and extended solidarity.

The brothers shared that they returned at night and tried to secure the entrance in a bid to protect their valuables and belongings, but everything had already been ransacked and looted including money and jewellery kept in the house. All the remaining clothes, documents had been burnt and household appliances and fixtures had been broken including the wash basins. They had not heard of the compensation offered by the Delhi government and said no official, other than the Police had met with them. When we told them about the compensation announced, they said that the government should extend loans as well as the compensation amounts declared may not be adequate. They were keen to rebuild and restart all three shops. The brothers proudly shared that their grandfather Bundu Khan had served in the Indian Army.