Government mismanagement has left many without access to ration

A small hut in a remote village with clothes hanging on the brick walls and empty boxes scattered on the floor is home to a 65 year old blind Adivasi woman, Kasturi Bai. When she caught a glimpse of the team from Ekta Parishad coming to her place with the monthly ration supply, her face lit up.

She hasn't received any ration from the government for the last two years. Unfortunately, that is the case for many Adivasi families in Madhya Pradesh.

India is in a nationwide lockdown for the last three months owing to the coronavirus pandemic. The country has seen thousands of migrant workers struggling to get back to their homes; they were left unemployed because of the lockdown. Many of these workers are either Dalits or Adivasis, primarily from states like Madhya Pradesh, Bihar, Jharkhand etc.

For these workers, reaching home is not the end of their journey of survival.

Sunil, 37 working as a daily wage worker in Gwalior returned to his home in Karahal in Sheopur District last month during the lockdown. He had hoped that the government would provide him with monthly rations. He went to the ration distributor where he was told that his ration card had been cancelled.

“I have two children to feed, I have no work and no money. I don't want my family to die of starvation” he says.

Ram Charan, another Adivasi daily wage worker from a neighbouring village also has a similar issue. “They threatened me and kicked me out of the ration distribution premise. They said my ration card was cancelled and they cannot provide me with rations,” he tells The Citizen.

“Try to imagine my situation, I have to beg from others for my family. This lockdown made the situation worse for me. I went to the Panchayat, Patwari and many other officials but got nothing” he adds.

Neeraj Srivastava, a social worker in Ekta Parishad says that people like Ram Charan and Kasturi Bai are the most ignored and most oppressed section of society. They are invisible to the government.

There are 52 Panchayats near Karahal. In every village there are 15-20 families who are facing the same issue. This means 2000-2500 families are without access to monthly ration and most of them are Adivasi families.

Why have so many people’s ration cards been cancelled?

“We started a process to renew the cancelled ration cards and it was scheduled to be finished by February but it got delayed and then the lockdown happened, but we are trying to renew their ration cards as soon as possible” he told The Citizen.

“We have gotten orders to check and renew the ration cards of the rightful card holders after the lockdown” she told The Citizen.

Even if the ration cards were cancelled due to the absence of the card holder, why is Kasturi Bai not receiving ration? She can’t go outside and she is always at home.

Neeraj says that it is sheer mismanagement by the government that is to blame. Ekta Parishad is helping these people by providing them with basic monthly rations which are essential.

This mismanagement has taken a heavy toll on these people’s lives. Many villages here are situated in remote areas; some villages are not even connected by road.

“It has been two years since I last got my ration. When this computerised system came, they said my name is not in the list and I won’t get the ration”, says Nandu.

Nandu is also a labourer in a small remote village near Karahal town. He has seven mouths to feed but this lockdown has left him unemployed.

“I am illiterate, half the things they say at the office I don't understand” he says, his voice breaking.

“I know 20 people who are not getting rations for the same reason but no one is listening to us. What should we do?” he says, angrily. “Some people from the government came with rations to the village during the lockdown. They gave us 5kgs of atta. How can a family survive on just 5kgs of atta?” he adds.

The people here were always ignored by the government, says Neeraj. “We are trying to help these people as much as we can but we have our limitations as well.”

They are not receiving rations for the last two years. As many of them work as labourers in other states, they only got to know that their ration cards were cancelled when they returned to their villages after the abrupt lockdown.

Kasturi Bai received her ration last in December 2018 as per her ration card.

This might be a case of mere mismanagement by the government but for people like Kasturi, Sunil, Ram and Nandu, it is an additional nail in the coffin. 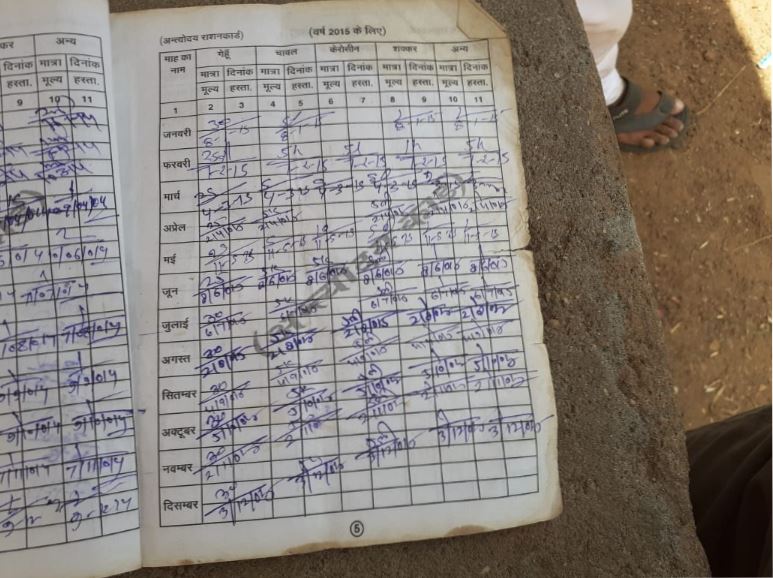