A city of slum-free millionaires?

On July 8 the East Delhi Municipal Corporation together with the Public Works Department and Delhi Police demolished 60 houses in the Laxmi Market in east Delhi.

The EDMC said it was only following a Delhi High Court order to remove “encroachments” on the service road. According to the authorities, they have designated the area a “right of way” in the Delhi Master Plan 2021.

Later chief minister Arvind Kejriwal assured the public that his government would provide a shelter facility with arrangements for food, water and sanitation to the displaced residents.

According to Dev Pal from the Delhi-based Housing and Land Rights Network, “The residents of the basti were staying there for more than 40 years, and suddenly, in just a moment, their homes were brutally destroyed, rendering them homeless at the time of the biggest deadly crisis.”

Although community leaders and area residents reportedly said the existing road was “more than enough” for pedestrians and drivers, the authorities clearly felt that widening the service road in accordance with the Plan was more important than protecting these existing 60 pukka houses.

Why was this service road remembered after 40 years of this colony having existed, and 20 years after the Master Plan, which is now getting renewed next year?

According to Vijay, a resident whose home was demolished:

“Currently our case is in the High Court. We could not put our case strongly, maybe this is why we couldn’t save our home. I was born in that house, and when they were demolishing it my heart just sank. My family and neighbours have great memories of that place. Fortunately, at least they cannot remove that.”

Vijay said that “Kejriwal ji, Rajendra [Pal Gautam] ji and even Gautam Gambhir visited that place, gave us assurances, but we don’t see anything happening. People are on the streets, in homeless shelters, and those who could afford it have taken a place on rent”. 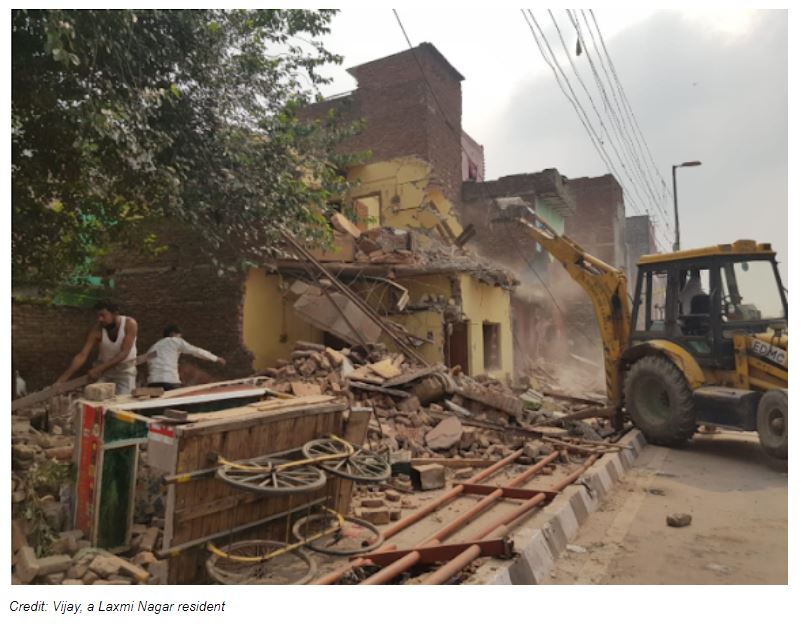 At a time when the whole world has been advised by experts and even governments to “stay home” during the COVID crisis, but such violations by the EDMC, PWD and Delhi Police are going unremarked.

Notably, the homes demolished by the authorities were of waste pickers and sanitation workers, who are playing a key role in providing essential services, more so during the pandemic. Their jobs have been informalised, and they are not legally protected or recognised by the government.

Due to the refusal of governments to provide emergency relief measures, the majority of waste pickers have lost their livelihood and earnings. Many have reportedly left the city as they could not pay rent. The biggest reason for this is governments’ denial of affordable rental housing, or of livelihood protection.

The Delhi Master Plan, which is the only legal framework defining land availability in the city, talks about making Delhi a global metropolis and a world-class city. It says that colonies not authorised by the government pose a serious problem given the “huge population” of people who live there. It has the stated objective of converting Delhi into a “slum-free city”.

Given this context, the authorities’ persistent evictions and demolitions are not surprising. The residents of these bastis, who are targeted disproportionately, remain helpless about where to stay and survive, given the government’s failure to provide affordable housing.

The Delhi Master Plan is an undemocratic policy document. Its “vision and mission” does not recognise the people who build this city. It has now become a necessity that we work to fill its existing gaps and loopholes, and make a people’s vision plan to replace it.

Many civil society organisations, activists, academicians, researchers and practitioners, community leaders and city makers have come together in a campaign called Main Bhi Dilli (I Too Am Delhi) to demand a more inclusive city. The larger goal is to continuously make an attempt to include the urban poor, informalised workers and families pushed to the margins. 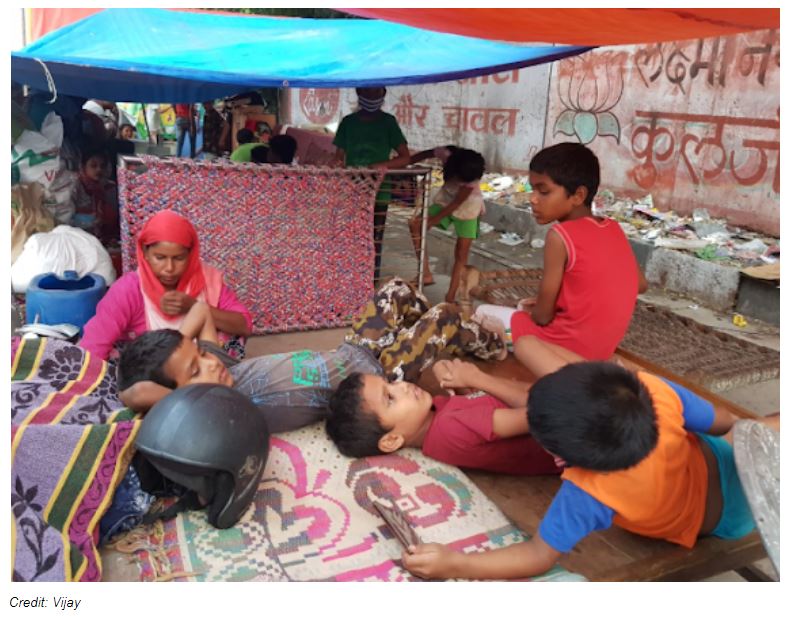 The Delhi Master and Zonal Plans 2021 mark the East Laxmi Market area as a residential area. The authorities wanted to demolish the colony so they can widen “the masterplan road” as per the zonal plan for this area, which specifies that it should be 30 metres wide. As the road was only 20 metres wide, the authorities felt it was appropriate to demolish 60 homes. 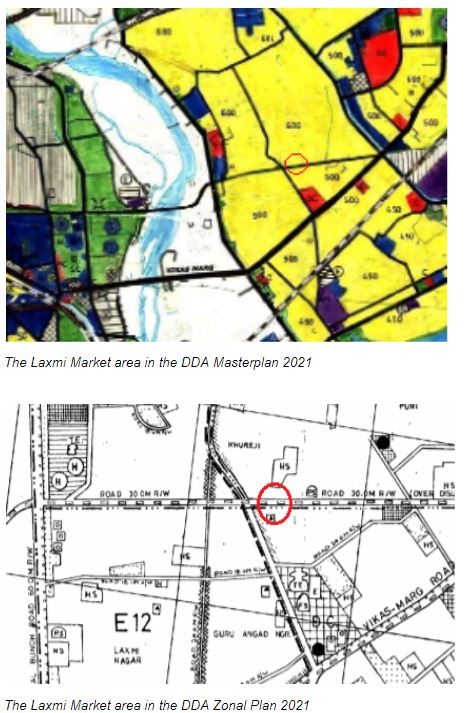 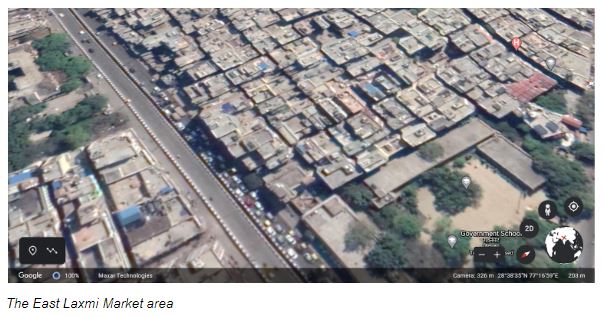 The case of East Laxmi Nagar is not new. Notable cases of the authorities demolishing Delhi residents’ homes include the Kathputli colony in 2017, Shakur Basti in 2015, and for the Commonwealth Games in 2004 where lakhs of people were evicted resulting in injuries, deaths, illness, loss and destruction of possessions, and disemployment and loss of income.

According to data collected by the Housing and Land Rights Network, in 2017 alone government authorities in India demolished some 53,700 homes, evicting at least 2.6 lakh people.

Governments must immediately take the following measures:
– Put an end to forced evictions, demolitions, and displacements of people living in informal settlements. No one should be forced by the municipal or other authorities to leave their homes, and no such demolition and eviction drives should be allowed to happen any more.
– Issue a legally binding and clearly worded circular/order to Prohibit Evictions, applicable to all households, communities, colonies and bastis.
– Give a binding assurance to all waste pickers and all basti-dwellers that they will not be assaulted and humiliated. Undertake proceedings for strict legal action against the officials and authorities who were responsible for this discriminatory and violent act.
– Provide those who had to face this terrible situation with immediate rehabilitation, fair compensation and all essential services.
– Take measures to cut red-tapism and administrative discretion in implementing orders, rules and policies on the protection and regularisation of unauthorised bastis and colonies.

As for the forthcoming Master Plan 2041, we demand that:
– The DDA must have space and facilities for everyone in the city and it needs to make sure that it matches people’s interest. Moreover, all existing bastis and colonies need to be mapped and listed in the upcoming Master Plan.
– The DDA must ensure all Delhi residents that the upcoming Master Plan will be participatory and inclusive at all the levels of its making. This will require proper data and information collection as well as public participation before it can be finalised.
– Public participation in relation to city planning is a process that should not stop. People should be able to continue giving their suggestions and objections.
– Awareness training and drives regarding community rights must be carried out constantly.
– Plan and design adequate and affordable housing infrastructure with all basic services on an urgent footing.

Governments’ constant effort to undermine our opinions and intellect results in this violation of our rights.

Everybody in the city should know their city and its masterplan. People must be able to identify their location, neighborhood area, workplace, public spaces and roads in the masterplan maps. They should also be able to read and understand the planning document and the context behind it. Its language should be simple and the document should be available in all regional languages.

Urban design and planning have a threatening outlook towards the urban poor majority. Our city planning is anti-poor, and extremely cruel and inconsiderate towards their homes and livelihoods and lives. It’s high time we stop this emerging danger in the name of “development and beautification” for a wealthy few. No one should be denied their fundamental constitutional rights by ruthless acts like evictions.

How Effective are Embankments in Controlling Floods? 9 hours ago

Farmers in Delhi, Determined and Disciplined