To Sir, With Love: Students Write to Hany Babu on his Birthday

Present and former students of Hany Babu MT have extended their solidarity to their professor, who is currently in NIA custody, by recounting personal experiences and highlighting his “gentle” and “compassionate” nature in letters addressed to Babu on his 54th birthday in jail.

Babu—an Associate Professor in the Department of English, Delhi University—was arrested by the NIA on July 28 in connection with the Bhima Koregaon-Elgar Parishad case.

Students in Solidarity with Hany Babu, a collective comprising the professor’s former and current students, put out a call for the letters keeping in mind Babu’s birthday on August 16. Over 250 letters have been received in response.

“We, the students of Prof Hany Babu are angry. It should be a sad day for the country and everyone who has been a student should be concerned that a brilliant academic, and more so, a morally upright and an innocent man is spending this day alone in custody,” they stated in their press release.

Demanding that Babu be released immediately, the collective said, “This act of suppressing dissenting voices in academic spaces by the State threatens the very fabric of the Indian democracy.”

According to the statement, Babu has been a strong advocate for social justice and has worked extensively in the anti-caste movement. As a professor of linguistics, the students said that his classes have been about demanding an equal space for varying languages in India and looking at English as an emancipatory language.

“His teachings have made, and continue to make students critically approach caste supremacy hidden within the rubric of the Indian language structure. He has always highlighted the need for equality amongst language, and language speakers,” they stated.

The students highlighted that eleven activists and scholars have been arrested in connection with the Bhima Koregaon case, with nine having been in prison for almost two years, as undertrials.

The letters spoke of Babu’s attempts at creating an inclusive environment in the university space, the popularity of his classes and the dedication he showed in both teaching as well as helping students solve day-to-day issues.

Jyotirmoy, a student of Babu’s wrote: “Like I have always said, if it was not for you, I would not learn to be proud of my mother language Kamrupi, use it without shame in public, and develop a lifelong academic interest in language and culture.”

Samiksha, another student wrote in her letter: “Happy Birthday, sir. You have been one of the best professors I have ever come across. Your sincere efforts in a class taught us not just what was in the books but also about the semantics of inclusivity and equality. We take immense pride in being the students of a Professor who speaks up against the wrongs and injustice in our world. We continue to learn from you.”

The letters also included wishes from those who were not students of Babu but nevertheless, came forth to express their grief and anger at the current situation.

Abeer, a young student wrote: “I do not know you, yet I feel like I do. From what I’ve heard, you seem like a fatherly figure to many which to me is an ultimate form of respect.”

Another student Asief recounted his experience with Babu: “We first met regarding some internal mark discrepancies students were facing in the department. You guided us and from there, you have always been the go-to person for some of us whenever some issue related to the department or university crops up. You have been a welcoming presence in an unwelcoming space like Delhi University. You are an inspiration for students like us. Many students express their shock, anger and disbelief about the arrest and they also swear to stand with him…”

In their statement, Students in Solidarity with Hany Babu said, “We strongly believe that a teacher, mentor and activist like Hany Babu is an integral asset to the university space and his absence only ensures the further marginalisation of students from marginalised communities.”

The collective published a few of the students’ letters on their Instagram page: 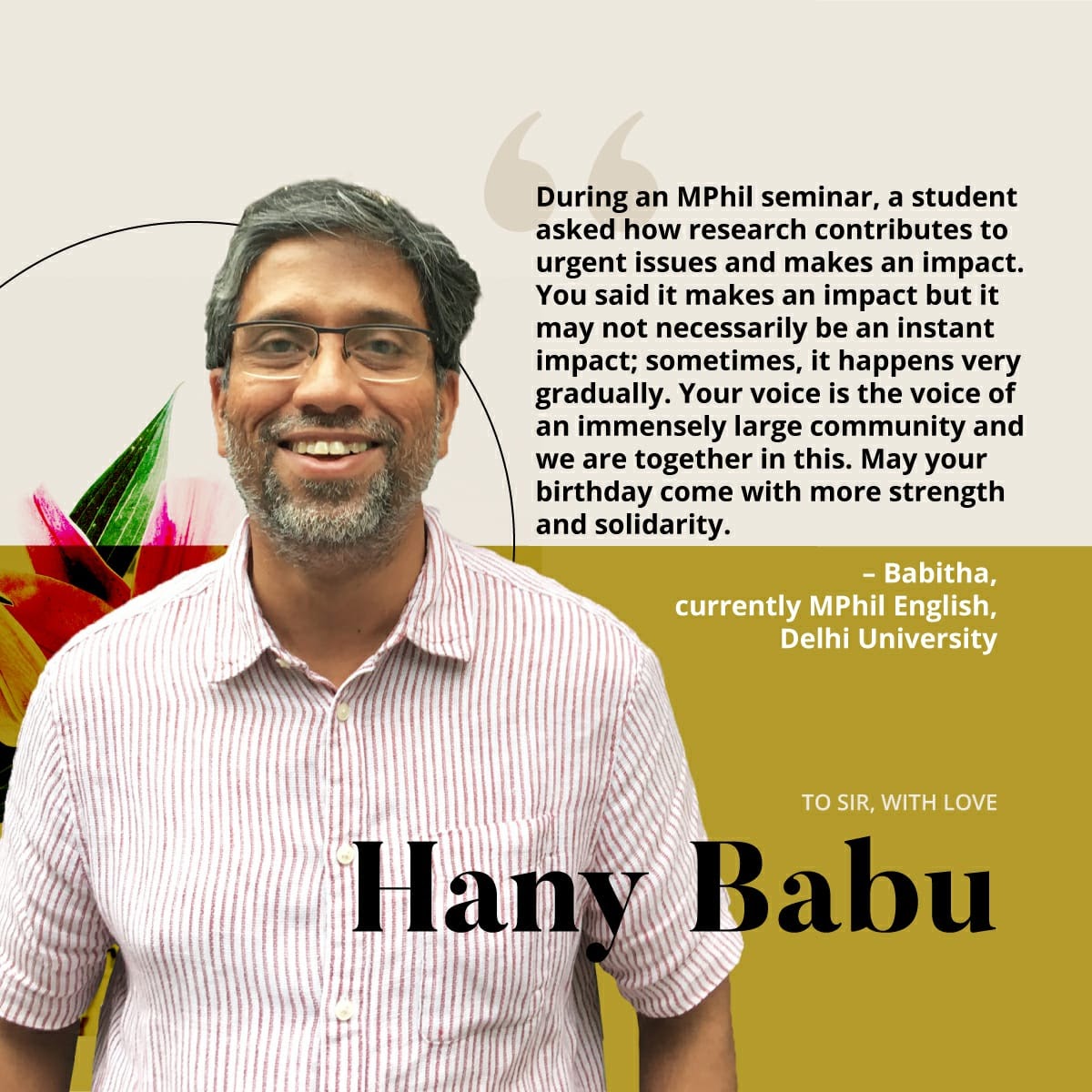 “During an MPhil seminar, a student asked how research contributes to urgent issues and makes an impact. You said it makes an impact but it may not necessarily be an instant impact; sometimes, it happens very gradually. Your voice is the voice of an immensely large community and we are together in this. May your birthday come with more strength and solidarity.” 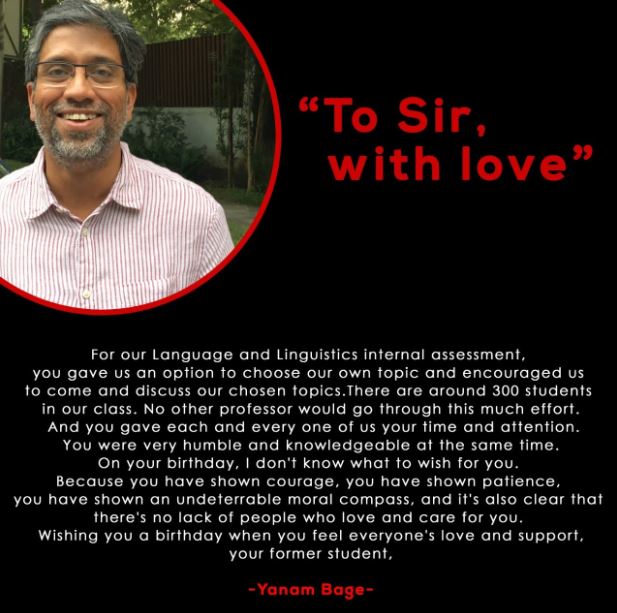 “For our Language and Linguistics internal assessment, you gave us an option to choose our own topic and encouraged us to come and discuss our chosen topics. There are around 300 students in our class. No other professor would go through this much effort. And you gave each and every one of us your time and attention. You were very humble and knowledgeable at the same time.”

“On your birthday, I don’t know what to wish for you. Because you have shown courage, you have shown patience, you have shown an undeterrable moral compass, and it’s also clear that there’s no lack of people who love and care for you. Wishing you a birthday when you feel everyone’s love and support, your former student, Yanam Bage.”

“The times in which we live have forbidden happiness it seems, especially for those few who, like you, dare to say that happiness cannot be celebrated till we are all equal. There might be nothing happy about this particular day for you but from now on your birthday will be a happy day for all of your students and for those who you inspire.” 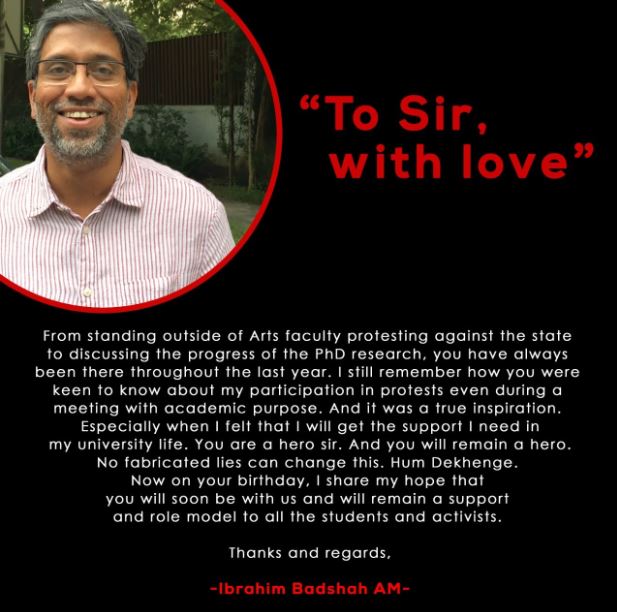 “From standing outside of Arts faculty protesting against the state to discussing the progress of the PhD research, you have always been there throughout the last year. I still remember how you were keen to know about my participation in protests even during a meeting with academic purpose. And it was a true inspiration. Especially when I felt that I will get the support I need in my university life. You are a hero sir. And you will remain a hero. No fabricated lies can change this. Hum Dekhenge. Now on your birthday, I share my hope that you will soon be with us and will remain a support and role model to all the students and activists.”