A day after Attorney General KK Venugopal gave his consent to initiate contempt proceedings against him, Kamra, in an open letter addressed to top court judges and AG Venugopal, stated, “My view hasn’t changed because the silence of the Supreme Court of India on matters of other’s personal liberty cannot go uncriticized. I don’t intend to retract my tweets or apologise for them. I believe they speak for themselves.”

Kamra also suggested that since “a time slot before the Supreme Court is a scarce commodity”, instead of hearing the contempt of court plea against him, the SC should consider using the time allotted to hear other matters and parties “who have not been as lucky and privileged” to “jump the queue”.

“May I suggest the demonetisation petition, the petition challenging the revocation of J&K’s special status, the matter of the legality of electoral bonds or countless other matters that are more deserving of time and attention,” Kamra stated.

The recent Supreme Court order granting interim bail to Republic TV’s editor-in-chief Arnab Goswami in a 2018 abetment to suicide case formed the backdrop for Kamra’s controversial tweets. According to The Indian Express, Justice DY Chandrachud, while delivering the verdict in this case, stated, “SC is unhappy that HCs, which are constitutional courts, are not doing enough in matters where personal liberty is denied…”

On the question of personal liberty, many individuals took to social media to highlight names of other journalists and activists who have not been granted bail and remain in prison today. Kamra, in his statement, also said that all that he tweeted was from his point of view of the Supreme Court giving a “partial decision”.

According to Bar and Bench, AG Venugopal received a total of 10 letters seeking his permission to initiate contempt proceedings against the comedian, of which he granted his consent to eight.

Among those who sent letters to the Attorney General are two Pune-based advocates, a Mumbai-based lawyer and a law student. In his letter granting consent to law student Skand Bajpai, AG Venugopal said that certain tweets by Kamra were “not only in bad taste but clearly cross the line between humour and contempt of the Court.”

Some of the tweets that have courted controversy, enraging many and causing a few to seek contempt proceedings against Kamra, include: “All lawyers with a spine must stop the use of the prefix “Hon’ble” while referring to the Supreme Court or its judges. Honour has left the building long back…”

“DY Chandrachud is a flight attendant serving champagne to first class passengers after they’re fast tracked through, while commoners don’t know if they’ll ever be boarded or seated, let alone served.”

AG Venugopal, in his consent letter, further mentioned a morphed image of the Supreme Court—the building coloured saffron with a BJP flag having replaced the tricolour—that was tweeted by Kamra.

He stated that this is a “gross insinuation” against the Supreme Court that it is “not an independent and impartial institution and so too its judges, but on the other hand is a Court of the ruling party, the BJP, existing for the BJPs benefit.” “All this in my opinion constitutes criminal contempt of court,” he added.

The Attorney-General further wrote, “I find that today people believe that they can boldly and brazenly condemn the Supreme Court of India and its judges by exercising what they believe is their freedom of speech,” further adding that under the Constitution, freedom of speech is subject to the law of contempt and people must understand that unjustifiably and brazenly attacking the apex court will attract punishment under Contempt of Courts Act, 1972.

Meanwhile, Kamra, in his statement, wrote that at the moment the Supreme Court had not declared his tweets as contempt of court, “but if and when they do I hope they can have a small laugh…” 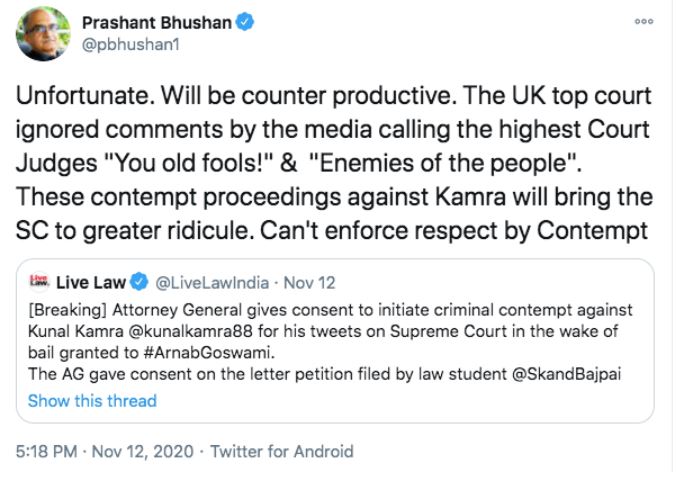 “These contempt proceedings against Kamra will bring the SC to greater ridicule. Can’t enforce respect by Contempt,” Bhushan tweeted. 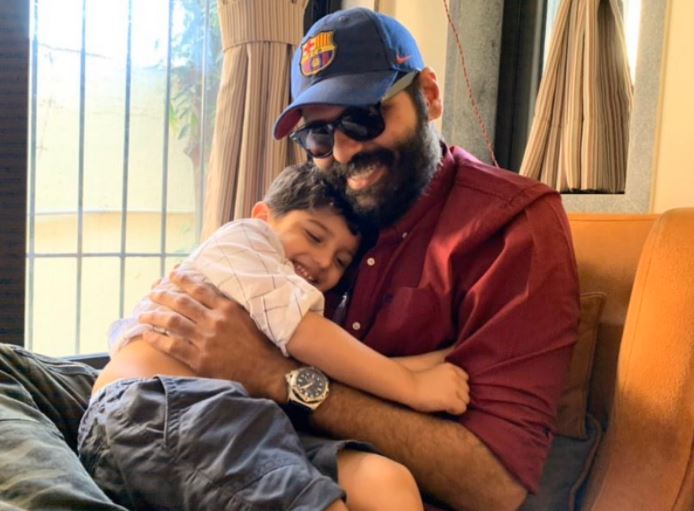