Qalandars of Tonk Scrape a Living in Empty Streets

Some livelihoods depend on crowds

TONK: “Last year I went to various cities and villages in Assam, Uttar Pradesh, Punjab, Haryana and Maharashtra. I travelled for nine months of the year selling ayurvedic medicine to train passengers and passersby. This whole year has gone in the lockdown and I have no other source of livelihood,” says Ibrahim Qalander, a salesman who is stuck in his basti.

The Qalandar basti in Tonk, Rajasthan has an unusual number of people for this time of the year. The pandemic has all but severed the livelihoods of these artisans, who cannot work from home. Salesmen and artists who rely on crowded spaces have been hit the hardest.

Qalandars are a nomadic community most of whom who live in parts of Rajasthan and Uttar Pradesh. They say they are descendants of Bu Ali Shah Qalandar, a Sufi pir from Panipat, Haryana who lived in the thirteenth century.

Known in Mughal times for breeding and keeping horses, they later began travelling from place to place showcasing circus performances with performing monkeys and bears.

Different groups among the larger qaum or community of Qalandars and Madaris each had monopoly over distinct routes extending across vast regions of the south Asian subcontinent.

Meeting once a year for the purpose of marriages, mourning deaths, and dispute settlement, most Qalandar families lived without a permanent residence until the 1990s.

Nur Muhammed, who travelled through many parts of the country with his bear, laments that “with the Indian Wildlife Protection Act, it was first Maneka Gandhi who tried to make us give up our bears, and then various NGOs. Over time we left our bears and settled down.” 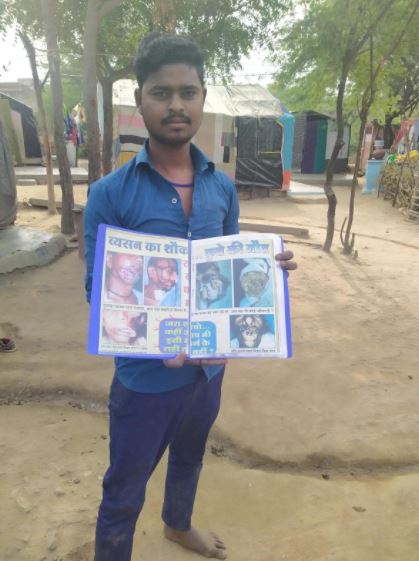 Before the pandemic, the Qalandars of Tonk still relied on nomadic mobility for their livelihood through selling wares on the roadside, railways and village fairs. “Ghat ghat ka paani humne zamano se piya hai” says Nur Muhammed – For ages we have drunk water from different parts of the country.

They would work the streets by gathering a crowd with catchy phrases that are called ‘bol bachan’ while the act of gathering a crowd is called ‘bayan’. It is skilled work as a good Qalandar is considered able to gather crowds of up to 100-200 people at a time.

Their earnings fluctuate: one may suddenly sell everything they have and earn enough for many days.

They would use phrases such as “Ram kaho ya Rahim, Kishan kaho ya Kareem, Allah Ishwar ek Naam” to gather crowds – Call it Ram or Rahim, Kishan or Karim, Allah and Ishwar are one name.

For the past few years Ibrahim Qalandar has been selling homemade de-addiction remedies. He relies on crowded marketplaces, where he repeats phrases he has coined or others passed to him by his elders. 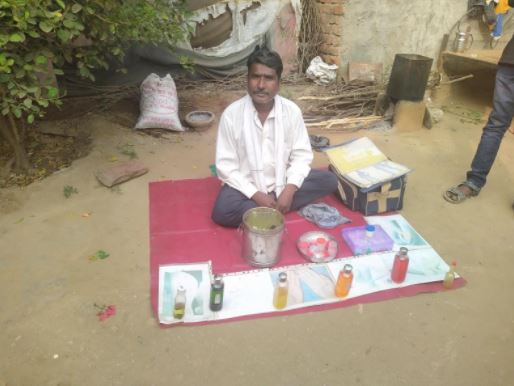 His uncle Ghulam has in front of him a gelid green liquid in a huge container, with a range of colorful oils in front and printouts describing different rashes and diseases.

“This is not an ice-cream to eat, this is a medicine to put on your body. This is ayurveda malum! and I have made it with my hands. This medicine can cure your wounds, rashes, ointment and any area where there is pain,” he says.

Ghulam Qalander would travel to Bengal and Assam living in dharamshalas and hostels while selling his products in crowded places, and would come back home for two months of the year.

Now however, tracing their old routes appears daunting as they have to face unwelcome public spaces with police forces deployed and the threat of the virus.

Faced with dwindling savings and an unknown future for street magic shows or sales, Nur Muhammed calls the coronavirus pandemic “the second blow to the Qalandar community” after they surrendered their dancing bears in the 1990s.

Neither Ibrahim nor Ghulam has heard of the micro-credit scheme for street vendors launched by the Union government to extend debt during the lockdown. They have never been eligible to join street vendors’ associations because of their nomadic mobility.

Nor have they heard of the assistance reportedly being given to folk artists by the government of Rajasthan – a cash prize of Rs 2,500 for those who send in performance videos it likes.

As salesmen they are considered not to be artists, and find themselves slipping through the cracks of even these inadequate government programmes.