Nearly 178 years ago, Africa was called the Dark Continent by Europeans living in dark about the continent with little or no knowledge about its people or geography.

Dr Livingstone is a live subject. Since his death on May 1 1873, hardly a week passes when something or the other about him is not being researched. In one such exploration I found his very brief connection with Mumbai, then Bombay.

What really is newsworthy is that some Bombay Africans greatly helped him in his last voyage to Africa from India. It was one such Bombay African who carried Dr Livingstone’s body to London all the way from Africa, past seas, rivers and mountains.

Before we move further, let us apprise ourselves with some Bombay Africans: Jacob Wainwright who once was a slave, the strange sort of newspaper reporter named Henry Morton Stanley, and Lady Nyasa, who were integrally associated with Dr Livingstone.

Among these names, Stanley was the only person who had no Bombay connection. Each of them has stories to tell that really are far more interesting than action packed thrillers.

Lady Nyasa was a small ship named after Lake Nyasa nestled in Malawi, eastern Africa that was “discovered” by Dr Livingstone. He built that ship emptying whatever he had earned from the royalties from his books on Africa.

Call it very strange, though built only to float in inland water and basically very weak, the Lady Nyasa reached Bombay after a four month long journey during which the ship encountered massive storms yet made it to Bombay.

In Bombay, Dr Livingstone sold it.

Then a very bad thing happened. The Bombay bank in which Dr Livingstone deposited all the money of the sales proceedings failed, leaving him without any cash.

I came upon Dr Livingstone, Lady Nyasa, Stanley and Wainwright while researching on Bombay Africans. In fact, my first target was to write on this subject about which hardly anybody knows.

I changed my topic from Bombay Africans to explaining these characters.

The primary reason is that hardly anybody in India knows of Dr Livingstone’s last voyage from Bombay, or that the man who travelled an incredible 29,000 miles through a third of Africa in a span of 30 years, once lived in this town.

Besides, Wainwright who brought Dr Livingstone’s mortal remains to London from Africa also lived in Bombay.

But how did he come to be there?

In the 19th century, hundreds of African slaves lived in Bombay and Nashik. One of them was Jacob Wainwright, born around 1849 as Yamuza in the Yao tribe living near Lake Malawi.

About the newspaper reporter Stanley, it is really interesting to know that his life was no less than a slave’s like Wainwright in his childhood. He perfectly fits in the characters of the exploited little souls of the Industrial Revolution-era England that we find in the books of Charles Dickens.

Stanley really was a character out of the pages of David Copperfield or Oliver Twist. He too was brought up in a “poorhouse” like the many that lay all over England, Scotland and Ireland in the 19th century.

Here, orphans or extremely poor boys would be admitted to be exploited and tortured to their bones. In the Victorian era literature we often find those horrible pictures. Stanley too was one such a boy!

And one day, he decided to tolerate it no more. He rebelled! And escaped and not before injuring his tormentor.

The Bombay Africans, like Wainwright, were captured by the slave traders but rescued by a British Royal Naval ship from the waters of the Arabian Sea near Bombay. Like Wainwright they were handed over to the Church Missionary Society School of Bombay.

Some, like Wainwright, were also taken to the African Asylum at Nashik.

Dr Livingstone hired him with a few more Bombay Africans for his final journey to Africa. Wainwright then was only 15.

We still have Wainwright’s handwritten diary about Dr Livingstone kept at the David Livingstone Birthplace Museum in Blantyre, Scotland. This diary now has been digitised.

Wainwright lived in England for few years and returned to Tanzania where he died in 1892.

Dr Livingstone made it his life’s goal to find it. In the process, he once was nearly killed on being attacked by a lion. He suffered a permanent injury to his person.

A lot of what we know about Africa today is because of him. Before him, much of the world had only vague ideas about vast Africa, its people, their customs, flora, fauna, lakes, land routes and mountains. He chronicled them all. 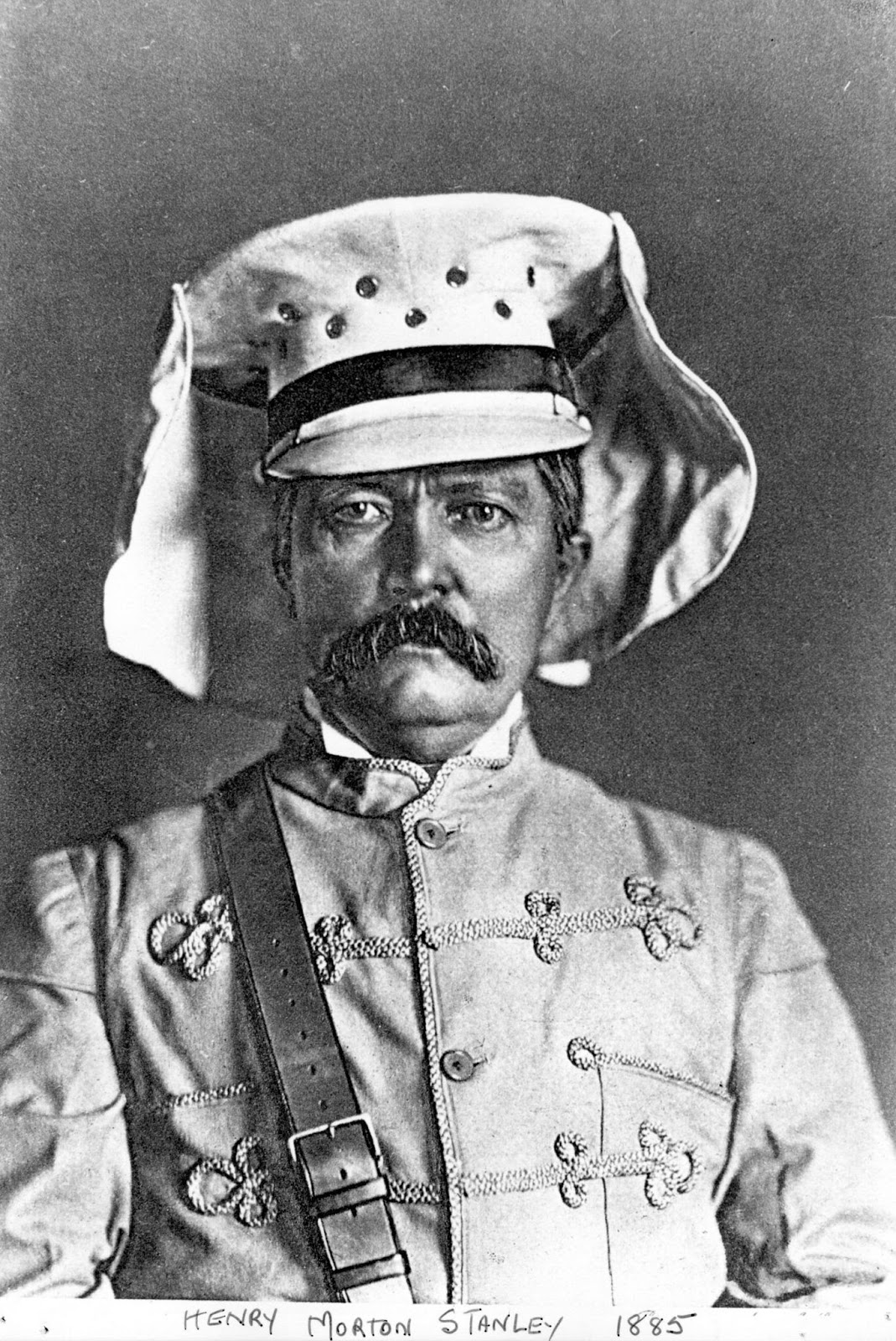 Let us now focus on his Bombay connection.

A sunny Bombay day on June 13, 1864 saw Dr Livingstone disembark from the Lady Nyasa at Colaba.

At that time, the Governor of the Bombay Presidency was Sir Bartle Frere. Sir Bartle was also President of the Royal Geographical Society which had a very close connection with the good doctor.

He suggested that Dr Livingstone launch his fresh African exploration mission with a few Bombay Africans. The explorer agreed. And they left for Africa.

In my efforts to find details of Dr Livingstone’s days in Bombay, I finally landed at Kala Ghora, near Fort in Mumbai. Here, I learnt that Dr Livingstone had planted a mahogany tree which still survives (or maybe a child of the original tree).

That mahogany sapling was planted by Dr Livingstone at the request of Sir Bartle.

Stanley perhaps is the only reporter in the entire newspaper world – past till present – who is totally different from the others. But how?

He was a war correspondent and the only reporter ever to be officially commissioned to the task of finding an explorer: Dr Livingstone. That task was given by a newspaper.

That was the time when the circulation war among newspapers in America had reached its apex. Every paper wanted exclusive news stories blended with sensations, twists and turns. And what could be more sensational than locating a globally known explorer who is supposed to be dead deep inside some jungles in Africa?

Stanley is also the only recorded turncoat soldier of the US Civil War who turned newspaper reporter.

A very interesting fact about Dr Livingstone is that, like him, all those closely associated with him also had extraordinary, strange lives be it Wainwright or Stanley.

Take frail Lady Nyasa! It remains a mystery how could she sail from the African shores to Bombay facing a series of typhoons? Regular researches still are continuing on Lady Nyasa.

Can you imagine, Lady Nyasa was built to float only on rivers yet she made it successfully through the turbulent waters of seas?

Now coming to Stanley, we find that he indeed is a thrilling book wrapped in human form. How? That we will examine now, to wonder at a wandering reporter’s adventures which are all recorded.

In one life, he played many roles, so many roles, yes. That was our Henry Morton Stanley, reporter for the New York Herald that exists no more.

Born in 1841 as John Rowlands in Wales in the UK, how he assumed his new name is quite interesting to which we will come later.

First let us focus on his childhood’s misery. He was abandoned soon after his birth by his mother Elizabeth Parry. Born out of wedlock, he lost his father when he was just a few weeks old.

Worst of all, his mother ended all relationship with the little baby and never communicated with him.

A page from the Manuscript of Missionary Travels and Researches in South Africa (Part III), January-October 1857, by David Livingstone. Copyright National Library of Scotland.

He was brought up by relatives. As a little boy, Stanley was sent to a poorhouse. Fed up with the tortures, he escaped from there to migrate to the United States in 1859.

He was 18 when his American Odyssey began from the city of New Orleans with a change of name. How it happened also is quite interesting.

“Do you need a boy, sir?” our young man, in his search for a job, asked Henry Hope Stanley, a trader of New Orleans. Childless and a very kind man, he offered him a job. He was more of a father than an employer to him. But he died in just two years.

Stanley then adopted his name adding an additional word Morton. He then became Henry Morton Stanley.

That was a turbulent time for America. The Civil War had just begun between the Confederates and the Unionists nominally over the issue of abolishing slavery. Stanley joined the Confederate Army which supported slavery. In the Battle of Shiloh in 1862 he was taken prisoner.

Soon he turned turncoat to join the Union Army which supported abolition. That historic turncoat-event took place on June 4 1862. Just two years later, he joined the Union Navy. While on board the USS Minnesota he started working as a freelance journalist.

Very interestingly, Stanley probably was the only man to serve in the Confederate Army, the Union Army, and the Union Navy.

Stanley joined the New York Herald as a Special Correspondent. He worked on conflict reporting assignments covering the Battle of Magdala in 1868 followed by another war in 1868 raging in Spain, known as Spain’s Glorious Revolution.

Soon he established himself in war reporting. His style was different from others and that made him very popular as a war correspondent.

After some time, Stanley got a rather strange sort of assignment from James Gordon Bennett Jr., publisher of the New York Herald.

It was to locate Dr Livingstone in Africa. Nobody knew where he was. Whether surviving or dead following attacks by savages or eaten by the African lions?

Procession of body of Dr Livingstone before being buried

Stanley did find him, but could not bring him back to English civilisation. His body, however, was brought back to London after being embalmed, by our Bombay African Wainwright.

Stanley set sail and reached Zanzibar. He knew not whom to ask about a “White Man” living deep inside the jungle. He was tasked with bringing Dr Livingstone if he was alive. To the world he was dead. But he was also a very big celebrity.

Stanley ultimately did find Dr Livingstone, on November 10 1871 at Ujiji, near Lake Tanganyika in today’s Tanzania. His African guide Susi led him deep inside the jungle to a hut where he had found a White Man.

Susi shouted “An Englishman coming! I see him!”

Stanley approached the hut and saw him. He uttered a few words that have become part of the history: “Doctor Livingstone, I presume?”