JJP under pressure to withdraw support

There is panic amongst the legislators in Haryana, with the Manohar Lal Khattar government directly feeling the heat of the farmers' agitation. Unsure of their political future as the farmers in the state take to the streets, the ruling party MLAs in the state are not confident of going into the field these days.

According to a senior Jat leader in the state,”ministers have been advised not to tour in Haryana at least for the next two months.”

Although the BJP retained power for a second consecutive term with the help of Jannayak Janata Party led by deputy chief minister Dushyant Chautala the latter is finding it difficult to retain his party’s nine MLAs who are worried about the impact of the farmers agitation on their constituents.

INLD’s Abhay Chautala resigned a few days back on the farmers issues and against the three controversial laws. This is the first time in 25 years that INLD is not represented in the Haryana Assembly. He is the younger son of former chief minister Om prakash Chautala and clearly still willing to carry the baton of agrarian rights. The Chautala family, once powerful amongst the Jat farmer community, has split itself with family feuds and squabbles. Abhay Chautala was the only INLD leader who was able to win his seat in the 2019 Assembly elections, a far cry from the 19 seats it had secured in 2014 at the height of the Narendra Modi ‘wave.’

Haryana BJP leaders are still optimistic that the deputy CM Dushyant Chautala will be able to ride over this storm, many are critical of the central mismanagement of the issue that has made the party irrelevant in Punjab, damaged its strong base in western Uttar Pradesh, and made the state government “unstable” in Haryana.

“ Modiji has never faced agitations during his stint as Gujarat chief minister and now as the prime minister…winning elections and running governments are two different things, that require different mindsets .Besides, the BJP does not have a credible Kisan face who can convince the protesting farmers,” Haryana Jat leaders pointed out on condition of anonymity.

However, despite its minority status the state government continues to hang on to power with so far no split in the ranks of the NDA. The JJP is feeling the pressure, as its legislators had won on the direct support of the farmers. At least two party MLAs, according to media reports from the state, had supported the protesting farmers against the bills just this week.

Dushyant Chautala had also been compelled to speak out against police action on farmers in Kurukshetra. It is becoming increasingly difficult for the JJP to stay in power, according to the sources, but so far it has kept in the alliance and averted a split in its ranks. The alliance members are finding it difficult already to visit the villages, with the farmers refusing to entertain them. Black flags are being shown to the state leaders, their vehicles gheraoed by angry farmers raising anti BJP-JJP slogans.

More recently the massive khap mahapanchayat in village Kandela in Jind district has decided along with others across Haryana to boycott the BJP-JJP leaders. And at the same time pressure the JJP to withdraw its support to the BJP. If it does pull out this could bring down the Khattar government that is clearly dependent now on Dushyant Chautala and his legislators.

To alleviate some of the pressure the deputy CM announced in December last year that he would resign if the Minimum Support Price was withdrawn. But this did not convince the farmers who have been demanding the repeal of the three controversial farm laws. The social boycott announced at the Jind mahapanchayat is coming into force, according to Tekram Kandela, president of Kandela Khap, as quoted in sections of the media. He said that the JJP needs to prove its support to the farmers otherwise like their parent INLD party they too will ‘vanish’. 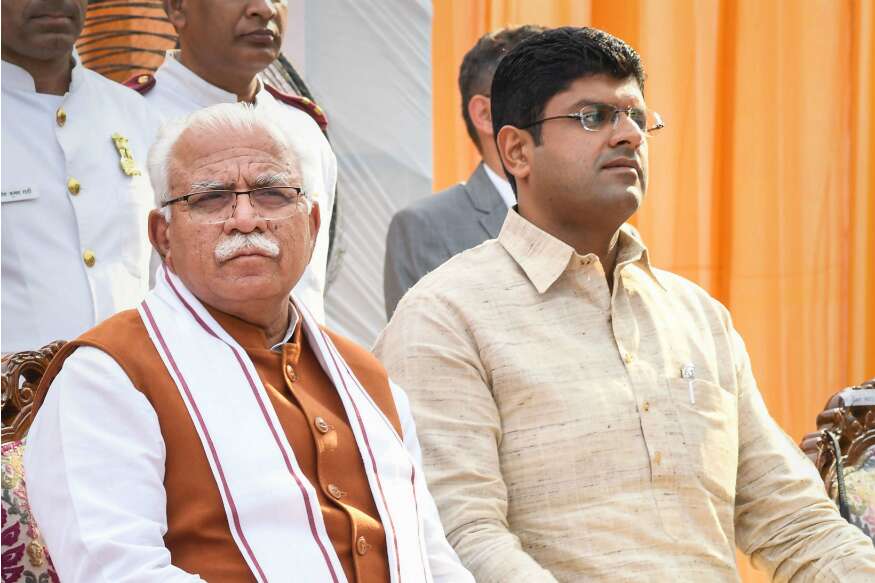