A few days ago, a manual scavenger in Mysuru committed suicide because he was being harassed by his bosses for five months and was not even paid his salary. He left behind a suicide note stating that he was forced to enter a manhole to clean it without safety gear or even a pair of gloves.

He felt severely humiliated because these bosses made him put his thumb impression on a paper which stated that he had stepped into the manhole without protective gear of his own volition.

How could this be true? Is it not the duty of the superiors that a manual worker or safai karmachari step into the manhole wearing protective gear which is compulsory?

Four of seven labourers were killed when they were trapped inside an under-construction manhole at Purba Putiary Pump house near Aikyatan club in Kolkata, West Bengal a few days ago.

A total of seven workers were rescued from the manhole. Two of the labourers were rushed to SSKM Hospital where they were declared brought dead. While two others were declared dead at Baghajatin State General Hospital, according to a report in Indian Express. Three other workers have received injuries and are being treated at Baghajatin State General Hospital.

Is this not tantamount to murder?

According to a Human Rights Watch Report, (Cleaning Human Waste: “Manual Scavenging,” Caste, and Discrimination in India, August 2014), on September 6, 2013, the Indian Parliament passed The Prohibition of Employment as Manual Scavengers and Their Rehabilitation Act, 2013 (the 2013 Act), committing itself yet again to ending manual scavenging.

The government’s recognition in the 2013 Act of the historically rooted and ongoing injustice faced by communities engaged in manual scavenging is important, but also points to failures in implementing previous laws and policies to address the problem.

Recent examples from communities engaged in manual scavenging in the states of Gujarat, Madhya Pradesh, Maharashtra, Rajasthan, and Uttar Pradesh highlight the failures of previous government attempts to end manual scavenging and eliminate the entrenched attitudes and discriminatory practices that still bind members of affected communities to this degrading and unnecessary occupation.

“As per the Act, these manholes should not be cleaned manually; these should be cleaned only with machines. If a person is cleaning the same, he should be provided all the safety equipment. But the authorities do not do so which is illegal,” said B R Tisawarah, president of Chandigarh Dalit Welfare Association.

For a mere amount of Rs 300 for cleaning a manhole, these men and women have been putting their lives at risk. “A poor illiterate man does not know that if a contractor is asking him to go down and clean the manhole, he should be given safety gear. Is it not the duty of the officer concerned to provide the safety gear? At least the officer is educated,” said Sukhram Chauhan, general secretary of Chandigarh Dalit Welfare Association.

On May 27, 2016, IndiaSpend stated: “As many as 12,226 manual scavengers were identified across India—82% of these are in Uttar Pradesh—according to a reply to the Rajya Sabha (Parliament’s upper house) on May 5, 2016, by Minister of State for Social Justice Vijay Sampla. These are under-stated official figures. The persistence of manual scavenging is linked to the Hindu caste system, with about 1.3 million Dalits, mostly women, make a living as manual scavengers across India.”

However, lack of education is not always the reason for pushing them into inhuman work. The panchayat in Nhavi village in Maharashtra’s Jalgaon district hired nine women and men to manually clean open defecation sites. Bimal told Human Rights Watch that she does not want to clean excrement, but has continued to do so because she fears her family will be thrown out of the home where she lives. Bimal’s husband, Kailash, has a college education, but began manually cleaning toilets for want of work as no work place with upper caste workers would have him as co-worker, subordinate or boss. Is this not a crime?

He got himself a job as manual scavenger in Nhavi in 1989 when he was unable to find alternate employment. He said, “I studied commerce and banking, but I couldn’t find work. Even though I am educated, the panchayat hired me to clean toilets because I am from this community.”

Among the caste and sub-castes categorised as “manual scavengers” Valmiki, is the caste that lives widely in Madhya Pradesh, Uttar Pradesh, and Rajasthan, Han and Hadi in Bengal, Balmiki Dhanuk, and Halalkhor in Uttar Pradesh, Mehar in Assam, Mehatar in Hyderabad and Maharashtra, Paki in coastal Andhra Pradesh, Thotti in Tamil Nadu, Mira, Lalbegi, Chura, and Balashahi in Punjab, and Balmiki, Mehatar, and Chuhra in Delhi. (Gita Ramaswamy, India Stinking: Manual Scavengers in Andhra Pradesh and their work, Delhi: Navayana Publishing, 2005, p. 3)

But this is not about statistics or about the sub-castes categorised as Valmikis or Hadis. It is more importantly about the children of such families bearing the brunt of what occupation their parents are engaged in. This problem is multiplied because many parents hide the reality of their occupation from their children who get to know it from the way the mainstream treat them – at school, on the playground, at shops and libraries where they are shunned and treated very badly.

Vinod Kamble, who began his life as a manual scavenger himself and later succeeded in graduating from the FTII, Pune, has made a film on two boys of who, one is forced to help his father in manual scavenging though he loves to go to school. The name of the film is Kastoori in Hindi which has already been praised at national film festivals.

“The film is inspired by the true story of Sunny Chavan, a young boy who assisted his father in conducting post mortems and found the experience quite disgusting but he had no choice. Sunny began doing post mortems from the time he was in the 8th standard. I read about this boy in a newspaper and he reminded me of my own childhood. I began helping my father who was a manual scavenger from the time I was in the 5th standard. I also helped my grandmother in her duties as a scavenger. As a growing child, I could not do anything about the very bad deal I got from people and so, I identified with the tragedy of Sunny’s boyhood and decided to make this film,” says Kamble. The film focuses on how the boy is disgusted with the bad smell of his body and seeks kastoori through every mean to get that smell off his body.

Bezwada Wilson, of Karnataka, did not know that he belonged to a low caste because his parents kept it hidden from him. When he learnt the truth, he felt like committing suicide. (Sonali Acharjee, India Today, December 26, 2020). But he did not and decided to do something about his people and he is doing it right now.

He did not even know what the word bhangi meant when, at ten, someone threw the word at him. It changed the direction of his life forever. Wilson committed himself to a long journey to eradicate the scourge of manual scavenging and liberate his caste brethren from the indignity of the profession.

In 2016, Wilson won the Magsaysay award for his contribution to the cause. The number of manual scavengers has come down from 1.5 million in 1996 to around 54,000 in 2019. But India needs hundreds of Wilsons to eradicate this illegal practice forever, where humans are forced to manually clean the waste of fellow humans.

How inhuman can one get? Isn’t India is the biggest democracy in the world? Think about it. This is not just inhuman. It is a crime. 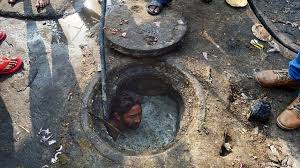