Donyi and Polo, the sun and the moon

On the front facing wall of the balcony of Tajom Tasung’s traditional Adi bamboo house, built on stilts, hang photos representing some primordial deities revered by people of the indigenous community of Arunachal Pradesh.

The first is of Daadi Boté, deity of domestic animals, a traditional sign of wealth.

Next is Doying Boté, who Tasung says is responsible for human knowledge and administration.

Tasung, who is president of the Indigenous Faith & Cultural Society of Arunachal Pradesh, says Doying Boté’s blessings are important for those who want to take on leadership roles.

In the middle is a pictorial representation of Donyi and Polo, the sun and moon.

Beside it hang two pictures of Kine Nané, an earth goddess whose blessings are sought during the agricultural festival of Solung celebrated annually in September.

Until a few decades ago such iconography did not exist. The first seeds instituting what is now called the ‘Donyi-Polo’ faith were sown in August 1968, when members of the Adi and Galo tribes met in Aalo, the district headquarters of West Siang, and decided to build a Donyi Polo Dere, or community hall.

But the movement to revolutionise an ancient belief system, in order to ‘preserve’ it from other major world religions, only began in earnest with the work of the late Talom Rukbo.

Spread across a landmass bigger than Jharkhand and with a population of some 1.2 million in 2011, Arunachal Pradesh is officially home to 26 ‘major’ tribes and over 100 subtribes, almost all of whom have traditionally spoken languages classified in the Tibeto-Burman and Kra-Dai language families. 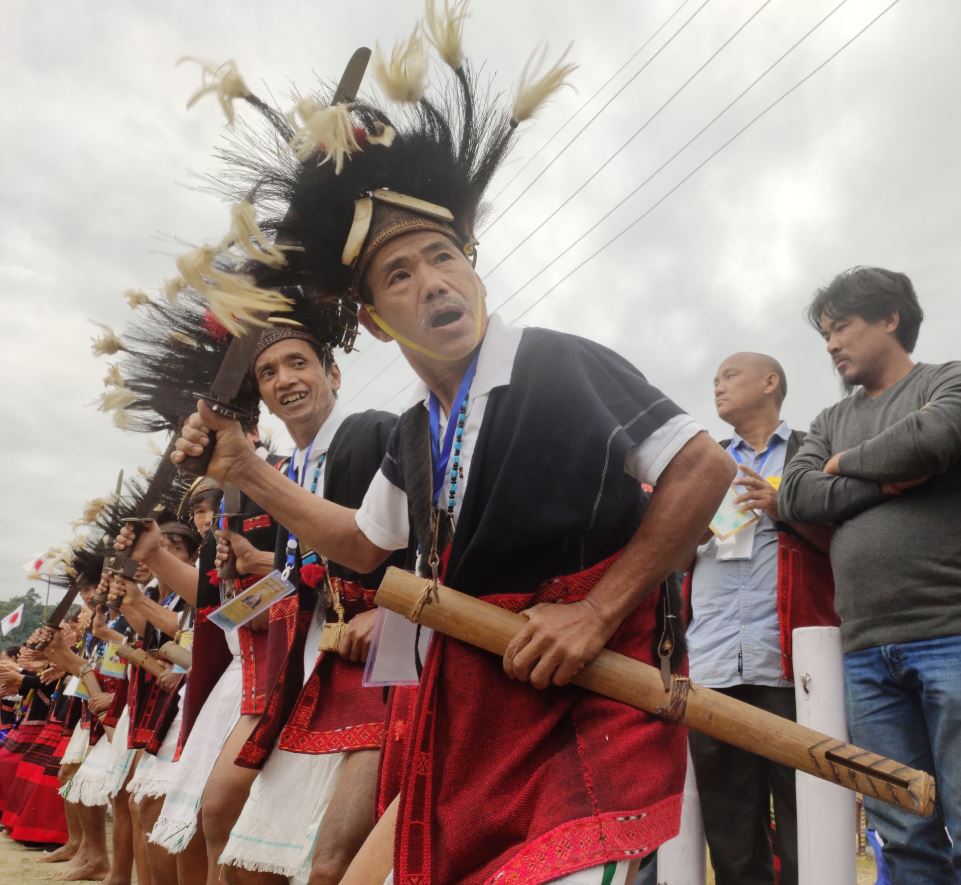 These indigenous tribes’ language families also offer a window into their systems of belief.

To the west are tribes like the Monpa and Sherdukpen, who primarily follow a form of Tibetan Buddhism, while in the east are Khamptis and Singphos who have traditionally practised the Theravada Buddhism prevalent in southeast Asia.

To the extreme south east are tribes known to the Constitution as ‘Naga’ tribes, with their own beliefs.

A large section of the central part of the state is home to the three major Mishmi groups, who have also traditionally practised their own faith.

The single largest bloc, by population, lives in the central belt: the ‘Tani’ group of tribes, which include the Adi, Apatani, Galo, Nyishi and Tagin of the state, apart from a large number of Mishings, most of whom live in neighbouring Assam.

Although collectively referred to as the Tani, the communities have clear distinctions. Their cultural and linguistic similarities are visibly evident too. The thread that binds them is that traditionally they have traced their lineage to a common ancestor called Abotani, which literally means father-man.

Bordered by Bhutan in the west, Tibet in the north and Myanmar to the southeast, the state’s multitude of religious and cultural beliefs reflect its ancient links to its neighbours, more than the nation it is now part of.

It all changed in 1947, when the British abruptly upped and left, and suddenly, indigenous tribal people who had independently lived their lives for centuries learnt that they were now part of a new nation and state.

Christian missionaries began making concrete inroads in the tribal communities of the state only after independence – unlike in the tribal belts of Manipur, Meghalaya, Mizoram and Nagaland, where US and British missionaries had already established several church denominations since the late nineteenth century.

By 1968, when the Adi and Galo tribesmen held their crucial meeting, Christian missionary work had begun.

One of the men part of that meeting was the late Talom Rukbo, a founding member of the Donyi Polo Yelam Kebang or DPYK – yelam meaning belief, and kebang that can be translated in a variety of ways, including ‘a gathering of people’ and also an ancient form of tribal council.

An Adi who graduated from St Edmund’s College in Shillong, Meghalaya in 1960, Rukbo joined the state government and was appointed Language Officer by the administration. He held various other positions before seeking early retirement in 1972, when he dove headfirst into activism.

Along with his friend Arek Megu, Rukbo would go on to establish several key institutions of the Donyi Polo faith, which have acted as the movement’s guiding principles over the years.

Around this time in 1978, the state government introduced the Arunachal Pradesh Freedom of Religion Act aimed at countering proselytisation. (The BJP government here has since said it is looking to repeal the Act.)

By the mid 1980s, Rukbo was attending conferences organised by the International Association for Religious Freedom (IARF) founded in Boston in 1900, and had set in motion the ideas that would establish the DPYK in 1986.

A year before, with his spiritual successor Kaling Borang he attended an IARF conference in New Delhi.

Borang later told Rukbo that a written script of the Adi spoken language must be developed for the Donyi Polo faith to be recognised as a religion.

Hence, the DPYK was officially formed on 31 December 1986, a day now celebrated as Donyi Polo Day.

What began as an idea to put in writing what was traditionally passed down in oral forms, has now transformed in unimaginable ways.

On 1 December 2019, Pasighat in the East Siang district was the venue of a ‘bhumi pujan’ (site blessing) for the Donyi Polo Khumko.

Pai Dawe, president of the Nyishi Indigenous Faith and Cultural Society, said then that the Indigenous Faith Day was being celebrated by laying the foundation for a large prayer centre for believers of the Donyi Polo faith.

He explained that ‘khum’ means prayer and ‘ko’ means place.

This he said was not an alien concept, and that traditionally the people of his tribe, the Nyishi, would also hold a similar ritual when constructing a new bamboo stilt house.

“In Nyishi, we refer to the ritual as Namdi Dinam, where ponye (millet) and takhe (ginger) are wrapped in the leaves of the Toko plant (Livistona jenkinsiana or Major Jenkins’ fan palm, colloquially named the fan tree) which is tied around the main pillar (called manglo gya in Nyishi and gii-áng in Adi) around which the house is built,” he said.

More than a year back when the event was first announced, it drew criticism on social media for its apparent ‘Hinduisation’, especially for being called a ‘bhumi pujan’ ceremony.

The event organisers, however, argued the Hindi name was chosen since the ritual of laying the central pillar is referred to differently in different languages, and they wanted to find a common ground.

Dawe is the first to admit that the Tani tribes have never had a single place of worship.

Being an ‘animist’ belief system, the faith was focused on prayers and rituals that could be held whenever it was felt a family or village needed to appease the spirits surrounding them. Weekly gatherings for prayers at churches, mosques, or temples were never imposed or required.

In fact, a tribal shaman called a miri and/or nyibu selects the auspicious day to hold a ritual, after he or she finds auspicious signs in the liver and innards of a chicken.

This system, called haruspicy or hepatoscopy in English, has been in practice for ages, even amongst the ancient Greeks and Romans.

At any other ‘bhumi pujan’, such as held that December morning in Pasighat, a chicken would have been sacrificed and its blood smeared on the central bamboo pillar.

But on this particular day, no such sacrifice took place.

Several people, who did not want to be named, said this was because there were people visiting from outside the state, who may have been uncomfortable with that aspect of the ritual.

Those people from outside the state was a veiled reference to members of the right wing Rashtriya Swayamsevak Sangh, which describes itself as a ‘unique social organisation dedicated to India’s resurgence and global peace’, and of the Vishwa Hindu Parishad.

While neither organisation is officially linked to the Bharatiya Janata Party currently in government at the state and in New Delhi, they are known to be aligned to it.

A number of people in Arunachal Pradesh who are part of this new form of the Donyi Polo faith are also members of the RSS. 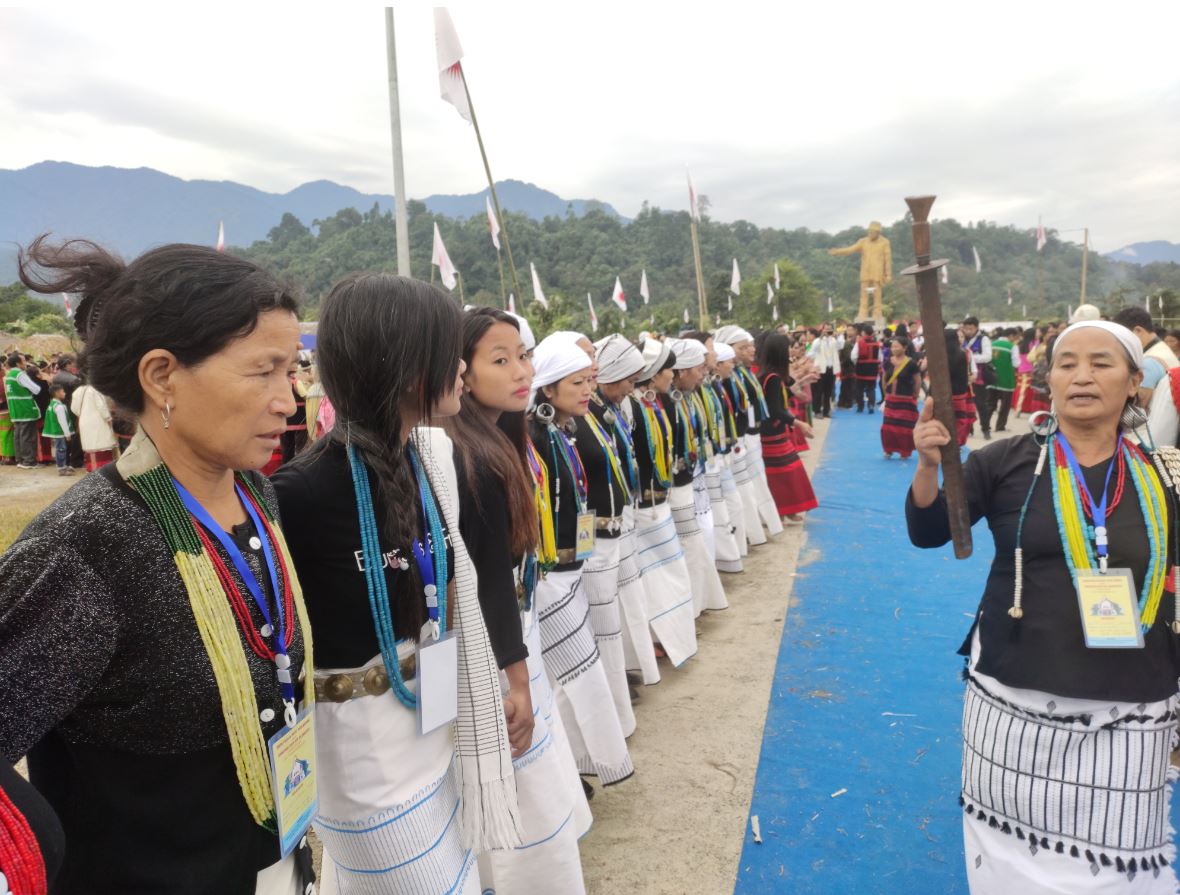