‘The whole process is faceless’

As the managing director of CropData Sachin Suri explained to Microsoft’s news desk last year, the abstract looking artwork behind him is not a painting. “This is actually a spectral analysis satellite image of farms. Each tiny spot, or a geo-spatial tile, is an actual field in Punjab and the different colors denote the stress levels in individual farms.”

That frame is the crux of what CropData, a Microsoft partner, and by extension the Union agriculture ministry’s new data aggregation scheme is all about.

The Nagpur agritech startup uses data collected from farms across the country to create ‘post harvest solutions’ for farmers: an online marketplace to connect them with corporate buyers, algorithm modules to help banks extend them credit, and a digitised supply chain intended to improve ‘transparency’.

On April 14 the government signed a memorandum of understanding with Microsoft permitting CropData to work in 100 villages across ten districts in Rajasthan, Uttar Pradesh, Madhya Pradesh, Haryana, Gujarat and Andhra.

The MoU is unavailable in the public domain. But according to reports it could potentially give Microsoft access to a database of 5 crore farmers and their land records maintained by the government, with the possibility of more data being added to it.

The signing comes closely on the heels of a new project called ‘Agristack’, a platform the government says is meant to tackle long-standing agricultural problems such as low use of bank credit and wastage in agricultural supply chains.

Agristack will be based on Aadhar cards. Reportedly, every farmer in the country will be provided with a unique digital ID linked to their Aadhaar card. Information collected for the ID may include personal details, profiles of the land and produce, as well as financial records.

According to the Internet Freedom Foundation, Agristack, a brainchild of Niti Aayog can be traced to a February 2018 report by the agriculture ministry on ‘doubling farmers’ income’, which asserts many potential benefits to digitising the agriculture industry.

A few months later in June, NITI Aayog brought out another report, on the ‘national strategy for artificial intelligence’. This paper expounds on what digitisation may mean: an integrated database of information on farmers using data from the PM Kisan scheme, the soil health database, and information from the PMFBY crop insurer subsidy among other geo-taggable datasets.

Two years later the government pushed the Farmers’ Produce Trade and Commerce (Promotion and Facilitation) Act of 2020 through Parliament. Sections 4-2, 5, 7 and 17-2a of the law permit the Union government to set up an online network of farmers, traders, lenders, transporters and customers.

Farmers’ unions across India have said none of them were consulted about the project. 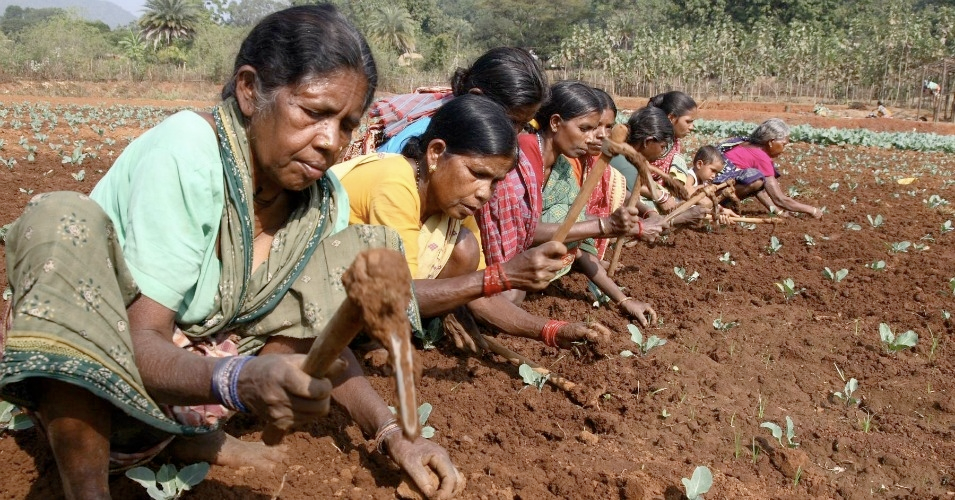 A data scientist at Accenture who worked with NITI Aayog on the national strategy for AI said on condition of anonymity that primary information is gathered by ground personnel through AI devices connected to the Microsoft network.

The data is then fed into a central database which churns out information such as “risk, cultivated crop, irrigated area, lot holding size and production values” to customers browsing the e-market.

“In the current system, data collection and government advisory generation happens at the district level, while subsidy and other welfare programmes are customised at the national level. This is because land holdings in our country are so small and so many that it is impossible to collect granular data,” the Accenture data scientist said.

“Without detailed data it becomes difficult for farmers to secure formal credit, and they fall prey to loan sharks. Then there are middle-men who obfuscate the supply chain and profit at the expense of the cultivator. These are the people who the Agristack initiative will be removing from the equation,” he said.

“Corporations are much more legally accountable than an individual,” he said.

At present, CropData has been charged with setting up the infrastructure for Agristack. One of the coloured dots in the spectral analyses on the walls of its Nagpur office is a two-hectare plot of land in the village of Atghar, near Banda, Uttar Pradesh.

It is owned by Siddharth Rana, 57, who confirmed that his plot had been subject to data collection.

“Panchayat people came with ‘scientists’. They took my phone number, Aadhar card number and asked me questions about my crops, how I farm, what prices I get, etc. They helped set up an account online. They also photographed the field from every angle.”

Rana said that while the new development has made the process of selling his crops much smoother, he has apprehensions regarding the system.

“First, the whole process is faceless. If something goes wrong, it will take dozens of phone calls to address my issues. Second, I don’t have as much negotiating power as I do in the market. There are many more factors at play during a physical negotiation than just ‘data’. In Covid times, I am okay with using the internet. But I hope this doesn’t mean the end of ‘normal mandi.’”

The 57-year-old cultivator is not the only one with misgivings about Agristack. A fortnight ago 55 farmer and civil rights collectives wrote a joint letter to Union agriculture minister Narendra Singh Tomar criticising the database and the government’s involving Microsoft. They object that these arrangements are being made without a nationwide policy on the privacy of farmers’ data and other related issues.

“The biggest concern is who gets to access the farmers’ data, and how central is farmer consent to the data sharing process,” says Rohin Garg, policy counsel at the Internet Freedom Foundation.

“Freely accessible data may lead to exploitation by large agribusiness and fintech companies, who may exploit farmers through prohibitive input costs, low prices and usurious loans. Now farmers must (and indeed want to) use the latest technology, which may necessitate some amount of data sharing. However, even this must happen on terms that benefit farmers, and they must be allowed complete control over what all data they share and who gets to process it,” said Garg.

The Personal Data Protection Bill 2019 in its present form requires any “data fiduciary” to gain people’s consent before collecting or using their personal data. People can also withdraw their consent and demand that all stored data be erased. However, the State exempts itself from these requirements if it’s using the data to provide “any service or benefit” to the individual.

The Bill has been under review by a Joint Parliamentary Committee since March last year. But as was the case with the UIDAI and Aadhar, data collection has begun. 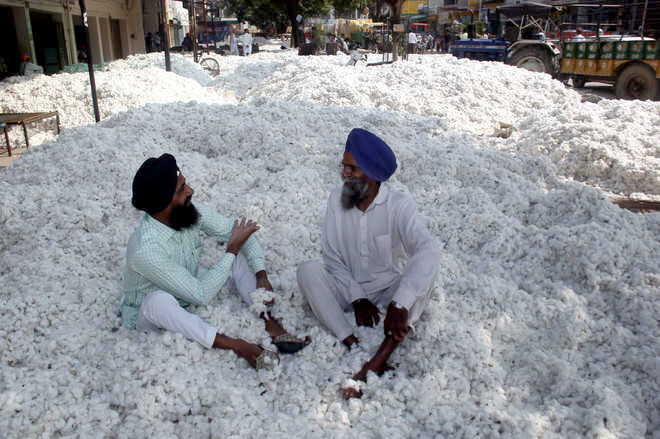 Another problem is the lack of representation on the committee overseeing Agristack. “These developments are taking place without consulting the primary stakeholders in this ecosysem, namely the farmers. The government must consult with farmers and other stakeholders to understand what they want, before proceeding further on Agristack,” says Nachiket Udupa, a member of the Mazdoor Kisan Shakti Sangathan.

As for “eliminating middlemen”, Udupa thinks the term sets out to demonise traders. “The trader plays the essential role of connecting the farmer with the end consumer. Certain things like processing and transport economically work out only at a certain scale, and will need some level of aggregation and capital investment.

“An online platform playing the role of person-in-the-middle only means that the online platform will replace the traditional trader or arhitya currently in that role. Even if exploitative, at least if there is a person who the farmer can approach as the ‘middleman’ then there is some scope to hold that person to account,” he says, echoing Rana’s concerns.

Meanwhile, Subhas Roy, an agribusiness lawyer practising at the Calcutta High Court, raises concerns about the online financial lending models that would rely on Agristack.

“The current model at CropData aggregates farmers based on their ‘score’ irrespective of the size of their holdings. While on paper it sounds great for smaller farmers, it might actually put them at a disadvantage.”

This is because those with high credit scores would have access to better bank loans and terms. But while a large landowner may be able to pay back large short-term principals with interest, a small landowner may find it difficult to do so, affecting their credit score, and pushing them into a debt trap.

“This could lead to the small farmer seeking loans from informal creditors, easy to find on the net, to pay back the banks. Illegal microfinance groups drove farmers to arhityas in the first place,” says Roy. 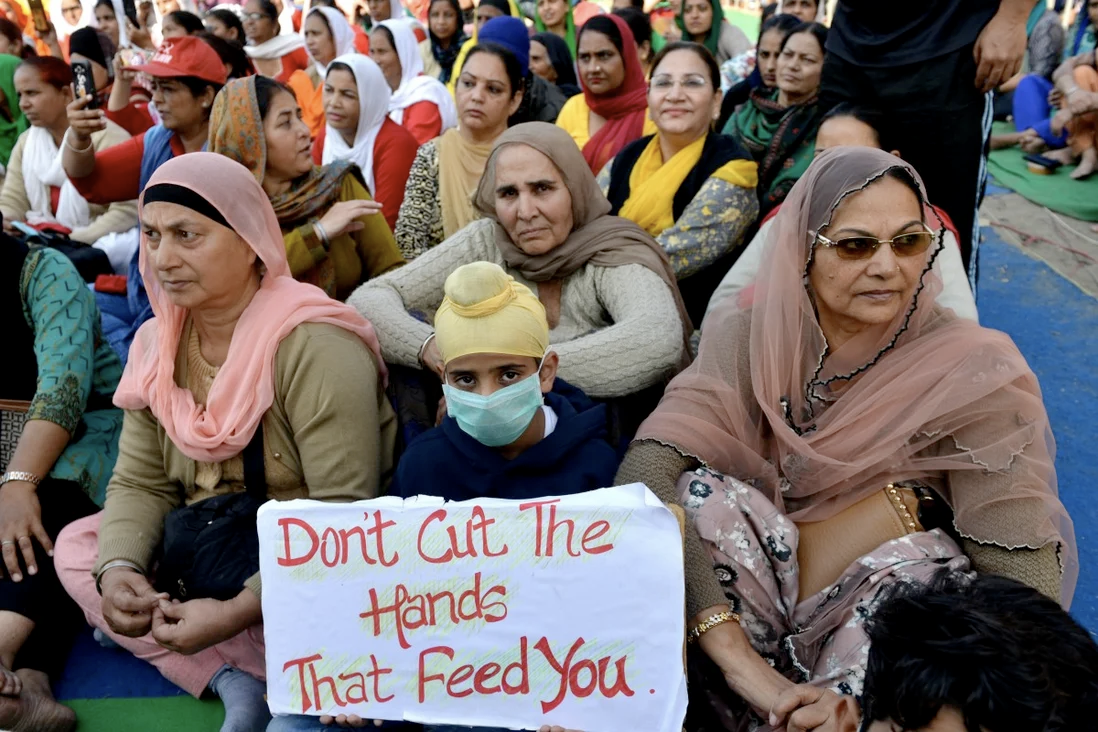 Concerns also persist about linking credit or market access and other benefits to the Aadhar database.

Despite Supreme Court orders to the contrary, government agencies continue to insist on Aadhar cards for crucial “benefits” such as people’s right to food.

In 2018 the CEO of the Unique Identification Authority of India himself noted that the rate of Aadhar authentication failure for government services is as high as 12%.

A December 2017 research paper on Aadhaar authentication for NREGA job cards, pensions, LPG subsidies, midday meals, the PDS and other public entitlements concluded that Aadhaar integration did not yield “any significant gains.” The researchers found that contrary to the advertised “one-time costs of enrolment and Aadhaar-seeding, people are now faced with higher transaction costs on a monthly basis (in pensions and the PDS for instance), and in a significant minority of cases, also face exclusion and denial.”

Another recent study of the Jharkhand PDS concluded that Aadhaar based authentication “either did not reduce errors of inclusion or leakage or did so at the cost of increased exclusion error”.

Besides Agristack, the NITI Aayog has also come up with a ‘National Health Stack’, a vision of unique health IDs that every Indian would require for access to an online insurance coverage and claims mechanism, as well as a “national health analytics platform”. In return a nationwide database of individual medical records would be created, purportedly for “medical research”.

Given Agristack’s tieup with Microsoft, and the many security lapses recorded in the Aadhar database, concerns about the commercial exploitation and leakage of people’s medical data have been raised about Healthstack as well.

In their joint letter on Agristack and Microsoft India, the 55 organisations have demanded consultations between farmers and their State on the direction of the digital push.

They say the agriculture ministry “should put out a policy document in this regard after giving due consideration to feedback from farmers and farmer organisations. As agriculture is a state subject, the central government should consult the state governments also.”