Kashmir politicians look for a political opening from the PM

All the Kashmiri political leaders who have been invited to meet Prime Minister Narendra Modi on Thursday will attend. They expect him to inform them how the political space is to be expanded in the erstwhile state of Jammu and Kashmir, and how and when statehood might be restored.

As politicians of course, they are keenly aware of how this entire process would be perceived by their supporters and prospective voters. They would thus, hope for something concrete to convey to their voters that would increase their popularity.

In fact, some leaders in Kashmir feel that it might have been better if the government had set the stage with some confidence building measures.

Speaking to this writer, Peoples Democratic Party President Mehbooba Mufti said that releasing political prisoners could have been a good step to build the atmosphere for talks.

Not just 'mainstream' politicians like the former chief minister, a well-placed member in the Hurriyat Conference grouping of separatists said that a number of political activists wanted to engage in talks, but needed something to 'sell’ to their supporters.

By stating at the outset that statehood would be restored, the government has deprived Kashmiri politicians of a point they might have scored with their supporters by saying they fought for and obtained the restoration of statehood, he observed.

After they received the invitations, Mehbooba Mufti had suggested that only a couple of representatives should attend the meeting on behalf of all the People’s Alliance for Gupkar Declaration (PAGD) member parties.

At Tuesday’s meeting, she suggested that Dr Farooq Abdullah, who chairs the PAGD and is the patron of the National Conference, could represent them all.

However, Dr Abdullah responded that they had not been invited as the PAGD, but separately as individual leadeers. All those who have been invited should therefore, attend separately.

Omar Abdullah, the NC president, did not attend the meeting. He has been in Delhi for some time. Speculation in Kashmir has centred on whether he has engaged in talks while there. A former NC legislator claimed that he has.

Feedback from the ground indicates that Omar Abdullah is probably the single most popular leader across Jammu and Kashmir, although there has been no public unrest at all over the mass detention of politicians for several months from August 2019. Indeed, a great many young Kashmiris were pleased by it.

Mehbooba Mufti has regained some ground after taking public positions over rights issues during the past year, while the Abdullahs have largely kept a discreet silence. In fact, there was some surprised comment on social media when Omar Abdullah had tweeted earlier this year (before the second, very lethal, Covid wave) that more tourists should come to Kashmir.

Those who are going for the talks say they have no idea of the agenda, or how political processes are to move forward. They will see what the government has in mind.

When asked, Mehbooba Mufti added that they would of course put forward the basic demands of the Gupkar Declaration, for the restoration of statehood and the special constitutional provisions.

In addition to the PAGD leaders, Altaf Bukhari of Apni Party, and Sajad Lone and Muzaffar Beigh of the People’s Conference have been invited.

Of the PAGD partners, only the Abdullahs, Mufti, and Yusuf Tarigami, a member of the central committee of the CPI(M), have been invited. Muzaffar Shah of the Awami National Conference apparently hoped to receive an invitation later in the day. So did Javed Mustafa Mir of the Jammu & Kashmir People’s Movement, which former IAS topper Shah Faesal had founded. The CPI is also a part of the PAGD.

The focus, however, will remain mainly on the PAGD members. Not only are they the ones who need to be persuaded to reconcile after they were locked up for many months after the constitutional changes, they have demonstrated jointly through the district development board elections last winter that they have maximum support in the union territory.

They not only won a large majority of seats in the Kashmir Valley, they also won seats in the Chenab basin in the north and west of the Jammu division. 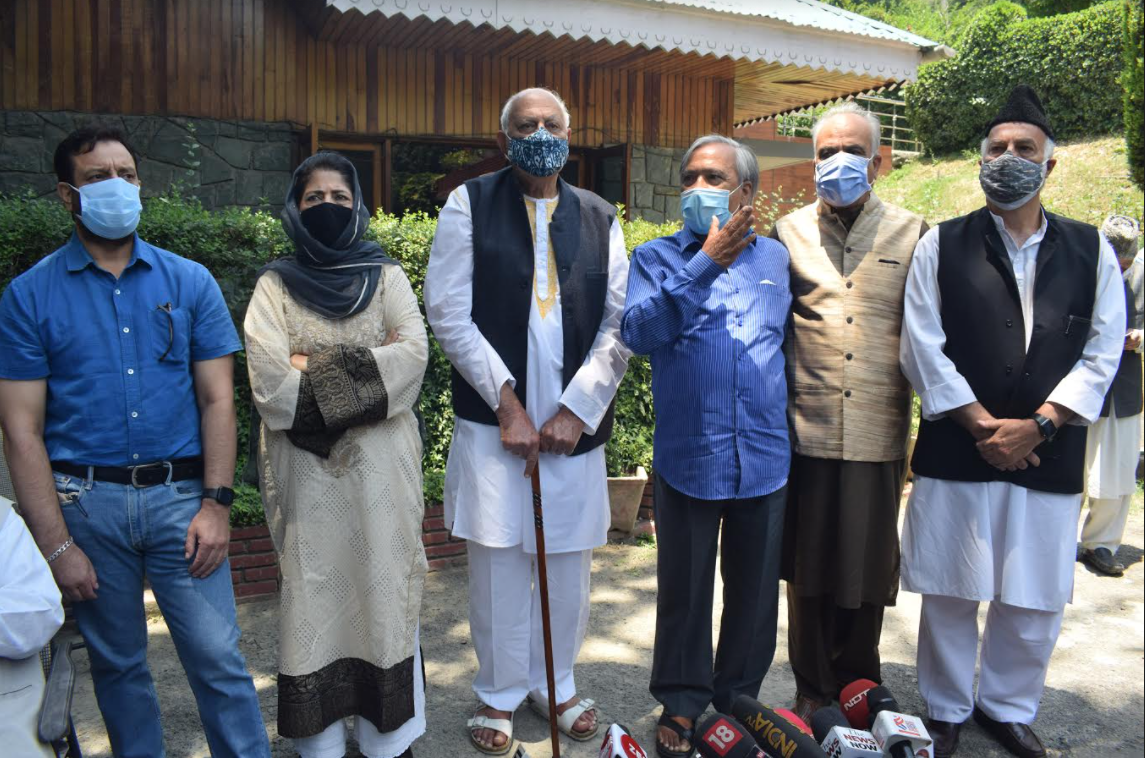