'Why Has Dissent Become so Intolerable, Justice So Out Of Reach'- Goodbye Stan Swamy

Activist Stan Swamy, a Jesuit priest and a tribal rights activist, one of the accused in the Bhima Koregaon case passed away at 1:30 pm on Monday at a Mumbai hospital.

The 84-year-old human rights activist was put on the ventilator last night when his health started deteriorating.

One of the doctors at the Holy Family Hospital, where Stan Swamy was under treatment for Covid-19, informed the Bombay High Court, which was hearing a bail plea filed by Swamy.

A week ago, Swamy had filed a fresh bail plea in the High court, after the Special National Investigative Agency (NIA) court had declined him bail under the Unlawful Activities Prevention Act (UAPA) Act.

In response to Swamy’s appeal asking for temporary bail on medical grounds, the High Court had directed the state government to admit him to a hospital, which Swamy had initially refused and had instead requested for release on interim bail.

D Souza from the Holy Family Hospital told the High Court today, “He has been with us. On July 4 early morning, he had a cardiac arrest. Then he was put on a ventilator. After that he never regained consciousness. Subsequent to that at 1.24 pm today, he was declared dead.”

In response, the Bombay HC bench, led by Justice S S Shinde, said: “With all humility at our command, we really are shocked by hearing this news. Therefore, last hearings we immediately allowed him to remain in the hospital of his choice. We have no words to express.”

Stan Swamy was arrested from his home by the NIA under the UAPA on 8 October 2020 for his alleged role in the 2018 Bhima Koregaon violence and for having links to the Naxals and the banned Communist Party of India (Maoist).

The event on December 31 2017, the eve of the 200th anniversary of the Battle of Bhima Koregaon, was followed by violence. It is claimed that activists had made inflammatory speeches and statements that led to the violence.

Time and again, activists and social groups have demanded an interim bail for the Bhima Koregaon 16 (the 16 key accused, including Stan Swamy) keeping in mind the lack of health infrastructure in prisons during Covid-19.

Politicians and activists have taken to Twitter to express their condolences and ask who is to be blamed for his death.

Rajya Sabha Member, Jairam Ramesh tweeted, “Who in the apparatus of the Indian state will be held responsible for this tragedy? Make no mistake — it is the Indian state that killed Fr. Stan Swamy, who was such a passionate crusader for social justice.”

Writer Dilip Mondal wrote, “It is the Indian state and collegium judges who killed Stan Swamy, who was such a passionate crusader for tribal rights and social justice. Rest in Power. We will remember you.” 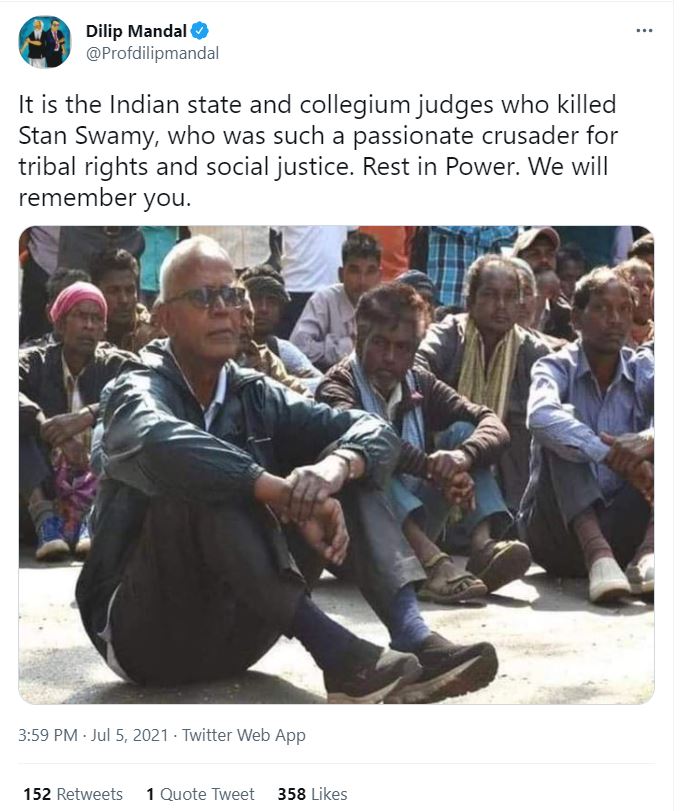