It was almost 40 years ago when Inder Kumar Gujral who later became Prime Minister of India had convened a meeting of the Opposition at his Maharani Bagh residence in Delhi. It was to oppose Indira Gandhi, who had returned as the PM after the Emergency debacle, and to work out an alternative at the centre of the motley regional groups. This was at a time when coalition politics was at its infancy and hence this meeting, despite the brief Janata experiment in governance, was significant.

All the top politicians of the time attended the meeting --there was Ramakrishna Hegde from Karnataka, Sharad Pawar from Maharashtra, Farooq Abdullah from Jammu and Kashmir, NT Rama Rao from Andhra Pradesh and of course Biju Patnaik and Chandrashekhar and Harkishen Singh Surjeet to name just a few of the stalwarts of the time. Surjeet was the general secretary of the CPI-M and a political tactician of no mean nature. Prashant Kishor, who seems to be the one enjoying that position today, is a novice in comparison. And of course not being a grassroot politician, visibly learning on the job.

The usual sceptical voices were raised, what is this going to achieve even those who participated asked. This marathon meet was followed pretty quickly by similar meetings in Bangalore, Srinagar, Kolkata. Indira Gandhi was assassinated, the violence against Sikhs destroyed the secular landscape of the country, and it was towards the end of the decade really that the Opposition leaders picked up the tempo again. And the rest is of course, history.

It did lead to BJP leader L.K.Advani telling some of us covering his party at the time, that these parties thought they “will isolate us but we will not allow that to happen.” And the clever old leader who has contributed immensely to raising the numbers for the BJP in the Lok Sabha with his well crafted politics went about working at coalitions, wooing regional parties, and ensuring the emergence of the National Democratic Alliance that brought Atal Bihari Vajpayee to power eventually.

The meeting at Congress leader Kapil Sibal’s residence last night reminded many of those who attended of the days of the older generation and the first such meetings that managed to create some kind of ‘coalition dharma’ as it were, with Omar Abdullah having replaced Farooq Abdullah, Naresh Gujral in place of his father IK Gujral and so on and so forth. It was at these first meetings set off by Gujral so many years ago, that the opposition parties confronted themselves with the possibility of an alliance based on a common minimum program at the centre, and a live and let live policy insofar as the states were concerned.

This worked to some extent with the National Front and later the United Front governments that saw V.P.Singh, Chandrashekhar, Gujral in power over the brief years they enjoyed power. But as sources who attended the meeting last night at Sibal’s residence said, they had soon come to realise that the impediment was the Nehru-Gandhi family that did not respect coalition politics, and did not hesitate to pull out support. The visible arrogance of the Family also came in the way of effective alliances, as it was clear to the Opposition leaders ---more grassroot than the Congress even then---that meetings with the larger national party meant acquiescence to its leadership.

This many leaders were not willing to do. And as the years have demonstrated, the reluctance still remains. More evident now with Naveen Patnaik steadfast in keeping away, and the others showing a certain reluctance as well. Samajwadi party’s Akhilesh Yadav who has tied up with Rahul Gandhi in the past, has moved away decisively for instance, insisting that he will not contest the forthcoming Uttar Pradesh elections with the Congress party.

So when Rahul Gandhi called a breakfast meeting for the Opposition just a few days ago, the attendance was not as desired by the Congress party. The Shiv Sena, Rashtriya Janata Dal, Trinamool Congress, DMK and Samajwadi Party attended along with the Left leaders ---but it was mostly the second rung. 15 political parties without Sharad Pawar attended.

The difference was stark at the Sibal meeting. One he is now part of what is popularly referred to as the G-23 group within the Congress who are still part of the party but have raised uncomfortable questions of the leadership, and demanded action to rejuvenate the Congress. This has placed them at the periphery of the party, as they are no longer seen by Sonia Gandhi as ‘loyalists’ ---an essential attribute for Congress leaders.

The line up, even though Sibal, is no longer a ‘ranking’ Congressman speaks volumes. Not just the entire Opposition (with the sole exception of the Bahujan Samaj Party) but the BJPs allies and friends also made their way to the dinner.

The 15 Opposition parties that had attended Rahul Gandhi’s meeting were all there but with top participation --Sharad Pawar from the NCP, Lalu Prasad Yadav from the RJD, Akhilesh Yadav from the SP, Jayant Chaudhary from the Rashtriya Lok Dal to name some. The additional parties were the Akali Dal, the Biju Janata Dal that has steadfastly refused to attend Congress led opposition meets till date, Telugu Desam Party and the YSRCP. As well as the Aam Aadmi Party. The Left leaders were there as well along with the Trinamool Congress.

G-23 members were present, including Ghulam Nabi Azad, Anand Sharma, Prithviraj Chauha, Bhupinder Singh Hooda and others. And the add ons here were PC Chidambaram and his son. All endorsing the meeting and the deliberations.

This has been by far the most successful Opposition meeting since the BJP came to power in 2014. It has brought together not just the regional political parties but also a sizable chunk of the Congress party that is prepared to move without the leadership of Sonia Gandhi and Rahul Gandhi as the need be. Sources said that some of the leaders did point to a coalition code, whereby political parties did not contest against each other in the states, and backed the main political party or combination to win against the BJP. They were clear that the intention was to defeat the BJP in the forthcoming elections and in 2024, so on this there was no quibbling. It was suggested that in UP for instance all the political parties should support the SP-RLD that are contesting an alliance, and not put up candidates to weaken them.

The meeting was sober and serious. And as the sources said, more should follow although the time and dates have not been set. As a political leader who participated said, “it was dynamic then, Gujrals first meeting was followed by the others, so it could well be this time again.” 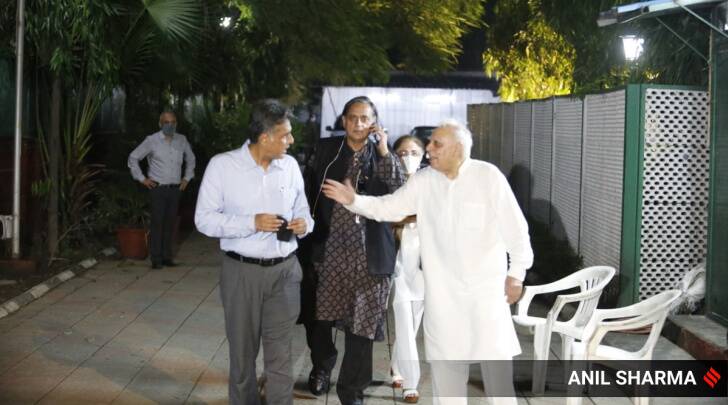