The cases lodged by Delhi police against hundreds of persons it arrested after targeted communal attacks last year are falling apart.

Few would have imagined the pace at which the Delhi High Court would deliver one stinging judgment after another to embarrass the Delhi police. No amount of changing police commissioners - three and counting in the past year - has changed their fate.

A slew of RTI queries about these arrests by journalists and civil rights activists also reveal critical gaps in the narration of the initial facts by police and later in its RTI replies, which read somewhat like afterthoughts.

Differences between police affidavits and RTI replies begin with the first day of the riots, with the former reckoning it as February 23. An RTI reply to a newspaper however states that the district police put the start “as per the report of all SHOs (Station House Officers/NED (North-East Delhi)” a day later on February 24.

The reasons for this discrepancy are not difficult to guess. As per newspaper records the first clash erupted on the afternoon of February 23, soon after AAP turncoat and BJP state president Kapil Mishra warned the police in a public speech to “remove” the anti-CAA protestors from near the Jaffrabad metro station, or they would be taught a lesson.

Not surprisingly Mishra’s name does not find a place in the report, even though the incident was widely reported.

Police figures also reveal that it has arrested more Muslims than Hindus – 933 as against 820.

The data assume importance given how Delhi Police special commissioner in the crime and economic offences wing Praveer Ranjan reportedly asked investigators on July 8 to exercise “due care and precaution” to avoid “Hindu resentment” while making arrests in riots cases, citing “intelligence input” about the arrest of “some Hindu youth from Chand Bagh and Khajuri Khas areas”.

The police have refused to provide the names of those arrested through RTI on the grounds that revealing “sensitive” information would have an adverse impact on investigations.

In Parliament during the first leg of the Budget session the Union Ministry of Home Affairs stoutly defended the Delhi Police, which it governs, against reports that it did not help Muslims being targeted during the violence, and prevented even the movement of ambulances to the injured.

There is also a blatant difference between the police and home ministry figures of the dead.

Minister of State for Home G. Kishan Reddy told three Rajya Sabha MPs in written replies on March 18 that, according to information received from the Delhi Police, 52 people were killed in the targeted violence.

Meanwhile Delhi Police public information officer and deputy commissioner for crime Joy Tirkey gave the figure of 23 deaths in writing on April 13 to an RTI activist.

There is a similar discrepancy in the number of arrests made by the police in connection with the riots.

Did a change of police commissioner bring down the figures, or is it a case of the right hand not knowing what the left was up to?

A look at the fate of only some of the cases dismissed by the High Court and sessions courts will shed some light on the answer.

On March 17 the Delhi High Court granted bail to four men arrested in a case as there was no evidence such as CCTV footage, video or photo. Justice Suresh Kumar Sait said that none of the four had been named specifically.

The judge noted that although four police officers were examined by the prosecution, none of them had called a PCR or made a DD entry.

Justices Siddharth Mridul and Anup Bhambhani said “it appears in its anxiety to suppress dissent and in the morbid fear that matters might get out of hand the state has blurred the line between the constitutionally guaranteed right to protest and ‘terrorist action’.”

Five days later Mohammad Furkan, arrested on allegations of murder, was released by additional sessions judge Vinod Yadav. The judge said that having spent one year in jail he could not be imprisoned any longer just because the other accused had not been arrested so far.

Then on June 30 Sagit Ahmad, Naved Khan, Javed Khan, Arshad, Gulzar, Mohd Imran and Chand Babu who were in jail on charges of attempted murder were released as they had been in jail for a whole year without trial.

ASJ Amitabh Rawat said in his order that the accused could not be incarcerated indefinitely as the conclusion of the trial would take a lot of time due to the pandemic. He declared that they had already spent a year in jail and hence they were being released on bail.

The release (even if on bail) of so many accused becomes all the more embarrassing because only in February this year, Delhi Police commissioner S.N Shrivastava was boasting at a press conference that the “extensive use of technologies like facial recognition,drone mapping, retrieving deleted data from electronic devices, CCTV footage, GPS, DNA and fingerprints had helped in arresting the accused in northeast riots, leading to the arrest of 231 accused.”

A former DCP of Delhi Police who is in touch with his colleagues told The Citizen on condition of anonymity: “I had a long talk with the advocate who represents Delhi Police recently and he admits that they were on a weak wicket. There are many reasons for this.

“One, there are very few cases where the evidence is given by the police themselves or the victims. It is mostly based on what in legal parlance is known as hearsay evidence, that is, someone else filed a complaint and their evidence is being torn apart by the courts.

“Secondly, most of the arrests are not for causing deaths or injuries but for sections on unlawful assembly during prohibitory orders. Getting bail for just being a part of an assembly is not difficult as it is not a cognisable offence, unless the mob has indulged in violence.”

The former DCP felt that after what happened with the 84 year old activist Father Stan Swamy, who died in custody after the Bombay High Court repeatedly denied him bail, the judiciary is also on the defensive and is changing its harsh stand.

He also hoped that the government and judiciary take a second look at the UAPA and sedition laws, cases under which are being dismissed by the courts every other day.

A crime reporter with a national daily actively reporting on these cases told The Citizen, “Half-baked cases based on CCTV footage, some even without that, are not going to stand scrutiny in courts. In some cases the police has gone with the evidence of anti-social elements of the area who had a score to settle with their rivals.”

According to advocate M.R Shamshad, who has been fighting for some of the survivors, “We have been saying from the very beginning that these cases were filed without proper investigation and evidence, and the courts have proved us right.

“You understand better than us how these cases had been filed by political bosses to discredit the anti-CAA protests which were going on peacefully.” 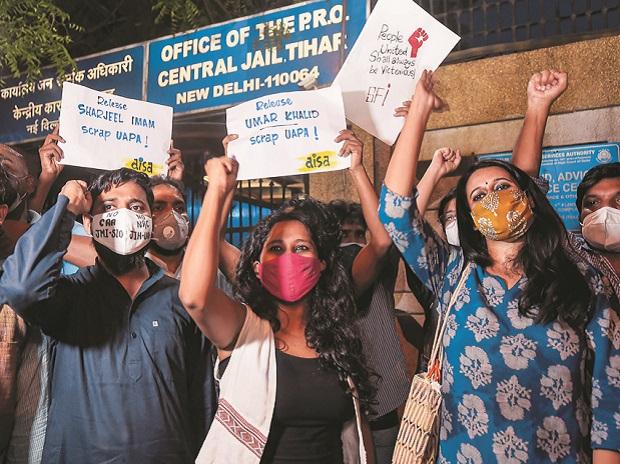