Writes to PCI and EGI

A few weeks after four journalists’ houses were unexpectedly raided under the UAPA (Unlawful Activities Prevention) Act - the start of a series of raids - Mehbooba Mufti, President of People’s Democratic Party of Jammu and Kashmir has written a letter to the Secretary of the Press Council of India and the Editor’s Guild of India. In this letter she has expressed disdain for the way the raids were conducted and urged the Press Council of India to send an independent fact-finding team to J&K to “verify these claims and take remedial action.”

“People at large, and especially the media of J&K, have been at the receiving end of this policy. Unwanted harassment of journalists has become a norm….” reads the letter, speaking of the repeated attacks the free press in India has come under, despite the fundamental rights of freedom of speech and expression.

23 J&K journalists have reportedly been raided and put on the Exit Control List, and their belongings have been confiscated, including - passports, phones, laptops and ATM cards. Mufti’s letter also mentioned that some young students on scholarship are also disallowed from travelling for their education- she cites the case of a young student who was made to deboard his flight, arrested, and then afterwards released.

The journalists have come under the microscope over “innocuous tweets:, Mufti said Their families too have been subject to investigation by the CID. She stressed that even outside of this specific incident, “a sizable number of journalists are either threatened or charged with sections under the UAPA or sedition law, simply because their reportage of J&K does not cater to the PR stunts of the ruling dispensation.”

In her letter, Mufti has also problematised the questionnaire that the journalists under investigation have been asked to fill out. She pointed out that “apart from asking very irrelevant and personal questions it is based on the assumption that their personal ties and loyalties lie with anti national networks.”

The document includes questions about parentage, property details, physical descriptors, political allegiance and proof of the same, peculiarities, relatives and associates in India, relations or acquaintances in Pakistan, among others in a list of 25 questions.

“One had hoped that the Press Council of India would take a suo moto note of these widely reported incidents but it seems that no established watchdog forum, including the courts, has taken any interest in the painful circumstances created in the J&K, not to speak of any interventions,” Mufti stated , taking it upon herself to ask that a fact-finding team be sent to J&K to properly investigate the claims.

The letter states that these raids and confiscations are still ongoing. “Reporting truth to power is being criminalised with every passing day.”

Mufti also recalled in her letter the “harrowing experiences” faced by the J&K journalists following the abrogation of Article 370.

According to Mufti, “There have been issues and disagreements between the State and media, but never before has the freedom of expression been virtually guillotined in any part of the country as it has been done in the J&K in the past three years.” 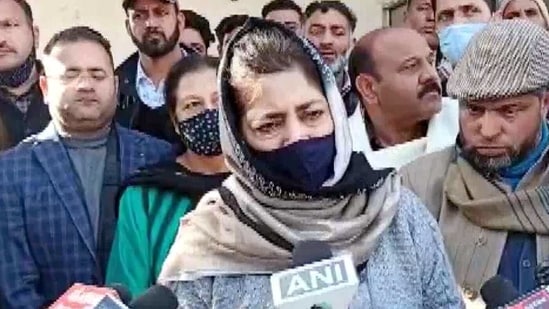