The events that have followed the gruesome killing of Lakhbir Singh allegedly by some Nihangs at the Singhu border place the Union government in the dock, with farmer groups and experts pointing to the role of government agencies in the macabre killing, and some damning revelations and demands raised by family members of the deceased.

In a fresh development, on the directions of Punjab’s Deputy Chief Minister Sukhjinder Singh Randhawa, the state’s Director General of Police Iqbal Preet Singh Sahota has constituted a Special Investigation Team to probe the allegations made by Raj Kaur, sister of Lakhbir Singh.

The SIT has been constituted under Additional Director-General of Police and Director, Bureau of Investigation for Punjab Varinder Kumar, with Deputy Inspector-General for Ferozepur Inderbir Singh and Senior Superintendent of Police for Tarn Taran Harvinder Singh Virk as members.

Raj Kaur has stated that her brother Lakhbir Singh of Cheema Kalan village in Tarn Taran was allured by some unknown persons and taken to Singhu border, which is a protest site of agitating farmers, where he was murdered by some Nihang Sikhs on October 15 on charges of sacrilege.

It was a story in the Tribune that pointed towards the possible role of Baba Aman Singh, leader of a Nihang sect based in Ontario in Canada, in efforts by the Union government to end the farmers’ stir. Four members of this group have reportedly been held for the killing.

Then there have been reports of Baba Aman Singh claiming that he was offered Rs 10 lakh cash and horses for vacating the Singhu border dharna site. He said the top leaders of the sect will meet on October 27 in New Delhi to decide whether to continue their dharna at the Singhu border.

The Baba reportedly added that they were fighting a religious war for justice in the sacrilege incidents and not sitting on dharna for the farmers.

Bir Devinder Singh, a senior Punjab politician who is an authority on the religio-political domain told The Citizen that the entire episode is the handiwork of government agencies to defame the farmers’ agitation that has been getting support from all corners, and to add to the confusion among the people.

He pointed out that there are more questions than answers in the entire episode:

He further pointed out that it was certain that if the element “entrusted” with the job of bringing the holy texts was caught he would definitely have been punished, and if he had managed to “steal” the texts it would simply have added to the confusion.

All this would have simultaneously brought a bad name to the farmers’ agitation.

“The farmers’ leaders handled the issue with great maturity. Now the photos have exposed the government. Punjab has seen the way agencies function in the past very well,” he added, saying it is now the job of the SIT to trace the calls made to Lakhbir Singh and to come out with the facts threadbare.

However, the Dal Khalsa which is known for its radical politics pursued through democratic means has while welcoming the SIT under an “upright official” expressed doubts over how much of the truth will be allowed to come out.

It has said that the whole episode of allurement of Lakhbir Singh and subsequent violence needs to be thoroughly probed, questioning whether the BJP leadership was ever interested in resolving the farmers’ issues, saying that party leaders were always trying to sabotage it and make it fizzle.

The group’s spokesperson Paramjit Singh Mand has condemned efforts to give a caste twist to the entire episode:

“It is wrong and dangerous to portray the killing at Singhu border as a Sikhs versus Dalits issue. The killing is the fallout of the failure of the Indian justice system. These politicians giving a caste twist are actually playing mischief, with a design to create a wedge between Sikhs and Dalits,” said Mand.

He said that Raj Kaur’s statement that her brother would often talk with some “Sandhu sahib” and claim that he had developed contacts with the “higher ups” points towards a deep rooted conspiracy.

Meanwhile the Samyukta Kisan Morcha leading the farmers’ movement has reiterated its demand for a thorough investigation into the murder.

“As more news emerges about a group of Nihang Sikhs having met Union agriculture ministers in the presence of other people with dubious antecedents, and even the offer of money for leaving the morcha sites, SKM reiterates its demand for a comprehensive investigation into the conspiracy related to Singhu Border brutal murder on October 15.

“While the attempt to tarnish the image of the farmers' movement has not succeeded, the true story behind the whole episode has to come out to reveal to the world what the BJP is up to. The SKM once again appeals to all constituents to stay focused on the peaceful struggle of farmers to secure their main demands,” it said.

There are also reports of the Shiromani Gurdwara Parbandhak Committee deciding to set up a three-member panel to visit the spot and carry out an investigation.

SPGC chief Bibi Jagir Kaur has reportedly raised a pertinent point: how mostly, cases of sacrilege get closed after the culprits are declared “mentally ill” or under the influence of intoxicants, while avoiding to go deeper to unveil the truth.

It is well remembered how initially the farmers’ movement was painted as one harbouring Khalistani elements. The episode of some elements planting a Sikh religious flag on the Red Fort below the national tricolour on Republic Day was also given the Khalistani colour in what is seen as an attempt to derail the secular movement.

It remains to be seen how much truth emerges in the public domain. 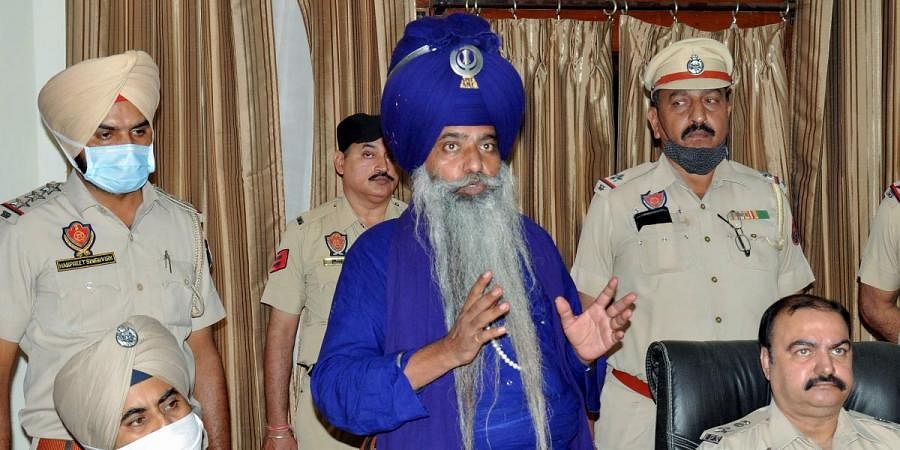