500 farmers to drive to Delhi every day during Parliament session

The farmers are all set to expand their movement and take it to different state capitals across the country. This starts with a demonstration in Mumbai on November 28, on the eve of the winter session of Parliament.

A massive Kisan-Mazdoor Mahapanchayat is planned at Azad Maidan in Mumbai. The event will be jointly hosted by over 100 organizations under the Samyukta Shetkari Kamgar Morcha (SSKM).

According to All India Kisan Sabha (AIKS) president Ashok Dhawale several issues will be added to the core demand for the repeal of the three controversial farm laws. “The Mahapanchayat will denounce the central government on all fronts and will raise several burning issues of the working people, including the repeal of the farm laws and labour codes, a central law to guarantee a fair minimum support price (MSP), halving the price of diesel, petrol and cooking gas and a halt to privatization and selling off the country for a pittance,” Dhawale said.

November 28 is the death anniversary of one of the earliest champions of the peasantry in India and an inveterate opponent of the caste system and women's oppression, Mahatma Jyotirao Phule.

The ashes of the Lakhimpur Kheri martyrs will be immersed in the Arabian Sea at the Gateway of India on the evening of November 28 after taking them to Hutatma Chowk, which commemorates the 106 worker and peasant martyrs of the Samyukta Maharashtra Movement in the 1950s.

The event at Mumbai is being projected as the ‘trigger’ for the expansion of the farmers movement towards south India.

“There is no doubt that the ongoing struggle of the farmers is heading towards becoming a national movement,” Narayan Dutt of Inquilabi Kendra Punjab told The Citizen. He has been instrumental in mobilizing the participation of people in the movement.

Meanwhile the SKM has decided that from November 29 onwards till the end of the winter session of the Parliament, 500 selected farmer volunteers will move every day to Parliament in tractor trolleys peacefully and with full discipline, to assert their rights to protest in the national capital. This is to increase the pressure on the central government and compel it to concede the farmers' demands.

At a meeting held at the Singhu Border protest site, the SKM decided to observe one year of the ‘historic farmers' struggle in India’ on and after November 26 on a large scale all over the country.

November 26 is also Constitution Day when the Constitution of India was adopted by the Constituent Assembly in 1949. The day also marks one year of the all India strike by the working classes last year.

The SKM announced that there will be mass mobilisation of farmers and others on this anniversary from Punjab, Haryana, Uttar Pradesh, Uttarakhand and Rajasthan at all the Delhi borders. Large meetings will be held there.

A call has also been given for organizing massive maha panchayats in state capitals on November 26 as part of the first anniversary of the farmers' stir.

The SKM while referring to a study by Lakhwinder Singh, former professor of economics and Baldev Singh Shergill, assistant professor of social sciences at Punjabi University has stated that most of the farmers who died in the farmers’ movement have been small and marginal farmers. “The average acreage of the farms owned by those who lost their lives is 2.26 acres. This study demolishes the oft-repeated claim that those behind the farm movement are rich farmers,” the SKM has stated.

“The farmers’ movement has been expanding at a very fast pace after the Bharat Bandh of September 27. A major issue fuelling the support is the spiraling inflation which is no longer just threatening the livelihood of the people but their very survival,” AIKS leader in Haryana Inderjeet said.

Haryana continues to witness pitched battles between the farmers targeting the BJP leaders along with those from the Jannayak Janata Party (JJP) and the administration. Currently the farmers are sitting in dharna outside the Superintendent of Police’s office in Hansi in Narnaund for taking back the cases against two farmers for showing black flags and registering a case of assault against BJP MP Ram Chander Jangra. Thousands of farmers and farm leaders joined the dharna.

“Haryana is a state where the farmers’ agitation has spread all across. If they allow the farmers to dictate the narrative,they feel it will be seen as a defeat, a perception that the government cannot afford,” Narayan Dutt said. 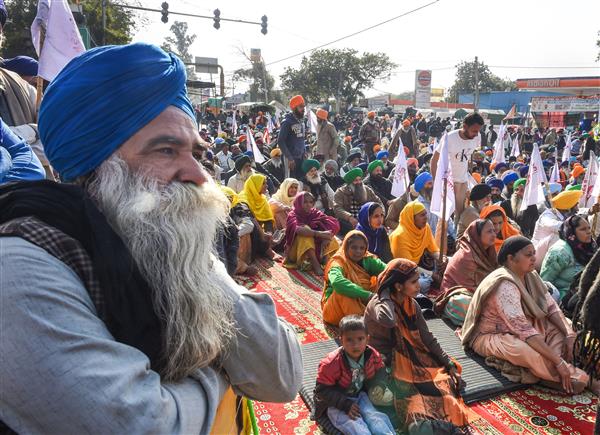