All in a Flux as Punjab Gears Up for Assembly Polls

Fluid political scene as dots remain to be crossed

With hardly two months to go for the state assembly polls, the political scenario in Punjab not only continues to be highly fluid but has new dimensions being added regularly. This ensures the polls this time around are going to be very different.

The Bharatiya Janata Party has hurt the Akalis by inducting a former president of Delhi Sikh Gurdwara Management Committee (DSGMC) Manjinder Singh Sirsa who was also a close confidant of SAD president Sukhbir Singh Badal. This move has a lot of importance in the Sikh religio-political matrix as DSGMC is the second most important statutory body of the Sikhs after the Shiromani Gurdwara Prabandhak Committee.

Perceived to be largely a party of Hindus while pursuing Hindutva, the BJP that had been looking for credible Sikh faces then moved on to bring in another former Akali MLA and senior leader Sarabjit Singh Makkar along with former Director General of Police (DGP) SS Virk.

This comes on the heels of former chief minister Captain Amarinder Singh announcing that his Punjab Lok Congress (PLC) will be contesting the polls in alliance with the BJP and the Akali Dal (Sanyukt) led by former SAD leader Sukhdev Singh Dhindsa.

“No matter how this alliance fares, the message that has gone out is that the BJP is no longer untouchable in Punjab as it was made out to be. The motives of the allies are surely different. Amarinder Singh is looking to avenge his humiliation from the Congress party as he made it clear in his attacks on state Congress chief Navjot Singh Sidhu. The BJP would be very happy in the event of a hung house with the fate of the Congress, the Aam Aadmi Party (AAP) and the Akalis hanging fire,” sources in Chandigarh said.

With its Dalit Chief Minister Charanjit Singh Channi in the saddle, the Congress continues to grapple with problems that have come to be identified with the party. The party chief Navjot Singh Sidhu continues to keep the party and the government on tenterhooks with his set of demands that range from action in cases of sacrilege of holy texts to drug smuggling to pushing forward the demand for opening cross border trade with Pakistan.

Maken’s appointment has come under sharp attack from Amarinder Singh. “The Congress party should have avoided naming someone like Maken, as the name itself draws derision and revulsion in Punjab for the involvement of his late uncle in the anti-Sikh riots where innocent victims were burnt alive to death,” Singh said.

Meanwhile Channi has been trying to woo the electorate with sops being announced on a daily basis while taking on the political rivals in his speeches. He has been particularly hard on the Badals and Amarinder Singh as the party has been trying to hold the latter responsible for the delays in delivering what was promised before the last polls because of his ‘connivance’ with the Badals.

The Akalis continue to grapple with their failure to revive after being pushed to the third place in the last assembly polls. This is an issue of concern to many who feel that Punjab needs a strong force like SAD that has been India’s oldest regional party and in the past has been at the forefront of raising issues of federalism besides being viewed as a force representing the Panth and hence Punjab.

When the Congress chief Sidhu threatened to go on a fast seeking action against those responsible for sacrilege and drug smuggling, the Akalis came out in strength to court arrest outside the residence of the chief minister while accusing the Congress of resorting to vendetta politics.

Sukhbir Badal accused Sidhu of resorting to extra constitutional measures by directing the state government to register a false case against former minister Bikram Singh Majithia. “The chief minister and the home minister have not only agreed to this demand in order to divert attention from the failures of the Congress government but have also directed the DGP to register the false case. The SAD is very clear in this matter. All such persons will be prosecuted once the SAD-BSP alliance government is formed in the state. We will also establish a commission to probe these false cases, including those registered against Akali workers,” he said.

During his recent visit he said, “Women of our country, including Punjab, are very hard working. Rs.1000 per month is for their empowerment and to make them financially stronger. When previous rulers and political leaders, who have embezzled millions and billions of taxpayers' money, have not become lazy and are still looting Punjab, then how come just Rs.1000 per month will make my mothers and sisters slackers?”

AAP has been trying to tap the space that is available for a third force in Punjab politics as the people are disillusioned with voting the traditional parties. But it faces the challenge of lacking a credible chief ministerial face from the state and a strong presence in the Majha region.

Observers say that till now, the party has stayed clear of hobnobbing with hard line elements, a folly for which it had paid heavily in the last polls. It also remains a formidable force in the Malwa region of the state. 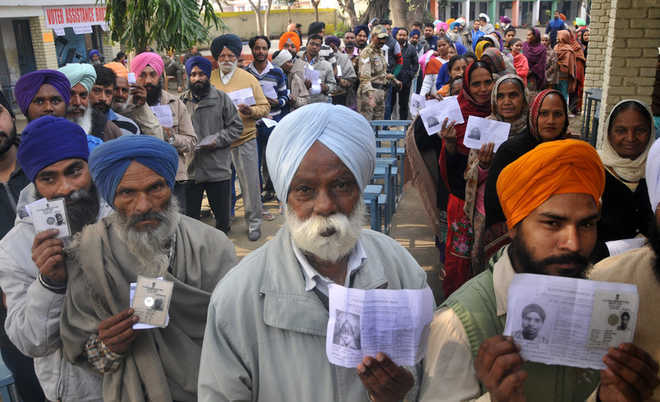