Farmers to Withdraw From Protest Sites Tomorrow in Victory Rallies

‘Dilliye ni jit ke Punjab Challeya’ (O Delhi! Punjab returns victorious) echoes the sentiment in Punjab today. The song is of the farmers' stir, and how democratic forces comprising people from all walks of life have made history by compelling the central government to not only withdraw the three ‘black farm laws’ but to concede most of the other demands as well.

The Samyukta Kisan Morcha (SKM) lifted the protest after it received a formal letter through the Secretary, Ministry of Agriculture and Farmers' Welfare agreeing to the farmers pending demands. The battle has been won, the farmers announced, with the government following the repeal of the three laws with MSP and the withdrawal of all cases filed during the one year against the farmers in different states.

With the country mourning the demise of Chief of Defense Staff (CDS) Bipin Rawat and his associates, the farmers have postponed victory celebrations till December 11 when they plan to leave the protest sites together in victory rallies.

The farmers believe that political compulsions, the inability to divide the masses, failure to tire out the protestors and success in convincing the corporates to backtrack, at least for the time being, led to the government buckling on almost all the issues.

“The recent by-poll results were a clear warning they could read. To make matters worse for them, the movement was continuously spreading. All their machinations had failed. They could neither divide the people nor suppress them by using force. They also failed to tire out the people. They also seem to have succeeded in convincing the corporate for a ‘tactical retreat’ if nothing else. This has been a government that had bulldozed the neo liberal agenda with brute force and blindness as compared to the ones before it. This was combined with communalism,” explained Inderjeet who is an All India Kisan Sabha (AIKS) leader from Haryana.

“But the fear of a rout in the forthcoming Uttar Pradesh and other state assembly polls to be followed by the parliamentary polls in 2024 were also gaining credence. In addition to this, the falling apart of the National Democratic Alliance (NDA), particularly in the context of the allies from the south, was also a worry. Then there has been a crisis developing within the Bharatiya Janata Party (BJP) that threatened to turn into a full blown storm as the leadership of the top duo in the party is now shaky as ‘Jumlebaji’ cannot work all the time. The biggest concern however was that if the SKM got down to campaigning in the villages of Uttar Pradesh, the damage would have been unimaginable,” he added.

Echoing his view, Kanwaljit Khanna who has been organizing the people in areas around Jagraon in Punjab said, “The government going in for acceding to the demands of the farmers is a damage control exercise. The failure to either tire out or divide the people played a major role in the people’s victory. The pressure of the masses on the farmers’ leadership was also immense and any compromise would have meant their not being allowed inside the villages of Punjab.”

The letter from the government shared by the farmers on the contentious issue of MSP states that Prime Minister Narendra Modi and also Agriculture Minister Narendra Singh Tomar have announced to constitute a committee comprising representatives of central and state governments along with those of farmer organizations including SKM and agriculture scientists. The mandate of the committee will be to ensure how MSP can be ensured to the farmers. Meanwhile the procurement under the existing MSP will continue.

Various state governments have agreed to withdraw cases registered against the farmers while the remaining will be urged by the centre to do so.

The governments of Haryana, Uttar Pradesh and Punjab have agreed on compensation for the families of those who died during the agitation. It has also been agreed that the proposed bill on power will be introduced in the parliament only after consultation with farmers and other stakeholders.

The letter further states that as far as the law on stubble burning goes, the farmers are exempt from criminal liability.

The SKM has dedicated the ‘fabulous and historic’ victory of the struggle to around 715 martyrs, including those in Lakhimpur Kheri.

“Farmers' unity, peace and patience has been the key to the victory and this will not be allowed to erode in any circumstance, vow the farmers. The SKM decides collectively to stay alert and ensure that promises are kept,* it said in a statement.

To ensure that the Government of India is keeping to its commitments and to chart out future course of action, the SKM will be meeting in Delhi on January 15.

The statement further said, “The SKM thanks local communities at morcha sites profusely for their patience and support throughout the long agitation, and apologies to them for inconveniences caused to them. The SKM also thanks trade unions, women's organizations and youth/student outfits who struggled along with farmers in this agitation, lawyers who extended legal aid and solidarity, doctors who set up medical camps and gave their untiring services, various religious bodies that set up langars and fed the protestors unconditionally and uninterruptedly, various progressive organizations that stood in support including human rights groups, numerous artists who were there constantly with the movement, numerous organizations that continuously and consistently responded to SKM calls for action, highway dhaba owners and people who gave space for the Kisan Andolan to run its organizational meetings, NRIs and international farmers' organizations and others who took up solidarity actions in their own locations, hundreds of volunteers who participated by giving their sewa and many others including well wishers.”

Meanwhile, preparations are on across Punjab, Haryana, western Uttar Pradesh and elsewhere to welcome the victorious farmers in style. Sources on the ground said that the farmers will return to the villages amid celebrations marked by distribution of sweets and lighting of lamps.

“After moving from Delhi protest sites on December 11, the cavalcades of the farmers from Punjab will halt at the state borders of Shambhu and Boha. The next day, while those reaching their respective villages will disperse, the remaining will make small halts at all the protest sites on the route like toll plazas, railway stations etc where they will be welcomed in style. On December 13, the farmers’ leaders are expected to go to Harmandir Sahib in Amritsar and pay obeisance there. On December 15 there will be celebrations at various protest sites across Punjab,” Kanwaljit Khanna said. 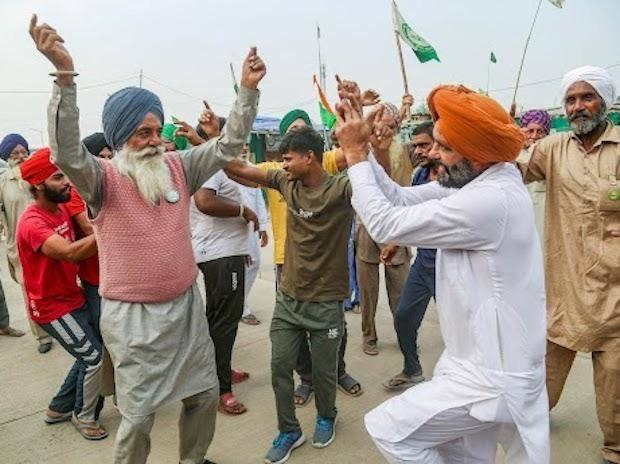