A politician known for never giving up

In the political circus that is ongoing in the poll bound hill state of Uttarakhand, it is veteran Congress leader Harish Rawat who stands out as ring master for now. This is a state that has been exceptional in providing political entertainment right from its inception given the maverick behaviour of many of its politicians cutting across party lines. In scenarios like this it is the experienced and grounded leaders like Harish Rawat who have the last laugh. And this is precisely what is happening once again.

In a state known for alternating between Bharatiya Janata Party and Congress led regimes, Harish Rawat stands tall at this point as the BJP government now under Pushkar Singh Dhami faces an uphill task in the approaching polls.

Having seen three changes of chief minister in the last five years, voters are thoroughly disillusioned with the much promised ‘Double Engine’ growth oriented government promised by the BJP back in 2017, when the party riding on a Modi wave trounced the Harish Rawat led Congress to win 57 of the 70 seats, reducing the Congress to a mere 11.

Rawat himself lost from both the seats of Haridwar (Rural) and Kitcha that he had contested. But he is a politician known for never giving up, and has once again resurrected his party’s fortunes.

Having risen through the party ranks, Harish Rawat has been a field politician throughout. Right from the day the BJP government was elected to power in 2017 under Trivendra Singh Rawat, he got down to the task of engaging with people on issues important to them.

In the last five years he was engaged in a two-front battle against the BJP government on one hand and his detractors within the Congress on the other. Today, he stands out as the only Congress leader with a pan Uttarakhand image with whom people connect right from Uttarkashi to Dharchula.

All this while showing his political acumen with aplomb and managing to achieve his goals. He has got his men in key positions within the organization: incumbent state Congress chief Ganesh Godiyal is his close confidant. Observers say that he is now trying to ensure that candidates of his choice get the party ticket to contest, and though the Congress hasn’t yet declared him its chief ministerial face, they say he is the obvious choice if the party romps home as most of the MLAs would be his men.

In the process, Harish Rawat has also cut to size people within the Congress as well as the turncoats aiming to return to the party after jumping over to the BJP last time round. While he has facilitated the re-entry of six-time MLA Yashpal Arya and his son Sanjeev Arya, he has ensured that former minister Harak Singh Rawat stands politically decimated even if he does somehow manage to return to the Congress fold in the days to come.

After the Congress move to appoint a Dalit head of government seemed to pay off in Punjab when the party anointed Charanjit Singh Channi to the post of chief minister replacing Amarinder Singh, the return of Arya, who is from a Schedule Caste background unlike Dhami and the Rawats was seen as a positive step.

But it is Harak Rawat’s story that has turned heads and will be a case study in Indian politics in time to come. A maverick with an impeccable record of ensuring poll victories, this Rawat had jumped the fence to the BJP ahead of the last polls. And was again throwing his weight around in the BJP looking for a change to the safer constituencies of Kedarnath and Doiwala. He had earlier threatened to quit his ministerial post seeking more funds for a Kotdwar Medical College only to be placated by Dhami. And had also been seeking a ticket from Lansdowne for his model and actress daughter-in-law Anukriti Gosain.

Evaluating the present political milieu where the Congress has an edge, Harak Rawat had started confabulations with the Congress leaders within earshot of the BJP leadership as a tool to pressure the latter. Yet his efforts to rejoin the Congress were stonewalled by Harish Rawat, who reportedly wanted him to publicly apologize for switching sides in 2016 along with nine others.

Meanwhile, Harak Rawat did not attend the BJP core committee meetings to finalize candidates. He went to Delhi ostensibly to meet party leaders Amit Shah and JP Nadda but reports say he instead landed at the doorsteps of the Congress leadership. In a quick move, the BJP divested him of his ministerial berth and party membership leaving him with no bargaining chips. Known for his theatrics, he has since been breaking down on television channels saying he will work for the Congress even if he is not fielded.

Although Harish Rawat’s detractors would want Harak Rawat in the party, with the former calling the shots the latter’s fate hangs in limbo.

Another interesting development has been the Congress divesting former state unit chief Kishore Upadhyay of all party positions for alleged anti-party activities.

Upadhyay had been reported meeting Samajwadi Party leader Akhilesh Yadav and BJP election in-charge for Uttarakhand Prahlad Joshi over the last few days leading to speculation that he was planning to depart. He had also started a verbal duel with Harish Rawat accusing him of ensuring his defeat from Sahaspur in 2017. Rawat refuted the charge saying that as party state chief Upadhyay had himself preferred Sahaspur over his native Tehri constituency.

Last month Harish Rawat had also stunned the Congress high command when he expressed displeasure over not being allowed a free hand. He took to Twitter to say in Hindi that “the representatives of those who have ordered me to swim are tying my hands and legs.” Was it time to rest? he went on to wonder. Gauging trouble, the high command was quick to make him chair of the campaign committee.

Harish Rawat’s political journey has not been easy. He entered the Lok Sabha back in 1980 defeating the BJP’s Murli Manohar Joshi from Almora. He went on to lose several elections between 1991 and 2009, when in that year’s Lok Sabha polls he switched from Almora to Haridwar to register a landmark victory from a seat where the Congress was nowhere in the picture with the Samajwadi Party and Bahujan Samaj Party dominant. Rawat won that election by more than 3.3 lakh votes.

He went on to become chief minister in 2014 replacing Congress incumbent Vijay Bahuguna a year after flash floods had devastated the hill state. And then lost from both constituencies he contested in 2017.

The Congress has meanwhile witnessed the flight of its women’s wing president Sarita Arya to the BJP as she was reportedly unhappy with the return of Yashpal and Sanjeev. Sanjeev Arya is the sitting MLA from Nainital having won on a BJP ticket. He is expected to be fielded by the Congress this time from Nainital which was represented by Sarita Arya in 2012. 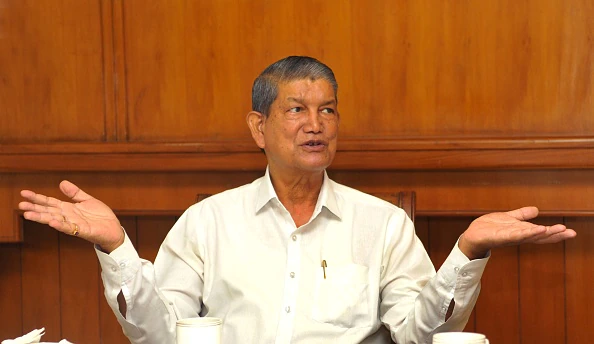